The Indiana Court of Appeals has taken the rare step of rescinding its Nov. 10 ruling that held the Gary Housing Authority failed to follow statutory requirements when it acquired through condemnation a since-demolished restaurant building at 624 Broadway.

In an order issued Thursday, Indiana Court of Appeals Chief Judge Cale Bradford said the original decision is withdrawn and vacated, must be removed from the court's website, and a substitute opinion will be issued "in due course."

The order indicates the three appellate jurists who heard the case — Judge Paul Mathias, Judge Elizabeth Tavitas and Judge Leanna Weissmann — concurred with the decision to withdraw the ruling.

At the same time, the order does not specify why the ruling has been withdrawn.

It's unusual for the appeals court to disown a decision on its own initiative. Typically, the court only will consider the possibility that it erred after a litigant files a petition for rehearing identifying a potential legal mistake.

In this case, the order to withdraw the ruling came three days after an article in The Times suggested the appeals court may have mistakenly applied the 2021 version of the eminent domain statute, instead of the statute in effect when the case commenced in 2019.

The distinction matters because the appeals court said the housing authority was required by Indiana law to mail notice of the proposed acquisition to the property owner, and twice publish notice in a local newspaper, at least 30 days prior to the public meeting where the authority intended to take the property.

However, the statute in effect at the time of the taking did not mandate mailed notices to the property owner and required only 10 days between newspaper publication and public hearings.

Records show former property owner John Allen was in the midst of renovating the building into the Nations Restaurant and Bar when the property was acquired by the Gary Housing Authority.

The housing authority last year tore down the building, as well as the other structures in the 600 block of Broadway, as a prelude to constructing a new, mixed-use housing development on the block. 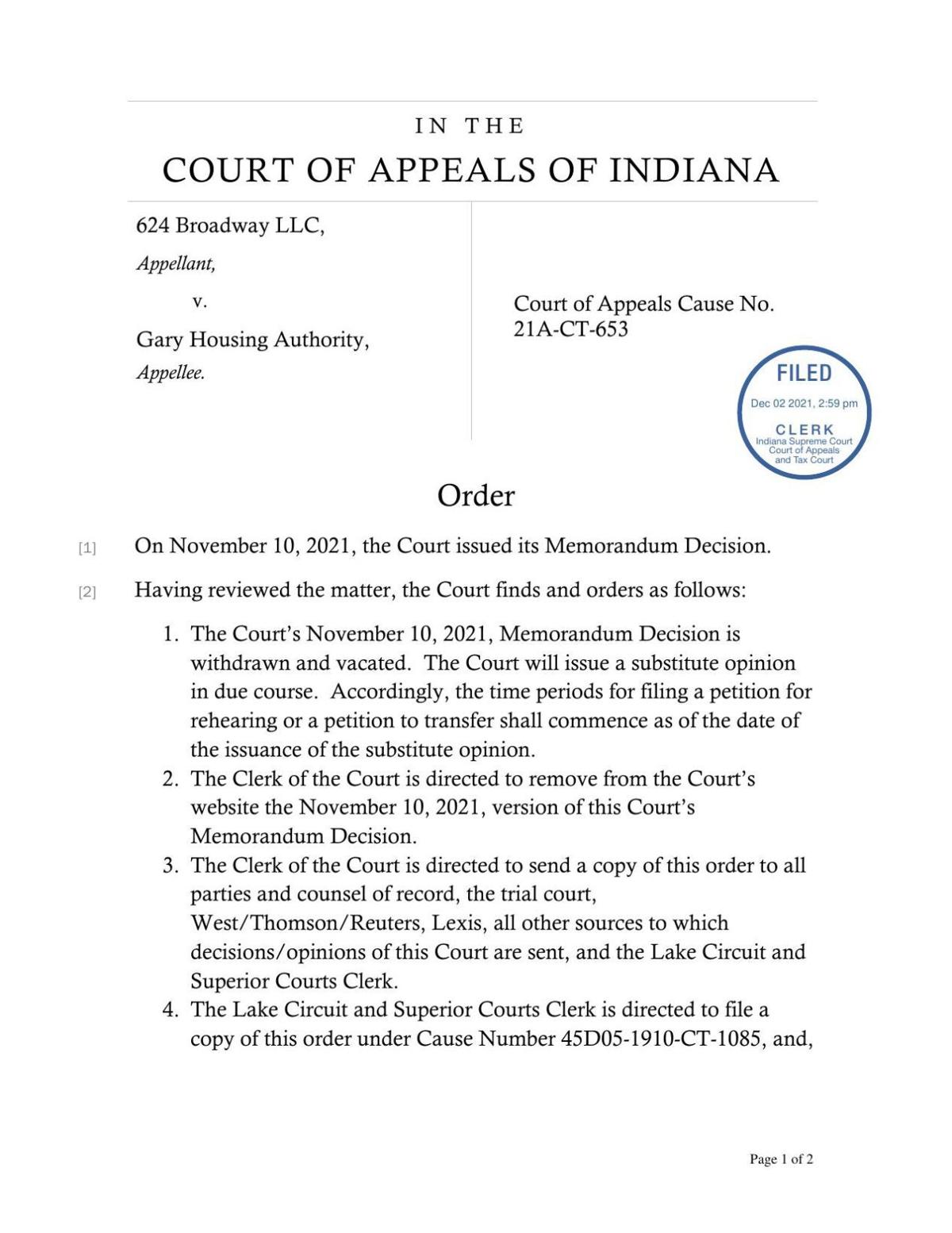 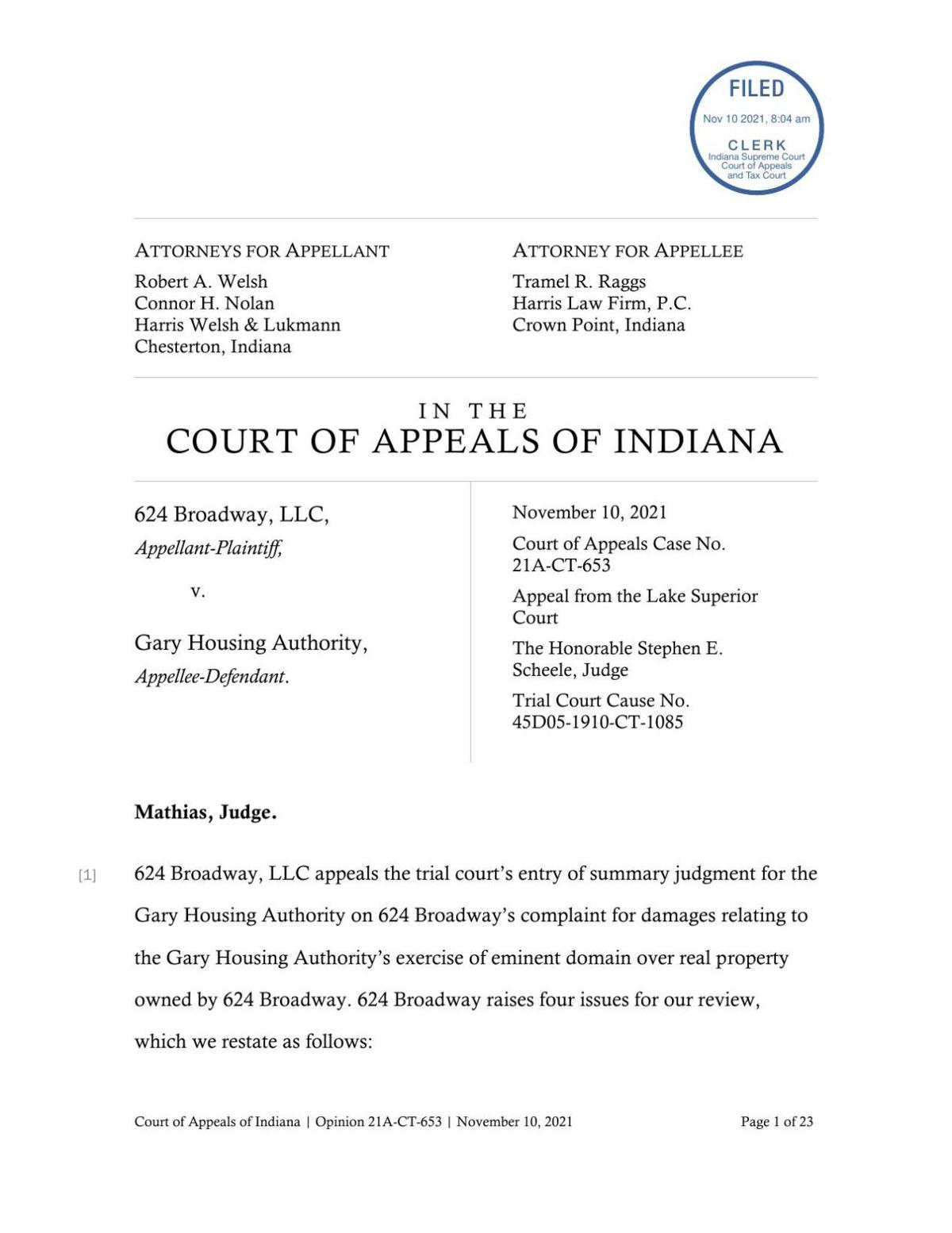 Since 2013, Gary's Service Sanitation has been celebrating the holiday season with its Jingle John shows in which festively lit porta potties sing Christmas carols. The one-of-a-kind holiday light show has performed at the Lincoln Park Zoo, Lucas Oil Stadium in Indianapolis, and many holiday parades around Northwest Indiana and greater Chicagoland, drawing media coverage from across the country.

The Jingle Johns engage in a rap battle in 2019

The Jingle Johns get funky with "Disco Santa" in 2018

Another 6,164 Hoosiers were diagnosed with COVID-19 on Tuesday, up 113% from 2,898 confirmed daily infections three weeks ago.

The Indiana Economic Development Corp. is poised to distribute by the end of the month some $500 million in federal economic stimulus funds in the form of READI grants.

Four commissioner maps and three council maps were submitted by Monday's deadline to the bipartisan Indiana Election Commission the General Assembly has put in charge of Lake County redistricting.

Free holiday celebrations set for next two Saturdays in Gary

Families living in and around Gary have the opportunity to celebrate the holiday season with food, songs, gifts and entertainment over the next two weekends.

A parent can now seek damages from a child caretaker when the parent discovers the caretaker unquestionably sexually abused their child and that abuse severely impacted the parent's emotional health.

The state appeals court has once again vacated the Gary Housing Authority's administrative taking of 624 Broadway and ordered the Lake Superior Court to conduct further proceedings.