An East Chicago man who shot and wounded a Hammond man in a 2018 drug deal gone wrong is not entitled to any reduction in his 14-year prison term, the Indiana Court of Appeals has ruled.

Dashone Woods, 40, pleaded guilty last year to aggravated battery, a level 3 felony, after going to an apartment in the 500 block of Pointe Drive in Hammond to purchase marijuana and shooting a 27-year-old man in the torso, according to court records.

Those charges were dropped as part of the plea agreement.

In his appeal, Woods argued his 14-year sentence is inappropriate because his crime was insufficiently egregious for Lake Superior Judge Jamise Perkins to depart from the nine-year advisory prison term for a level 3 felony to impose almost the maximum 16-year sentence.

Woods also claimed the trial judge failed to take into consideration his post-traumatic stress disorder (PTSD) diagnosis when deciding his sentence, according to court records.

The appeals court was unpersuaded. It unanimously rejected all of Woods' claims in a 3-0 decision written by Judge James Kirsch.

As to the nature of the offense, Kirsch noted Woods not only shot the victim in the torso, he battered the victim with the gun and stole his cookie dough, all while in the process of trying to purchase marijuana, an illegal drug.

Moreover, Kirsch said Woods committed the crime while he had charges pending in another criminal case and was on electronic monitoring while awaiting trial.

"The foregoing facts not only establish that Woods' crime was egregious, they also show that Woods has failed to present compelling evidence that portrays the nature of his offense in a positive light, such as by providing evidence that his offense was accompanied by restraint, regard and lack of brutality," Kirsch said.

Concerning Woods' character, Kirsch observed that Woods has a significant criminal record, including three prior felony convictions and three prior misdemeanor convictions, along with 25 arrests for alleged crimes ranging from armed robbery to criminal sexual assault.

"Woods' PTSD diagnosis does not make his sentence inappropriate," Kirsch said. "Woods does not show, or even allege, that there was a nexus between his PTSD and his crime."

Otherwise, the earliest Woods can be released from prison, assuming good behavior, is June 9, 2029, according to the Indiana Department of Correction. 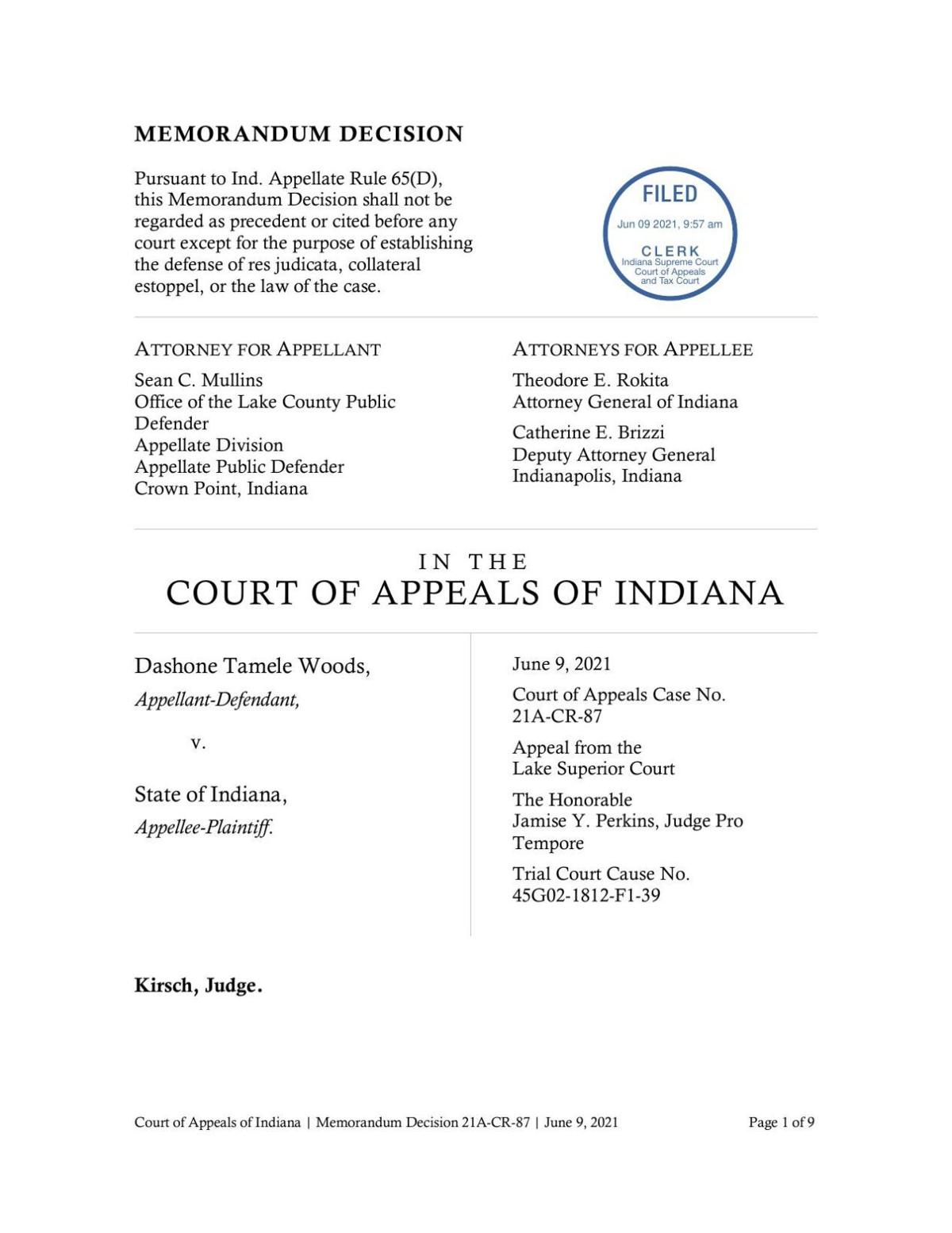 The Indiana Court of Appeals found Nations Restaurant was improperly evicted. But a Lake judge separately held the building, since demolished, was properly acquired by the Gary Housing Authority.

The Indiana Court of Appeals has ordered the resentencing of a Chicago woman who killed a blind pedestrian in Hammond while she was driving drunk.

The state will not get a chance to immediately pursue its claim that two former Munster school superintendents should be required to pay "triple damages" in connection with their alleged financial malfeasance.

Luciano Galvan III, 25, was sentenced in February to nine years in prison for the Sept. 9, 2018 rape at the woman's Whiting apartment.