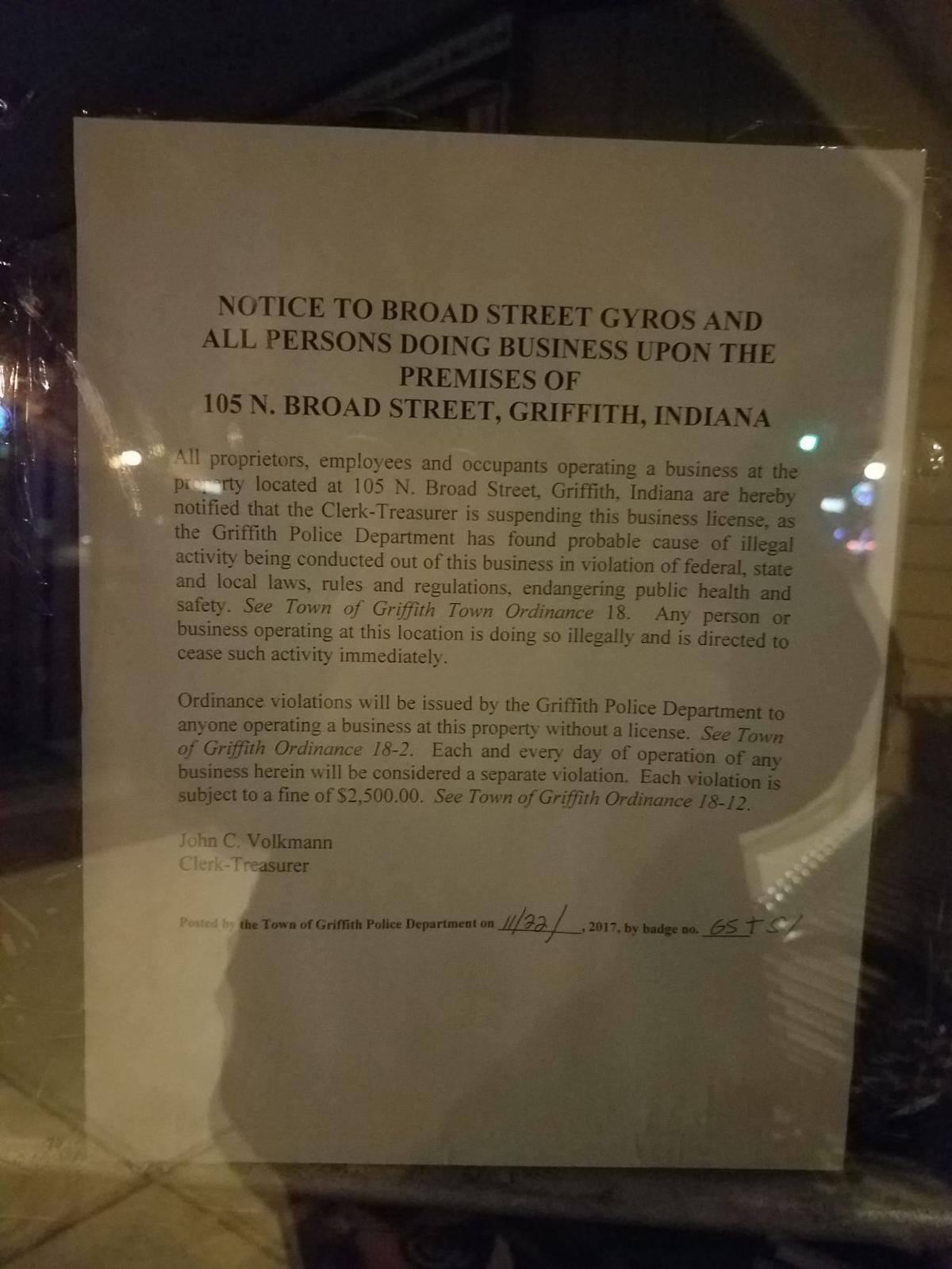 A notice posted on the Broad Street Gyros restaurant's front door entrance Thursday night notes that the town's Clerk-Treasurer suspended the business license because the Griffith Police Department "has found probable cause of illegal activity being conducted out of this business in violation of federal, state and local laws, rules and regulations, endangering public health and safety."

The notice states operating the business without a license could result in significant penalties. 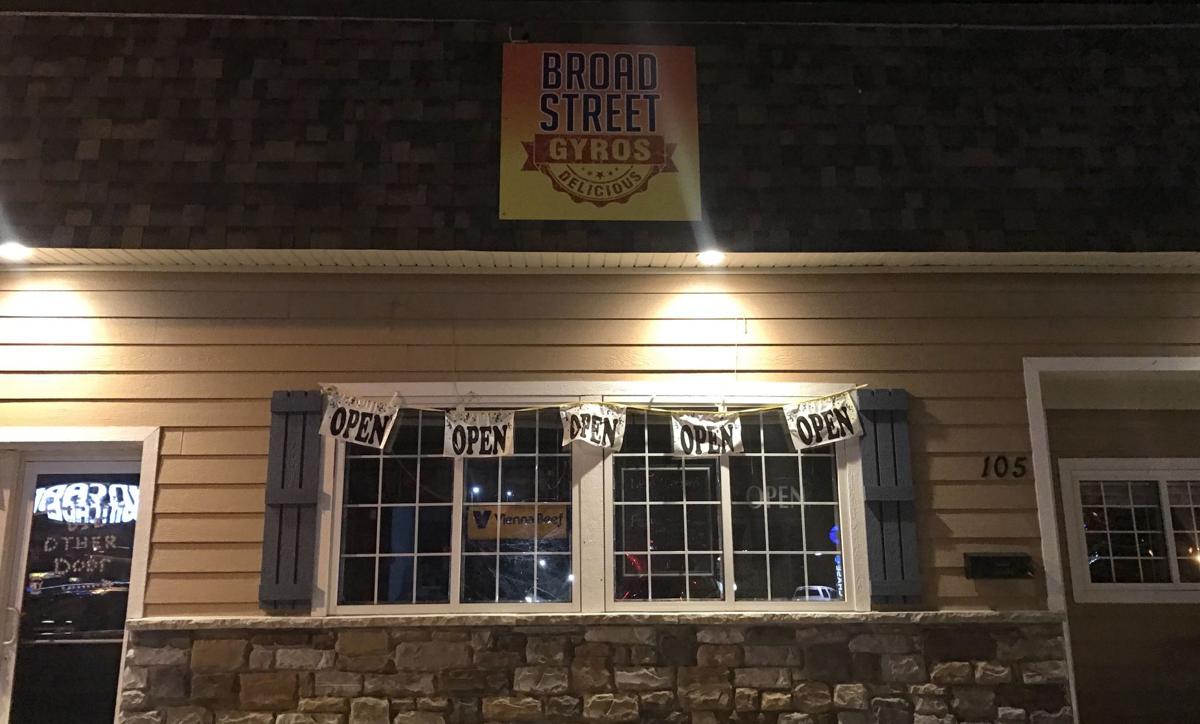 GRIFFITH — Two months after a Broad Street Gyros customer found cocaine in her cheese sticks order, police have secured felony charges against the business owner now accused of attempting to deal cocaine out of her restaurant.

The 50-year-old Gary woman was taken into custody at a known associate's house in Calumet Township and is now at Lake County jail, Martin said.

The business at 105 N. Broad St. in downtown Griffith — steps away from the town's police department — was first shuttered Nov. 22. The Town Council voted to allow the suspension to stand during the police department's investigation, records show.

Police said this week that the business remains shut down and the license suspended.

On surveillance footage, Demoff is seen entering the business office and returning to the kitchen prep line to pick up a white Styrofoam container and "drop an object into it and then seal with a similar style lid,"  the charging affidavit states.

The styrofoam cup was then taken to another prep station and remained in Demoff's possession until it was placed on the counter and then placed in a larger bag.

The cheese sticks order remained in the camera view until a customer arrived and paid for her meal that "unknowingly (contained) the narcotics packaged by Demoff for another individual," the affidavit stated.

At about 6:20 p.m. Nov. 21, police received a 911 call from a woman who explained she discovered drugs in her take-home order from Broad Street Gyros.

She told police when she came home, she immediately got a call from a female she believed to be the business owner, Demoff. Demoff asked if she received an order of cheese sticks by mistake, the affidavit said.

Growing suspicious, the customer looked more closely at her food and discovered a white powdery substance in a container that later tested positive for cocaine, Martin said.

Officers were able to obtain a search warrant that night, executed at about 8:40 p.m., Martin said. A K-9 handler and his police dog, Gino, reportedly detected the presence of drugs in several locations.

"The most prominent was in the business office," Martin said.

Police records show the business owner was present at the time of the executed search warrant.

No drugs were located, but the owner allegedly admitted to police during the search that she had "partied before while at work," Martin said, referring to police records.

When the detective asked what "partied" meant, the woman replied she "did a line (of cocaine) and toked a few times," court records show.

Demoff told police she realized she mistakenly packaged an order when two "younger men" came in upset they didn't receive their order of cheese sticks.

When pressed about why she didn't simply make a fresh order, Demoff became hostile and upset with officers, the affidavit stated.

Martin said Griffith police had been waiting on state police to extract information from surveillance footage seized from the business to pursue charges.

"The male locates his wallet and begins to count out cash ... and Demoff (becomes) visibly distraught and irate since she cannot locate the bag, frantically making phone calls," the affidavit states.

1 dead, 1 wounded in shootings this week in Gary

Township secession issue rests with the courts, but the proper court has yet to be decided

GRIFFITH — The winner of the decade-long battle to leave Calumet Township rests within the court system — but the question is, which court?

CROWN POINT — A not guilty plea was entered Friday for Carrie L. Demoff, the owner of Broad Street Gyros accused of putting a bag of cocaine i…

GRIFFITH — The Town Council on Tuesday opened two road resurfacing bids that were higher than expected.

A notice posted on the Broad Street Gyros restaurant's front door entrance Thursday night notes that the town's Clerk-Treasurer suspended the business license because the Griffith Police Department "has found probable cause of illegal activity being conducted out of this business in violation of federal, state and local laws, rules and regulations, endangering public health and safety."

The notice states operating the business without a license could result in significant penalties. 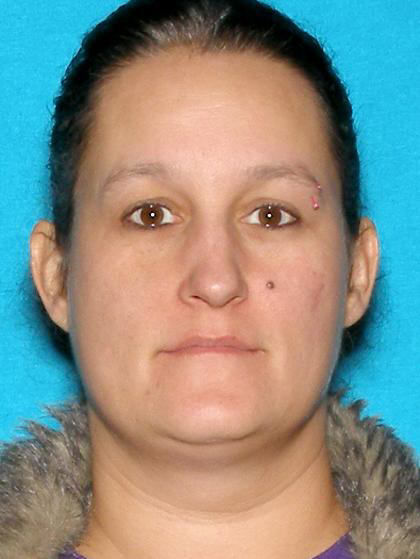