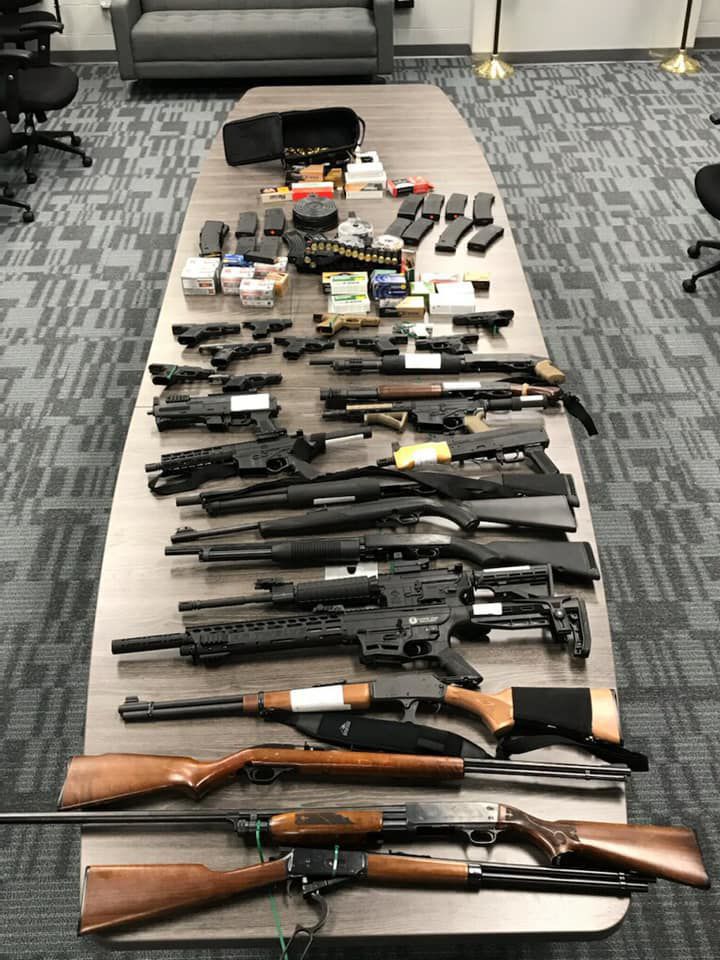 Police said they seized 28 guns and ammunition recently from two Gary homes associated with a 20-year-old man police believe was the subject of a social media recording showing him firing shots on New Year's Eve that damaged an electric pole. 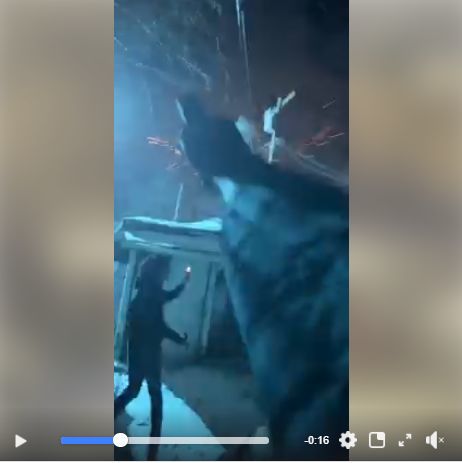 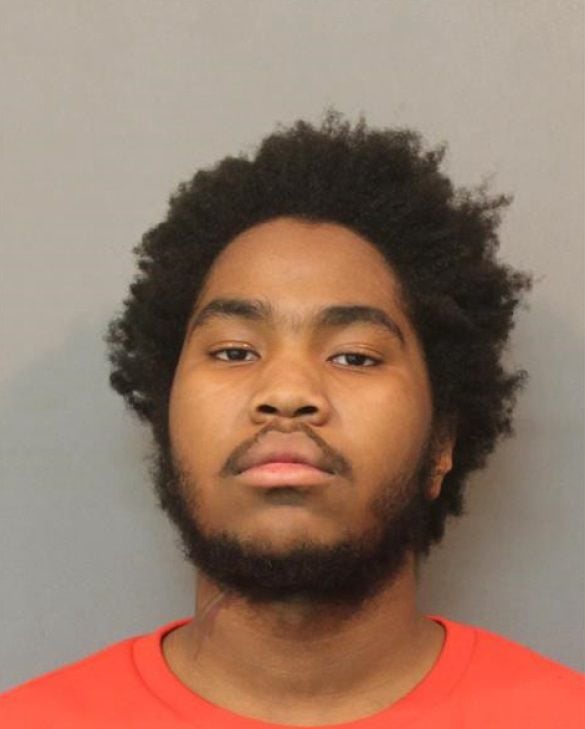 Police said they seized 28 guns and ammunition recently from two Gary homes associated with a 20-year-old man police believe was the subject of a social media recording showing him firing shots on New Year's Eve that damaged an electric pole.

HAMMOND — Firing celebratory gunshots into the sky on New Year's Eve or the Fourth of July is a dangerous game of chance, authorities said. But it's also basic physics: What goes up must come down.

"It's one of those bad traditions that we continue to see. People, they go out there, and want to ring in the New Year with gunshots. They shoot this weapon off and don't realize that they could hit someone. They could be killing someone or harming someone, and that's no celebration," Gary police Cmdr. Jack Hamady said.

Like clockwork each year, many of the Region's law enforcement agencies warn the public against celebrating in such a way, saying the bullets fall back to the ground and may damage property, or worse — wound or even kill people. And despite the warnings, people still fire off their guns at midnight.

They said it is nearly impossible to charge someone unless someone comes forward as a victim, or the shooter is caught in the act.

But this year, Hammond and Gary police got lucky twice.

Gary police detectives first became aware of the incident after receiving key evidence over social media — the alleged gunman had apparently posted a video to Facebook on New Year's Eve and it was viewed by thousands.

The video, along with dogged police work in confirming the shooter's identity and search warrants executed at two homes, resulted in police seizing 28 weapons in the case.

Andre D. Crawford, 20, of Gary, was arrested during the raid and charged.

"This guy, he wanted to bring in 2020 with gunfire. And he can say it was an accident, but it was done in a reckless manner," Hamady said. "He's lucky it was a NIPSCO pole instead of a body."

In the same week, Kellogg said officers secured criminal charges against a 40-year-old man accused of firing off multiple shots in his neighborhood Jan. 3 — but only because numerous 911 calls were made, officers were in the immediate area, and a tactical unit quickly dispatched to the man's home.

Raul Luna, of Hammond, was charged with criminal recklessness committed with a deadly weapon, a Level 6 felony, after he peacefully surrendered. Kellogg said no one was injured.

No victim, no crime

In another incident this New Year's holiday, Hammond police struggled to find a perpetrator.

Police responded in the early morning hours Jan. 1 to the 4700 block of Pine Street near Washington Irving Elementary School after receiving a 911 call.

The caller, who lives outside Hammond, said a relative in Hammond sent him a recorded video showing a group of people shooting assault rifles into the air.

Police checked one residence in the area, and the female inside denied knowledge of any video or of a relative taking video of celebratory shots. Officers attempted to make contact with occupants of another residence, but no one answered.

"No reporting person could be located at either location and no video was shared with police that evening. No other homes from that area called to report shots fired and police in scene could not establish a victim in the area willing to prosecute. For this reason, the officer cleared the scene without taking a report," Kellogg said.

He said the initial reporting person was interviewed as part of a follow-up investigation into the situation.

The reporting individual, who asked for anonymity to protect his family, told The Times he met with a Hammond police officer the following day, when they discussed the difficulties in prosecuting criminal recklessness cases when a witness is lacking.

The individual said while he's disappointed police were not able to find the shooters, especially since they were so close to the school, he understands the challenges.

Kellogg said the Hammond Police Department received approximately 20 shots-fired calls throughout the city on New Year’s Eve. Each one is investigated.

"In Gary, our shots-fired calls turn into 'assaults with firearms' and 'homicides.' So every time, our officers don't know what we're walking into. (People) could be shooting up in the air aimlessly, at a structure, a residence, or shooting at someone and someone's been hit. We can never take a lax approach to responding to these calls. The day we do, something will happen to you," he said.

East Chicago is one of the few North Lake County cities to still use ShotSpotter technology, which is able to track and pinpoint an exact location when shots are fired. ShotSpotter uses acoustic sensors and audio analysis to track gunshots and loud explosive sounds.

Unfortunately, police temporarily shut down the technology around the midnight hour on holidays to keep sensors from overloading, Rivera said.

That makes 911 calls and smart patrolling all the more critical.

Rivera said he responded to Ameristar Casino during the recent New Year's holiday after a woman reported hearing a "crack" in her vehicle and noticed a bullet had become lodged.

"These rounds travel," Rivera said. "We had extra patrols near the casino property, so these rounds must have come from a long distance."

Absent critical evidence and a person willing to prosecute, there isn't much police can do, Kellogg said. But the consequences can be deadly.

Take the case of 13-year-old Noah Inman: Three and a half years ago on the Fourth of July, the Hammond boy was fatally struck by a falling bullet while playing basketball with friends.

Detectives long suspected the bullet was fired into the sky in celebration by someone in the area, but it's been an uphill battle to prosecute the case without witnesses or a possible suspect to come forward.

No one has been charged in Inman's death.

"Ever since the death of 13-year-old Noah Inman in July of 2017, Hammond police have been seeking a change in the way celebratory gunfire is treated in Indiana," Kellogg said.

Criminal recklessness ramps up to a Level 6 felony if the person is armed with a deadly weapon, he said. To get charges filed, the officer needs to either observe and clearly identify the shooter, or establish probable cause, based on evidence. The officer also has the option for writing a city ordinance violation for discharging a firearm in city limits.

Anyone convicted of a Class 6 felony criminal recklessness could serve six to 30 months in prison and face up to a $10,000 fine.

More in ICYMI: Here are the most-read stories from the past week (2 of 30)

Gary rapper charged with shooting of power pole on Facebook

Andre D. Crawford, of Gary, faces charges of criminal recklessness and criminal mischief, both level 6 felonies, according to charging documents obtained by The Times on Tuesday.

A prayer vigil will be held noon Wednesday near 19th Avenue and Harrison Street, the same week a man was shot and killed in the neighborhood.

Authorities are investigating the city's second confirmed homicide of the year after a gunshot wound victim was found overnight.

The victim told police he was traveling eastbound on Central Avenue when an unknown vehicle approached from the rear and began shooting at his vehicle.

Police with the Lake County Traffic Safety Partnership arrested 18 people on drunken driving charges in December and issued about 1,000 ticket…