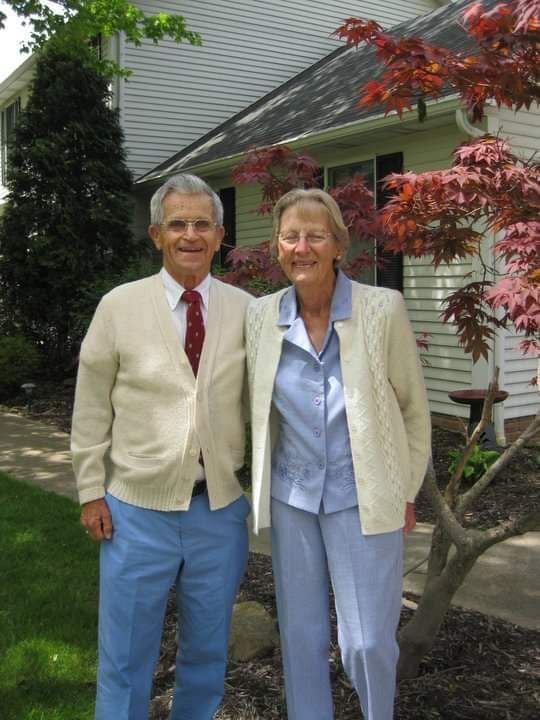 Russell Boehm is seen with his wife, Lenore. Russell was a young boy in 1933 when he witnessed a commercial place explode and fall from the sky over Chesterton. Seven people died. 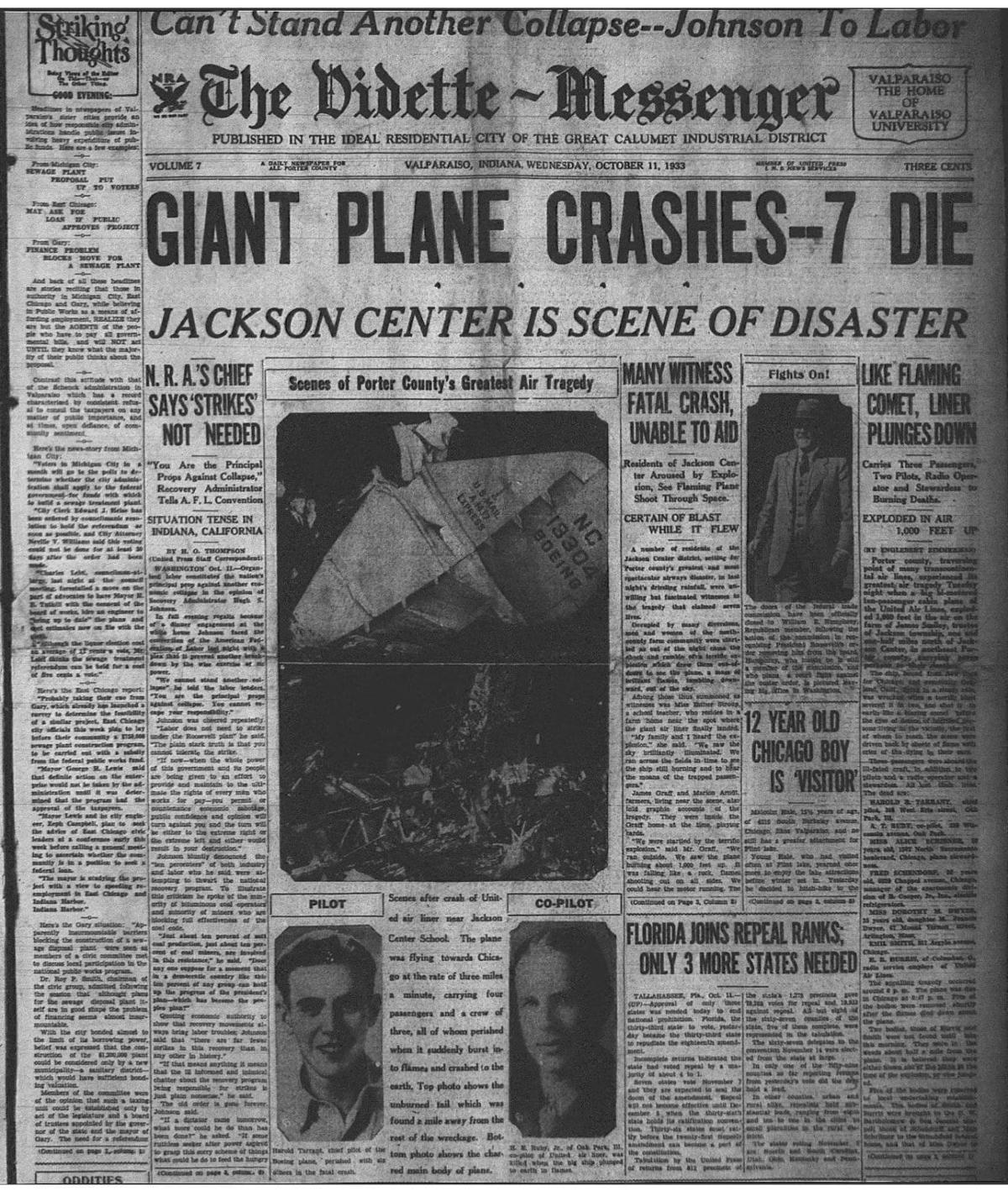 Front page coverage of the Oct. 10, 1933, commercial plane explosion and crash near Chesterton in Jackson Township. 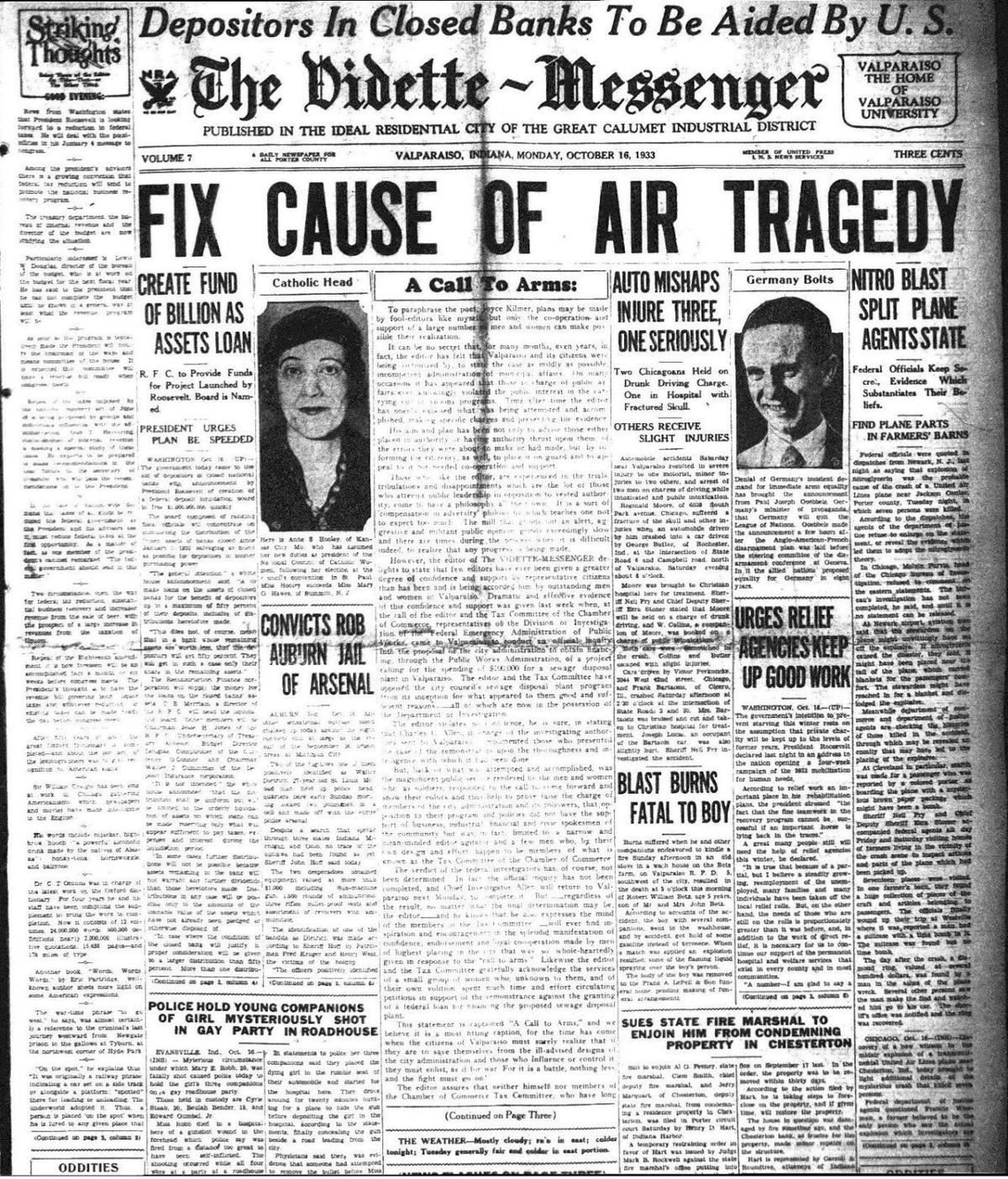 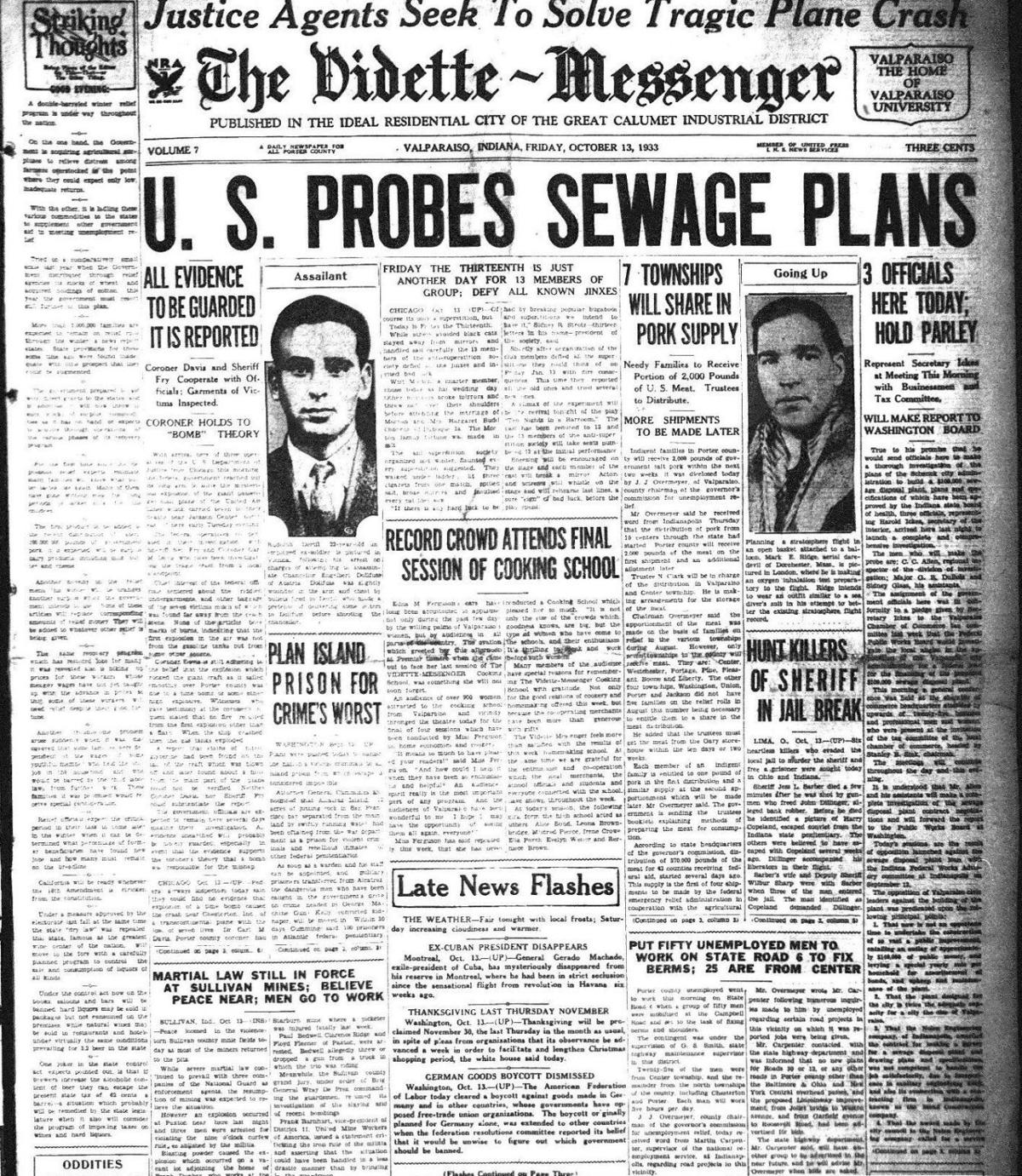 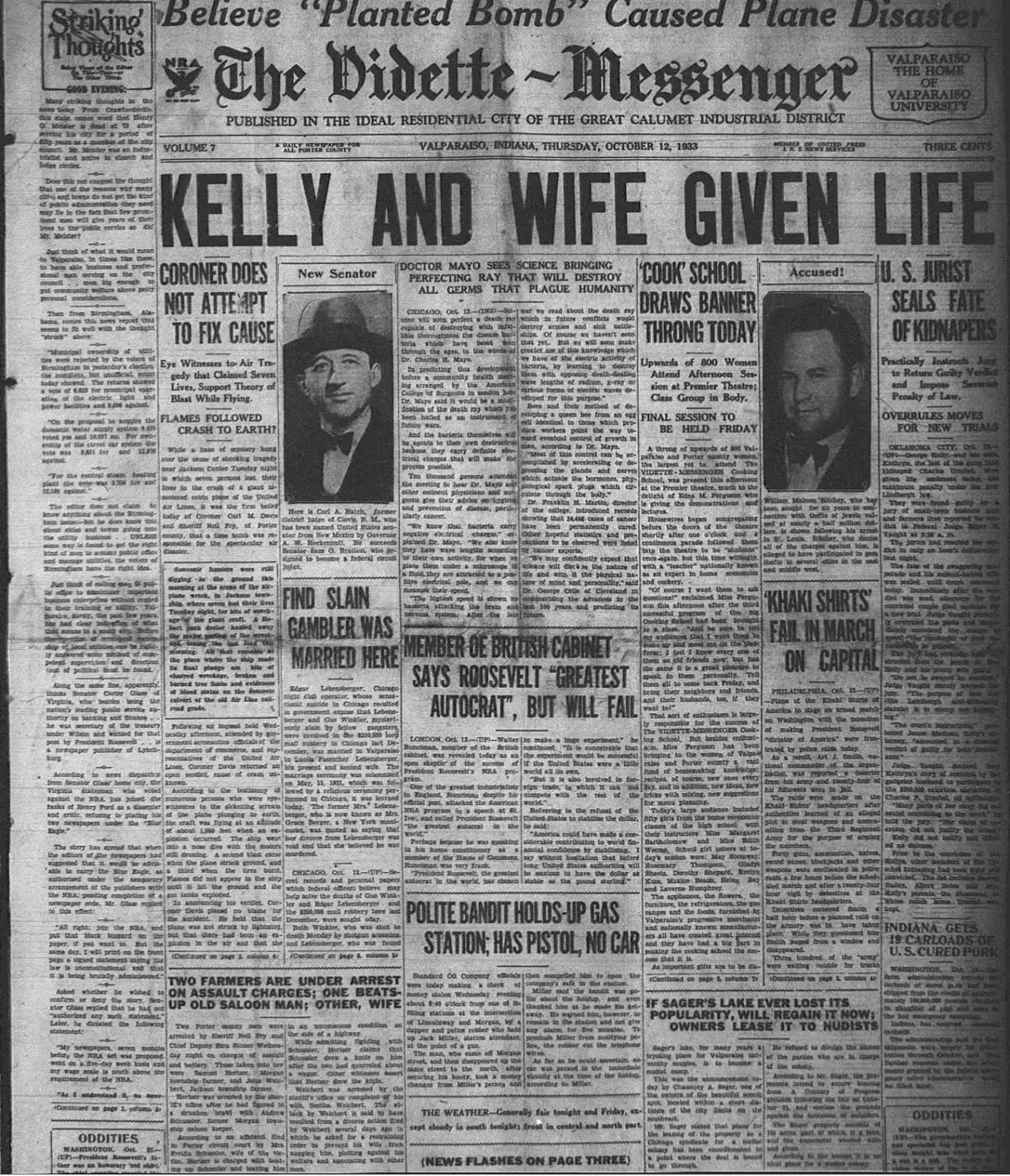 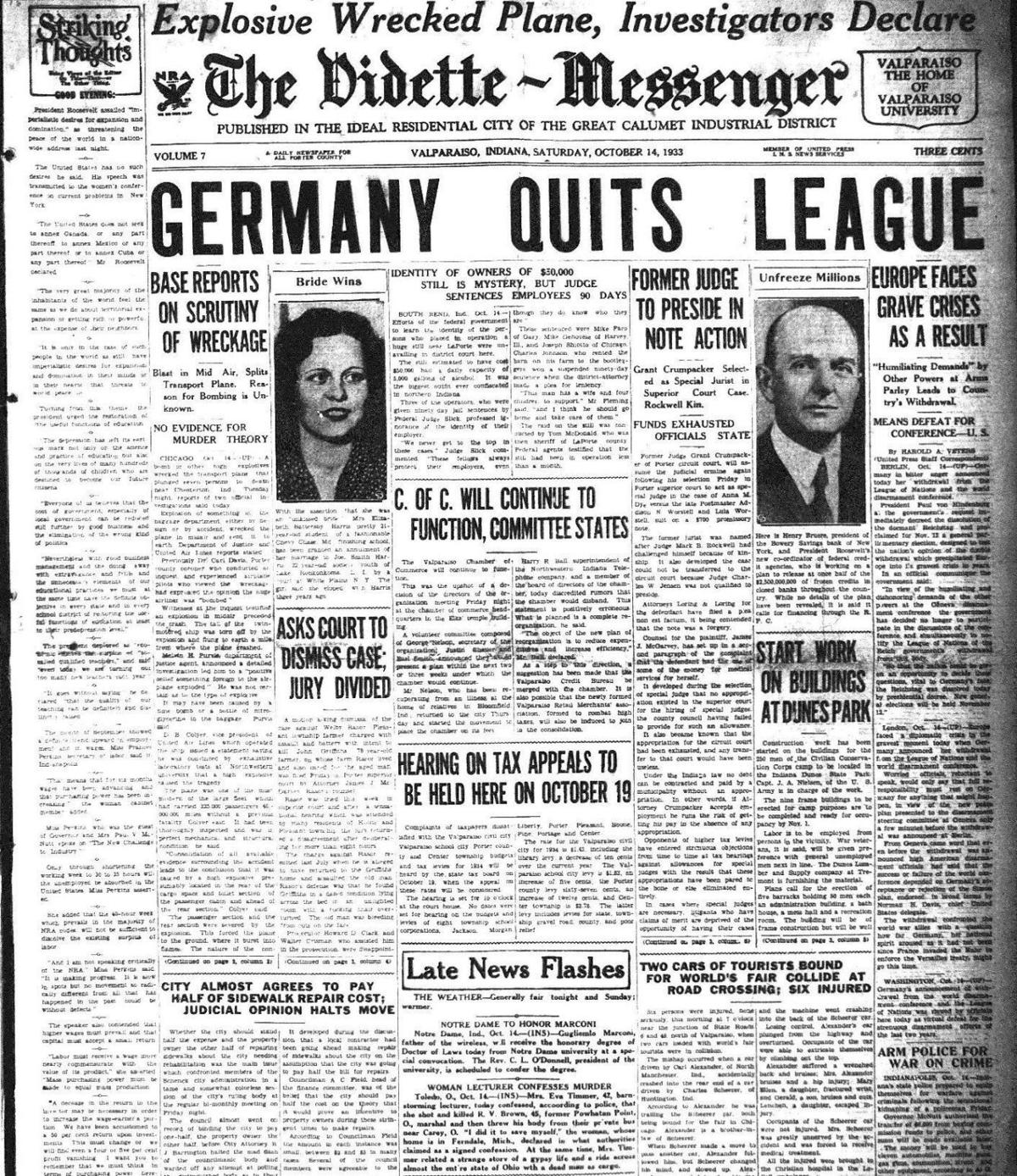 As a young boy growing up during the 1930s in the unincorporated area just outside of Chesterton, Russell Boehm said nothing much flew overhead but the occasional small plane.

That fueled the intrigue when on the misty night of Oct. 10, 1933, while visiting a neighbor’s home just up the dirt road in Jackson Township, Boehm and his family heard a loud noise off to the east.

The group ran outside in time to hear the engines of a plane rev up in the sky above and then begin laboring before there was a second explosion, the 96-year-old said looking back.

“It was a fire,” said Boehm, who is living in Ocala, Florida, with his wife, Lenore. “You could see that. That’s what directed you to know where it was and assumed what it was.”

Trailing behind his two older brothers, Boehm joined in the mile-and-a-quarter dash to discover that a United Airlines Boeing 247 commercial plane had crashed in an agricultural area of what is now the Indiana Toll Road and County Road 400 East, killing all seven people aboard.

“When we got there, the most exciting thing to me and the most stunning was one of the tires had been pulled off the plane as it crashed down into the site and was hanging in the tree ... and it was (ablaze),” he said. “So it became the beacon for the light so that you could see things around it very well.”

The plane itself was among the newer models for the time made of metal and thus had not burned, he said.

The way Boehm figures it, he could well be among the last people or even the last person alive, who remembers being at the crash site 87 years ago. Anyone younger would not likely have clear memories of the history-making event and those older have to be dead by now, he said.

“So my thinking is there can’t be very many still hanging around ... that could share with you this information,” Boehm said.

What Boehm and others would later learn is the commercial airliner in question is believed to have been blown out of the sky by some sort of onboard explosive, killing its three crew members and four passengers, said Naperville author Bryan W. Alaspa, who researched the crash and subsequent federal investigation for his book, “Sabotage: A Chronicle of the Chesterton Crash.”

“I was writing about unsolved mysteries in the Chicago area. While doing research on it, I stumbled across this one,” said Alaspa, who was not born until 38 years after the crash.

“At the time, I wasn’t sure it fit into the book I was working on, but felt it could be its own book,” he said. “So, I decided to dig deep when I wanted to write about it for its own book.”

His six months of research revealed an unsolved crime of historical proportions.

“I feel it should be better known,” Alaspa said.

Traces of highly explosive nitroglycerin were discovered in the wreckage, he said.

“They (the FBI) determined it was a bomb,” he said of onboard explosion heard by Boehm and others.

While a flight a couple decades later often is cited as the first example of a commercial airline bombing, Alaspa said that unfortunate title belongs with this 1933 crash that federal investigators determined was a crime.

There was never an arrest made, and no motive was identified, despite various theories, including one involving a male passenger unwilling to hand over a package to bag handlers as the cross-country flight made its way from New York and Cleveland with a stop scheduled in Chicago, Alaspa said.

“It’s frustrating it doesn’t have that satisfying ending,” he said.

Part of the problem in solving the crime may have been the scene Boehm described, which involved many people arriving at the crash site before investigators and not just trampling around the crime scene, but also hauling off pieces of the wreckage as souvenirs, Alaspa said.

“It crashed apparently quite vertically because the debris site was not real wide,” Boehm said. “It did not spread over a large area in my memory.”

Boehm said he did not see any of the bodies of those who perished in the crash.

What he does remember are some of the 70 individuals mulling around the site collecting coins, clothing, pieces of the plane and other items as souvenirs. Boehm said his group picked up a small aluminum shard from the plane’s framing, which they later returned per a public plea from federal investigators.

“They wanted all the parts they could find trying forensically to discover how the wreck occurred,” he said. “They did not know.”

The Times came across several small metal pieces wrapped in a paper towel in a file of historical documents on the crash held at the Westchester Township History Museum in Chesterton. Staff, who seemed equally surprised by the discovery, were unsure about the identity or source of the pieces.

“Who knows if someone walked off with a key piece of evidence,” Alaspa said.

While others ran directly toward the crash site, a neighbor that Boehm’s family had been visiting at the time, who was paralyzed from the waist down, grabbed his crutches and went out in search of a telephone to call for help.

“Now what a brilliant thing to do,” Boehm said. “We didn’t even think of that.”

After locating a phone, which was not common in the area that still lacked electricity, he first notified state police located at what is now the Indiana Dunes State Park.

The decision to immediately call state police later paid off for the young man, who went on to work as a radio operator for the department for the next few decades.

“Here’s this gentleman who would never be able to get any employment during the Depression or maybe any other time incapacitated from the waist down,” Boehm said. “Isn’t this exciting? I just love that.”

The young man’s second phone call that night was to the Chicago Tribune, which sent out four reporters.

The arrival of the reporters sticks out in Boehm’s mind because they were driving Duesenberg cars produced in Auburn, Indiana.

“We had never seen such fancy cars in our life,” he said.

“This was the event of the year in Jackson Township,” Boehm said. “I mean, nothing happened there except corn and wheat and oats and horse manure.”

The crash attracted attention far beyond the local Duneland community, as was evidenced by the FBI documents Alaspa obtained through his Freedom of Information Act search.

“There were notes from (the first FBI Director J. Edgar) Hoover himself,” he said.

What Alaspa learned from his research is that the plane in question was on its way to California. Planes in those days were not able to carry enough fuel to make the cross-country trip in one leg, so stops were scheduled along the way like this one in Cleveland that was next headed to Chicago.

This plane was considered pretty high-tech for the era, nonetheless, with its height during flight, pressurized cabin and air conditioning.

Investigators never did determine whether the explosive on this flight was loaded on the plane somewhere en route or carried on by a passenger or crew, he said.

There has been a lot of talk about a businessman on board from Chicago, who appears to have gone to New York just to get away, Alaspa said. What has raised suspicion is that he got on board in New York with a package that he was not willing to turn over to be stowed away with the other luggage.

The man even refused to let go of the package during the flight’s stopover in Cleveland and was remembered as standing apart from the others, Alaspa said.

“What was in it, no one was able to determine,” he said of the package.

Despite the man’s odd behaviors, investigators found nothing questionable in his background.

“They could find nothing connecting him to any sort of crime or reason to blow up the plane,” Alaspa said.

There also has been talk about the bombing being carried intentionally to make air traffic appear unsafe during the period when pilots were attempting to join others in the industry in unionizing, he said.

“So it remains a mystery as to what exactly happened,” Alaspa said. “The Chesterton crash is one of those enigmas.”

"This was the event of the year in Jackson Township," Boehm said. "I mean, nothing happened there except corn and wheat and oats and horse manure."

The woman was wearing a protective helmet, but the the limb appears to have struck her body, causing possible internal injuries and a possible broken leg, the fire department said.

Russell Boehm is seen with his wife, Lenore. Russell was a young boy in 1933 when he witnessed a commercial place explode and fall from the sky over Chesterton. Seven people died.

Front page coverage of the Oct. 10, 1933, commercial plane explosion and crash near Chesterton in Jackson Township.