Texas gunman posted on Facebook before attack on elementary school

A federal judge has dismissed the latest attempt by Northwest Indiana property owners to claim the Lake Michigan shoreline as their own.

U.S. District Court Chief Judge Jon DeGuilio determined there was no basis for three town of Porter land owners to file suit in federal court seeking to undo a 2018 Indiana Supreme Court ruling that clarified the shoreline of Lake Michigan is owned by the state and held in trust for the enjoyment of all Hoosiers.

DeGuilio said the claim by Raymond Cahnman, Randall Pavlock, and Kimberley Pavlock that the Gunderson v. State decision amounted to an unconstitutional taking of their beachfront property is not subject to federal court review due to the sovereign immunity provided to states by the U.S. Constitution's 11th Amendment.

Moreover, even if there was a legitimate federal issue, DeGuilio said the plaintiffs still would lose because Gunderson did not take their land without compensation; they never owned the Lake Michigan shoreline in the first place.

"Gunderson did not transform private property into public property but clarified where the boundary of the public trust had always existed along the shores of Lake Michigan," DeGuilio said.

"Without a clearly established property interest in the land, the subsequent state clarification — either by the judiciary or the legislature of where the boundary between state and private property and where the public trust had always existed since Indiana joined the Union in 1816 — cannot be considered a taking."

The Gunderson decision held that Indiana owns — and always has — the land under Lake Michigan and the adjacent shoreline up to the ordinary high-water mark.

That mark is defined as the line on the shore established by the fluctuations of water and indicated by physical characteristics, such as a clear and natural line on the bank, shelving or changes in the soil's character.

The 4-0 Gunderson ruling last year was codified in House Enrolled Act 1385, along with the right of Hoosiers to use the shoreline for walking, fishing, boating, swimming and any other recreational purpose for which Lake Michigan ordinarily is used.

The law enacted by the Republican-controlled General Assembly also specified Lake Michigan-adjacent private property owners are not entitled to exclusive use of the beach or the water.

Indiana Attorney General Todd Rokita, a Munster native, said he is pleased the Hammond Division of the U.S. District Court for the Northern District of Indiana granted the state's motion to dismiss the federal suit.

"The court’s decision affirms what we always knew to be true — that the shoreline of Lake Michigan belongs to every Hoosier for their use and enjoyment," Rokita said.

Christopher Keiser, an attorney with the Pacific Legal Foundation, the California-based property rights law firm representing the plaintiffs, did not immediately say whether they plan to take the case to the 7th U.S. Circuit Court of Appeals in Chicago.

"We're disappointed in the decision. Along with our clients, we are considering our next steps," Keiser said.

The nation's high court turned away the case without comment in February 2019, seemingly content to leave the Indiana Supreme Court ruling as the final word on Lake Michigan beach ownership. 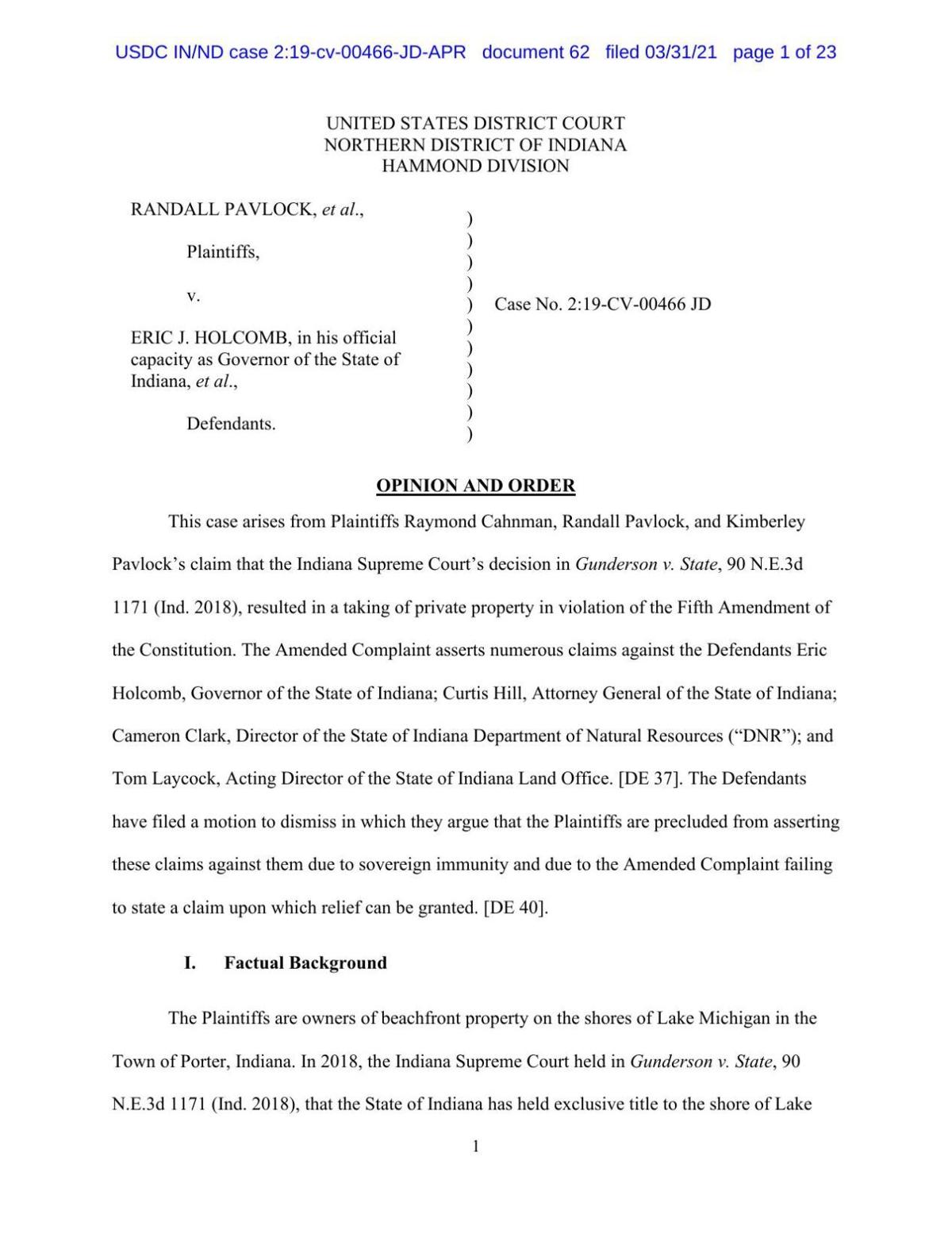 Three town of Porter property owners who claim a right to a private beach on Lake Michigan are challenging a new state law that explicitly asserts state ownership of the Lake Michigan shoreline.

Three Porter property owners are asking a federal judge to reject the state's attempt to dismiss their lawsuit over the ownership of Lake Michigan beaches.

State lawmakers appear to have found the sweet spot for preserving public recreational use of the Lake Michigan shoreline, while also protecting adjacent private properties from erosion.

INDIANAPOLIS — The U.S. Supreme Court has been asked to overturn the February ruling by Indiana's highest court that Lake Michigan's shoreline…

A federal appeals court appears unlikely to disturb an Indiana Supreme Court ruling that held the shoreline of Lake Michigan is, and always has been, owned by the state for the enjoyment of all Hoosiers.

Effort to protect Lake Michigan poised to continue — for now

Legislation that could have scuttled a long-planned sewer project intended to keep human waste out of Lake Michigan has been revised by the Senate Utilities Committee.

A long-planned sewer project intended to keep human waste out of Lake Michigan is likely to go forward after a secretive plan to scuttle it was foiled at the Indiana Statehouse.