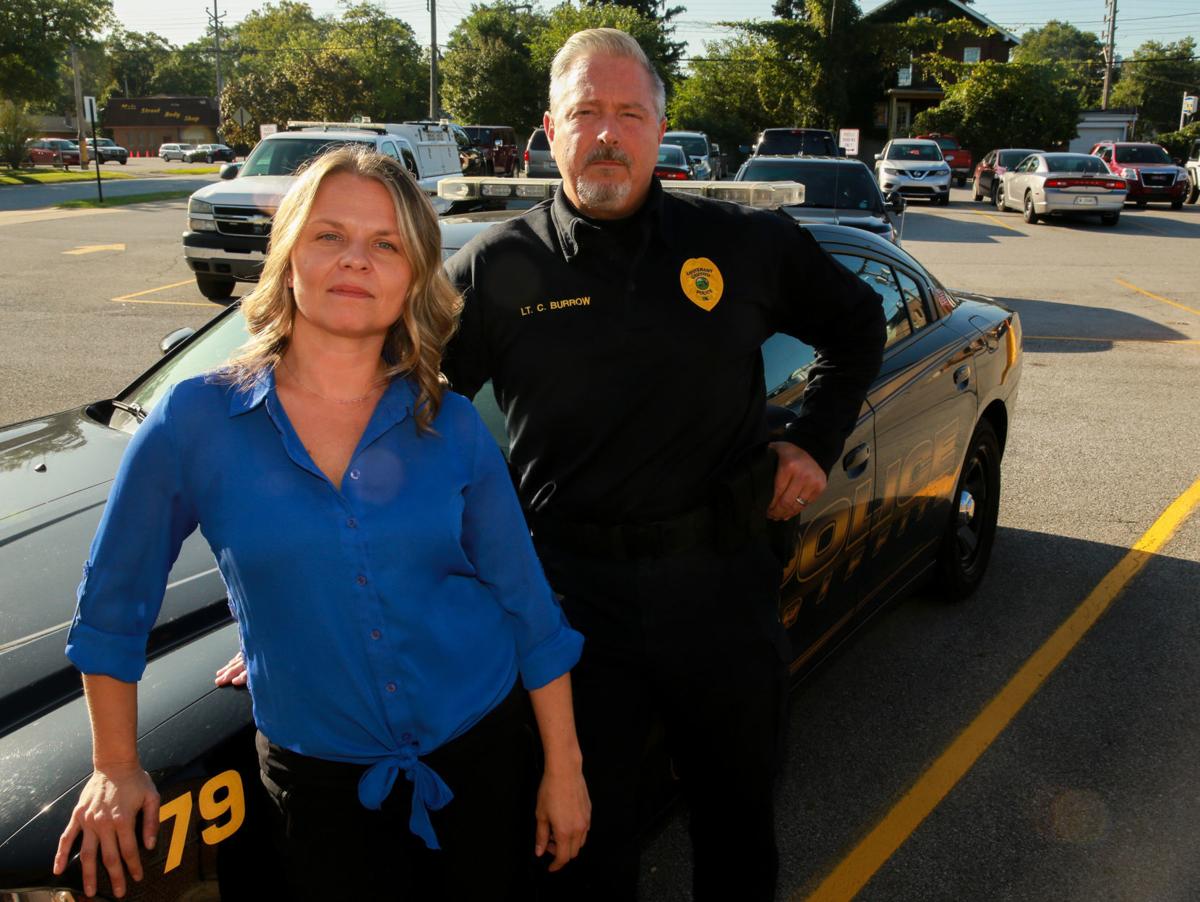 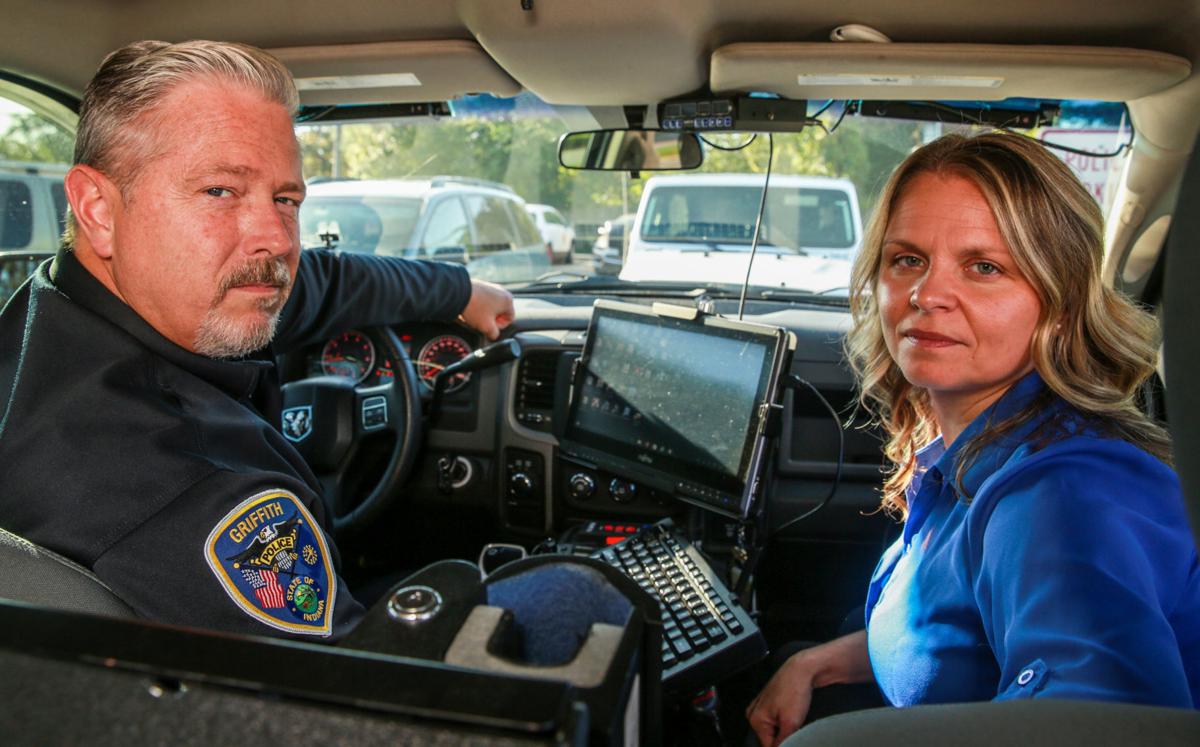 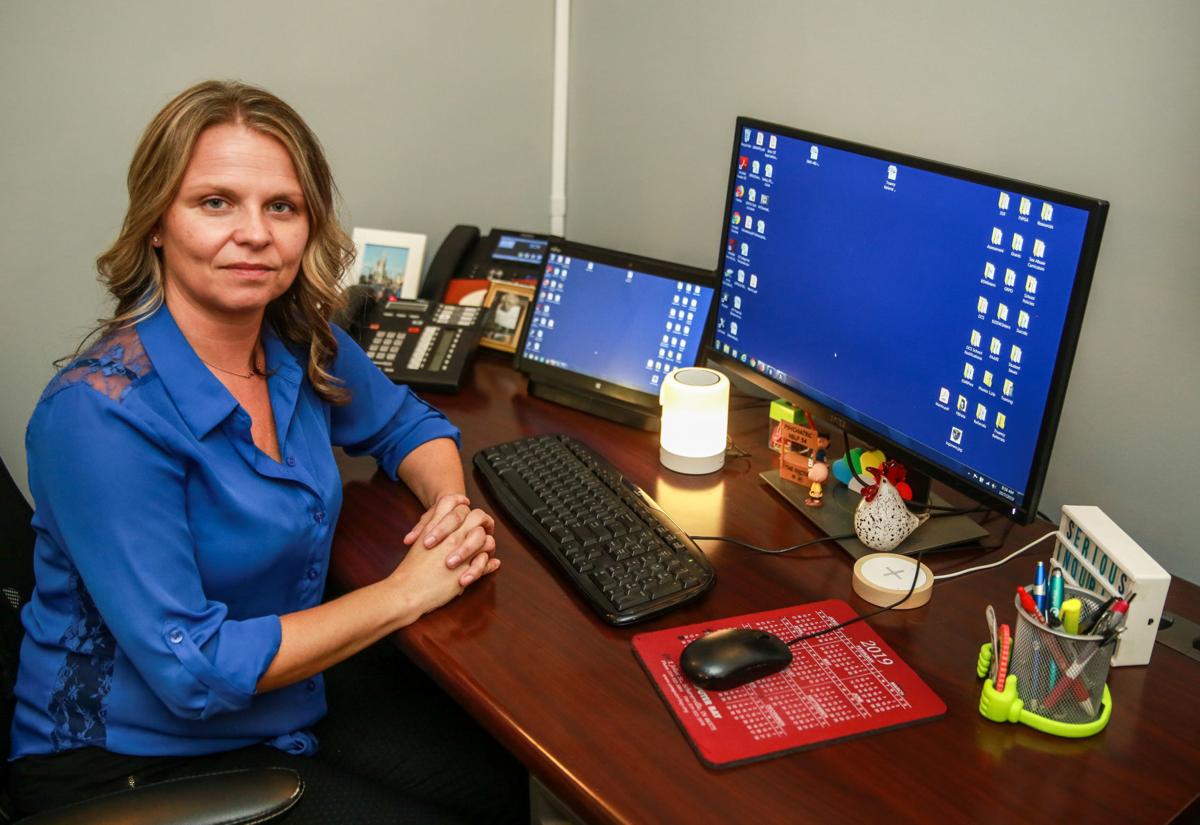 Social worker Erica Rios sits at her desk at the Griffith Police Department.

GRIFFITH — Erica Rios understands the importance of support in a time of crisis.

It’s one of the reasons she became a social worker.

When her first husband, Duane Rios, died two months after being deployed to Iraq as a Marine on April 4, 2003, Erica Rios was consumed with the feeling of “having absolutely nowhere to turn." Duane was only 25 at the time of his death. The two were high school sweethearts.

“No one knew what to do,” she said. “And, like so many people in helping professions, I chose social work because I wanted to be for others what I needed in times of crisis.”

In addition to this, Rios, who worked for five years with the Department of Child Services, said she’s always found herself fascinated by mental health and human behavior — particularly the “why” behind people's actions.

The Griffith native moved from California back to the Region and later enrolled in a graduate program at Indiana University Northwest to earn her master’s degree in social work.

This eventually led Rios to approach Griffith Police Chief Greg Mance. She hoped he would consider incorporating social work into the department. He gladly agreed.

“Officers are tasked with dealing with a variety of issues, and a lot of those issues aren’t necessarily a criminal matter,” Mance said. “They’re dealing with social issues, and we’re just not equipped and trained to really facilitate a solution for those problems.”

Mance said these types of situations — which can include domestic battery or homelessness — left police with limited response options before Rios joined the department in 2016.

“We would provide a pamphlet with information and hope that person would follow through with it,” said Mance, who has been an officer for more than 20 years. “But often these issues are much more complex and too difficult for someone involved in that type of crisis to find their own resolution.”

Mance said an officer, Sgt. Marlene Starcevich, approached him soon after he became chief in 2013 and asked to pursue a social services-type of role within the agency. Once he found the proper funding, Mance gave Starcevich the go-ahead.

Her efforts showed the department the importance and demand for this kind of work, he said. But eventually, the grant would run dry. A more permanent solution was needed.

This is why Mance was so receptive to Rios coming on board; she was first an intern while she completed her last year of graduate school and then went full time in January 2018.

“(Starcevich) did a great job with it, but it became evident that we really needed to find someone who had that specialty and education in dealing with these types of complex social issues,” Mance said. “Whether it be an act of God or just good luck during that same time period, Ms. Rios approached us. The rest is history.”

‘A face to an agency’

Rios said the Griffith Police Department is one of two law enforcement agencies in the state with a full-time social worker on staff, with the second in Bloomington.

This is because social and police work typically have operated in separate silos, she said. But through bridging the gap between the two, serious strides can be made toward reducing town crime by looking at the larger issues at play or even smaller ones — such as helping pay a water bill — which might cause someone to engage in illegal activity.

“With law enforcement and social services, one typically will refer to the other and then move on,” Rios said. “The overarching goal of all of it is to try to be more preventative. … If you can kind of put these things together and overlap the rings, it makes sense to say, ‘This is a pattern. We need to stop this before it becomes whatever.’”

“The expense of crime, whether you look at it on the police side, prosecution or imprisonment, it’s just is so costly,” Mance added. “We need to find ways to get in front of these issues. So, if we deal with the social issues before they become criminal issues, we’re all ahead of the game in many different ways.”

One of the ways Rios is able to take that more preventative approach is through department training, which focuses on topics such as sexual assault, mental health, addiction and more. Officers then receive specific tools to help people when confronted with a social problem rather than exchanging a business card and saying, “Good luck.” They also have Rios at their disposal to make contact with certain individuals or families who she might be better equipped to help, intervening in an appropriate and positive way.

“We put these officers on the front line, and we haven’t been giving them all the tools they need to address all issues that we expect them to address,” Mance said. “So, by having a social worker who has the skills, knowledge and contacts is huge. … She’s put a face to an agency.”

Rios works part time with Griffith Public Schools in the same type of role. This allows her to bring an additional component to her police work by enabling her to see possible underlying issues affecting a family beyond things of a criminal nature, like cyclical or generation problems.

“You get to see things from two sides … and tap into both systems to paint a more holistic picture of what’s going on with a kid and their family,” she said. “We’ve tried to reduce the amount of families that fall through the cracks."

"I did a lot of research into it, and I can’t find another police social worker that is embedded in both the police department and school in the country,” Mance added. “So, this is really a very unique system in place here, and one I think is showing some promising results.”

‘What a social worker does'

In her career, Rios has come across many challenges, like misconceptions surrounding her job title.

She said social workers often are associated only with removing children from families, and while that may occur, it’s not the sole responsibility of the profession.

“I don’t think a lot of people know what a social worker actually does because we can wear a lot of hats,” she said. “You find us in schools, hospitals, nonprofit agencies, private practice. … Our job is to meet the client where they are and get them to where they want to be. I really like to think of myself as being a tool that people can use to make their jobs or lives easier and more efficient.”

As for working within a law enforcement agency, the biggest difficulty hasn’t been explaining the “why” behind incorporating social work, but the value of having her position within a department, Rios said. This has caused her to put her skills and experience to the test.

Rios said it takes time to develop relationships, improve outcomes and build trust with officers, as well as the greater community. These are key to a social worker’s success.

“I would like to do more community-focused work, such as trainings and follow-ups,” she said. “I just do not have the time to do everything I would like.”

However, Rios isn’t bogged down by these obstacles. She knows the importance of what she’s currently doing — as does Mance.

Mance said the town’s level of violent crime dropped by more than half in the first year Rios worked full time with the department.

“There are numbers that show she’s a big part of that reduction,” Mance said. “But some of the more telling things is that people come to the front window and say, ‘Hey, I hear that you have a police social worker. I have an issue I’d like to speak to her about.’ And those conversations likely wouldn’t have taken place had we not had her here.”

Looking toward the future, Rios said it’s her goal to show other police departments the benefit of having a social worker on staff.

“(It) improves outcomes, reduces recidivism, builds strong community relationships and enhances officers’ ability to intervene with families to lower/prevent crime,” she said. “I would love to see the social work program implemented in other departments in the county. … It’s just hard to put a dollar sign of what you prevented.”

Mance said he believes other departments will start to recognize the importance of having this type of position in the future and begin changing the way problems are being assessed.

“As long as I’m here, we’ll always find a way to fund this position. It’s improving Griffith today, and it’s improving it for future generations,” Mance said. "It’s obvious that our current criminal justice system or the way it’s being facilitated isn’t addressing the issue, so we need to find a new way to do it, and this is one of those ways. … The amount of crime being committed in communities is being committed by a very small portion, so why not put a great deal of your resources on those few individuals? And we do that. We’re here to help people.”