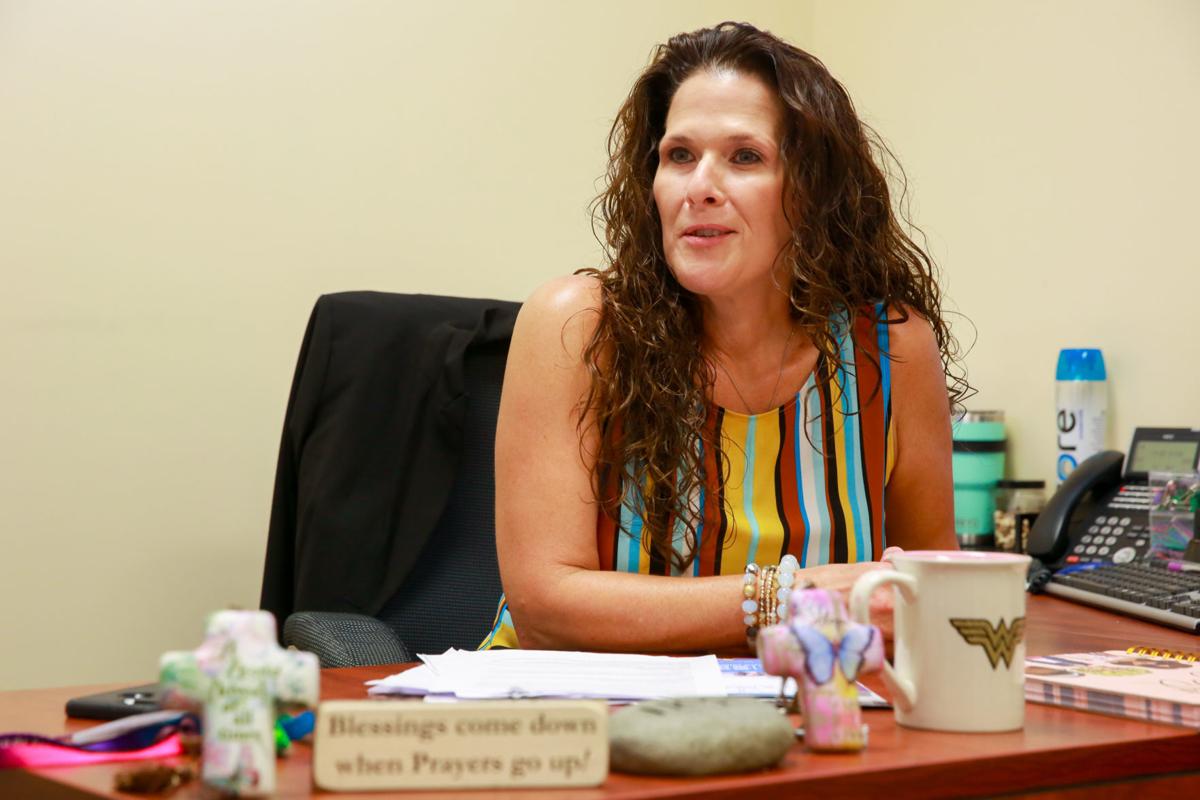 Andrea Graciano talks about her job as the victim advocate for the Hobart Police Department. “I really do believe we are placed somewhere for a reason, and that’s why I’m here in Hobart now,” Graciano said. “(So, I can) help grow a program I really believe in.” 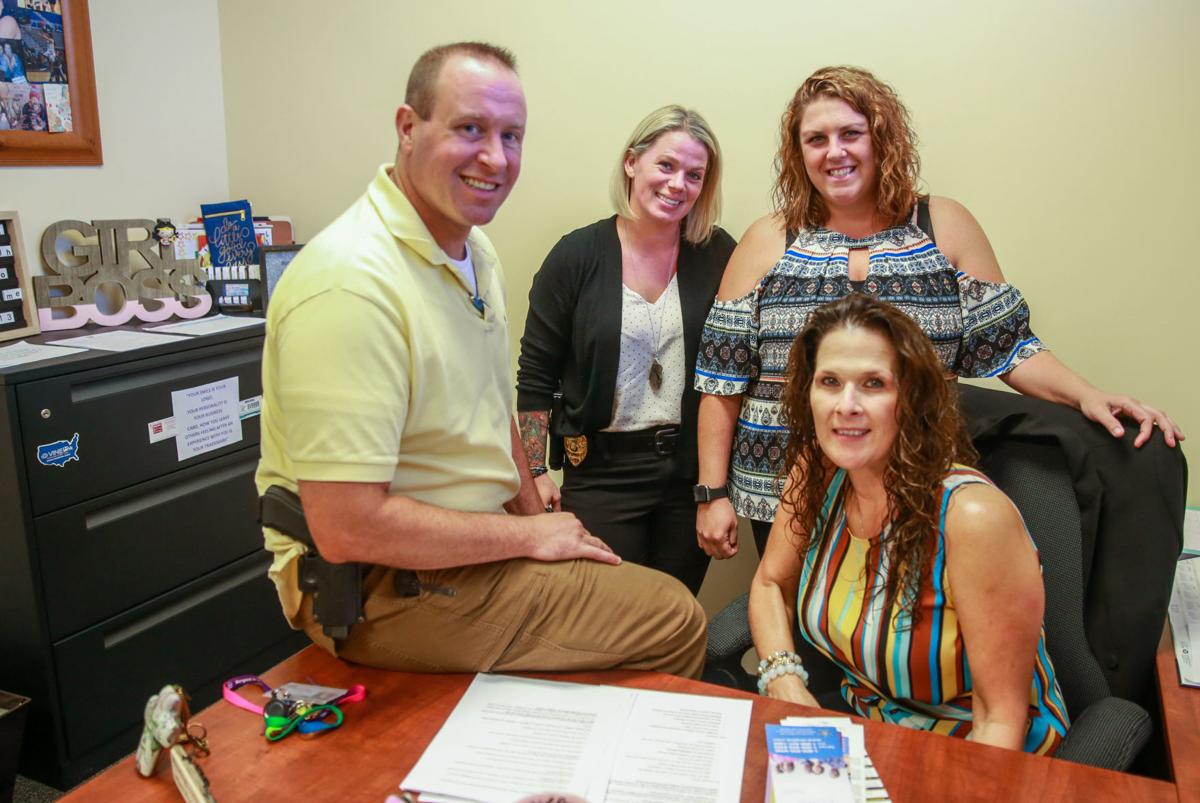 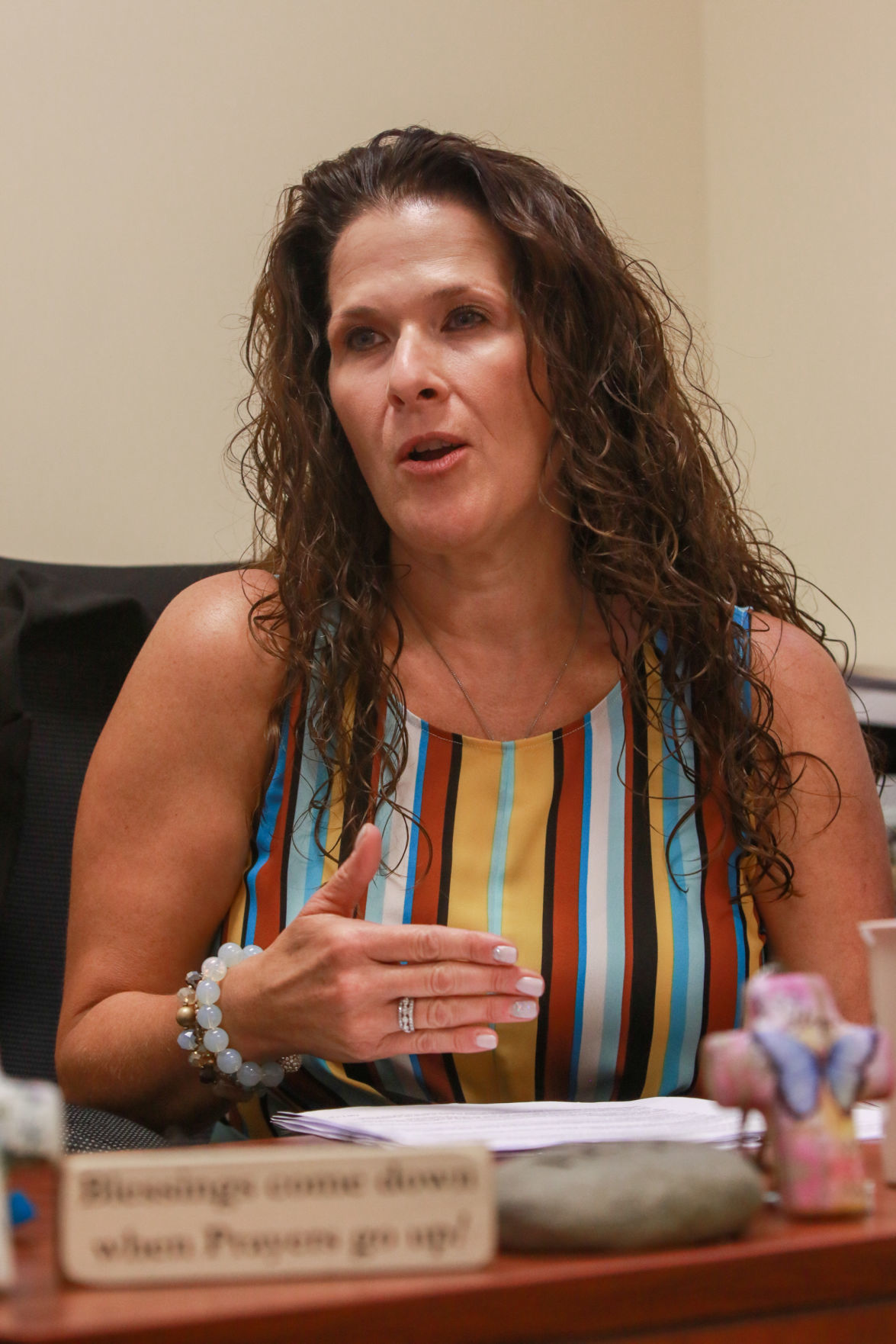 Andrea Graciano talks about her job as the new victim advocate for the Hobart Police Department. 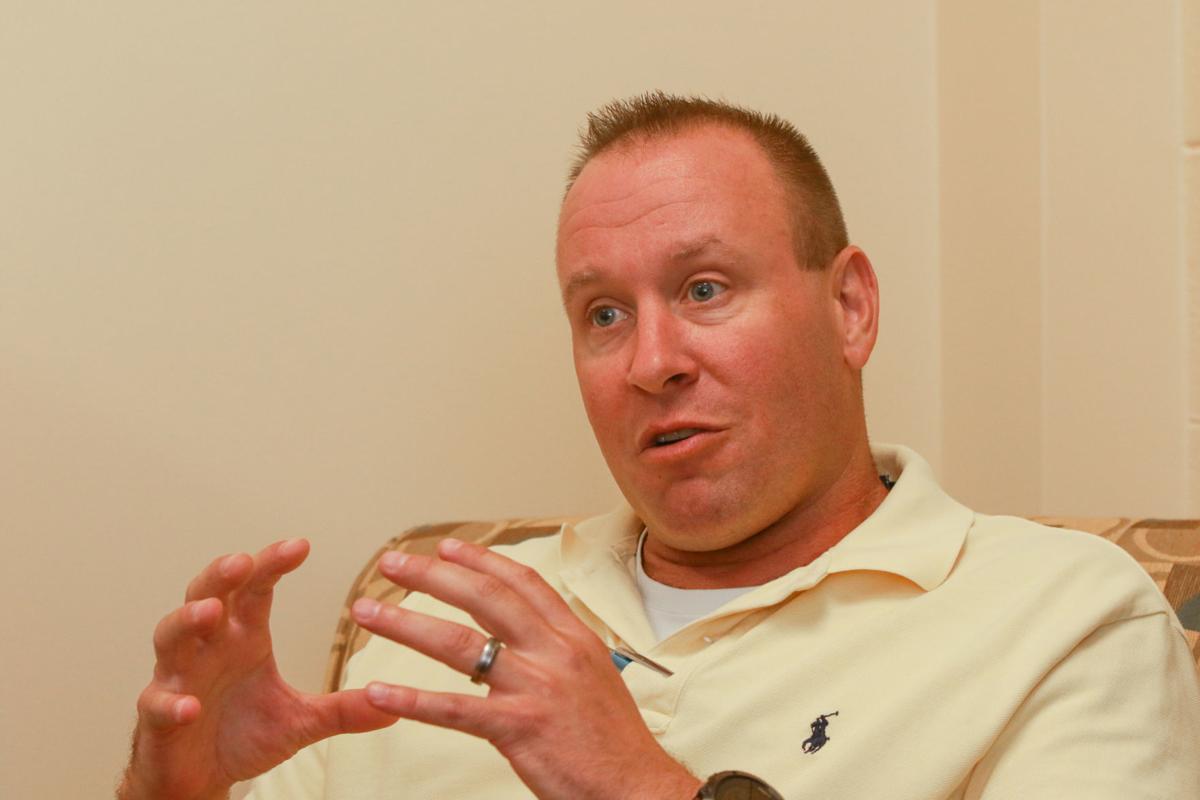 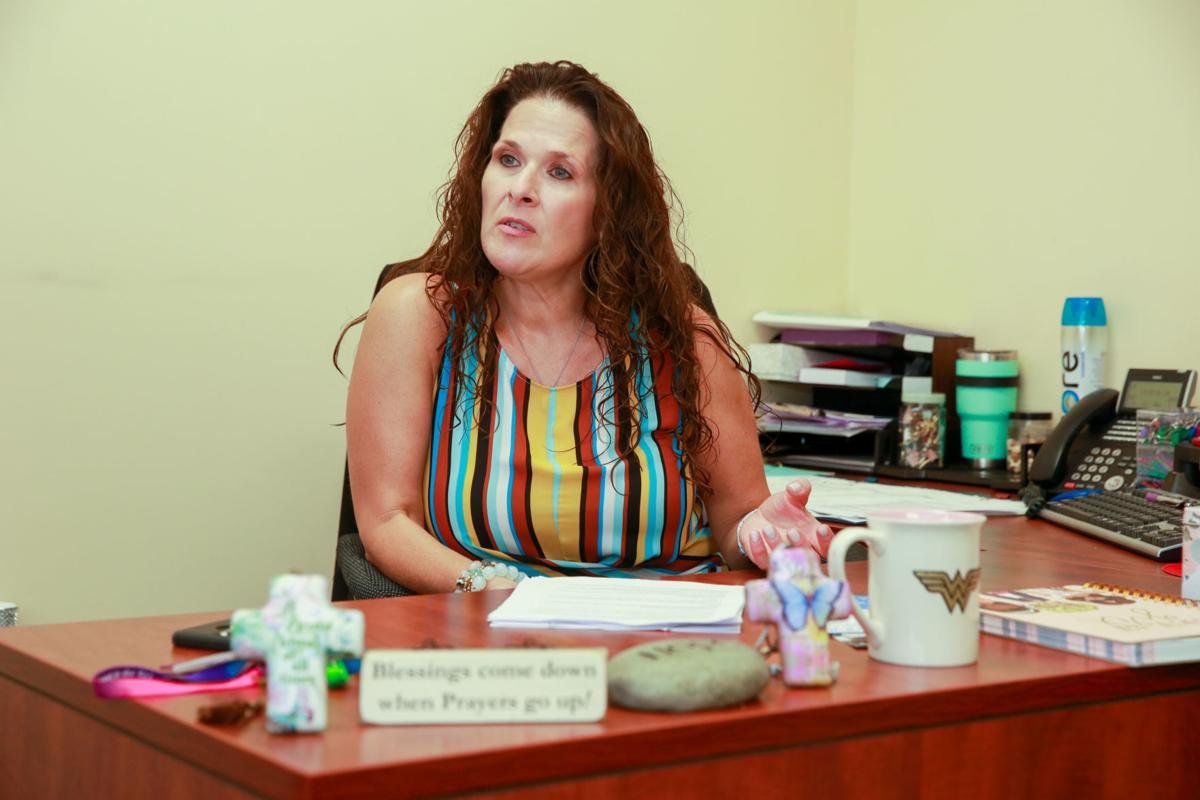 Andrea Graciano talks about helping victims of abuse. “I find myself even more determined to try to help this victim and the family,” she said. “I believe when they see the support they have, that it truly helps them get on their feet and make the decision to leave. The support matters, and that’s why I am here.”

HOBART — Andrea Graciano goes wherever her heart tells her.

But even then, it always has kept her in the Region, leading to various job opportunities — all with the goal of holding offenders accountable and helping victims of sexual assault or domestic violence.

“I really do believe we are placed somewhere for a reason, and that’s why I’m here in Hobart now,” Graciano said. “(So, I can) help grow a program I really believe in.”

On July 15, Graciano’s stint with the Hobart Police Department began, filling its vacant victim’s advocate position, which is part of the agency’s System to End Repeated Violence (SERV) division created about four years ago to handle these types of cases.

It is composed of administrative assistant Samantha Bull, Detective Stephanie Stewart and now Graciano, who all work together to best ensure victims are receiving proper support in a variety of areas and from what Gonzales calls “the three amigas.”

Gonzales said the decision to hire Graciano was a “no-brainer,” especially given her past experience of supporting survivors of abuse throughout the legal process and connecting them to community resources, as well as monitoring offenders on parole.

“She’s got experience on both ends of the spectrum,” Gonzales said. “Her meshing with this organization, I think, is a great thing.”

Graciano’s office can be found tucked inside the SERV division on the second floor of the Hobart Police Department in the 700 block of East Fourth Street.

Visitors are instantly greeted by a medium-sized couch lining the left wall — its tan-patterned seats comfortable from years of continued use. A matching armchair sits almost diagonally across from it, with both perfectly placed in Graciano’s line of sight while she sits at her large desk.

“Wonder Woman” memorabilia lines the tops of one window sill and a bookshelf — gifts from people who’ve associated her with the Amazonian superhero, Graciano said. A reasonable comparison based on the two’s shared dark brown locks and bright blue eyes, as well as their commitment to helping those in need, particularly women.

But despite being called a “Wonder Woman” by many and having an actual costume on hand, which she keeps in her desk drawer, Graciano still doesn’t consider herself one.

“We all have that inner wonder,” said Graciano, as her hands encircled a mug bearing the character’s iconic emblem. “I don’t believe I am Wonder Woman. I believe I can be wonderful at what I do.”

And for several years, that’s what she has striven toward — being wonderful at her job.

Now, she’s responsible for interviewing victims of abuse, making safety plans, conducting follow-ups and providing lists of resources to people who either choose to come to the Police Department or are referred directly by patrol officers who respond to an incident involving a domestic or sexual offense. She also helps victims file protective orders and other legal documents in the court. But above all, Graciano is there to listen — the key component.

“There are so many people — not just women, but men that I’ve worked with, as well — who never knew what it felt like for someone to care about them,” Graciano said. “I think that really sparked an avenue for me to really be determined to make a difference in the community, and I think I have done that to some degree … and I can only hope to continue to do so at Hobart.”

‘All about the control’

Typically, Gonzales said officers respond to about 10 to 15 domestic violence reports a week, with many of the calls involving residences that police have visited before for the same issue.

Gonzales said a report is classified as a domestic if the situation — verbal, sexual or physical assault — involves people who are co-habituating within the same dwelling, such as family members, roommates or intimate partners.

“Responding to domestics as a law enforcement officer is still one of the most dangerous situations to put yourself in to,” Gonzales said. “They are very volatile, and they can go from one end to the other in a split second. … So, we want to make sure we have something in place to protect people — the victims, the responding officers and anyone else who might be involved.”

Since creating the SERV division, Gonzales said those repeat calls are decreasing, with each victim being asked to complete a survey in order for police to rate how dangerous the situation potentially could become. These surveys are then given to Graciano to review to see if a follow-up with the victim is necessary.

Often, people don’t immediately realize they are in an unhealthy relationship, Gonzales said, believing "it would never happen to them, that they'd be able to spot the red flags or would leave the offender." But many don't actually see the signs of abuse, so it's important for the police department to serve as an educational resource to spark that "light bulb moment," he said.

“Despite all of the information that’s out there, people can still be blind to the fact that they may be victims of domestic violence,” Gonzales said. “You just never know what’s going on behind closed doors.”

“It’s not just physical abuse that’s involved — you have emotional, financial, sexual,” Graciano added. “It all boils down to control, and every victim believes it’s going to get better. 'I’m going to be able to change this. He’s not going to do it again, he told me he wouldn’t.' But then he does it again and again.”

According to The National Domestic Violence Hotline, it takes a victim — most commonly a woman — at least seven times to leave before completely staying away from their offender. A statistic Graciano is all too familiar with.

She said victims often are forced to stay in these relationships because the abuser has alienated them socially from their friends and families or financially, causing them to rely solely on the offender. Sometimes, they have their children to worry about, as well.

“I’ve had clients who don’t even have a driver's license or state IDs,” Graciano said. “Things that we all think, 'Why wouldn’t you have that?' But it’s because of the control — it’s all about the control — and they don’t want them to have that. People want to leave, but it’s not that simple.”

Graciano said she’s seen victims stay with their abusers for several decades because their lives are so intertwined and complicated. This often is confusing for people outside of the relationship, who can be quick to judge or blame a victim, becoming frustrated with the situation.

But Graciano isn’t one of those people. In fact, she's motivated by it.

“I find myself even more determined to try to help this victim and the family,” she said. “I believe when they see the support they have, that it truly helps them get on their feet and make the decision to leave. The support matters, and that’s why I am here.”

During her long-standing career, Graciano said one of the biggest changes she’s seen is an increase in community outreach, with people working harder to inform the public of an organization’s existence as a safe place for victims of abuse. But additional advocates and investigators are needed.

“I think that number is growing, and by that growth, we will start to see real change in our community,” she said. “Our division isn’t just any one person, it’s a team, and we’re here to help you in anyway that we can.”

Man dies in motorcycle crash on I-65, police say

MERRILLVILLE — A 35-year-old man died in a motorcycle crash on northbound Interstate 65 early Thursday near U.S. 30, according to Indiana Stat…

CEDAR LAKE — Police said they're going after a motorcycling father who was driving with his 2-year-old son on the handlebars without helmet, e…

'DNA doesn't lie': Siblings put up for adoption reunite in Region after learning of each other's existence via Ancestry.com

ST. JOHN TWP. — In January, Jody Ruble-Castle signed up for Ancestry.com on a whim.

HOBART — The Plan Commission is looking to the future.

Police to increase patrols to watch for stop arm violations

HOBART — With the start of the school year just around the corner, police plan to increase patrols focusing on stop arm violations, starting W…

'Rape isn't a dirty word': Survivor creates 'We Too' event to shine light on sexual assault

VALPARAISO — Twenty-nine years ago, Lori Utesch went to a party.

Andrea Graciano talks about her job as the victim advocate for the Hobart Police Department. “I really do believe we are placed somewhere for a reason, and that’s why I’m here in Hobart now,” Graciano said. “(So, I can) help grow a program I really believe in.”

Andrea Graciano talks about her job as the new victim advocate for the Hobart Police Department.

Andrea Graciano talks about helping victims of abuse. “I find myself even more determined to try to help this victim and the family,” she said. “I believe when they see the support they have, that it truly helps them get on their feet and make the decision to leave. The support matters, and that’s why I am here.”