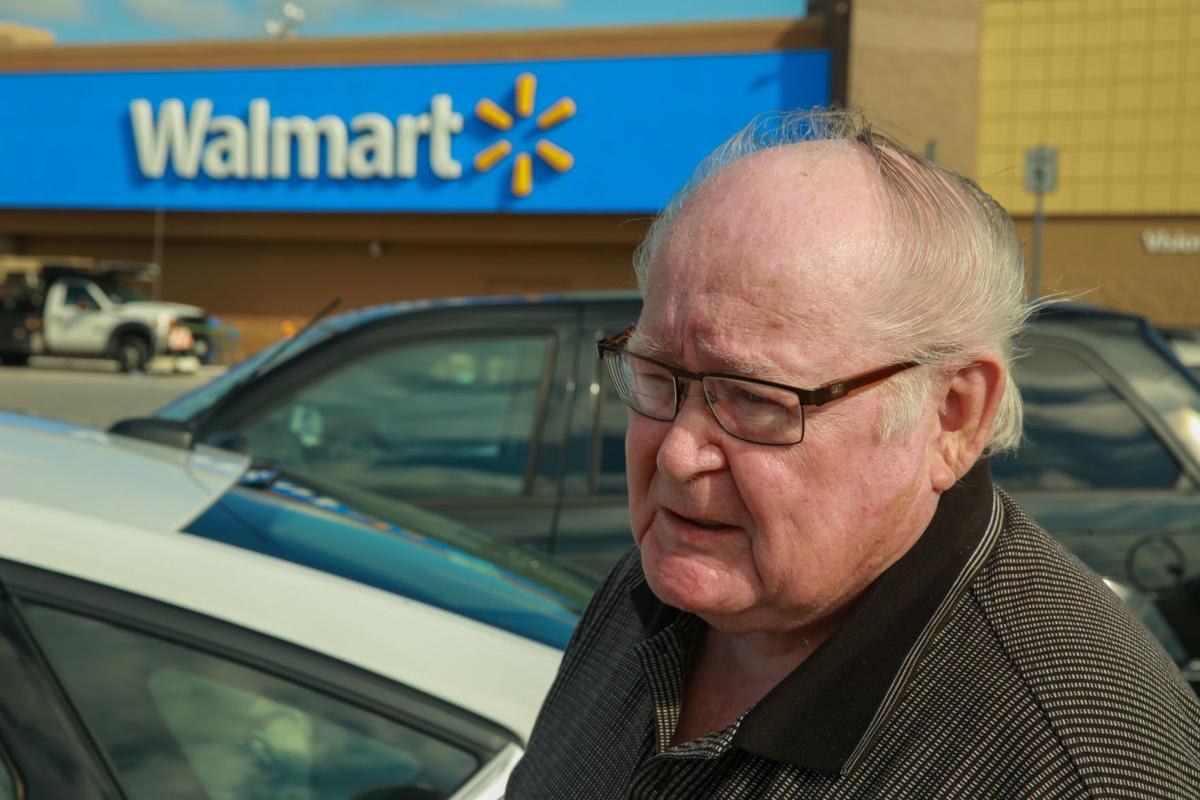 Jesse Clark, of Merrillville, talks about shopping at the Hobart Walmart. 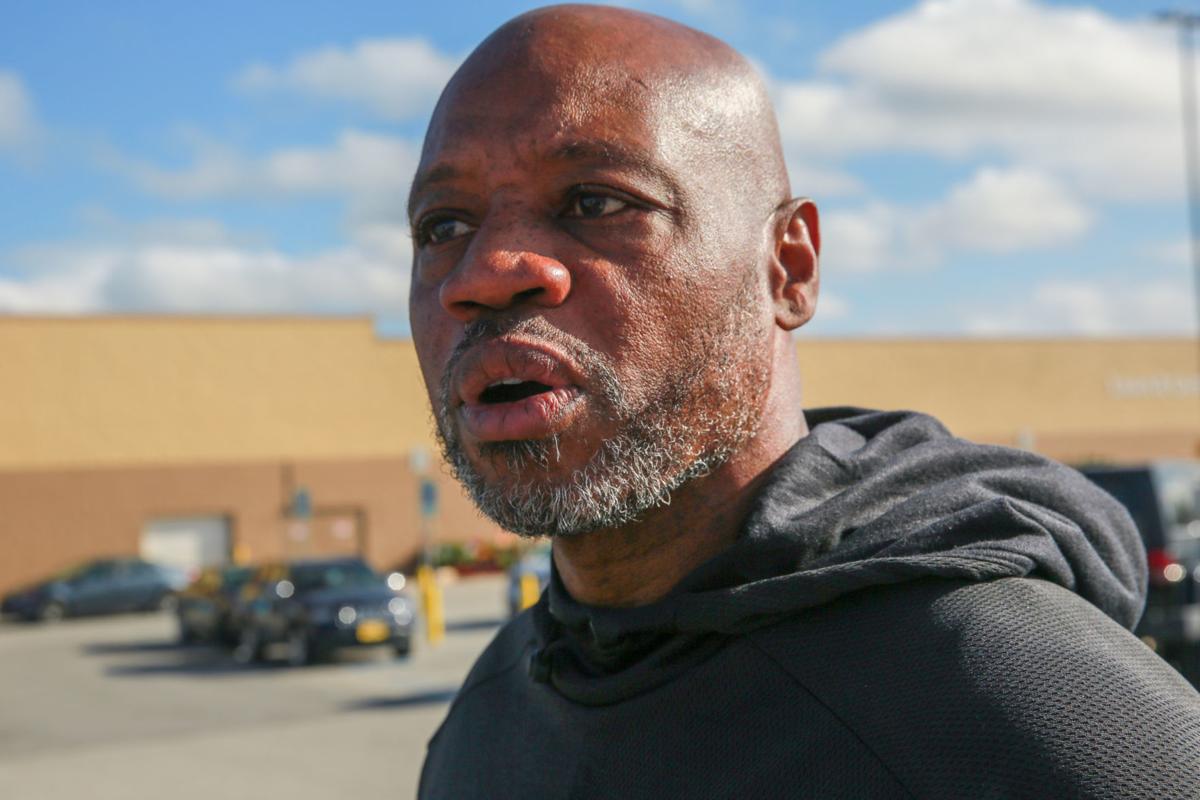 Ken Taylor, of Merrillville, a veteran, talks about shopping at the Hobart Walmart on Wednesday, three days after a shooting in the store. 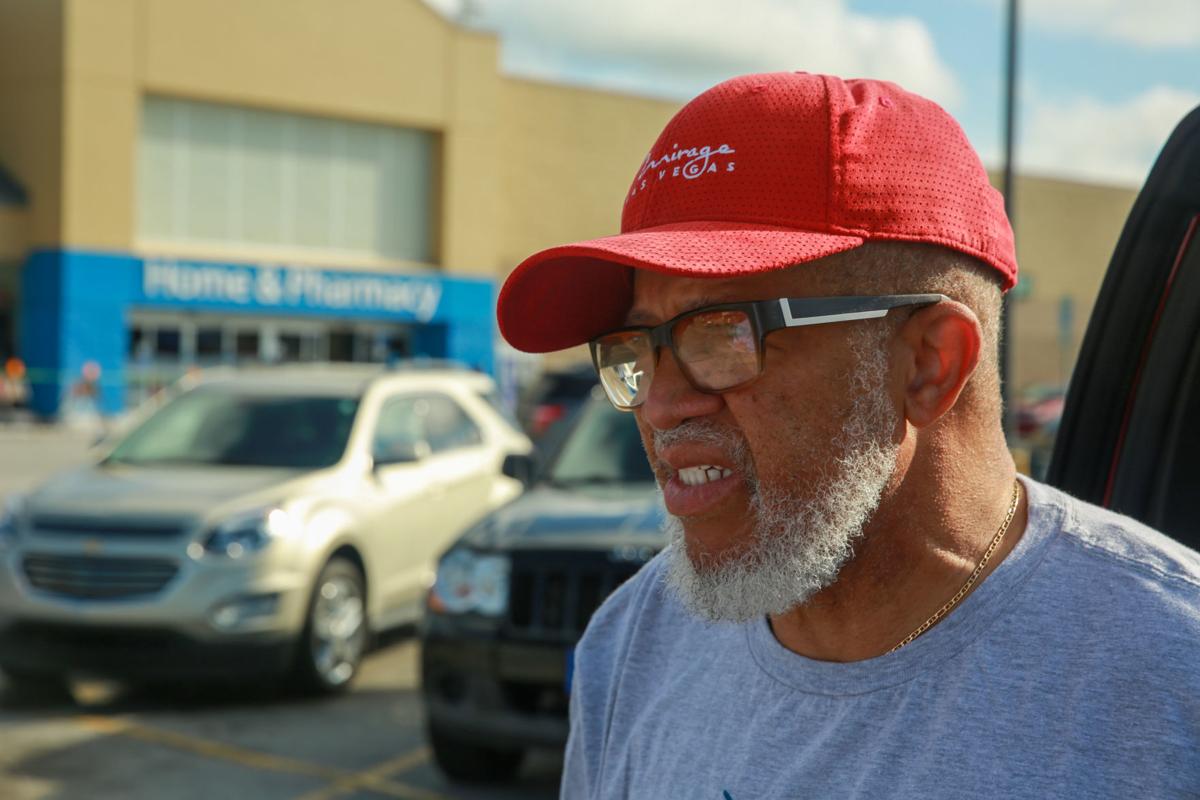 Jimmy Jones, of Merrillville, talks Wednesday about shopping at the Hobart Walmart following a shooting Sunday at the store. 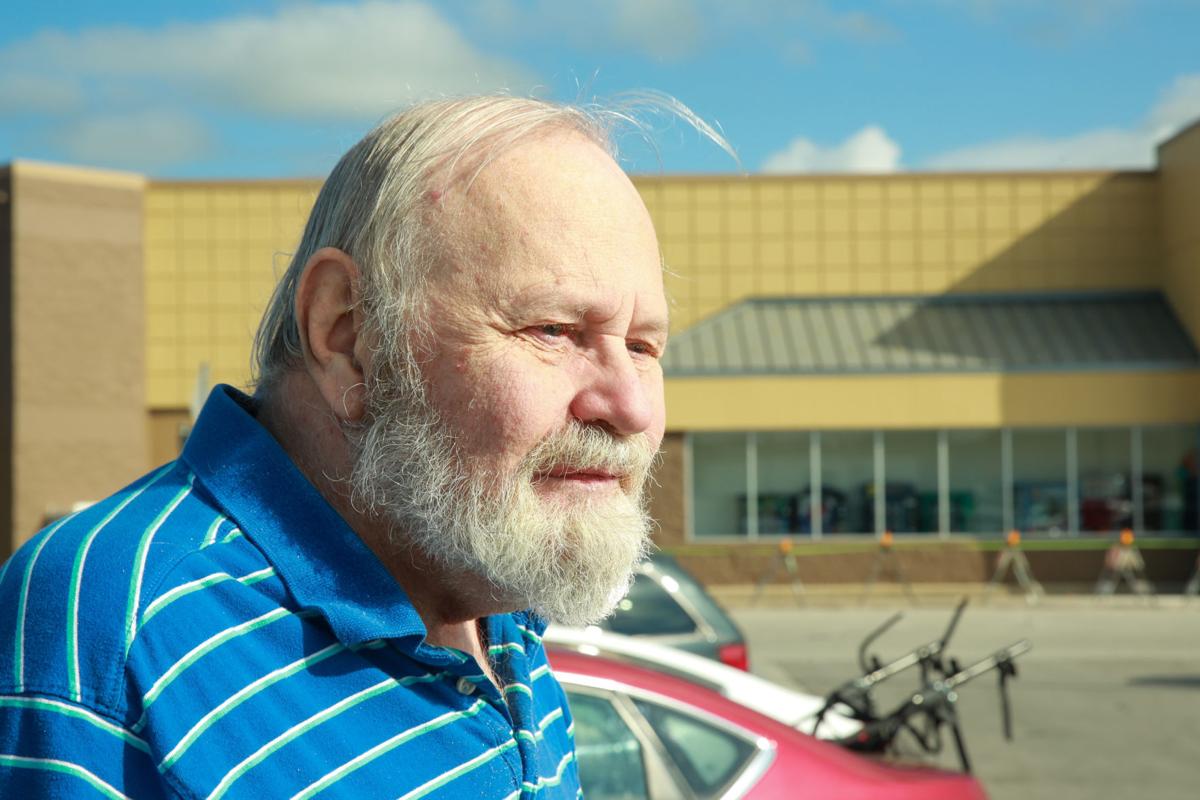 Bob Florig, of Portage, talks Wednesday about shopping at the Hobart Walmart after Sunday's shooting. 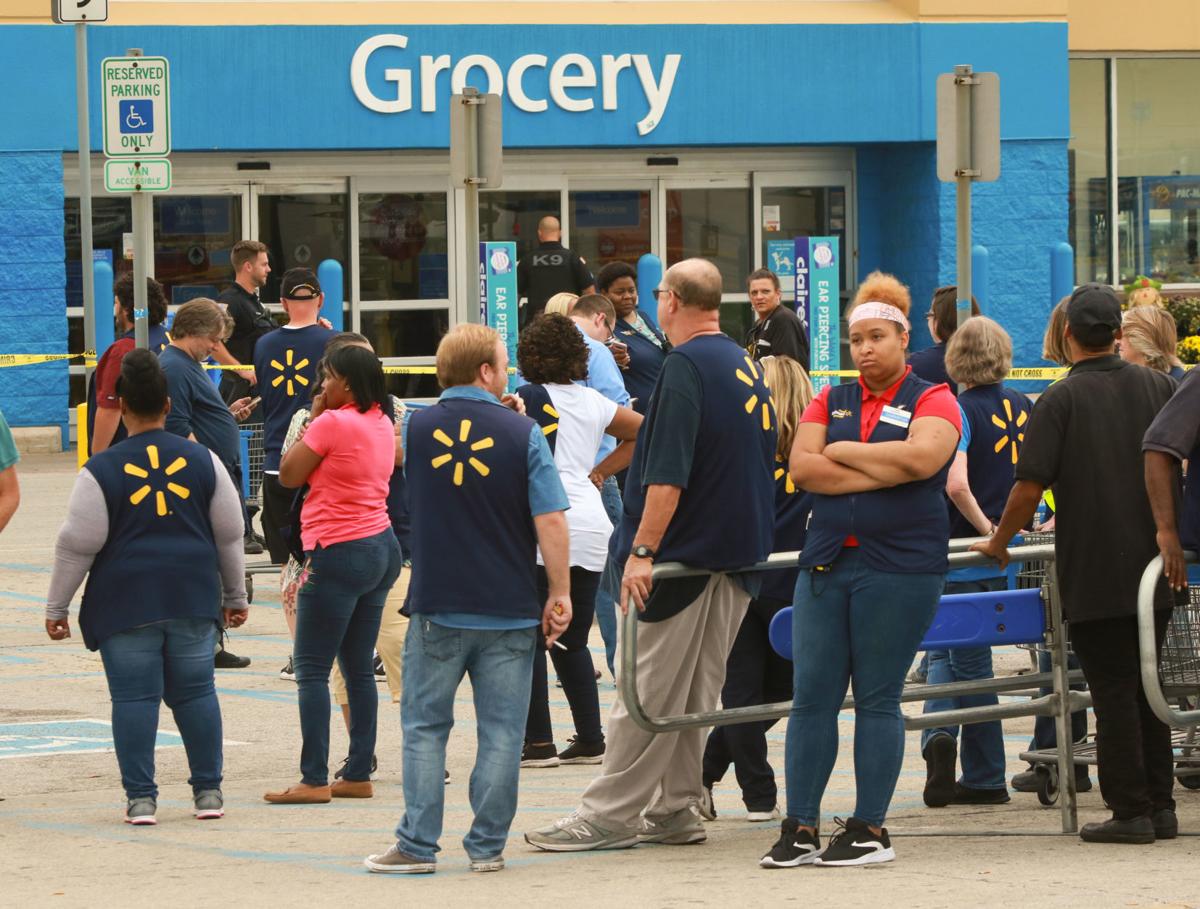 HOBART — It’s back to normal this week for Walmart after a customer was shot and wounded Sunday in the produce section of the Hobart store.

Shoppers on Wednesday — three days after the shooting — were cruising the aisles for bargains and were somewhat fatalistic about the weekend violence.

Some who commented on The Times Facebook page expressed their contempt on social media for the discount retailer and the customers it draws.

Other readers used the weekend violence as the latest debating point on gun control. Some said they wouldn’t shop there because of Walmart’s announcement this week it would discontinue sales of certain gun ammunition and request that customers not carry firearms into the store.

But inside and outside the store in the 2900 block of East 79th Avenue on Wednesday, it appeared to be just another shopping day.

Jimmy Jones, of Merrillville, said Wednesday morning, “That doesn’t concern me because I know it’s happening everywhere. I look at it from a positive level. You just have to have faith and keep going regardless of what is going on. I’ve shopped at Walmart for years. It’s close to home, convenient, and I can find what I want and the prices are reasonable. It could happen anywhere.”

Shopper Ken Taylor, of Merrillville, grew up in Chicago’s Englewood neighborhood and is a veteran.

“I’m always aware of my surroundings," he said. "That’s not because of something that happened a couple of days ago, but it’s a sign of the times.”

About 100 cars Wednesday were in the parking lot, including a Crown Point police car and a Lake County police squad car perched by the grocery store entrance.

A uniformed police officer stood guard by the produce section. One security guard said the day after the shooting, customers came up and thanked them for being there.

The only yellow tape to be seen was around an area in the entrances where workers were removing old, fractured concrete and pouring new concrete walkways to a store that has been serving Hobart/Merrillville for decades.

An off-duty East Chicago police officer took a man into custody. He later was released. Police also arrested a woman accompanying him, but later released her.

The Lake County prosecutor’s office has yet to file charges in the case.

It was the second shooting at the store in less than a year.

Alex Hughes, 27, of Gary, is awaiting trial, now scheduled to begin later this month, on charges of attempted murder, aggravated battery, criminal recklessness and criminal gang and firearm enhancements in connection with a shooting at the store Sept. 30, 2018. A 26-year-old man and his then-9-year-old son were wounded.

Police said both were isolated incidents and not connected with mass shootings reported around the country.

Bob Florig, of Portage, who was shopping at Hobart’s Walmart early Wednesday said Sunday’s events didn’t stop him from going to the store.

“I thought about it," Florig said with a laugh. He worked for years at Walmart stores in Portage and Valparaiso. “They are as safe as any place.”

Jesse Clark, of Merrillville, another shopper Wednesday, said of the Hobart Walmart, “I used to work here back in 2005, 2006 and 2007. It’s a pretty good place, about as good any place. If it’s not here, it’s going to be someplace else. You have to take the good with the bad.”

Others were less sanguine.

The Times asked readers on Facebook for their comment on whether the shootings prompted them to change their shopping habits.

“This would presume I still shop anywhere in Hobart along the US 30 corridor," Michael McLain wrote. "Crime and awful people are the norm through here and very little is done about it. That we now have to be more aware and vigilant of gun violence means I don’t take my family to that Walmart, the mall, or any of these stores anymore.”

Lynsie Funkhouser Cummins wrote, “Yes, it definitely does. Not JUST Walmart, any store/restaurant/public building that I enter, I'm now checking where the emergency exits are. I'm seeing the type of display or bathroom that I can shove my kid into to keep him safe. It's sad that this is the world we live in, but we as the public unfortunately are in a position that we HAVE to watch everything we do and we need to have those sorts of plans in place."

Keith Sealeeya wrote, “I'll continue to shop there ... and I always conceal carry and have for the last 23 years."

Kathy Fisher Ramos wrote, “I carry a gun, and I'm well trained. I'm not afraid to shop anywhere because I can protect myself."

Elizabeth Vargas wrote, “I open Carry and conceal Carry why should I change open carrying! It is my right and for my protection to carry a gun even if I want it showed!"

Andrew O’Brien stated, “No, but them being anti 2A & discontinuing the sales of ammunition & firearms has.”

Scott Skoney wrote, “I love all the concealed carry wanna be heroes on here. News flash. Cops can’t tell a good guy with a gun from an active shooter. You’re more likely to get shot if you whip out your pistol and confront someone in the store.”

Bill has reported in Lake County since 1972 after graduating from Indiana University. He has worked for The Times since 1997, covering the courts and local government during much of his tenure. Born and raised in New Albany, Ind., he is a native Hoosier.

More in This week in local crime news: Man likely to spend rest of life in prison after molesting two young girls (42 of 49)

HOBART — Bill Johnsen had just intended to buy fishing supplies and brownie mix from the Walmart off U.S. 30 late Sunday afternoon during a sh…

Man in stable condition after Walmart shooting; 1 still in custody

HOBART — A 23-year-old Merrillville man is in stable condition after being shot Sunday in a Walmart off U.S. 30, police say.

HOBART — Police took two people into custody and recovered weapons Sunday afternoon after a man was shot inside the Walmart off U.S. 30, an of…

Walmart is removing from its stores nationwide signs, displays or videos that depict violence following a mass shooting at one of its stores i…

CALUMET CITY — Police are investigating a shooting that wounded a 20-year-old man at a street intersection in Calumet City.

Jesse Clark, of Merrillville, talks about shopping at the Hobart Walmart.

Ken Taylor, of Merrillville, a veteran, talks about shopping at the Hobart Walmart on Wednesday, three days after a shooting in the store.

Jimmy Jones, of Merrillville, talks Wednesday about shopping at the Hobart Walmart following a shooting Sunday at the store.

Bob Florig, of Portage, talks Wednesday about shopping at the Hobart Walmart after Sunday's shooting.