The Indiana Court of Appeals has unanimously affirmed the murder conviction of a Gary man who shot and killed 69-year-old Alonzo Smith Sr. four years ago in East Chicago.

Stephen Shelton, 54, is serving a 60-year prison term for shooting Smith on April 29, 2017, while Smith was sitting in a silver Chevrolet Impala parked at Wallace Metals, 1200 E. Chicago Ave.

According to court records, Shelton fired twice at the driver's side of Smith's car, wounding Smith, and sending his car rolling forward where it struck a passing truck and ultimately crashed into a fence at a building across the street.

Smith was pronounced dead when he arrived at the hospital. A forensic investigation determined the cause of death was multiple gunshot wounds, records show.

In his appeal, Shelton claimed there was insufficient evidence to sustain his murder conviction because no one directly witnessed him shooting Smith.

The appeals court disagreed. It said DNA evidence linking Shelton to the gun, glove and ski mask unquestionably used by the perpetrator, and multiple witnesses seeing someone with Shelton's unique walking style leaving the shooting scene, along with the other evidence presented at trial were more than enough to justify a murder conviction.

At the same time, the appellate judges agreed with Shelton that prosecutors inappropriately suggested through a detective's testimony that Shelton's demeanor during interviews with law enforcement was evidence of his guilt.

However, the failure of Shelton's attorney to object to the testimony at trial, and the other overwhelming evidence Shelton shot and killed Smith, overrode any basis for reversing Shelton's conviction based on fundamental error, the appellate judges said.

"We conclude that the evidence was sufficient to sustain Shelton's conviction and that though error occurred, it did not amount to fundamental error requiring that Shelton’s conviction should be reversed."

Shelton still can ask the Indiana Supreme Court to review his case and consider overturning his murder conviction.

Otherwise, his earliest possible release date from prison, assuming good behavior, is Oct. 17, 2062, when Shelton will be 95 years old, according to the Indiana Department of Correction. 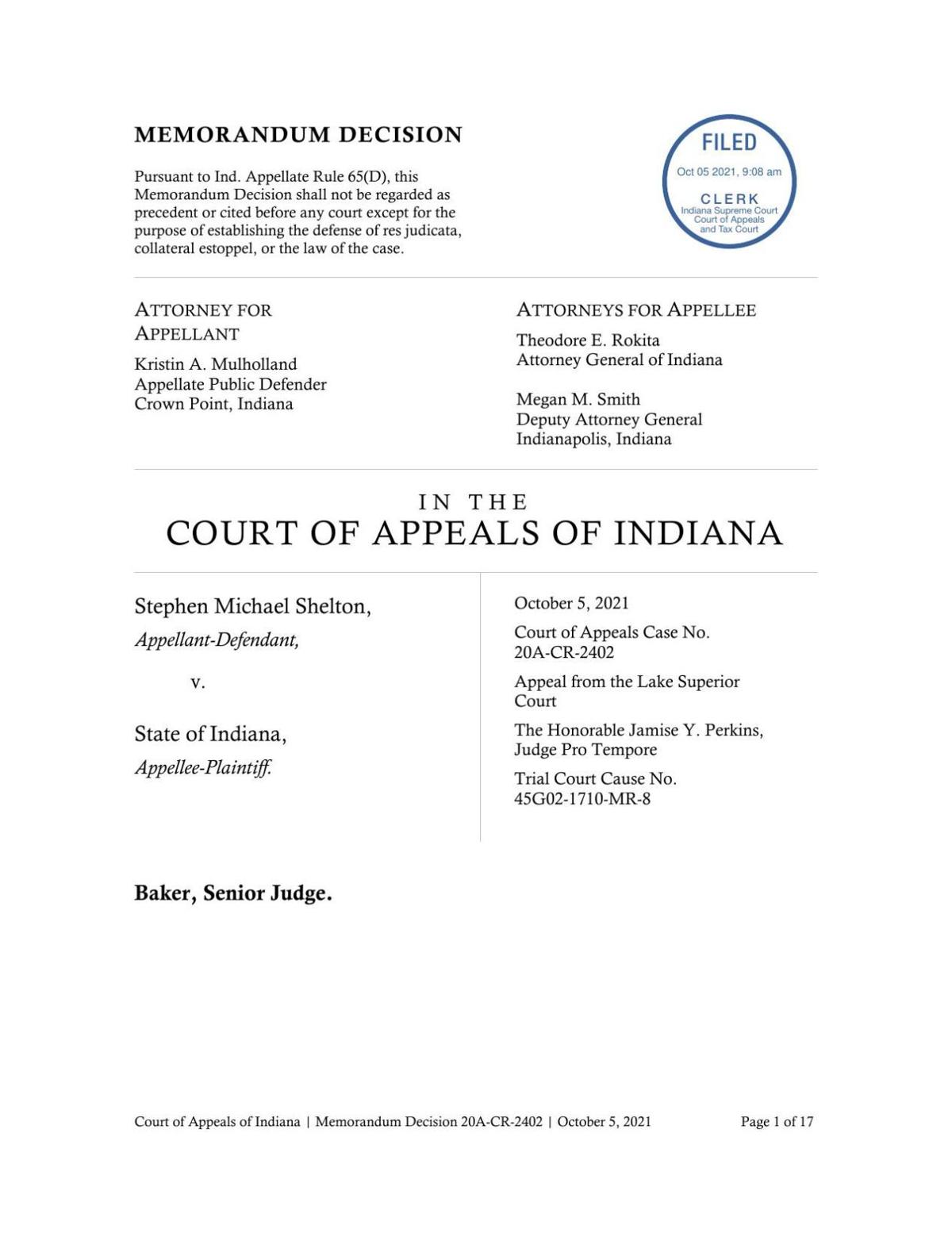 Jury convicts man of murder, despite suggestion another could have been responsible

Joel Markovich's testimony will be important, because he was the only witness to see the murder suspect's hat fall off, Lake County Deputy Prosecutor Jennie Bell said. DNA from the hat was later linked to a defendant scheduled to stand trial next week, records show.

A 43-year-old man fired multiple shots at police, and managed to avoid several shots fired by police, during a daylong standoff Saturday in Calumet City, Illinois.