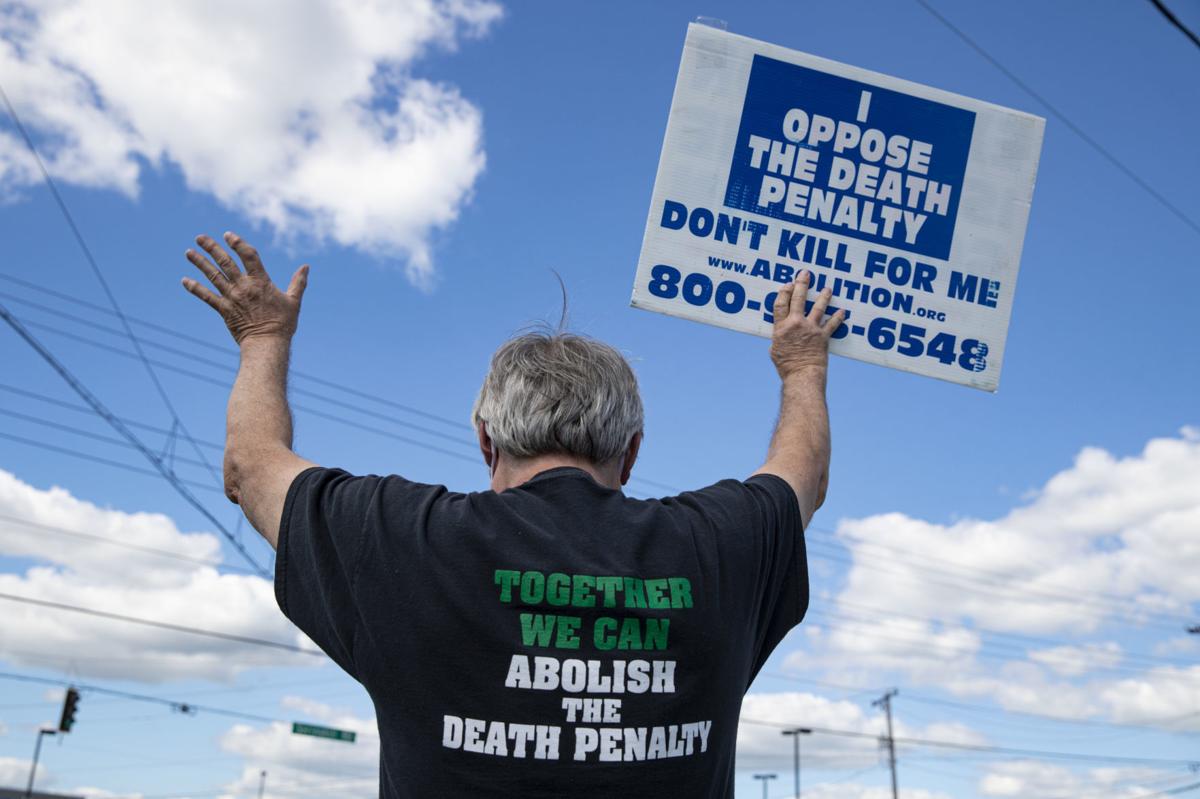 Protesters against the death penalty gather in Terre Haute, Ind., Monday. Daniel Lewis Lee, a convicted killer, was scheduled to be executed at 4 p.m. in the federal prison in Terre Haute. 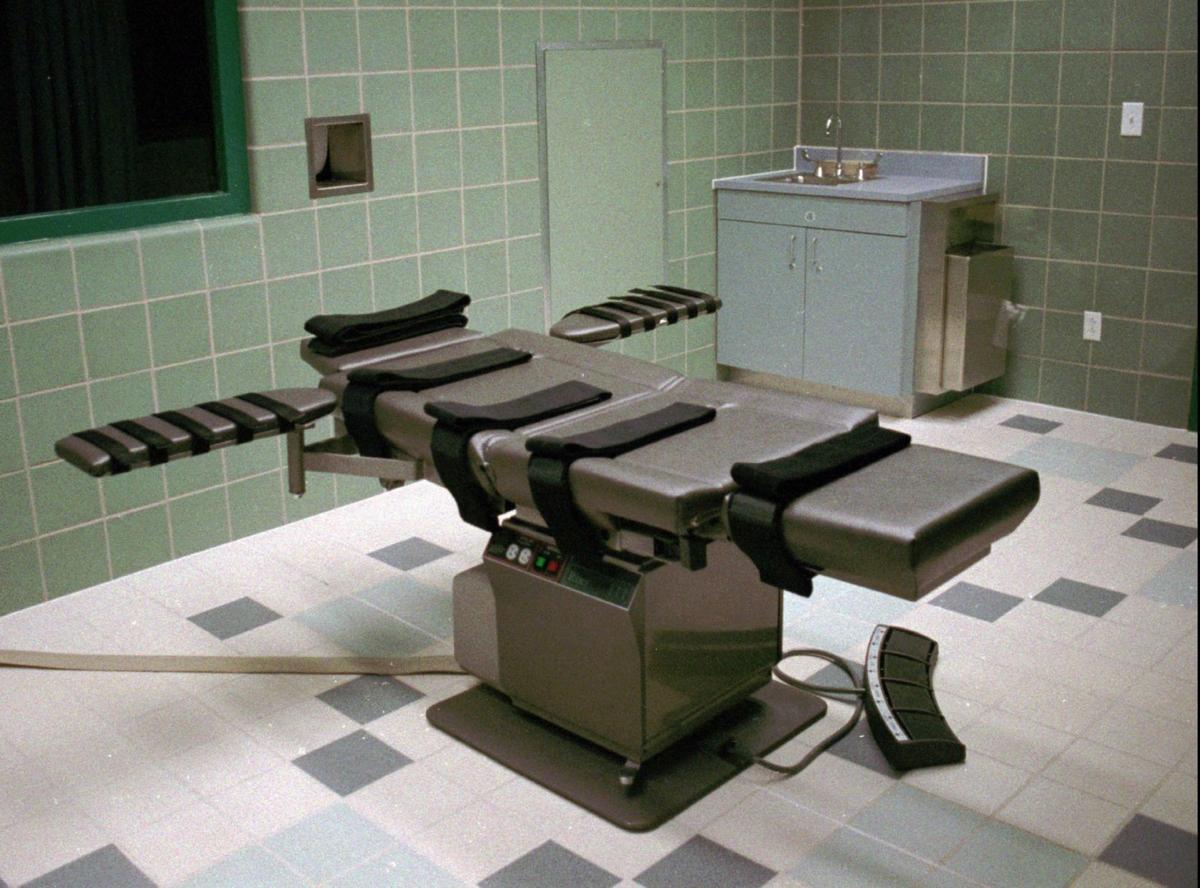 This March 22, 1995, file photo shows the interior of the execution chamber in the U.S. Penitentiary in Terre Haute. 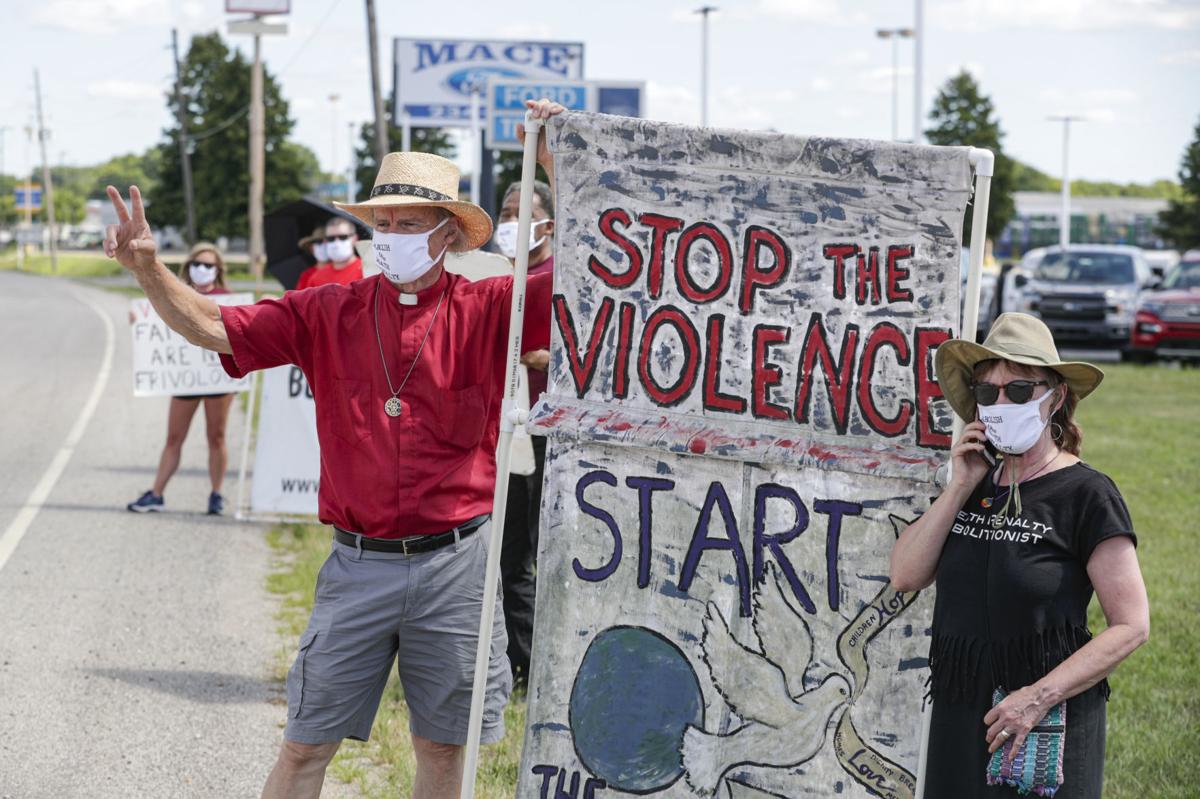 Protesters against the death penalty gather Monday in Terre Haute. 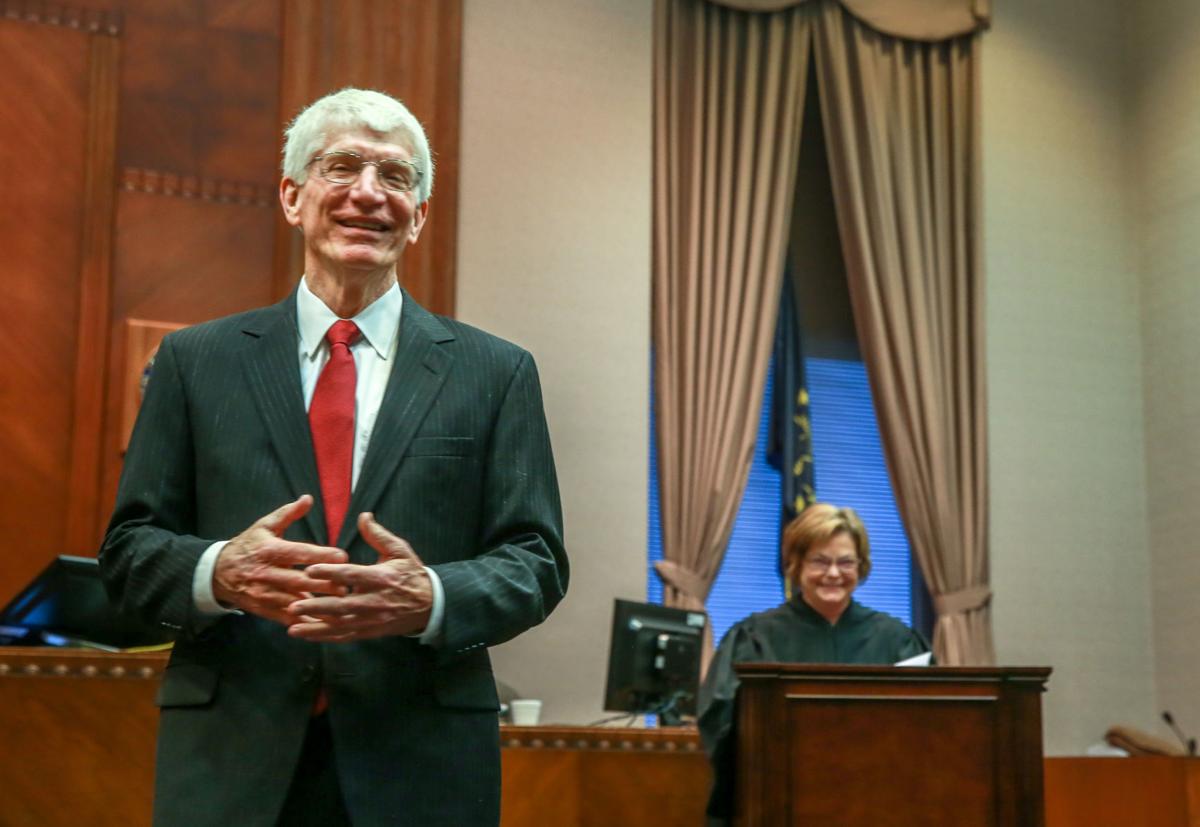 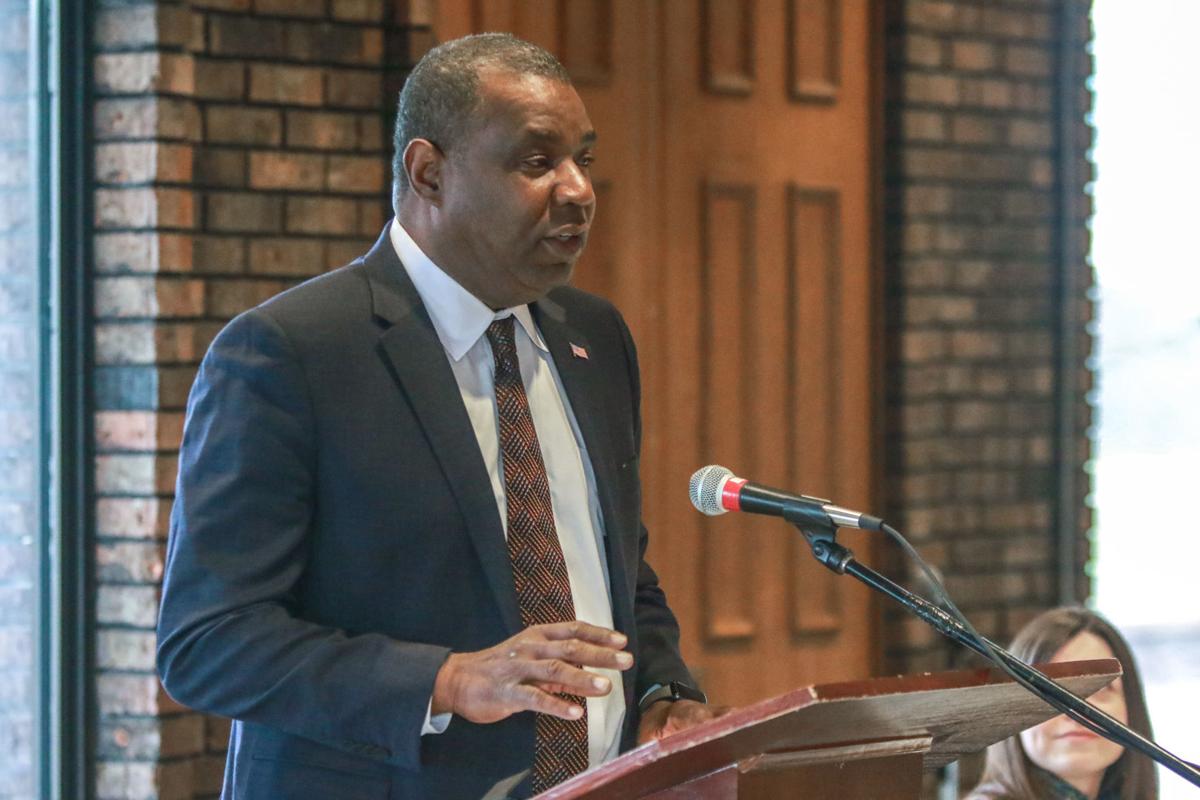 Porter County's top prosecutor said he had doubts 30 years ago when called upon as a public defender to represent one of three men accused of abducting, raping and murdering a 19-year-old convenience store clerk.

But he took it on.

Despite the hate mail and calls, Germann sought out the necessary training to become one of only a small number of defense attorneys around the state qualified to handle death penalty cases.

His last capital case was seven or eight years ago, and the issue of the death penalty has largely been on the back burner until just recently when the federal government began a push that resulted Tuesday morning in the first federal execution in 17 years.

Daniel Lewis Lee, 47, of Oklahoma, was executed by lethal injection at 8:07 a.m. EDT at a federal prison in Terre Haute, Indiana.

The issue has awakened memories for Germann, who now is on the other end of the judicial scale as the elected criminal prosecutor for a county whose home seat is in Valparaiso.

US carries out the 1st federal execution in nearly 2 decades

While prepared to carry out his role as a prosecutor by pursuing a death penalty case if warranted, Germann said he feels society is not as supportive as it once was of this ultimate form of punishment.

He pointed out the number of states that have eliminated it as an option in the past several years, including neighboring Illinois.

Capital punishment is authorized in 28 states, and the federal government and the military, according to the National Conference of State Legislatures.

Indiana is among those 28 states, though it has not carried out an execution since Dec. 11, 2009, according to statistics kept by the Indiana Department of Correction.

There are 10 people on death row in Indiana — nine men and one woman.

Of the 61 federal inmates currently on death row, Michigan City resident Odell Corley is the only one from Indiana, according to the Washington, D.C.-based nonprofit Death Penalty Information Center.

Corley, who goes by the name Nasih Ra'id, was convicted in 2004 of fatally shooting two Porter County bank clerks during a botched robbery two years earlier.

One of Germann's nearby criminal justice colleagues believes the death penalty still has a place in our justice system.

The death penalty option must be retained for the "worst of the worst" offenses, including qualified offenses against children and police officers, Carter said.

"We have to protect our police men and women," he said.

Carter, who has been Lake County's prosecutor since 1993, said his office has pursued about 10 death penalty cases, five of which he was involved in directly.

The last of these was the 2013 conviction of Gary resident Kevin Isom for the murders in 2007 of Isom's wife and two stepchildren. He was sentenced to death three days after that conviction.

Isom, 54, is currently being held at the Indiana State Prison in Michigan City awaiting his fate, according to the DOC online offender search tool.

Germann said prosecutors seem to be pursuing fewer death penalty cases, in part, because of the enormous costs of preparing for trial and decades of appeals.

"This is all at the public's expense," he said.

"After that case, I couldn't do it anymore," he said.

Carter said his decision process in pursuing the death penalty includes meeting with the families of victims to see "what their sense of justice is."

He serves on a statewide panel that reviews potential death penalty cases brought to it by prosecutors.

Archbishop Paul S. Coakley, of Oklahoma City, who serves as chairman of the U.S. Conference of Catholic Bishops' Committee on Domestic Justice and Human Development, issued a June 30 statement saying, "As Pope Francis articulated through the Catechism of the Catholic Church, the death penalty is unacceptable as an affront to the Gospel and to respect for human life."

"To oppose the death penalty is not to be 'soft on crime,'" he said. "Rather, it is to be strong on the dignity of life."

Coakley made a failed plea last month for Attorney General William Barr and President Donald Trump to abandon their push to preside over the first federal executions in 17 years.

Two other federal executions are scheduled for later this week.

Carter said he opposes states eliminating the option of the death penalty and would like to see uniformity across the country on the issue.

"It's what the people want," he said.

A U.S. district judge on Monday ordered a new delay in federal executions, hours before the first lethal injection was scheduled to be carried out at a federal prison in Indiana.

Protests have spread to Northwest Indiana as national unrest grows.

Motorists are encouraged to avoid the area of Ind. 49 and U.S. 30 from Wednesday into next week as a result of lane closures caused by resurfacing work, according to the Indiana Department of Transportation.

Wesley Ira Purkey, convicted of a gruesome 1998 kidnapping and killing, was scheduled for execution Wednesday at the U.S. Penitentiary in Terre Haute.

Young people have made up the largest percentage of new confirmed cases of the coronavirus in Chicago in recent weeks and city officials warned that the trend could lead to the closure of bars or other businesses.

US executes 2nd man in a week; lawyers said he had dementia

Wesley Ira Purkey was put to death at the Federal Correctional Complex in Terre Haute.

A meth kingpin who killed five people, including two young girls, in 1993 to thwart his prosecution for drug trafficking is set to become the third federal inmate to be executed this week.

Complaints against Chicago police officers rose to record levels amid protests throughout the city following the death of George Floyd in Minneapolis, city data shows.

A new lawsuit accuses the Indiana State Police of unlawfully preventing death penalty opponents from demonstrating outside the federal prison in Terre Haute during recent executions.

A judge halted the federal government's planned execution of a man who kidnapped, raped and killed a 10-year-old girl, saying the law requires the government to get a prescription for the drug it plans to use.

5th federal execution of 2020 on again after drug ruling

The scheduled federal execution of a 10-year-old girl's killer was back on track Friday after an appellate panel tossed a lower court's ruling that would have required the government to get a drug prescription before it could use pentobarbital to kill the man.

A Gary man sentenced to death has exhausted his state court options for overturning his conviction and death sentence, and must now seek relief in federal court if he is to stay alive.

Protesters against the death penalty gather in Terre Haute, Ind., Monday. Daniel Lewis Lee, a convicted killer, was scheduled to be executed at 4 p.m. in the federal prison in Terre Haute.

This March 22, 1995, file photo shows the interior of the execution chamber in the U.S. Penitentiary in Terre Haute.

Protesters against the death penalty gather Monday in Terre Haute.