The Indiana Supreme Court has expanded the limited number of people eligible to recover damages for negligent infliction of emotional distress.

Typically, a lawsuit seeking payment for emotional distress only can be pursued in Indiana by a person who suffers a direct physical injury, suffers an injury that also injures or kills a third-party, or witnesses a relative's death or severe injury immediately after it occurs.

The new rule follows the 2015-16 sexual assault of a profoundly disabled child by an instructional assistant responsible for her care at a school in the Metropolitan School District of Pike Township in Indianapolis.

According to court records, the perpetrator eventually confessed to her actions some two years afterward. She later pleaded guilty to child molesting and received a 13-year sentence.

In 2019, the child's mother sued the perpetrator, the school, and the school district claiming she suffered emotional distress because of the sexual assault of her child, ultimately compromising her ability to care for her daughter at home and forcing her to incur expenses for the child's placement in a chronic care facility.

Records show the mother's lawsuit was turned away by lower courts because her claims didn't fit any of the categories for which damages for emotional distress can be pursued, primarily because she did not witness the abuse and only learned of it years later.

"Justice compels us to fashion a rule permitting a claim for damages limited to circumstances like those presented here," said Goff, in a 21-page opinion joined by Chief Justice Loretta Rush and Justice Steven David.

Goff acknowledged only a handful of states have similarly waived the proximity requirement for emotional distress claims involving the sexual abuse of a child.

But, he insisted, while Indiana often assumes a cautiously progressive approach to its law "more than once the state has taken a road less traveled," which Goff said is the appropriate course here.

He said the specific facts of this case perfectly align with the Supreme Court's new rule and he ordered the mother be permitted to proceed to trial against the defendants on her emotional distress claim.

"Because every person could be expected at some point to learn of the death or serious injury of a loved one through indirect means, there must be a point at which a defendant’s exposure to liability for negligent infliction of emotional distress ends," Slaughter said.

"Only time will tell whether today’s watershed rule is so narrow and fact-specific that it proves to be a one-way ticket for this ride only — or whether, as I suspect, it is the proverbial camel’s nose under the tent, with the rest of the camel soon to follow."

To that end, Slaughter suggested any expansion of emotional distress liability is a task best left to the Legislature instead of the courts. 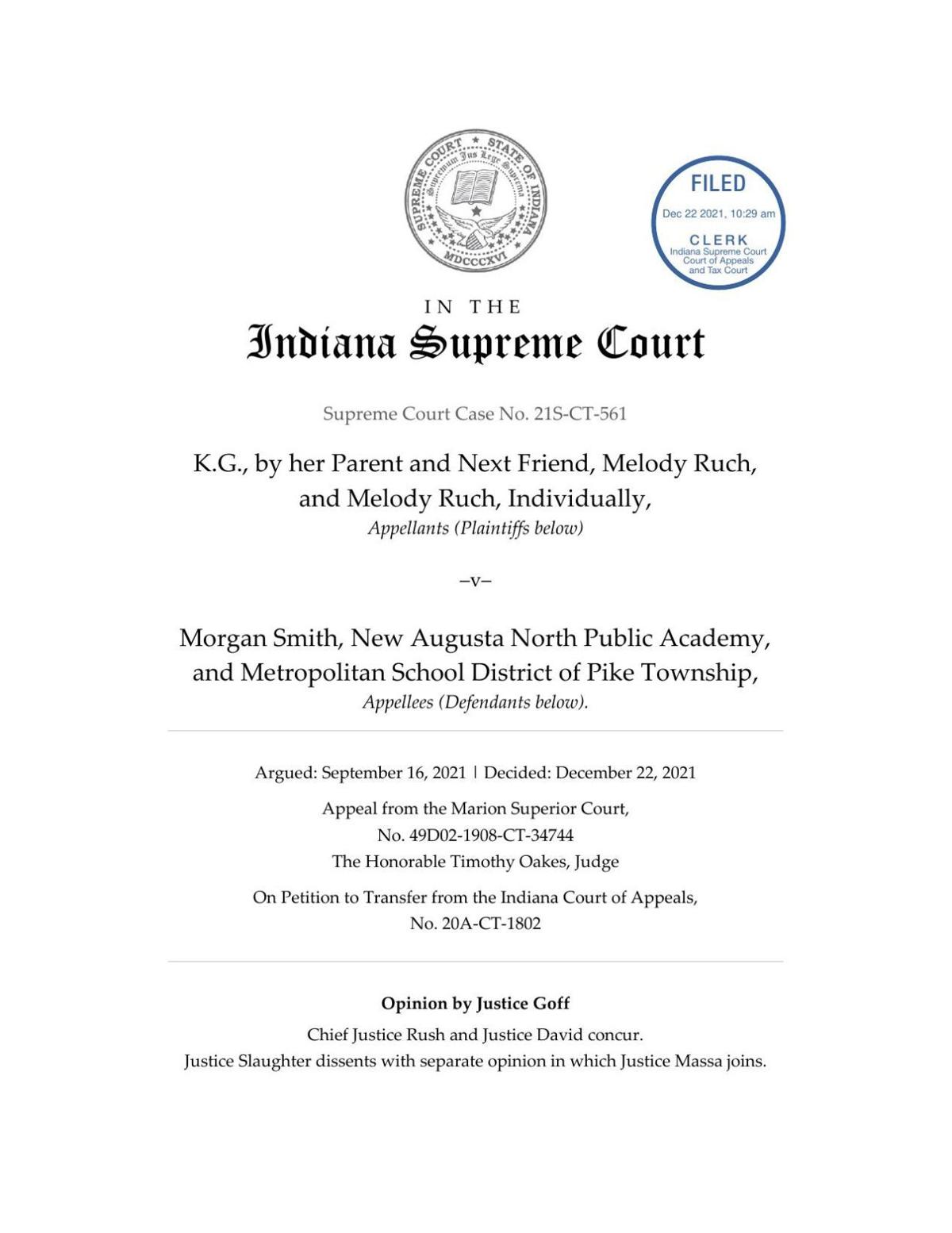 The Indiana Court of Appeals has ruled a LaPorte man convicted of child molesting and sexual misconduct with a minor is entitled to no reduction in his 36-year prison sentence.

The Indiana Department of Transportation typically is not liable for a loss or injury resulting from the temporary condition of a public thoroughfare that results from weather.

The Indiana Supreme Court has decisively resolved the legal status of the entity that operates the South Shore commuter rail line linking Northwest Indiana to Chicago.

A Lake County judge has rejected the state's effort to preemptively dispose of a lawsuit challenging the basis for continued vehicle emissions testing in Lake and Porter counties.

A group of landlords will get a chance to argue the City of Hammond owes each of them a $75 refund for rental registration fees paid in 2015 they claim exceeded the $5 maximum permitted by state law.

The order withdrawing the ruling follows an article in The Times suggesting the appeals court may have mistakenly applied the 2021 eminent domain statute, instead of the law in effect in 2019.

The National Weather Service has issued a winter weather advisory, in effect from 9 a.m. to 6 p.m. Tuesday, for Lake County and all portions of Illinois located north of Interstate 80.

Lake County Coroner Merrilee Frey is asking for the public's assistance to locate relatives of a deceased 74-year-old Hobart man.

Altogether, 369 people were hospitalized with COVID-19 in Northwest Indiana Sunday, including both ICU and standard patients, according to the Indiana Department of Health.

Altogether, 170 additional Indiana residents have died from COVID-19, including 23 people on Christmas Eve and 34 people on both Christmas Day and Sunday, according to preliminary counts.

The deadline to submit the comprehensive required paperwork — including background information, writing samples, references, educational transcripts, and letters of recommendation — is Feb. 4.

Indiana Chief Justice Loretta Rush said a statewide breakdown in mental health care has led many people with mental illness to languish in county jails, instead of receiving the treatment they need.

An appellate judge originally from Northwest Indiana is among the three candidates from which Gov. Eric Holcomb will appoint a new justice for the Indiana Supreme Court.