The Indiana Supreme Court has reinstated the involuntary manslaughter conviction of a Long Beach man in what may be the final legal twist stemming from the Dec. 11, 2012, shooting death of Stacey Larkin.

In a 4-1 decision, the state's high court overruled the acquittal issued Nov. 9, 2020, by the Indiana Court of Appeals and restored the original guilty verdict against John B. Larkin, including his yet to be served two-year prison sentence.

Under Indiana law, voluntary manslaughter is knowingly or intentionally killing another person while under "sudden heat," or an instant burst of rage or anger, while involuntary manslaughter means killing a person while committing battery, which by statute is knowingly or intentionally touching another person in a rude, insolent or angry manner.

Massa said involuntary manslaughter was a factually included lesser offense throughout Larkin's trial because the charging document alleged Larkin knowingly or intentionally killed his wife with a handgun, and Massa said shooting a person can be classified as a battery.

The high court justices also rejected Larkin's claim of not receiving fair notice of the involuntary manslaughter charge because they held both types of manslaughter were based on the same means: the handgun.

According to court records, Stacey Larkin, 41, was shot twice in her bedroom while struggling with John Larkin over a defective gun that DNA evidence showed Stacey Larkin removed from a bedroom safe.

John Larkin claimed the gun discharged the first time when Stacey ran at him and they fell. She reportedly then jumped up, grabbed his head and scratched his face. He pushed her away, and the gun discharged a second time as he fell on her, court records state.

Larkin argued he did not knowingly shoot Stacy, it was an accident, and a person in Indiana has a right to use deadly force if he believes the force is necessary to prevent serious bodily injury to himself or another person.

The Supreme Court, however, said prosecutors presented sufficient evidence to overcome Larkin's self-defense claim, including Larkin's own statement acknowledging he grabbed the gun from Stacey and escalated the situation with inflammatory remarks.

The justices also were unconvinced that Larkin's conviction should be overturned due to prosecutors initially failing to disclose the gun was defective.

While the high court said it did not condone the lack of disclosure — "particularly in case already rife with misconduct" — it concluded the information ultimately was provided to Larkin with sufficient time for him to prepare a defense.

"Because we reject all of Larkin's arguments, we affirm the judgment of the trial court," Massa said.

Justice Steven David dissented from the ruling. He suggested it's likely to lead to numerous additional cases where Indiana prosecutors try to sneak in lesser included offenses during trials that seem unlikely to result in top charge convictions.

"The state had over six years within which it could have amended the charging information to include an involuntary manslaughter charge against Larkin or mention some form of battery, but it did not do so," David said.

"If the state wants to be able to seek a lesser included conviction based on involuntary manslaughter, it should clearly and plainly allege a battery in the charging information."

The lengthy delay in the case was due to a prior trip to the state's high court in 2018 to resolve multiple issues of police and prosecutor misconduct, including police continuing to question Larkin after he invoked his right to counsel and several people in the prosecutor's office eavesdropping on a private conversation between Larkin and his attorney.

The Supreme Court also previously found evidence that police changed a statement about past interactions with Stacey Larkin and tampered with the safe that housed the Larkins' gun while the safe was being stored as evidence.

Court records show Bradford excluded any evidence he determined to be tainted prior to Larkin's trial. 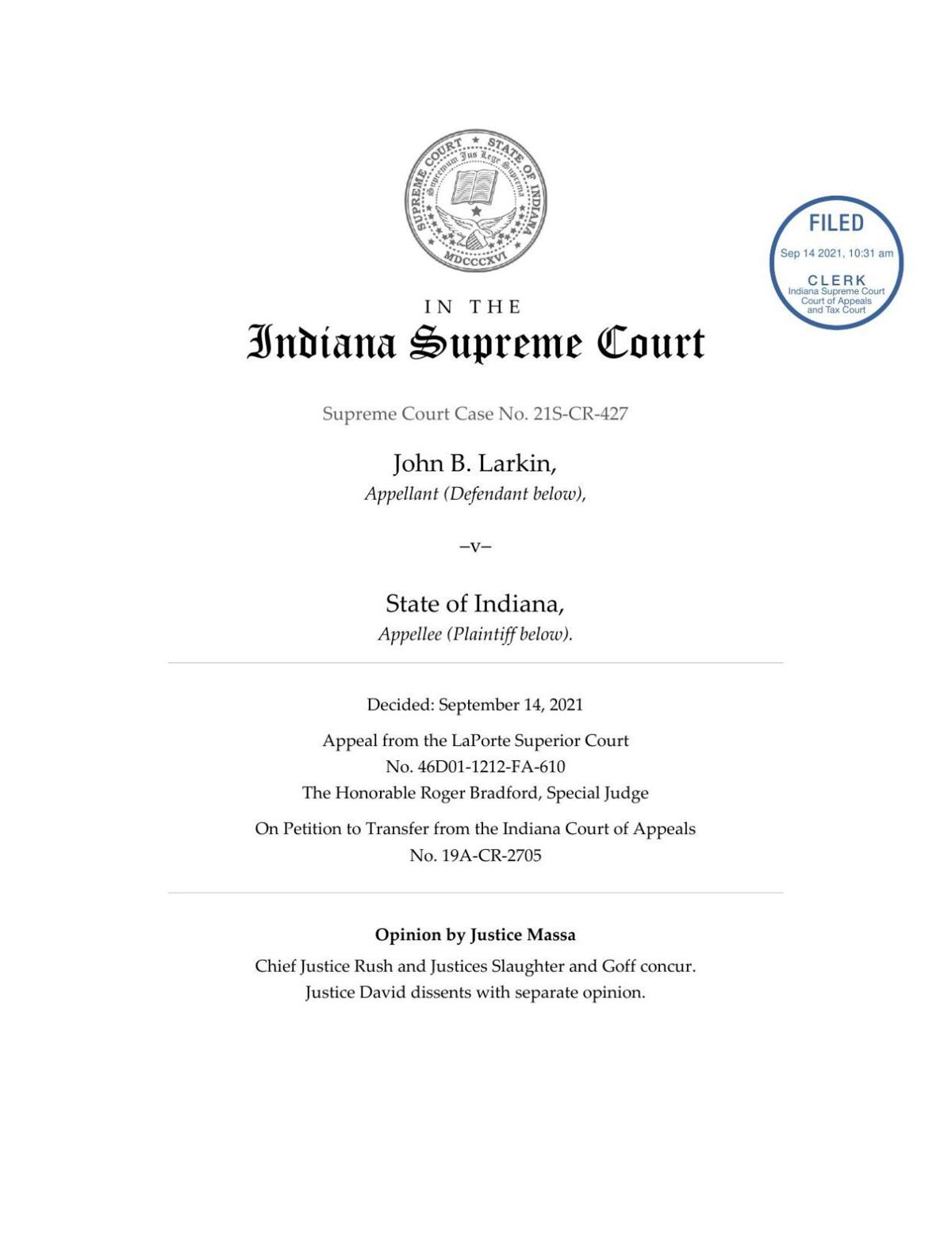 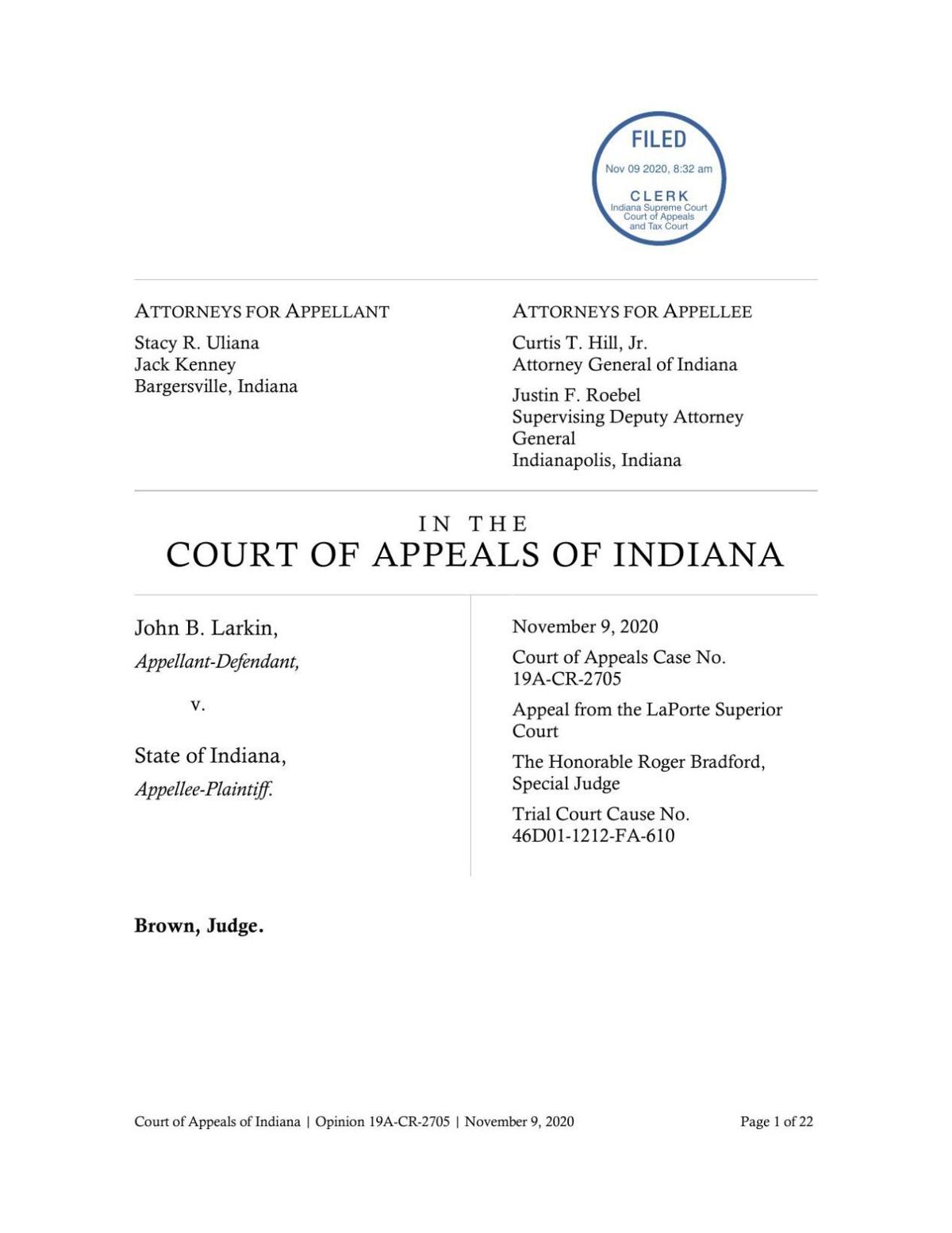 The Indiana Court of Appeals declared John Larkin acquitted of all charges in his wife's death and the court said Larkin is not required to serve his pending two-year prison term.

INDIANAPOLIS — A Long Beach man is charged again with the fatal shooting of his wife in a case that was previously dismissed.

Long Beach man charged in shooting death of his wife

LONG BEACH | A man and his wife from the upscale community of Long Beach were fighting when a gun kept inside the home went off, killing the w…

A pickup truck crashed into a house in Hammond's Hessville neighborhood Monday evening causing damage to the front of the home and flipping the truck on its side.

A Hammond man with two 15-year-olds in his vehicle allegedly led Crown Point police on a drunken, high-speed chase from the Old Courthouse Square into Merrillville early Sunday morning.

Five Northwest Indiana judicial officers recently were recognized by the state's top jurist for their commitment to staying up-to-date on legal practices and procedures through continuing education.

The longest-serving current member of the Indiana Supreme Court will not seek another term and instead retire in Fall 2022 — creating a rare vacancy on the five-member panel.

John Larkin was sentenced to serve two years after being found guilty in 2019 of involuntary manslaughter in the Dec. 11, 2012, shooting death of Stacey Larkin.

Effort to protect Lake Michigan poised to continue — for now

Legislation that could have scuttled a long-planned sewer project intended to keep human waste out of Lake Michigan has been revised by the Senate Utilities Committee.