Elias Costello, 21, pleaded guilty last year to level 1 felony rape, level 2 felony burglary, and level 5 felony intimidation in connection with the July 16, 2018, home invasion that initially was focused on stealing jewelry, money and electronics, until the perpetrators discovered a woman in the home asleep on a couch.

According to court records, Costello appeared to initiate the sexual assault by positioning the woman, slapping her buttocks, groping her, and holding her at gunpoint while encouraging his two accomplices to rape her, which they did.

Costello also threatened to shoot the woman's teenage brother who was hiding in an upstairs bedroom, court records show.

He argued in his appeal for a 20-year prison term, the minimum permitted under the plea agreement, instead of the 60-year maximum sentence authorized by the plea deal.

Specifically, Costello said he only was 18 at the time of the crime and his youth should mitigate his culpability. He also claimed to have various mental illnesses, but records show he presented no evidence of mental illness at trial.

In any case, the appeals court was not persuaded.

The court concluded in a 3-0 decision Costello's 60-year sentence was warranted since Costello was an adult at the time of the crime, his role as apparent leader of the burglary and gang rape, and the fact he was facing a potential 76-year sentence absent a plea deal.

The appeals court also noted Costello had four prior juvenile adjudications, including two that would have been level 4 felonies if committed by an adult, and Costello repeatedly smuggled contraband into the Lake County Jail while awaiting trial in this case.

"Costello has failed to carry his burden of establishing that his sentence is inappropriate in light of the nature of the offenses and his character," the court said.

According to court records, Costello's accomplices, Nathaniel Asbury, 24, of Hammond, and Isiah Barboza, 18, of Hammond, also each were sentenced to 60-year prison terms for rape and burglary.

Their separate appeals are still pending.

A fourth participant, Alexis Lietz, 22, who was Costello's boyfriend at the time and the victim's stepsister, provided the perpetrators a map of the home showing the location of surveillance cameras, safes, jewelry, and other valuables, drove them to the home, and was waiting to drive them away when police arrived, according to court records.

The Antioch, Illinois, woman pleaded guilty to burglary and armed robbery and was ordered to serve a 23-year prison term. She's not currently appealing her sentence, records show. 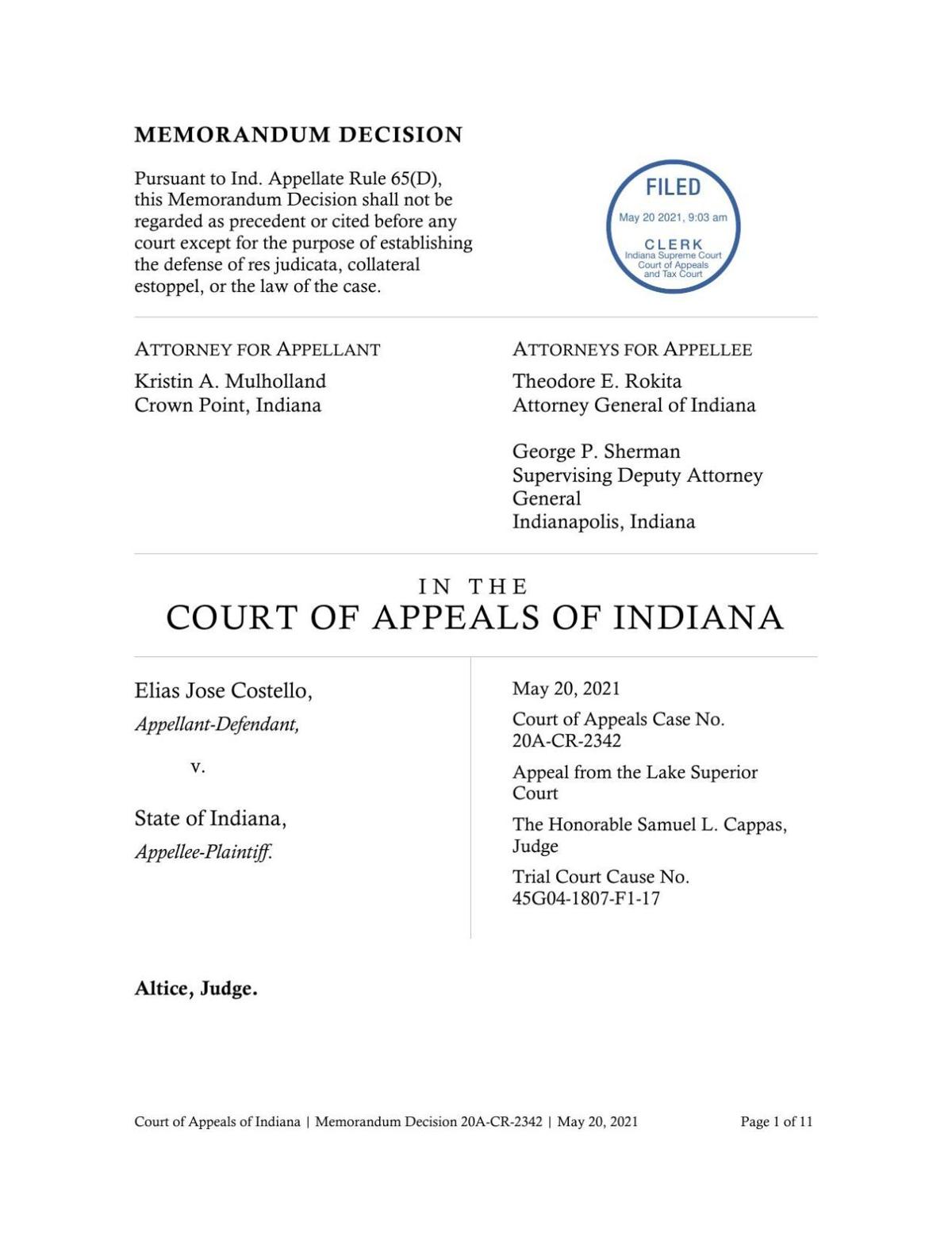 "The level of depravity, the callousness, the sadisticness," Cappas said. "It was horrific."

He faces 20 to 60 years in prison after admitting in a plea agreement he held a shotgun and held down his then-girlfriend's relative as two of his co-defendants raped her during a home invasion.