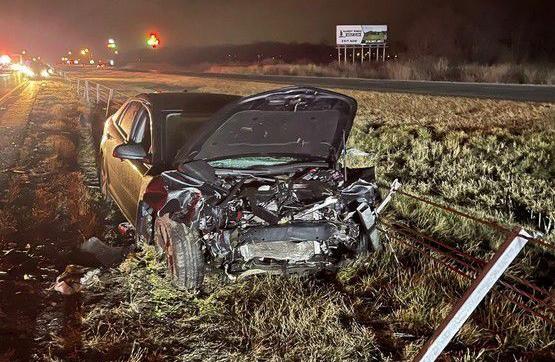 A Chevrolet Impala is destroyed after a fatal crash in Jasper County on Interstate 65. 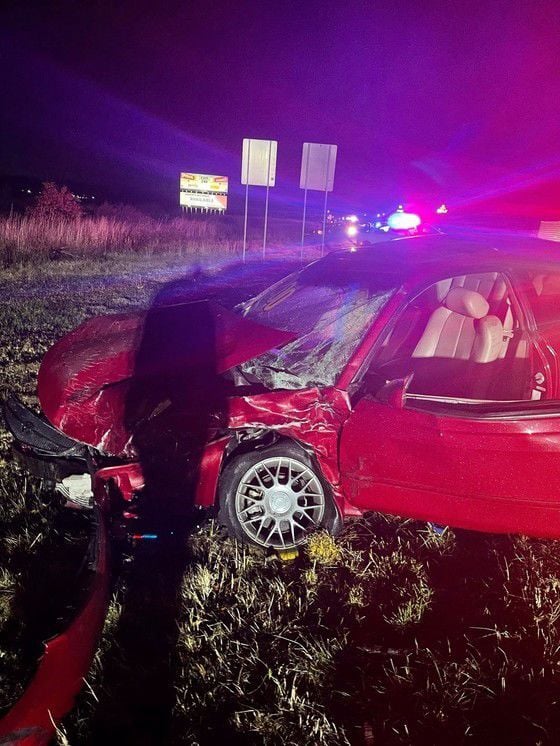 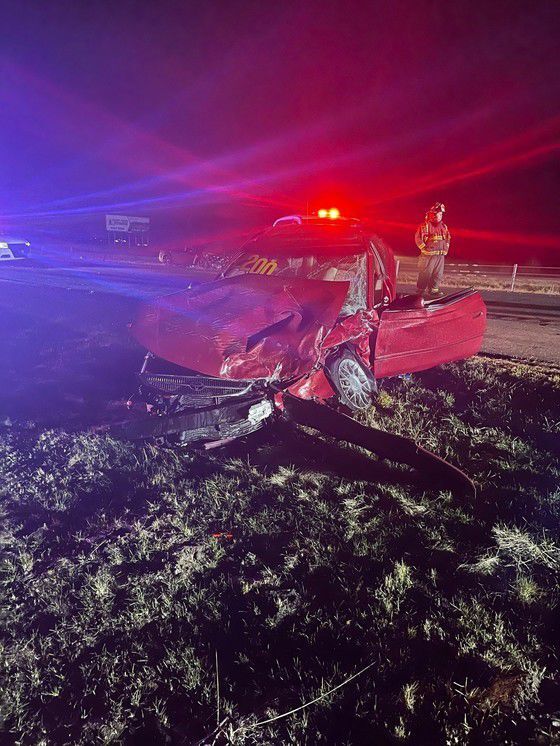 JASPER COUNTY — One person died and another was seriously injured after a crash on Interstate 65 early Saturday evening.

The fatal crash took place near the 229 mile-marker on the interstate at about 5 p.m. Saturday when a Toyota Solara side-swiped a Chevrolet Impala and then rear-ended a GMC pickup, Indiana State Police said.

"The Toyota then spun out of control, striking the cable barrier before traveling back onto the highway where it was struck on the driver's side by a Chevrolet Malibu," Indiana State Police Sgt. Glen Fifield said in a news release. "This impact caused one of the occupants of the Toyota to be ejected."

Timothy D. McHenry, a 25-year-old West Lafayette resident, was pronounced dead at the scene by the Jasper County Coroner's Office after being thrown from the vehicle.

Tyreek A. Brown, a 22-year-old South Holland resident who also was an occupant in the Toyota, was taken to Riverside Hospital in Kankakee and then to Loyola Hospital in Chicago, where he was treated for serious injuries.

Neither Brown nor McHenry were wearing seat belts at the time of the crash, police said.

The Malibu's driver was taken to Franciscan Health hospital in Crown Point to be treated for injuries that were not deemed life-threatening, while the driver of the GMC Sierra was not injured.

The crash closed down the southbound lanes of Interstate 65 for more than three hours to remove all the damaged vehicles and do a crash reconstruction.

"This is an ongoing investigation to determine the cause of the crash as well as which occupant of the Toyota was the driver at the time of the crash," Fifield said.

The Dearborn, Mich.-based automaker, which produces SUV at the Chicago Assembly Plant on the banks of the Calumet River on the far South Side and at the Chicago Stamping Plant in Chicago Heights, is recalling 350,000 vehicles in the U.S. and another 25,200 in Canada.

Two men carjacked a woman at gunpoint at a BP gas station in Munster Thursday evening, and were caught in Hammond later that night after leading police on a chase.

Driver ejected from car, killed in rollover crash on I-65

A driver was killed after being thrown from a vehicle on Interstate 65 Monday.

White Sox fan killed in crash attends game with her family - 'in spirit, one last time'

Lindsey Lagestee, a pharmacist with a doctorate in pharmacy from Midwestern University who sang for the popular country band Dixie Crush, was killed in a car accident in February. Cutouts of Lagastee and her parents Vaughn and Linda Lagestee were seated in Section 101 for the final series at Guaranteed Rate Field this season.

UPDATE: Standoff near school ends after police called out again for man with knives duct-taped to stick

The man refused repeated requests to exit his house, so SWAT officers came through the alley and entered to restrain him and stop him from harming himself.

The driver lost control of the car at The Duke of Oil auto shop at 9615 Indianapolis Blvd., where he and a passenger tried to escape on foot, police said.

"Most people try to quit seven to 10 times before they are successful, but each attempt is a learning experience, not a failure."

One dead, two seriously injured after stolen car flips over on I-65 ramp, police say

One man died and two people were seriously injured after a stolen Maserati crashed on an Interstate 65 off-ramp Monday in Gary.

The driver was trapped inside the van after a three-vehicle crash took place at about 1:30 p.m. Monday, Munster Fire Department Chief Dave Pelc said.

Franciscan Health Fitness Centers Schererville will host a blood drive next week at a time when live-saving blood is in short supply because of the coronavirus pandemic.

Man killed in crash on Borman was standing outside truck, police say

The fatal accident took place at about 1 p.m. Sunday at the 12-mile marker near the border of Lake Station and Gary on Interstate 80/94.

A Chevrolet Impala is destroyed after a fatal crash in Jasper County on Interstate 65.