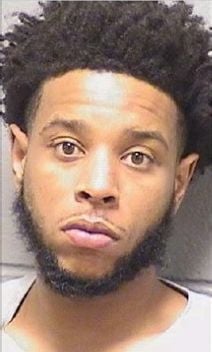 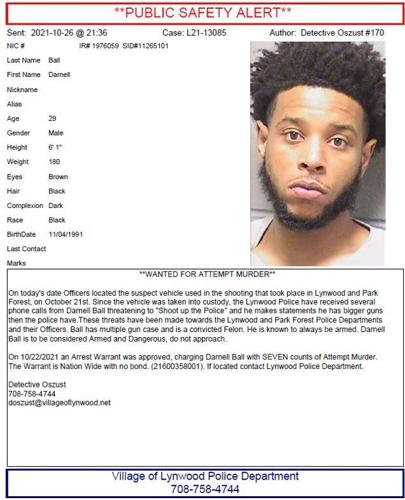 LYNWOOD — Lynwood officials were forced to close Village Hall on Wednesday after a man sought for two area drive-by shootings threatened to shoot at the police station and its officers, Lynwood Police Chief Daniel Dempsey said.

An arrest warrant has been issued for Darnell Ball, 29, on seven counts of attempted murder — two counts in Lynwood and five in Park Forest, the chief said.

Anyone with knowledge of Ball's location is encouraged to contact Lynwood Police Detective Dave Oszust at 708-758-4744 or at doszust@villageoflynwood.net.

A Lynwood woman told police Oct. 20 that Ball had fired several shots into her house in the 20000 block of Oak Lane and then fled the scene.

A man then told police Ball was texting him and threatening to shoot up his Park Forest house, according to police. Park Forest police were contacted, but before they could arrive several shots were fired through the kitchen window at the house.

Ball's vehicle was located Tuesday by the South Suburban Major Crimes Task Force and it was taken to the Lynwood Police Department, Dempsey said. Ball was made aware of this and that he was wanted by Lynwood and Park Forest police.

"Ball then began calling our police department several times threatening to come to the Lynwood Police Department and shoot it up as well as police officers," Dempsey said. "Darnell Ball stated he has bigger guns and was on his way."

Ball had not yet arrived by late Wednesday morning, the chief said. But the Village Hall administrative office, which shares the building with the police department, was closed as a precaution, he said.

Violent felon nabbed after threatening to 'shoot up the police,' cops say

LYNWOOD — Police said they have nabbed a convicted felon with a lengthy violent criminal history, who was wanted on seven counts of attempted …