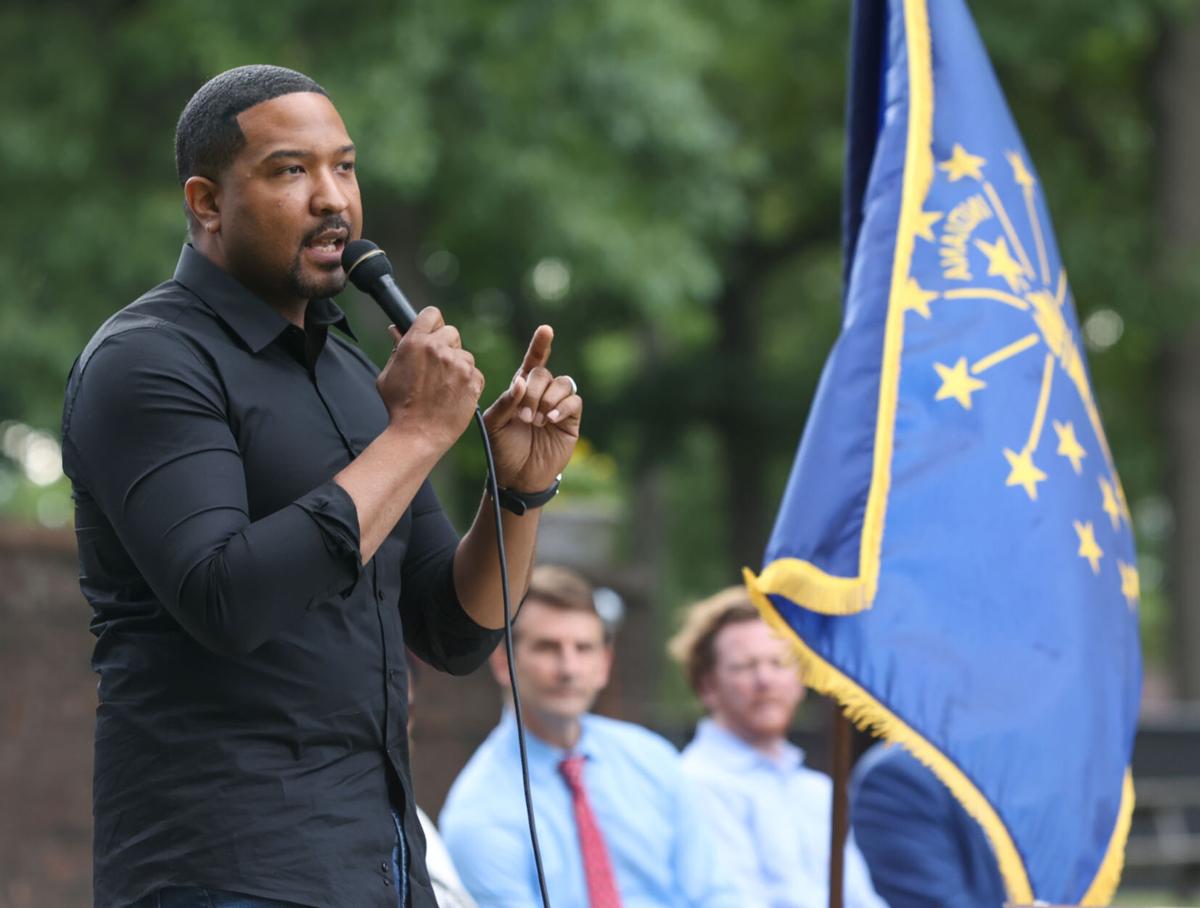 State Sen. Eddie Melton, D-Gary, speaks June 22 at the Wicker Park Social Center in Highland. Melton said Friday following the Kyle Rittenhouse verdict that it's "disheartening but not shocking" to see the criminal justice system consistently fail to hold certain groups and individuals accountable when they commit acts of violence, including a double murder.

Kyle Rittenhouse is comforted by his lawyer after being acquitted of all charges Friday at the Kenosha County Courthouse in Kenosha, Wis.

State Sen. Eddie Melton, D-Gary, is disappointed Kyle Rittenhouse was found not guilty on multiple homicide charges in a Kenosha, Wisconsin, courtroom Friday because Melton is certain that's not how things would have turned out if Rittenhouse was black.

"If a black teen had crossed state lines with a weapon he was not legally allowed to have — to 'protect property' that wasn't his — shot at and hit people, and then approached police while armed, there would not have been a trial," Melton said.

"That teen would have been shot by police in the street," he said.

Melton said following the Rittenhouse verdict it's "disheartening but not shocking" to see the criminal justice system consistently fail to hold certain groups and individuals accountable when they commit acts of violence, including a double murder.

"For Kyle Rittenhouse to face no accountability for a litany of crimes is not justice," Melton said. "This verdict speaks volumes about who we are as a nation and clearly illustrates that we still have a long way to go before we see the justice and equality we deserve in our criminal justice system.

"My prayers go out to Gaige Grosskreutz as well as the families of Joseph Rosenbaum and Anthony Huber who received no justice today."

Lake County Prosecutor Bernard A. Carter had a similar reaction. Carter said he thinks Rittenhouse shouldn't have been carrying a gun amid the Kenosha chaos on Aug. 25, 2020, let alone use it to shoot people over property Rittenhouse didn't even own.

Carter said he believes in the jury system. But he contends the not guilty outcome sends the wrong message to people who might now be encouraged to get involved in similar situations elsewhere.

"I was very disappointed in that verdict," Carter said.

Roy Dominguez, a defense attorney and former Lake County sheriff, likewise declared following the verdict: "This is a sad day for our country when someone can put themselves in harm’s way, declare self defense, and be acquitted."

"The two he killed and the third he wounded will not receive justice. This will encourage more aggressive vigilantism, which is not good for our country," Dominguez said.

On the other hand, Porter County Prosecutor Gary S. Germann said he thinks the Rittenhouse verdict was right given the facts of the case.

"But change a few of those facts around and that young man might be facing a life in prison," Germann said. "I’m not in favor of people going armed to protests, but I respect the Second Amendment right to bear arms and I’m not concerned that anyone in Porter County would ignore gun safety."

LaPorte County Prosecutor John Lake similarly said he believes in the right of people to protest and he hopes people who do so leave their guns at home to avoid escalating those kinds of situations.

"I didn’t watch a lot of the case, so I trust in the jury to come to the right verdict," Lake said. "People on the left think it is an injustice. People on the right don’t. You’d like to think we could have a civil discussion about these issues, but we’ve become a nation of almost tribal politics where people overreact."

Sheriff John T. Boyd of LaPorte County noted that trial spectators don't know everything that occurred in connection with the proceedings and he said people should respect the criminal justice system.

"Sometimes we disagree with a verdict, but that can't be the cause for going out and causing violence," Boyd said.

"Our country gives us certain freedoms and restrictions on the use of firearms. We have to behave responsibly and not try to resolve our dispute with a gun. Guns tend to escalate differences and often someone can get hurt, someone innocent, could get hurt."

Melton said he's considering filing legislation when the Indiana General Assembly convenes in January "to further address some of the pervasive issues in our state's criminal justice system," and Melton will urge his Republican colleagues to support his proposals.

"In our state and country, we must remain active in the fight to combat injustice and inequality in our judicial system," Melton said. "We can and must do better as a nation when it comes to holding guilty parties responsible, especially in cases where lives are lost."

Republican leaders and members serving in the Indiana House and Senate declined to immediately respond to the Rittenhouse verdict, or say whether it may lead to changes in Indiana's self-defense laws.

"The jury made a thoughtful decision after deliberating for three and a half days and listening to the facts and evidence presented," Rokita said. "The rule of law works and liberty is preserved when the people are in charge (in this case a jury of peers) and follow the Constitution."

The Hoosier State provides legal immunity if a person uses reasonable force to protect the person, or a third party, from what the person reasonably believes to be the imminent use of unlawful force, including unlawful actions by law enforcement officers in some circumstances.

Hoosiers also are permitted to use deadly force, and don't have a duty to retreat, if it's reasonably necessary to prevent serious bodily injury to the person or a third party; to terminate an attack on a dwelling, occupied motor vehicle, or other criminal interference with property; or to stop an airplane hijacking.

At the same time, Indiana's self-defense protections do not apply if the person is committing a crime or escaping afterward, or the person provokes unlawful action by another person with intent to cause bodily injury to the other person, among other exclusions.

The first man Kyle Rittenhouse fatally shot on the streets of Kenosha, Wisconsin, was "irrational and crazy," Rittenhouse's attorney told jurors at his murder trial.

KENOSHA, Wis. — Jury deliberations are heading into a fourth day in the Kyle Rittenhouse murder trial.

KENOSHA, Wis. — Jury deliberations in the Kyle Rittenhouse murder trial are stretching into a third day even as his attorneys asked the judge to declare a mistrial Wednesday, saying the defense received an inferior copy of a potentially crucial video from prosecutors.

State Sen. Eddie Melton, D-Gary, speaks June 22 at the Wicker Park Social Center in Highland. Melton said Friday following the Kyle Rittenhouse verdict that it's "disheartening but not shocking" to see the criminal justice system consistently fail to hold certain groups and individuals accountable when they commit acts of violence, including a double murder.

Kyle Rittenhouse is comforted by his lawyer after being acquitted of all charges Friday at the Kenosha County Courthouse in Kenosha, Wis.