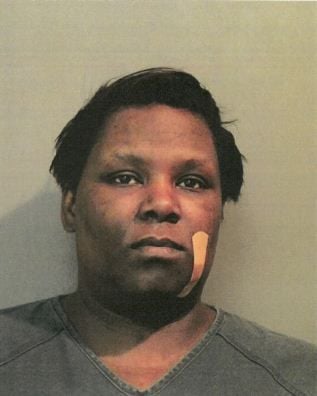 CROWN POINT — A Gary woman stabbed a man in the head and throat Thursday because she thought he was cheating on her, court records allege.

Ebony Edwards, 42, accused the man of cheating while talking to him on the phone and attacked him after he arrived home from work, Lake Criminal Court records say.

The man told police he and Edwards lived together on and off for more than a year, and she wanted their relationship to work out. He did not want the relationship to continue, because she previously "split his head open" and had a temper, according to a probable cause affidavit filed Friday.

The man told police he arrived home in the 4900 block of Maryland Street, changed out of his work clothes and realized Edwards was behind him as he walked downstairs.

Edwards is accused of pushing the man down on a couch and stabbing him. He wrestled one knife away, but Edward stabbed him with a second knife, records say.

As she twisted the knife in his throat, she said, "(N-word), I will kill you," records allege.

One of the man's relatives heard him yelling for help, grabbed Edwards' hand and persuaded her to drop the knife, records say.

The man was taken by ambulance to a local hospital.

Edwards was arrested and charged with aggravated battery, two counts of domestic battery and criminal confinement. 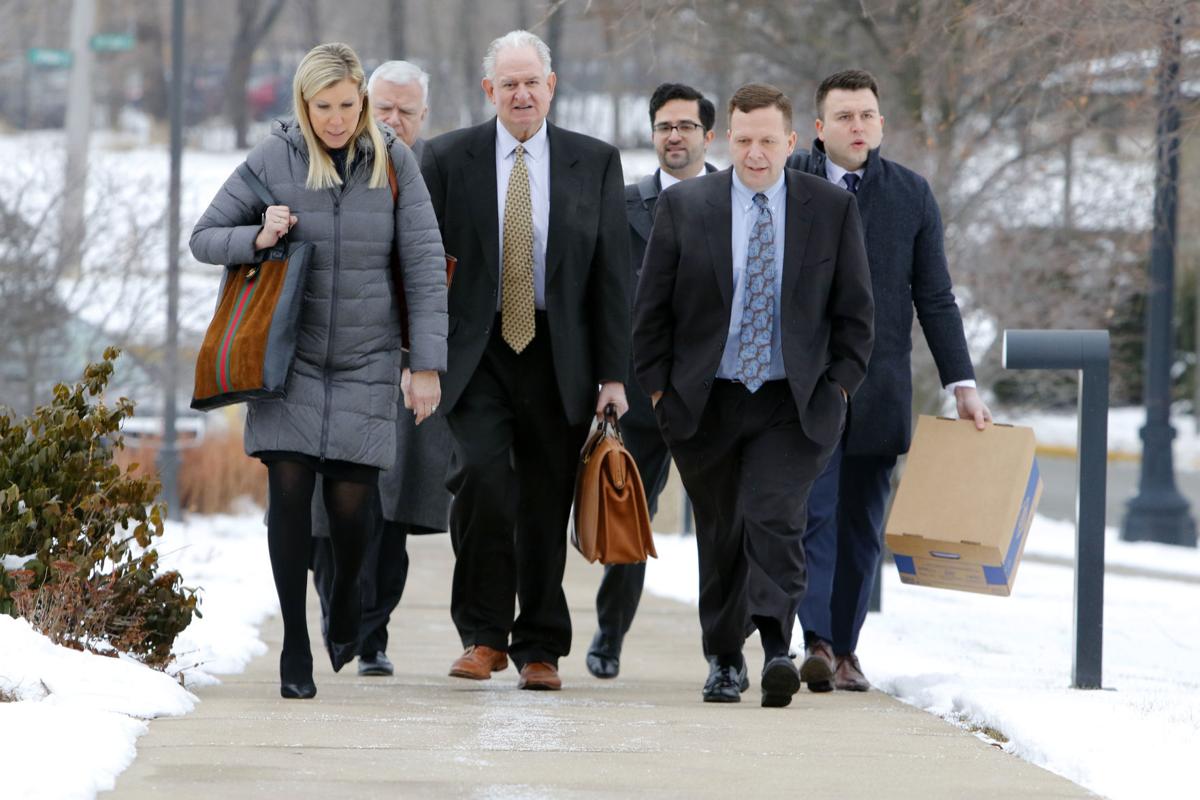 Charnetzky also provided the FBI secret recordings of a meeting between himself, the city's attorney and the point person involved in the development of garbage truck bids which are at the center of one of the three charges Snyder's facing at trial.

The initial tip led to a more than three-year investigation resulting in a November 2016 three-count indictment against Snyder including two counts of bribery and one of tax obstruction.

"Two individuals came in and provided me with information," Field recounted as he told of the beginning of the investigation in September 2013.

Later, in questioning by assistant U.S. Attorney Jill Koster, Field named Charnetzky as one of the two individuals who stepped into the FBI's Merrillville office that day.

Charnetzky had worked as street superintendent for 16 years before he was replaced by then Mayor Olga Velazquez in 2008. Charnetzky had run against Velazquez in the 2007 Democrat mayoral primary. Snyder, a Republican, rehired Charnetzky, who had been a political supporter of Snyder, in 2012. Charnetzky retired from the city in January 2016.

An audio tape, secretly recorded by Charnetzky was conditionally entered into evidence Wednesday. The recording was a conversation primarily between City Attorney Gregg Sobkowski and assistant Street Superintendent Randy Reeder on the development of specifications for new automated trash trucks.

One of the bribery charges against Snyder alleges he took a $13,000 bribe from Stephen and Robert Buha, brothers who owned Great Lakes Peterbilt in Portage at the time. The brothers have since sold the dealership.

Prosecutors allege Reeder, under the direction of Snyder, steered the bids towards Great Lakes Peterbilt. The city purchased five automated trucks from them in 2013 for about $1 million.

Defense attorney Jayna Cacioppo objected to the introduction of the audiotape, saying Koster had not laid sufficient foundation to authenticate the tape.

U.S. District Judge Joseph Van Bokkelen conditionally accepted the tape on the consideration Charnetzky be called to testify at a later date to authenticate the recording.

In the recording, Sobkowski is heard questioning Reeder as to how he developed the specifications for the bids.

Reeder is heard saying various vendors brought trucks to the city to look at.

"We came up with a general idea of what we wanted, and then I approached these two companies and asked they give us the specs," Reeder is heard saying, referring to Great Lakes Peterbilt and McNeilus, a Minnesota-based company that manufactures truck bodies.

"You kinda combine those two together to come up with specs for our garbage trucks?" Sobkowski asked.

Reeder is also heard saying they put a 150-day delivery time frame in the bid because he had asked both companies beforehand if they could make that deadline and they said yes.

Peterbilt received the contract for the three trucks during the first round of bidding in early 2013, but was not the lowest bidder. Their price, $712,882, was some $59,000 higher than the lowest bid received, but were the only ones to meet the 150-day deadline.

Field also testified the Buha brothers made donations to Snyder, between 2012 and 2013, of about $11,000 for Snyder's mayoral ball, golf outing and to help pay for a trip for Snyder and his wife to Austria, Germany and Croatia. At the same time, Field testified, the company was struggling financially and Stephen Buha took $250,000 from his retirement account to keep the company afloat.

Field testified the check to Snyder for consulting fees went to a nonexistent company, SRC Consulting, just one week after Snyder signed a purchase order for the purchase of two more trucks from the company in January 2014. 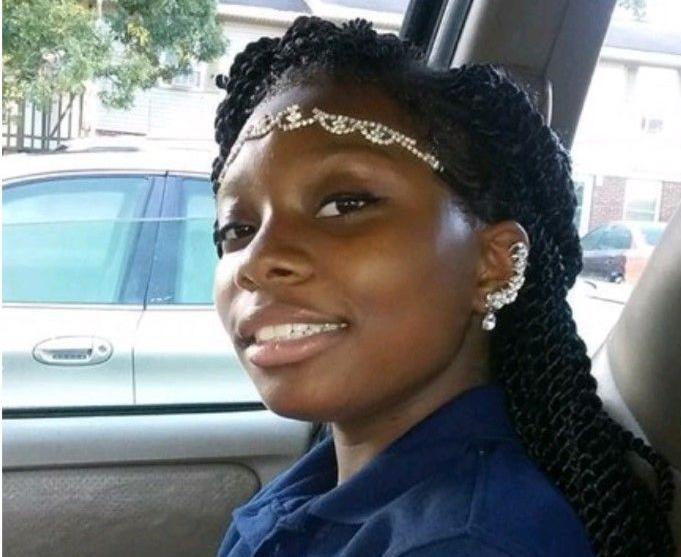 'I broke the tip off': Teen allegedly brags about breaking knife on night of her mother's slaying

CROWN POINT — A teenage girl accused of stabbing her mother to death nearly two years ago pulled a bloody, broken knife from her purse the night of the homicide and told two boys, "I broke the tip off on that (expletive)," court records allege.

Chastinea Reeves, 17, smirked as she made the statement and later laughed as she showed the boys a photo of a woman, who was slumped over and appeared to be deceased, records state.

The allegations against Reeves were outlined as part of a plea agreement Lake County prosecutors reached last month with Matthew Martin, 18, of Merrillville, Reeves' co-defendant and one of the two boys.

Martin and Virgil King, 19, of Gary, were charged in July 2017 with assisting a criminal and auto theft. King pleaded not guilty and has a court hearing set for Feb. 5.

Reeves appeared Tuesday in Lake Criminal Court with her court-appointed attorney John Cantrell, who said he plans to file two motions to suppress evidence in the case.

Reeves was arrested a day after her mother, Jamie M. Garnett, 34, was found stabbed to death Feb. 13, 2017, in the family's home in the 4400 block of West 23rd Place. The homicide sparked a search for Reeves, who disappeared after dropping off her younger sibling at a family member's Gary home.

Reeves was charged with murder in Lake Juvenile Court in February 2017. Lake Criminal Court Judge Thomas Stefaniak Jr. waived her to adult court July 18, 2017, without deciding on a motion to suppress a statement Reeves gave to police.

Cantrell said Tuesday outside the courtroom there are questions about whether detectives had legal permission to interview Reeves.

A man believed to be Reeves' father traveled to Gary from South Carolina and permitted her to be interviewed by detectives, but that man never has been adjudicated as Reeves' father by a court, Cantrell said.

"He had no more right than the Man in the Moon to give police permission to interrogate my client," he said.

Cantrell also plans to file a motion to suppress any evidence obtained from a "fraudulent" Amber Alert police issued after Reeves' disappearance.

Cantrell alleged police considered Reeves a suspect and wrongfully elicited information from those closest to her by using the alert to suggest she was a missing, endangered child.

"Amber Alerts are not an investigative tool to help police attempt to solve cases," he said.

The question regarding use of Amber Alerts never has been litigated in Indiana and could set a precedent, Cantrell said.

Deputy Prosecuting Attorney Maureen Koonce said in court Cantrell has talked about filing motions for some time. The case remains pending, and her office wants to move it along, she said. She asked for a spring trial date.

Even if a judge agrees to throw out Reeves' statement, a jury likely still would get to hear from Martin.

Martin pleaded guilty in December to felony assisting a criminal in connection with Reeves' case and felony battery in a separate case. He faces sentences of one to six years and 0.5 to 2.5 years in prison on each count, to be served consecutively.

He agreed to testify against Reeves and will not be sentenced until her case is closed.

When asked about Martin's plea agreement, Cantrell said, "He is signing something to get himself out of trouble."

According to court records, Martin and King met Reeves at the Oak Knoll Apartments the night Garnett was killed. Reeves allegedly handed King, her boyfriend, the keys to Garnett's 2001 Ford Escape and they drove it away.

Later, Martin noticed what appeared to be blood on Reeves' clothing, records allege. As the three walked along 21st Avenue, Reeves took the knife out of her purse and talked about breaking it, records say.

Martin told police he kicked in a door to an abandoned building in the 2000 block of Delaware Street and tossed the knife inside. Police later recovered the knife, records show.

After Reeves changed out of the bloody clothes, King poured bleach on them, attempted to light them on fire and eventually threw them down a chute in an abandoned building in the 2300 block of Adams Street, records state.

Reeves later showed Martin a photo of a deceased woman before King removed the SIM card from Reeves' phone and destroyed it, records allege.

VALPARAISO — Valparaiso Police are asking the public's assistance in locating a missing female.

CHESTERTON — Police are searching for two suspects after discovering nearly $200,000 in drug…