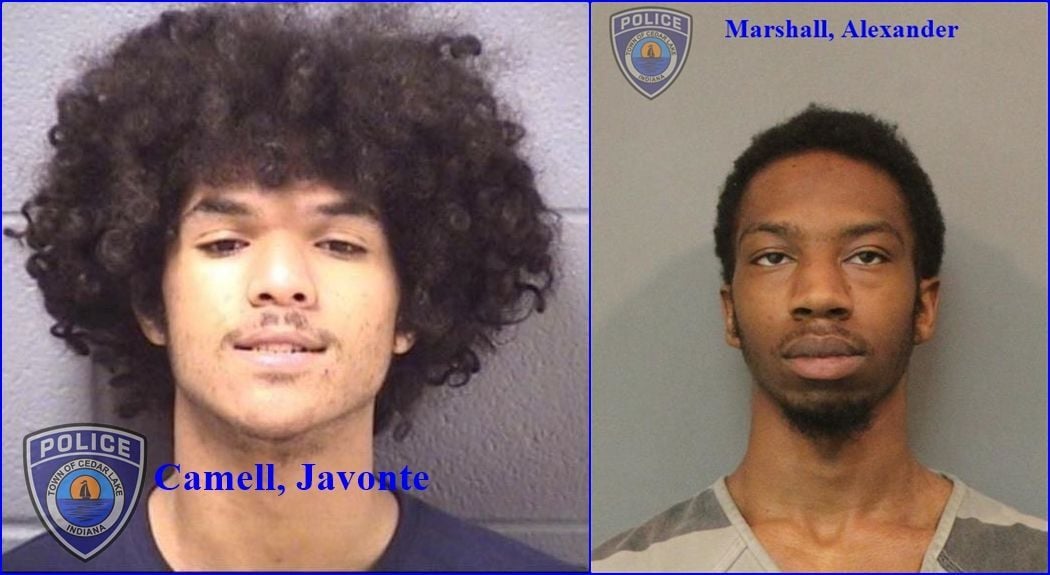 Police are searching for Javonte Camell (left), 20, of Matteson, Illinois, and Alexander Marshall (right), 22, of Gary.

The two suspects fled the scene in a black four-door Sedan.

CEDAR LAKE — Two men who allegedly shot and robbed a man in his Cedar Lake home are considered to be armed and dangerous, police said.

At 1:30 pm. Monday a 20-year-old man was held at gunpoint at his residence in the 1400 block of Wheeler Street in Cedar Lake. Marshall and Camell shot the man in the leg and stole $400 from him, Brittingham said.

The two suspects then fled in a black four-door sedan.

Both men knew the victim and had been at his house previously, police said. The victim is currently recovering in a local hospital.

Both men are considered to be armed and dangerous and anyone with information on their whereabouts is asked to contact the Cedar Lake Police Department at 219-374-5416.

Suspect shoots 3 officers who then shoot him, police say

A carjacking suspect being led into a Chicago police station on Thursday shot three officers, who returned fire and shot him, authorities said.

A Crown Point police officer, at about 1:50 a.m., was at the Speedway when an employee approached him and said he had been robbed about 10 min…

One person was shot, and two were stabbed, in separate incidents over the span of four days, police said.

The small lake has only a couple inches of visibility and floating cage traps have been set up in hopes of catching the reptile.

Drivers who are stopped at a checkpoint in Hammond will experience a brief delay if no violations are found, police said.

Investigators determined the shooting happened in the area of 15th and Clark, police said.

Police are searching for Javonte Camell (left), 20, of Matteson, Illinois, and Alexander Marshall (right), 22, of Gary.

The two suspects fled the scene in a black four-door Sedan.