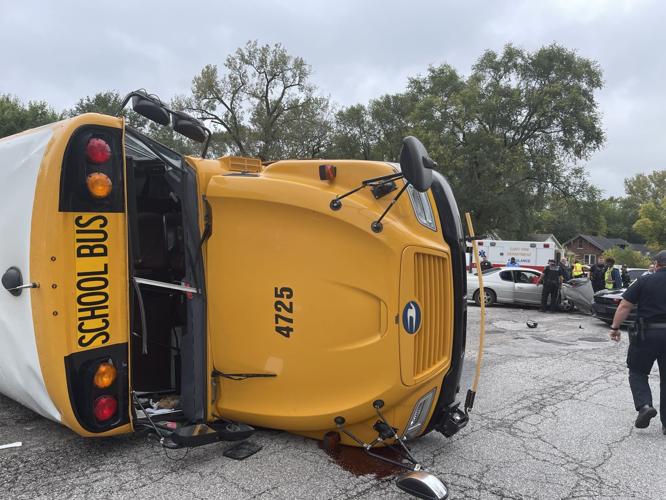 The driver struck a school bus that was traveling south on Burr Street. 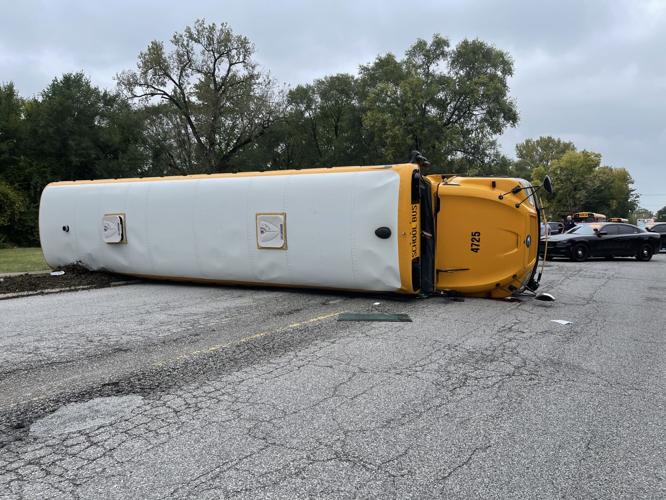 The bus rolled onto its side, however, there were no students inside.

GARY — A wanted man struck a school bus in a rollover crash while trying to flee from officers, police say.

The officer tried to pull the driver over, however the driver refused and led chase north on Clark Road to West Sixth Avenue and through alleyways.

The driver got back onto West Sixth Avenue and after failing to stop at Burr Street, struck a school bus that was traveling south on Burr Street, Martinez said. The bus rolled onto its side, however, there were no students inside.

After an officer removed the bus windshield, the driver and assistant on the bus were helped to safety by good Samaritans, Martinez said. The police report shows the two employees complained of pain but did not indicate any serious injuries.

Four people inside the suspect's vehicle were arrested and taken to a local hospital for treatment.

The driver who led the pursuit is an 18-year-old man from Gary, who is wanted on two warrants. Police said his previous charges include robbery with bodily injury and domestic violence. His identity has not yet been released.

Police recovered a loaded handgun that was inside the vehicle.

Coroner identifies 2 killed in wrong-way crash on I-65

The crash occurred about noon Saturday after a driver fled a minor traffic crash at a gas station and entered I-65 going the wrong way, officials said.

"His whole back is road rash," the Portage mother said.

Sheriff Oscar Martinez Jr. is asking a judge to declare unconstitutional a portion of a new Indiana statute barring individuals under indictment from carrying a handgun in public.

Dushawna Glover, 48, of Merrillville, disappeared in May 2020.

Anyone with information about the crash is encouraged to contact Cpl. Richard Pennington at 219-374-5416.

Porter County police say they vehicle being sought will have damage on the front passenger side.

The department released two surveillance photos in the hopes the public can identify the person.

Police were dispatched to a residence in the 7700 block of Forest Avenue in Gary for a death investigation, records showed.

The verdict in favor of James Hill Jr. marks the second time a federal jury has found against retired Hammond police Capt. Michael Solan since 2006.

The driver struck a school bus that was traveling south on Burr Street.

The bus rolled onto its side, however, there were no students inside.