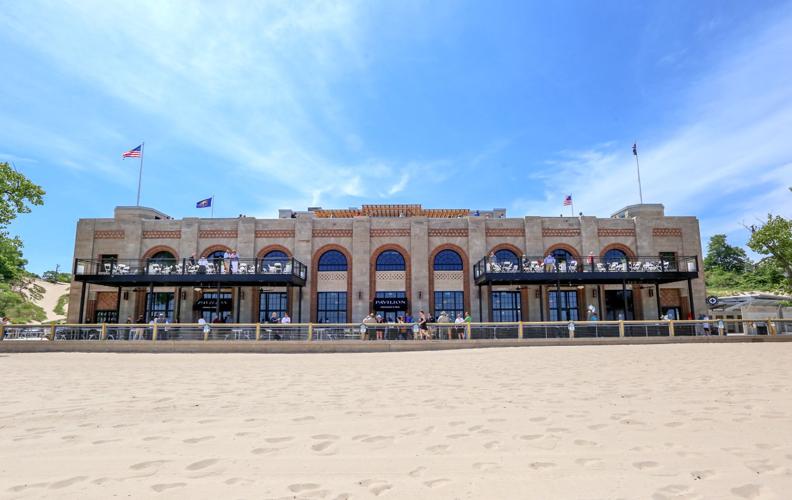 Law enforcement say a potentially large group of reproduction rights protesters will be given access with limitations Thursday evening to the Indiana Dune State Park during a fundraiser for Sen. Todd Young, R-Ind. 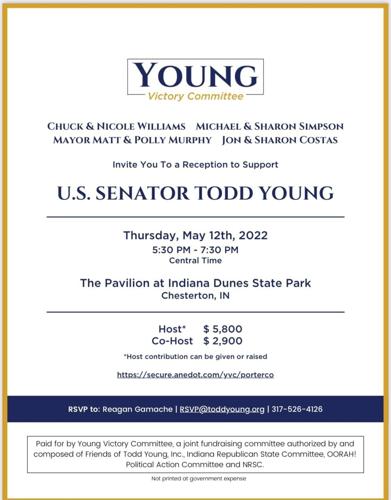 CHESTERTON — Law enforcement say a potentially large group of reproduction rights protesters will be given access with limitations Thursday evening to the Indiana Dune State Park during a fundraiser for Sen. Todd Young, R-Ind.

"An area has been selected in the vicinity of the pavilion where guests will be able to safely exercise their First Amendment rights," said James Brindle, director of the division of communications at the Indiana Department of Natural Resources.

"We ask that all parties respectfully share the park with their fellow visitors," he said.

Anyone entering the lakefront park is required to pay the standard entry fee of $7 per Indiana licensed vehicle and $12 for out-of-state plates, or show an annual state park pass, Brindle said.

Thursday's 5 p.m. protest is organized by Northwest Indiana National Organization for Women and the associated CommUNITY for Repro Justice, according to local and state President Julie Storbeck.

"His voting record reveals a clear contempt for gender equality and the right to body autonomy, equal protections, and privacy for those who are not cis-gender, straight, white men and/or who conform to his harsh and narrow world view," she said of Young.

"These laws that hinder or deny access to reproductive health care, including birth control and abortions, disproportionately harm black, indigenous and other people of color, those with low incomes, immigrants, young people, people with disabilities, and the LGBTQIA+ community, who already face barriers to accessing health care," Storbeck said.

"Nowhere else can a person's body be used for some purpose against their will or without their consent," she said. "A person's organs cannot be harvested after their death. They cannot be forced to donate blood, have sex, enter into a contractual agreement, or labor against their will. But they can be forced to supply a 'domestic supply of infants' for adoption. That is horrifying. That is why we protest."

The fundraiser, which boasts a host fee of $5,800 and co-host at $2,900, is being sponsored by Valparaiso Mayor Matt Murphy, former Valparaiso Mayor Jon Costas, Porter County Republican Party Chairman Mike Simpson and Indiana GOP Treasurer and Valparaiso resident Chuck Williams, who was involved in the recent disputed restoration and operation of the pavilion.

A spokesperson for Young did not immediately respond Thursday morning to a request for comment, but a press release from earlier this week quotes the senator's opposition to legislation that he described as proposing to block states from "protecting the unborn and enshrine late-term abortion into federal law."

"Despite what these advances in modern science tell us, the current abortion policy in the United States is more in line with China and North Korea," he reportedly said. "We are one of only seven countries around the world that allow abortion to take place past the point at which a baby can feel pain in the womb."

Democrat Hammond Mayor Thomas McDermott Jr., who is seeking this year to unseat Young, said Thursday morning the planned protest shows how fed up the public is with the senator.

"Todd Young is more concerned about enlarging his campaign war chest than he is about Hoosiers civil liberties and rights," McDermott said.

He continued that, "3.3 million Hoosier women are going to lose their right to make a choice about their health and bodies when Roe v Wade is overturned and Todd Young will continue to ignore them."

With the humidity dropping, Thursday and Friday are looking very warm, but quite nice. When will rain return to the Region? Find out in our la…

"The date and time that the crash occurred is unknown at this time," state police said.

Law enforcement say a potentially large group of reproduction rights protesters will be given access with limitations Thursday evening to the Indiana Dune State Park during a fundraiser for Sen. Todd Young, R-Ind.