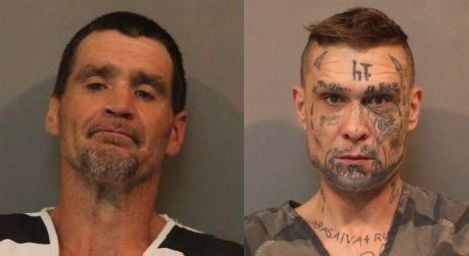 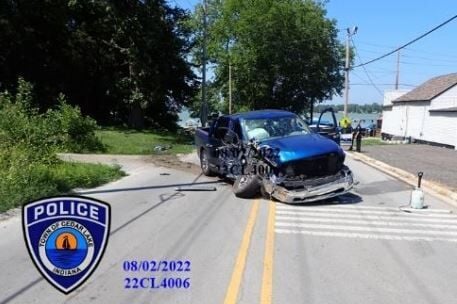 Police said they responded at 2:12 p.m. Tuesday to a report of a crash on the curve of South Lake Shore Drive and Cline Avenue.

They determined a 2009 RAM pickup truck driven by William Howard had been traveling recklessly when it left the roadway and struck a utility pole leaving it disabled in the middle of the roadway.

Howard and passenger Brian Watson, 38, of Cedar Lake, fled the scene on foot, leaving a 37-year-old female front seat passenger behind with severe injuries and a bleeding arm, Brittingham said. The Cedar Lake woman was treated for her injuries.

Howard was later nabbed after a brief struggle with officers, and it was determined he had been drinking alcohol, police said.

"An open bottle of an alcoholic beverage was also located on the driver's side floor of the vehicle," Brittingham said.

Howard was taken to the Lake County Jail and faces felony counts of leaving the scene of an accident with serious injury, resisting law enforcement and operating a vehicle while intoxicated with serious bodily injury.

Watson, who refused to stop when ordered, was also taken into custody following a brief struggle with officers, police said.

He faces a charge of resisting law enforcement and it was discovered he has an active warrant out of Porter County, Brittingham said.

"The SUV appeared to collide with something that was walking in the southbound lanes," a charging document reads.

Valpo man charged after found slumped over in vehicle with syringe in hand, Portage police say

Police said they attempted to use the drug Naloxone to revive the Valparaiso man, which neutralizes the effects of heroin and other opioids.

Teddia “Teddy” Caldwell formally pleaded guilty to two of 20 felony counts he faces — conspiracy to possess with intent to distribute cocaine between 2016 and 2018 and ordering a fatal 2017 robbery.

While officers were en route, the woman told dispatchers the man had broken out a window and she discharged her firearm but was unsure if she shot him, police said.

The man previously was arrested in Porter County in September 2018 after leading a sheriff's officer on a pursuit in a maroon 1993 Chevrolet Camaro, court records show.

"When asked about the concealed items by a store employee, the females fled the store, making no attempts to pay for the concealed merchandise," according to police.

The defendants are accused of fatally shooting Tyrae D. Hayes, 25, of Gary, who arrived at the Citgo gas station in the 900 block of East Fifth Avenue on July 31 as they were leaving in a gray Hyundai.

The driver said she was not injured, but the officer reported finding her impaired and smelling of alcohol.

The Subaru had rapidly reduced speed to merge on to the toll road ramp when the collision occurred, Indiana State Police Sgt. Glen Fifield said.

Region woman says she was sexually assaulted at home by stranger, police say

Police were notified of the incident shortly before 7:30 a.m. Wednesday.