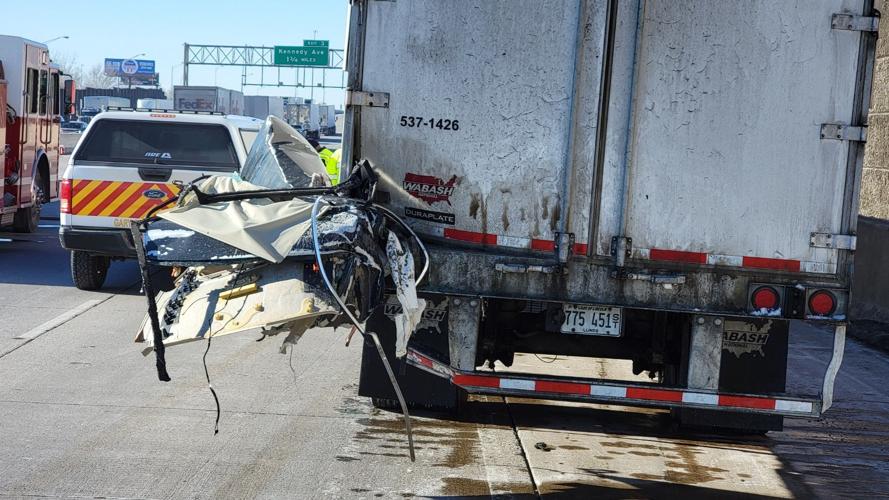 Damage to the back of a semitrailer can be seen Friday after a pursuit and crash on Interstate 80/94 in Gary that resulted in the deaths of a 20-year-old Matteson, Illinois, woman and an infant.

Police respond Friday to a pursuit and fatal crash on Interstate 94 near Cline Avenue.

GARY — A infant and 20-year-old woman were killed Friday after the driver of a car in which they were riding fled from Lake County sheriff's police and crashed on Interstate 80/94, Sheriff Oscar Martinez Jr. said.

The driver, Eric White, 20, is currently in Lake County Jail after being released from the hospital and criminal charges are pending against him. White's last known addresses include Gary and Calumet City.

Martinez said White had been arrested in connection with a pursuit in November.

White was taken to a local hospital with head injuries after officers began chasing him about 11:30 a.m. and he crashed on westbound I-80/94, between the Burr Street and Cline Avenue exits, police said.

After receiving medical treatment, White was expected to be arrested on suspicion of illegal possession of a firearm and other charges, Martinez said.

"Any loss of life in such horrifying circumstances is tragic, but the loss of a child is especially disturbing," Martinez said. "Our thoughts and prayers are with the families of those who lost their lives."

Sheriff's police attempted to stop a driver in a black 2010 Audi A5 for speeding and disregarding a traffic signal near 25th Avenue and Broadway in Gary, according to Martinez and Indiana State Police.

The driver sped off south on Broadway and got on westbound I-94, according to a news release.

The officers briefly lost sight of the car before discovering the crash at the Colfax Street bridge, he said.

The 20-year-old Matteson, Illinois, woman riding with the driver was killed instantly when he rear-ended a semitrailer, Martinez said. An infant, who was in a car seat, also was pronounced dead at the scene, he said.

Neither of the crash victims have been identified by officials as of Friday night.

Indiana State Police assisted with a crash reconstruction investigation and determined the driver of the Audi lost control and rear-ended a semitrailer in the right lane, Sgt. Glen Fifield said.

"After striking the trailer, the Audi spun across all lanes and drove into the median wall," Fifield said. "After hitting the wall, the Audi then continued back across the lanes in front of the same semi that it had rear-ended and was struck on the passenger side by the front of the semi."

The Audi came to rest wedged under the front bumper of the semi, he said.

The woman suffered fatal injuries during the initial impact with the trailer and was ejected, Fifield said.

"A small child who was in a car seat on the rear passenger side of the Audi also suffered fatal injuries," he said.

Martinez said the crash scene likely was traumatic for emergency crews who responded.

"Police officers are faced with tragedy daily, but considering the circumstances with this incident, we are offering to help officers cope,” the sheriff said.

After the crash, police learned the driver previously had been arrested in connection with a pursuit, he said.

Traffic delays on the Borman Expressway lasted for about four hours.

Medics responded around 7 p.m. Monday to a report of a pedestrian hit by a tow truck.

Evaluation process on how to safely house former cop behind bars same as any inmate, officials say

Curtis Jones, who faces three to 16 years behind bars on each of the neglect convictions, is being held at the county jail without bond until his sentencing May 31.

Autopsy and toxicology reports are pending.

State police said they were searching for a suspect vehicle in a theft when Porter police received word of the carjacking.

Damage to the back of a semitrailer can be seen Friday after a pursuit and crash on Interstate 80/94 in Gary that resulted in the deaths of a 20-year-old Matteson, Illinois, woman and an infant.

Police respond Friday to a pursuit and fatal crash on Interstate 94 near Cline Avenue. 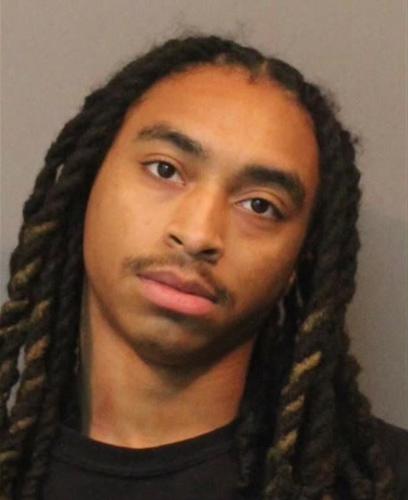