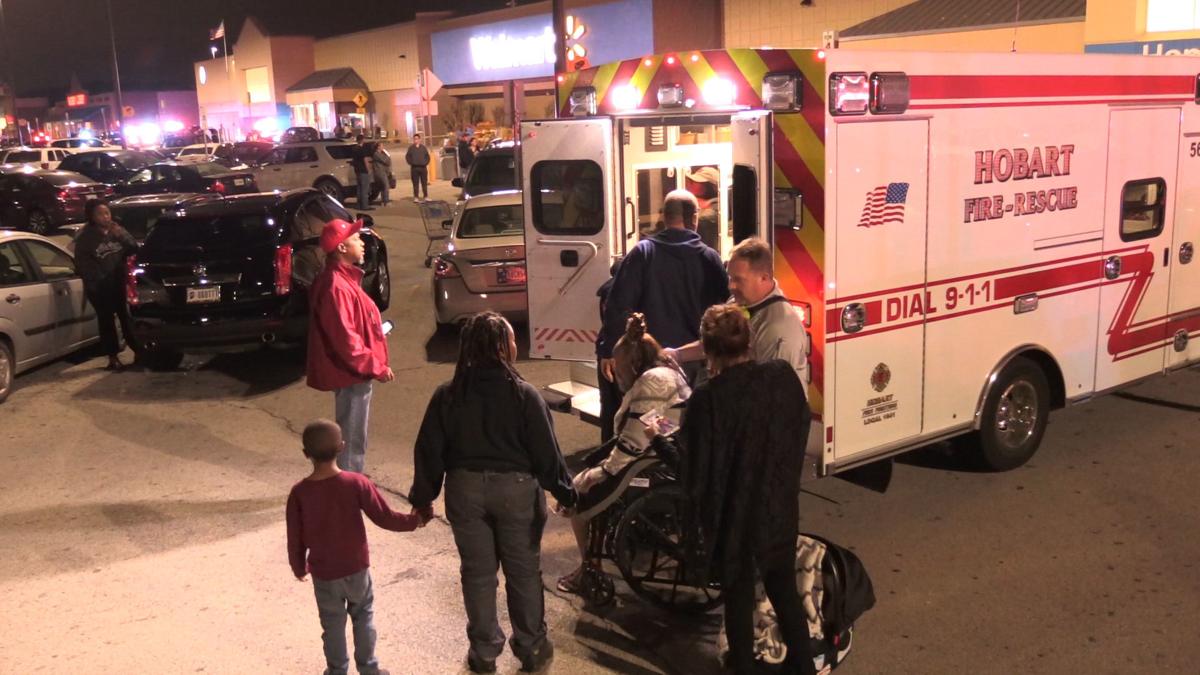 Police investigate a shooting Sunday night at the Walmart in Hobart. A 25-year-old Gary man and his 9-year-old shot were wounded in the shooting. 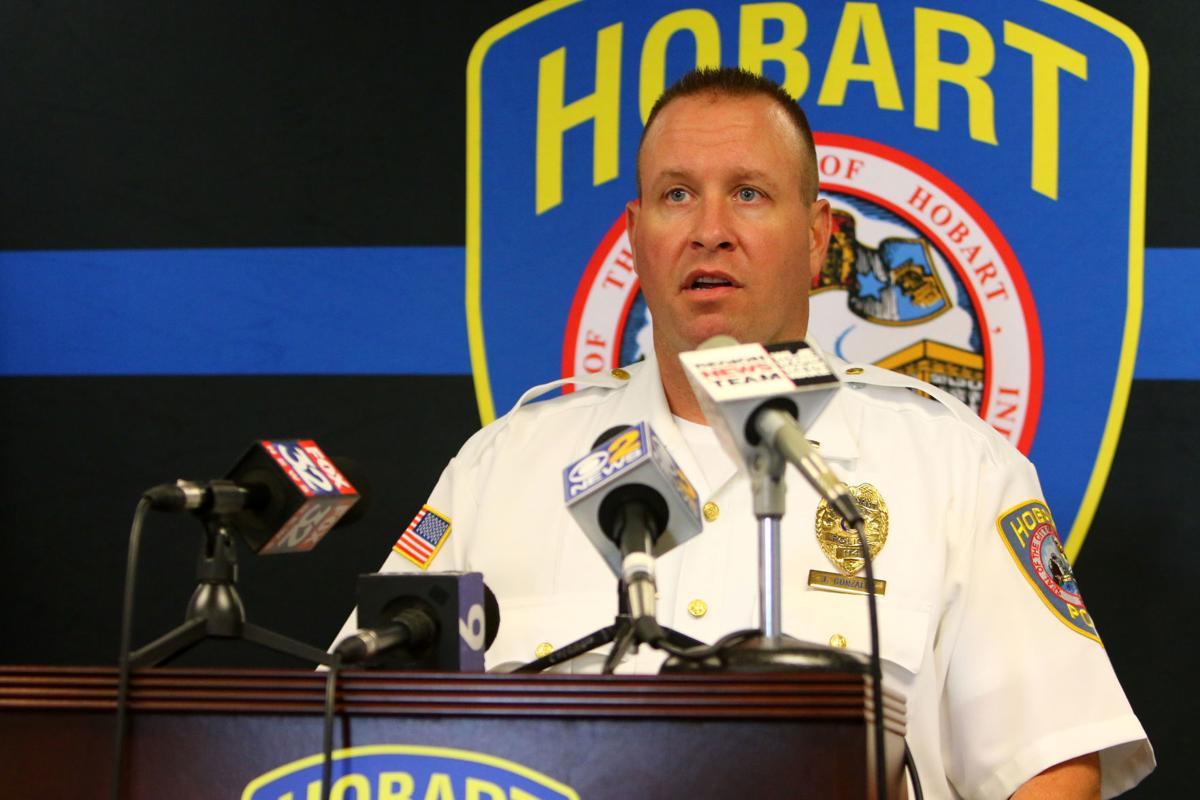 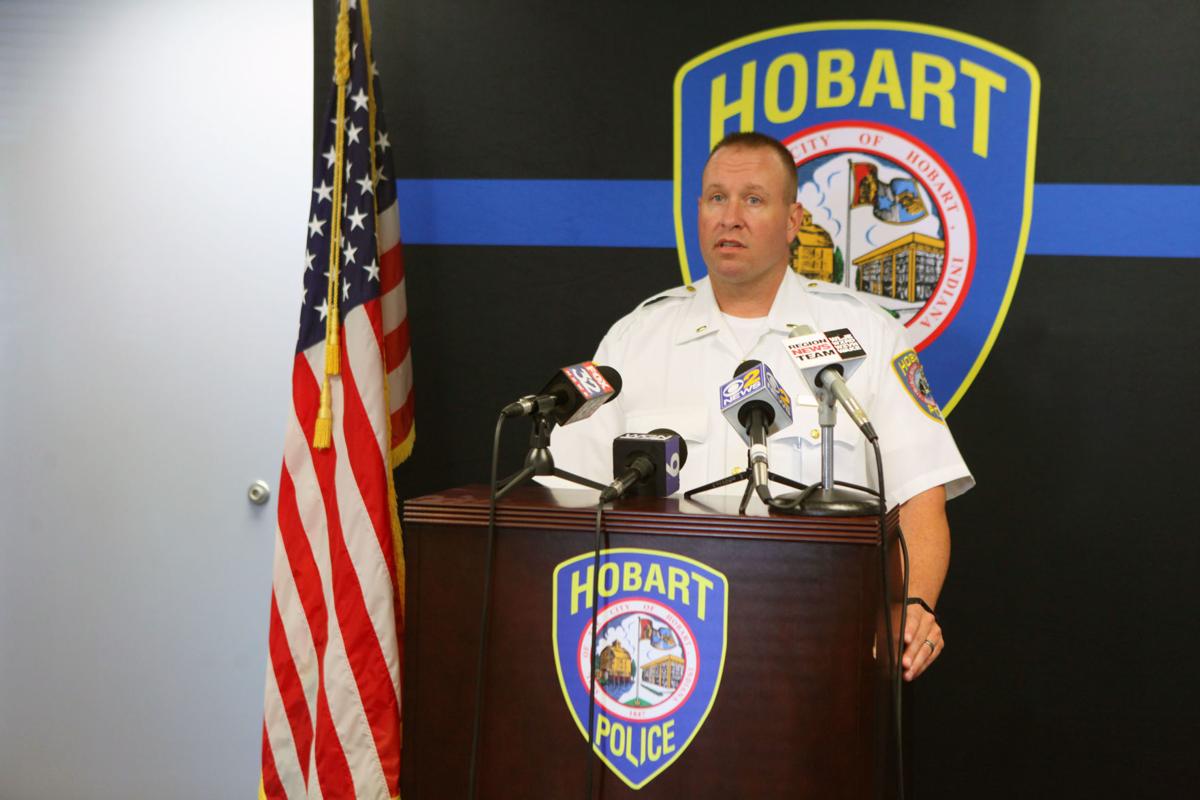 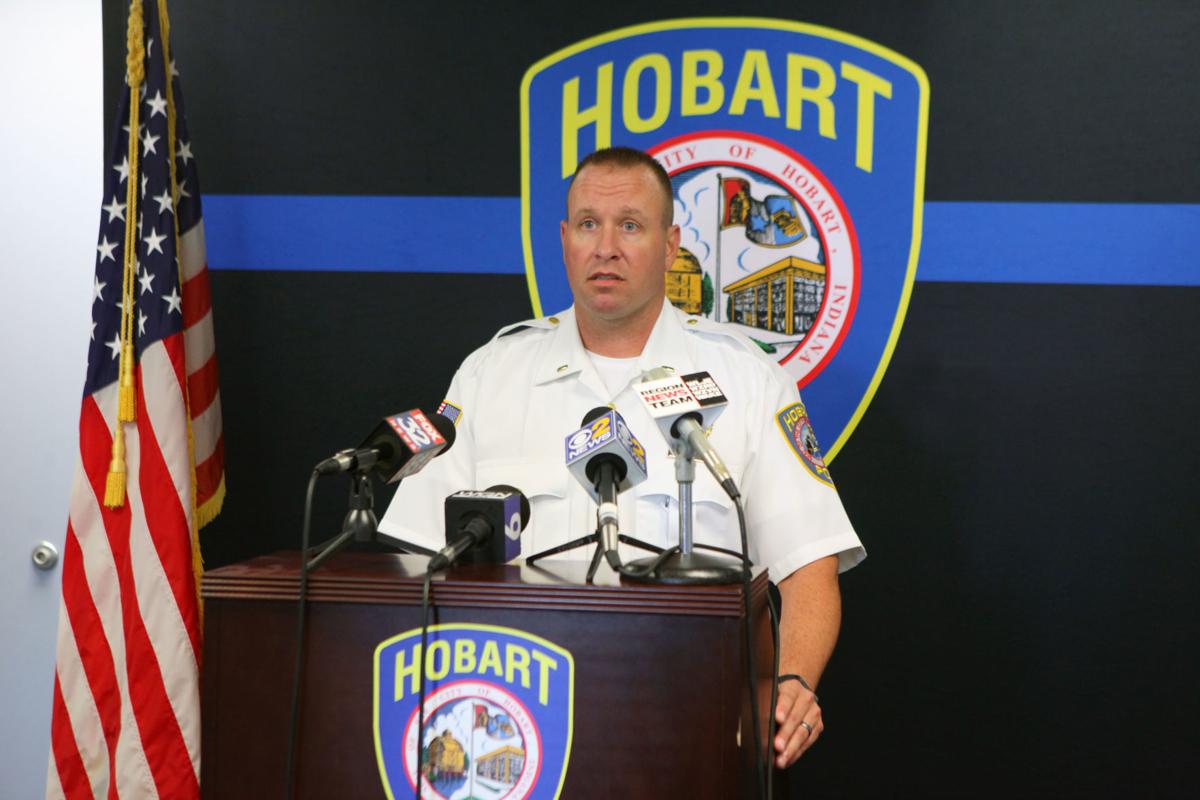 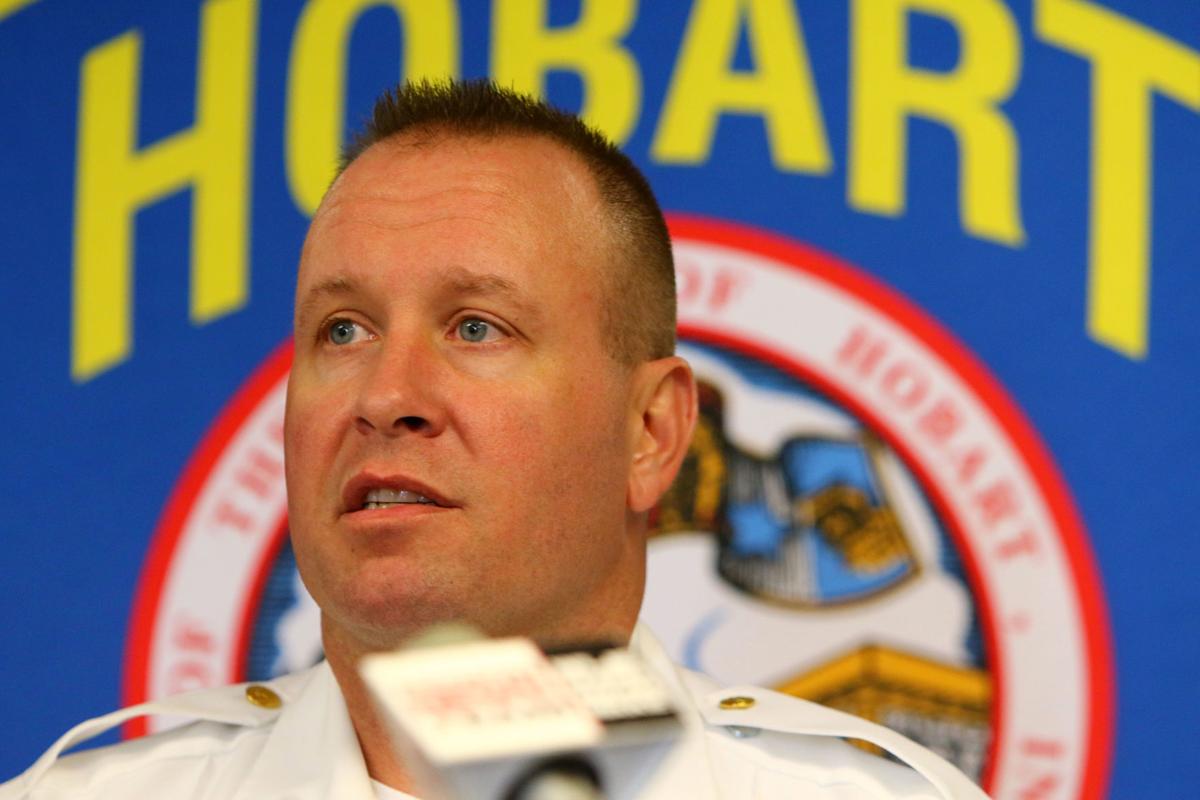 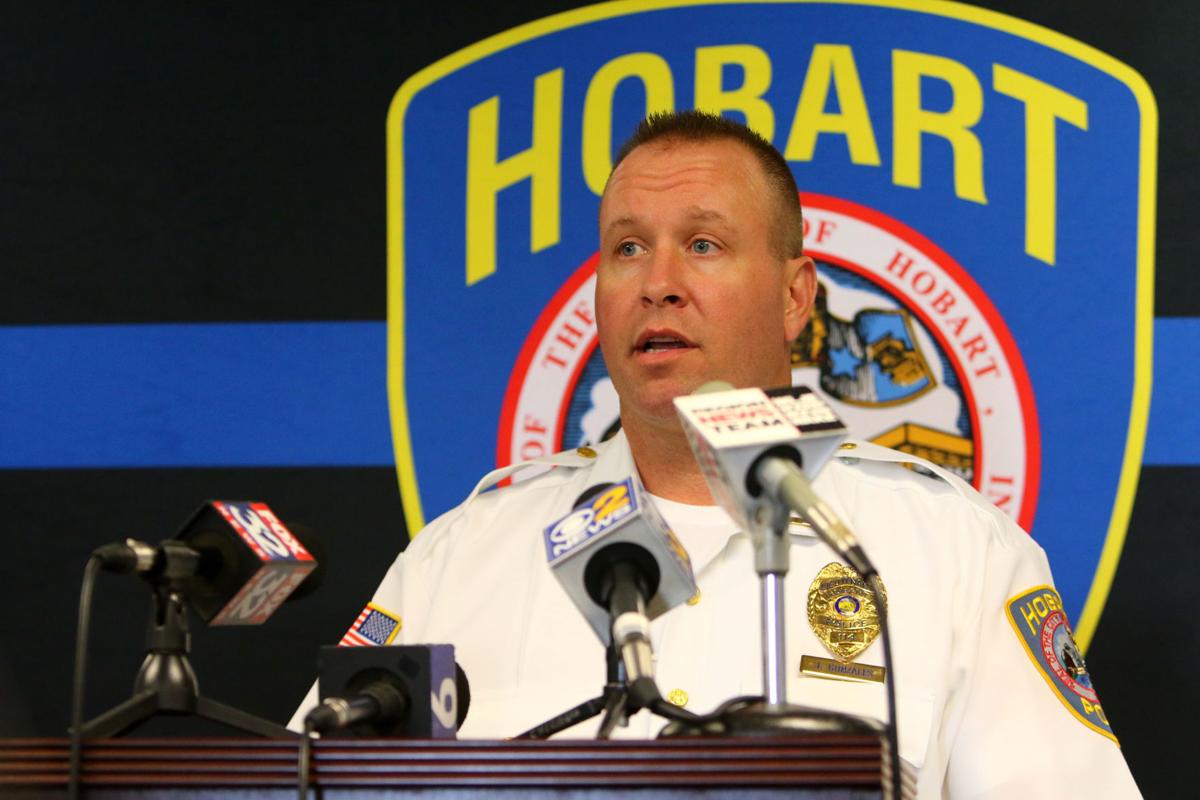 An explosion of gunfire sent scores of Walmart shoppers into panic, left a child critically injured and pressed an off-duty Gary officer, at the store with his family, into action.

Now police are on the hunt for a Gary man believed to have instigated the gang-related shootout inside one of the Region's busiest retail stores.

“With his actions, yes I would consider him armed and dangerous,” Hobart Police Lt. James Gonzales said of Hughes.

A 9-year-old boy, one of two victims in the shooting, remained in critical condition Tuesday with gunshot wounds to his chest and leg.

Gary officer Keon Parker was with his family in a checkout lane when he heard multiple shots fired near the exit, court records filed Tuesday in Lake Criminal Court state. Parker told his family to hide under a cash register and went to the exit.

Nearby, he found the shattered glass window of a Burger King restaurant located within the Walmart and an injured man, the father of the 9-year-old victim, crawling away from the exit.

Parker told the man to hide behind a cash register. The officer then ushered his own family into the safety of a storage closet in the store and told his wife to call police.

The off-duty officer returned to the scene to find a bloody trail from Burger King to a clothing area where he found the 25-year-old adult shooting victim who had been wounded in the leg.

Parker began tending to the wounded man’s leg, but not before disarming one of the victim’s friends of a semi-automatic pistol, which police believe was used to return gunfire in a shootout outside the store.

The officer secured the gun by hiding it near some chicken near the checkout aisles before tending to the victim.

Police say they later learned the adult victim, three friends and the victim’s 9-year-old son were walking out of the store into the parking lot when a man in a dark hoodie approached them with a gun in his hand.

The group was previously at a child's birthday party and had arrived at Walmart to purchase liquor, police said.

The victim's girlfriend, who also was present, said she heard the shooter say, “Oh, so you want to start something here” before drawing his gun, court records state.

It was then that the man in the hoodie started firing at the group. The woman grabbed the young boy to shield him, but the child was hit and fell to the ground, tearing her shirt as he fell.

She laid on top of the boy as shots were fired, she told police. As the shooter walked by her, she heard him say, “You're lucky I don't shoot you [expletive.]”

One of the adult victim’s friends drew his weapon and fired six or seven shots in the direction of the shooter before turning to run, according to court records.

Later, police would determine a total of 26 rounds were fired, Gonzales said.

Another witness, the 25-year-old man's brother, said the group encountered the shooter with a woman in Walmart before the skirmish. He said the shooter was “mean mugging” his brother, but no words were exchanged.

Officers said they saw a savage scene upon reviewing the Walmart surveillance tapes, with the gunman pursuing the injured man, who could no longer walk.

“The victim is shown crawling on the ground at the entrance to Walmart, and Mr. Hughes on foot,” Gonzales said.

Responding to the scene, a Hobart officer found the 9-year-old boy, who was bleeding from his chest and abdomen area, Gonzales said. The officer bear-hugged the juvenile, putting pressure on the gunshot wounds in an attempt to stop the bleeding.

“He picked him up, and began to run to the ambulance because the ambulance couldn't get to the area because of the crowds of people,” Gonzales said. “While he was running to the ambulance, another officer assisted him and carried him, while the original officer applied pressure to his wounds. They were able to get him to the ambulance for treatment.”

The 9-year-old boy was shot in the chest and leg, and his father, 25, was shot in both of his legs, back and stomach, police said.

“I'd like the 9-year-old victim's family to know they are in our prayers and thoughts daily, and we pray for his full recovery,” Gonzales said. “We have been in touch with the hospital where the 9-year-old victim is being treated, and they relayed to us he is still in critical condition.”

Gonzales said police arrived within a minute of the 911 call and witnessed scores of people in Walmart.

“Within three minutes, they had a team of officers starting the response to an active shooter situation,” Gonzales said.

Customers were finding any way they could to hide, according to police at the scene.

“While the officers were inside conducting a sweep of the building, they encountered dozens of patrons who had taken cover in various portions of the store,” Gonzales said. “Just to show you how scared some of the patrons were, the officer described to me that a couple of the patrons retreated to the area where pillows were located and actually climbed onto the shelf and covered themselves with pillows.”

Police later identified the alleged shooter and the 25-year-old man as belonging to two rival gangs in Gary's Glen Park neighborhood. The man who fired back at the shooter was also identified as a gang member.

Gonzales said police found that the shooter and the 25-year-old shooting victim had an altercation six weeks prior, and the victim was shot during the fight in Gary.

Police tracked the transaction to find the woman's identity, who had photos of her and the shooter on her Facebook profile.

“This senseless shooting was the result of an ongoing gang dispute between two gang factions in Gary,” Gonzales said. “Mr. Hughes isn't in custody as of yet, but law enforcement agencies are still actively searching for him. It is in Mr. Hughes's best interest to turn himself in to local, county or state law enforcement.”

Gonzales said the investigation is ongoing and anyone with information can contact Sgt. Nick Wardrip by email at nwardrip@cityofhobart.org or by phone at 219-942-4900.

“We were only able to recover one weapon from the scene, so I think it'd be safely assumed that this individual may still be armed," Gonzales said of Hughes.

Heroism is something we don't hail often enough in society or on this opinion page.

'There's a kid shot': Hobart officer says he was among many first responders 'doing good' after Walmart shooting

HOBART — People ran, others stood still and cars poured out of the Walmart parking lot Sunday as police Cpl. Kevin Garber Jr. pulled up in res…

HOBART — The 25-year-old man shot Sunday at Walmart has been wounded in three separate shootings since his release from prison in June, accord…

This week in local crime news: 'There's a kid shot': Hobart officer says he was among many first responders 'doing good' after Walmart shooting

CROWN POINT — A man charged with shooting a boy and his father at a Hobart Walmart will need to post a $200,000 surety bond to be released fro…

An alleged gang member is charged with helping Alex C. Hughes flee authorities Tuesday while Hughes was wanted in the double shooting at a Hob…

HOBART — Police said Monday they suspect a shooting at Walmart that wounded a 25-year-old Gary man and his 9-year-old son was gang-related.

Police were on the scene late Sunday night at the Hobart Walmart investigating a shooting at the store across from Southlake Mall on U.S. 30.

Hobart Police host a press conference on the Sunday night shooting at Walmart.

Police investigate a shooting Sunday night at the Walmart in Hobart. A 25-year-old Gary man and his 9-year-old shot were wounded in the shooting. 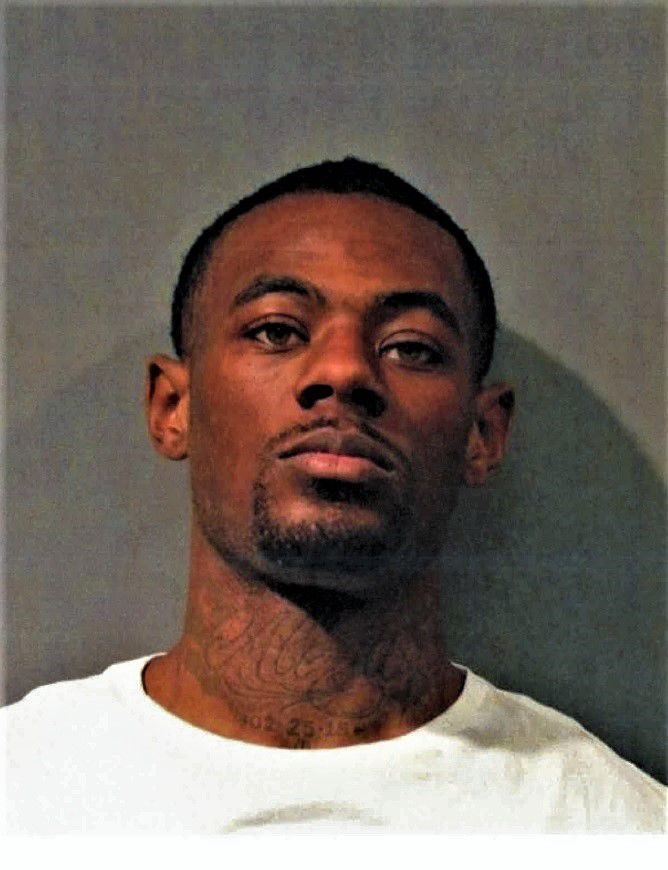