UPDATE: Hammond police say they are investigating arrest of teen at Festival of the Lakes; family alleges excessive force used
Share this
× 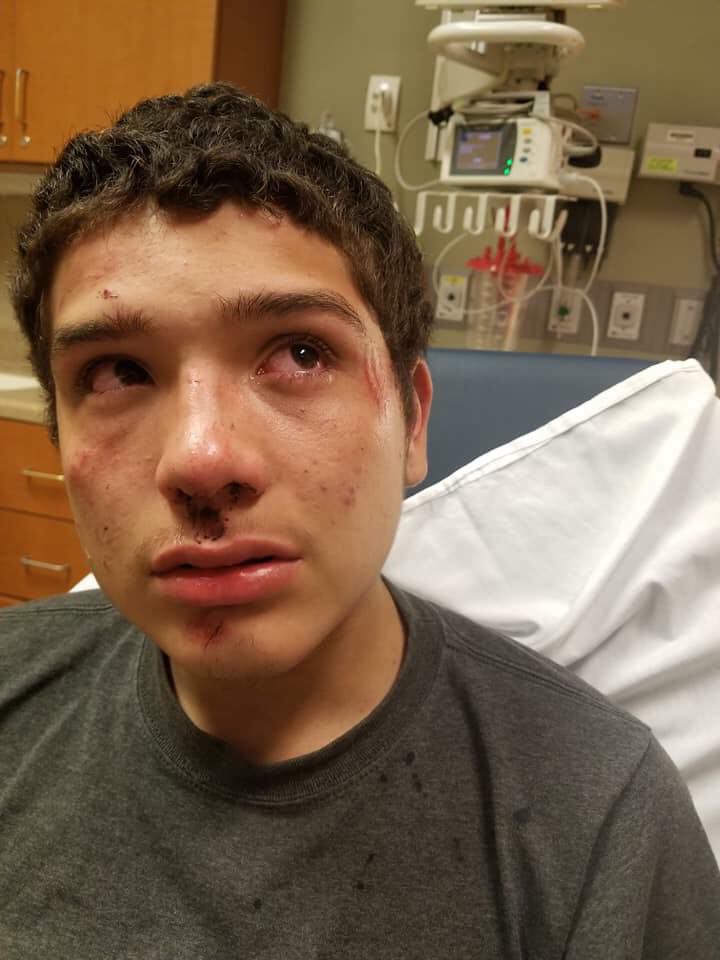 Dominic Garibay, 15, is seen after his arrest Wednesday night at the Festival of the Lakes in Hammond. His family is alleging police used excessive force in his arrest. 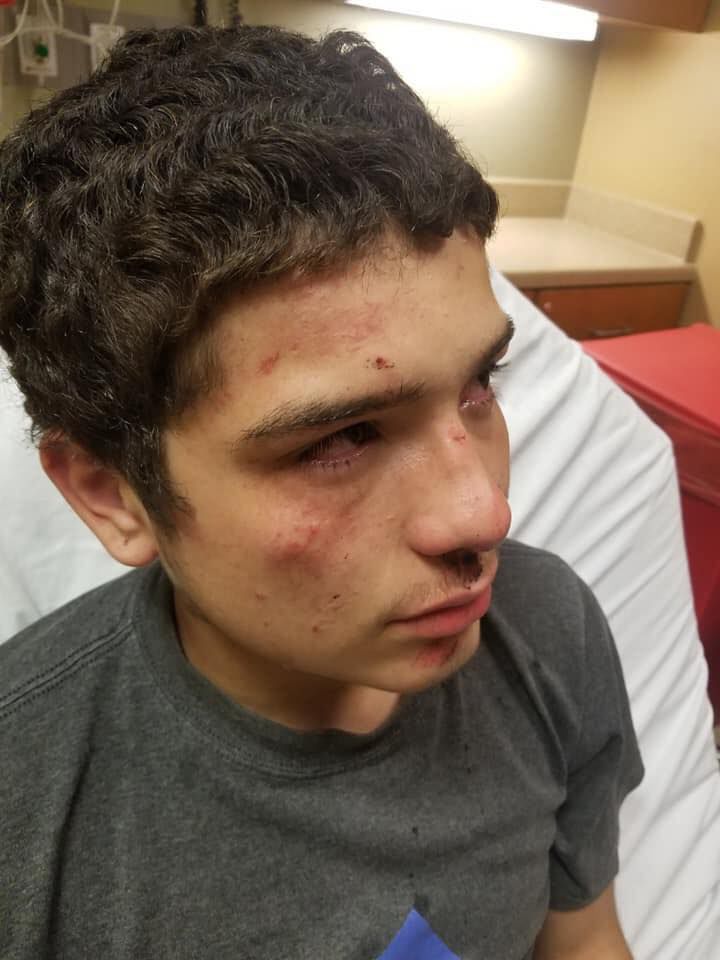 Dominic Garibay, 15, is pictured after his arrest Wednesday night at the Festival of the Lakes in Hammond. 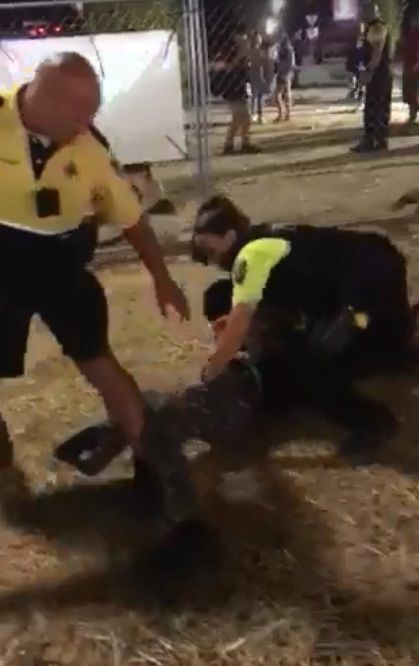 Shown is an image taken from a video of an arrest Wednesday night at the Festival of the Lakes.

HAMMOND — The family of a 15-year-old boy who was arrested Wednesday night at Festival of the Lakes is alleging several officers involved used excessive force by slamming the teen to the ground and placing their knees on his back to restrain him.

A video circulating on social media with the hashtag #JusticeForDominic starts moments after officers with the Hammond Police Department bring the boy — Dominic Garibay — to the ground in an attempt to restrain him.

“As soon as I see two grown officers with their knees in Dominic’s back, I immediately started to scream, 'That’s my son!’” Elizabeth Momontejano, of Hammond, told The Times.

Hammond police Lt. Steven Kellogg, spokesman for the Police Department, said he plans to release body camera footage of the entire incident, including the events that led to the teen's arrest. The footage, contrary to the family’s claims, shows there was “definitely no police assault,” Kellogg said.

He said several of Hammond’s own officers were working security at the festival that night. The department has been made aware of the video circulating online, he said.

"On July 18th, at approximately 11:05 pm, officers working a local festival were breaking up a violent fist fight between two teenage girls. As officers were attempting to secure the area around the fight and affect the arrest of the juveniles, another juvenile male, age 15, attempted to get through the area being blocked off by officers. One officer, told the young man three times to step back away from the area. In an attempt to block access to the fight, the officer extended his arm to keep back the young man attempting to get through the line. The young man slapped away the arm of the officer protecting the scene.

At this point, the officer made the decision to arrest the juvenile for disorderly conduct. The officer attempted to affect the arrest of the male and the male began to yell and resist arrest. The officers on scene took the male to the ground and were able to secure the male in handcuffs. The male continued to resist and yell profanities throughout the encounter. An officer attempted to walk the male to a secure area when he again began to resist arrest and was taken to the ground once more until a transport vehicle could be brought closer to the area.

A thorough investigation is underway to ascertain the facts of the situation and appropriate action will be taken. After all body camera footage has been reviewed, and we know more with certainty and confidence, we will share with you whatever it is we are able to at that time."

Under state law, an individual cannot touch a law enforcement officer, Kellogg said, so the officer attempted to make an arrest.

The body camera footage “clearly shows our officers attempting to de-escalate the situation, telling him multiple times to stop resisting,” Kellogg added, noting the teen continued to resist and shout expletives at the officers.

Dispute over what led to arrest

The boy’s mother said Garibay and his older brother planned to meet up with family at an agreed-upon spot near the main entrance.

They were recording the fight between two women, whom neither party knew, when they realized they had passed the meetup spot, so they decided to leave the crowd and turn around.

“When Dominic turned around, that’s when the cop was right there in his face. He was scared, so he tried to walk around the officer, and the officer grabbed him by his shirt, like he was manhandling him,” Momontejano said. “Dominic was asking, 'What did I do? What did I do?”

Momontejano said the officer then placed her son in a chokehold as other officers arrived on scene, at which point her son is “slammed to the ground on the concrete.”

Kellogg said the officers placed — not slammed — the boy to the ground in order to restrain him. The body cam footage will show the boy was not leaving the crowd, but walking toward the crowd when he touches the officers, Kellogg said.

A video posted by family to social media paints a chaotic scene just outside the Festival of the Lakes’ gates.

At one point, the teen is squirming on the ground as two officers attempt to restrain him, including one officer who placed his forearm on the teen's upper back and neck area to hold him down. Another officer steps in and places his knees on the boy’s back. A third officer places a knee on his legs, according to the footage.

“Get your knees off his back! Carl, record this (expletive)!” Momontejano is heard saying in the video.

Placing knees on a suspect's back is basic protocol to keep him or her from rolling around and getting away, and they were not using their full body weight, Kellogg said.

In the background, a person can be heard saying, “Hey, kid. Your mom’s right here. Please, listen to the cops, kid. Please. Calm down, kid. Calm down.”

"How do you calm down when you feel like you're being choked? He was literally crying for help," his mother said. "They were telling me they were going to lock me up. They were hostile and completely irate. Everyone was rude. They were not professional."

At one point in the video, Garibay yells, “He’s breaking my ribs!”

Kellogg said there's nothing contained in the videos indicating the officers' actions seriously injured the teen, adding that Garibay would not have been able to be transported to the Lake County Juvenile Detention Center unless he was medically cleared.

Momontejano said her son since has been released from custody.

It's unclear if the boy will face formal charges of disorderly conduct or resisting arrest.

Kellogg said the department is continuing to review the use of force in this incident by reviewing evidence and video footage.

“I’ve seen nothing in the videos that we’ve watched so far today that would lead me to believe that any actions that these officers took during this arrest were anything other than what they were trained to do,” Kellogg said.

Garibay suffered some facial injuries in the incident, according to photos posted online.

"It happens all the time. It happens to us, too,” Kellogg said Thursday. “I’m sure my officers are marked up from having to take him down. That’s never a goal of ours, but it sometimes happens when you fight the police.”

Kellogg said the department's body cam footage will be released in the near future.

5 important stories you need to know from yesterday: Hammond police say they are investigating arrest of teen at Festival of the Lakes; family alleges excessive force used

GARY - Police responded to the 2000 block of West 5th Avenue around 9:52 a.m. Friday in reference to a male gunshot wound victim, according to…

Dominic Garibay, 15, is seen after his arrest Wednesday night at the Festival of the Lakes in Hammond. His family is alleging police used excessive force in his arrest.

Dominic Garibay, 15, is pictured after his arrest Wednesday night at the Festival of the Lakes in Hammond.

Shown is an image taken from a video of an arrest Wednesday night at the Festival of the Lakes.