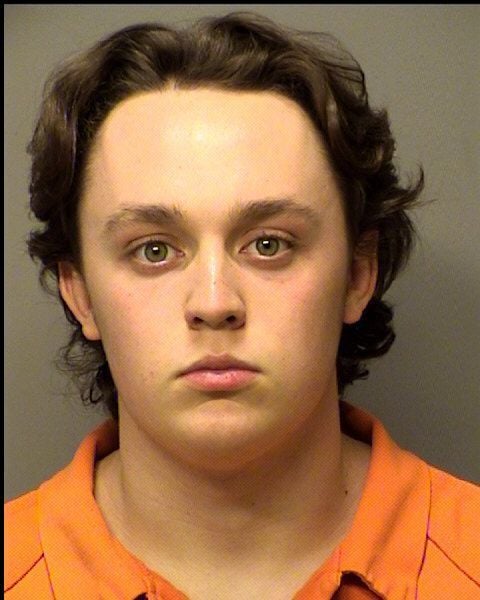 The accused, Connor R. Kerner, told a confidential informant that he shot 18-year-old Thomas Grill Jr., of Cedar Lake, after Grill tried to rob him during a drug deal in the garage of Kerner's grandparents' home in Boone Township, according to the records.

Molley R. Lanham, 19, of St. John, who accompanied Grill, was shown Grill's body and told by Kerner that she could leave but would be killed if she told anyone, police said.

Lanham's family issued a statement Monday afternoon saying, "Molley was a beautiful, loved daughter, sister, granddaughter, niece, and friend. She will be deeply missed by everyone that knew her. Molley was so unapologetically herself. She was spunky, fashionable, and unique in every way imaginable. Molley will be remembered for her love and kindness for all, especially animals."

While family members appreciate the condolences they have received, they asked for privacy and space during their time of grieving.

"Hug your kids, tell them you love them, and always cherish every moment you have with them," the family said.

Details about a memorial service will be released as they become available.

The two teens were 2018 graduates of Hanover Central High School — Lanham a soccer and track athlete and Grill involved in the building trades, according to a statement from Hanover Community Schools Superintendent Mary Tracy-MacAulay.

Kerner is reportedly a student at Valparaiso High School, but the district would not confirm that Monday.

'I killed an innocent girl'

Kerner, who showed no obvious reactions or emotions during the hearing, repeatedly answered the judge with straightforward responses of "yes, sir." He said he has hired defense attorney Mark Thiros, of Merrillville, and was told he faces up to 65 years behind bars on each charge.

He is being held without bond, as is standard for murder, and has future court dates of May 6, June 10 and July 15.

Porter County Prosecutor Gary Germann said juveniles ages 16 and 17 can be charged as an adult in high level offenses such as murder.

The confidential informant, who was reportedly with Kerner in the wake of the killings and who came forward to report the crimes, told police Kerner said he loaded the two bodies into the trunk of their car around midnight the same day of the killings and loaded the vehicle with various containers of flammable liquids, police said. He drove it to the area of 550 South and County Road 250 West in Porter Township and set the vehicles and bodies on fire.

"Kerner's plan was to rent a U-haul truck later and somehow get the car in it and dump it in the Mississippi River," police.

"Kerner told (the confidential informant) that he had done this before and knew how to cover up a murder and get away with it," according to charging documents.

According to the informant, Kerner said on the day of the alleged murders that he had done something "really bad," police said.

"I killed someone and I killed an innocent girl," Kerner reportedly said.

Police said Kerner's grandfather initially told them he had not noticed anything out of place in his garage after returning from being out of town when the incident in question is alleged to have occurred, according to police. He said Kerner and his mother had access to the home because they were caring for a dog.

Shortly after being asked to leave the property while it was searched, he returned and told investigators he had not been truthful, according to charging documents. He said upon arriving home, he noticed a poorly repaired hole in the garage wall and repaired it again, but was not sure it was a bullet hole.

The grandfather said Connor had painted random spots on the garage walls that he then repainted, police said. The garage floor had also been cleaned and he noticed bullet holes through a vehicle bumper and motorcycle seat.

Police said the grandfather also found one of his three guns — a 9mm — and two magazines and gun cleaning supplies missing. He also found a wrench in the garage containing a stain and hair.

He said Connor admitted to taking the 9mm gun, but said he planned to do some target shooting and that it had accidentally fired in the garage, police said. Upon retrieving the weapon, the grandfather reportedly said it felt lighter and appeared to be missing rounds of ammunition.

"(The grandfather) advised that he lied initially because he was scared when we told him what we were investigating," according to charging documents. "He advised he was brokenhearted. He then realized he had to tell police what he knew."

"It is hard to comprehend such a senseless and tragic loss," Tracy-MacAulay said. "Their families are an integral part of the community. Our thoughts and prayers are with the families."

Valparaiso Community Schools said in a prepared statement, "our social work team is always available to students when a difficult situation occurs in the community."

Check back at nwi.com for more details.

CROWN POINT — A man and his brother were charged Friday in a brutal beating that left the man's adult son in a coma for six days last year.

5 important stories you need to know from yesterday: 'Hug your kids, tell them you love them,' victim's family says in wake of double murder charges

31-year-old wounded in shooting in Chicago's East Side neighborhood

CHICAGO — A 31-year-old man was wounded in a shooting early Thursday in the city's East Side neighborhood, police said.