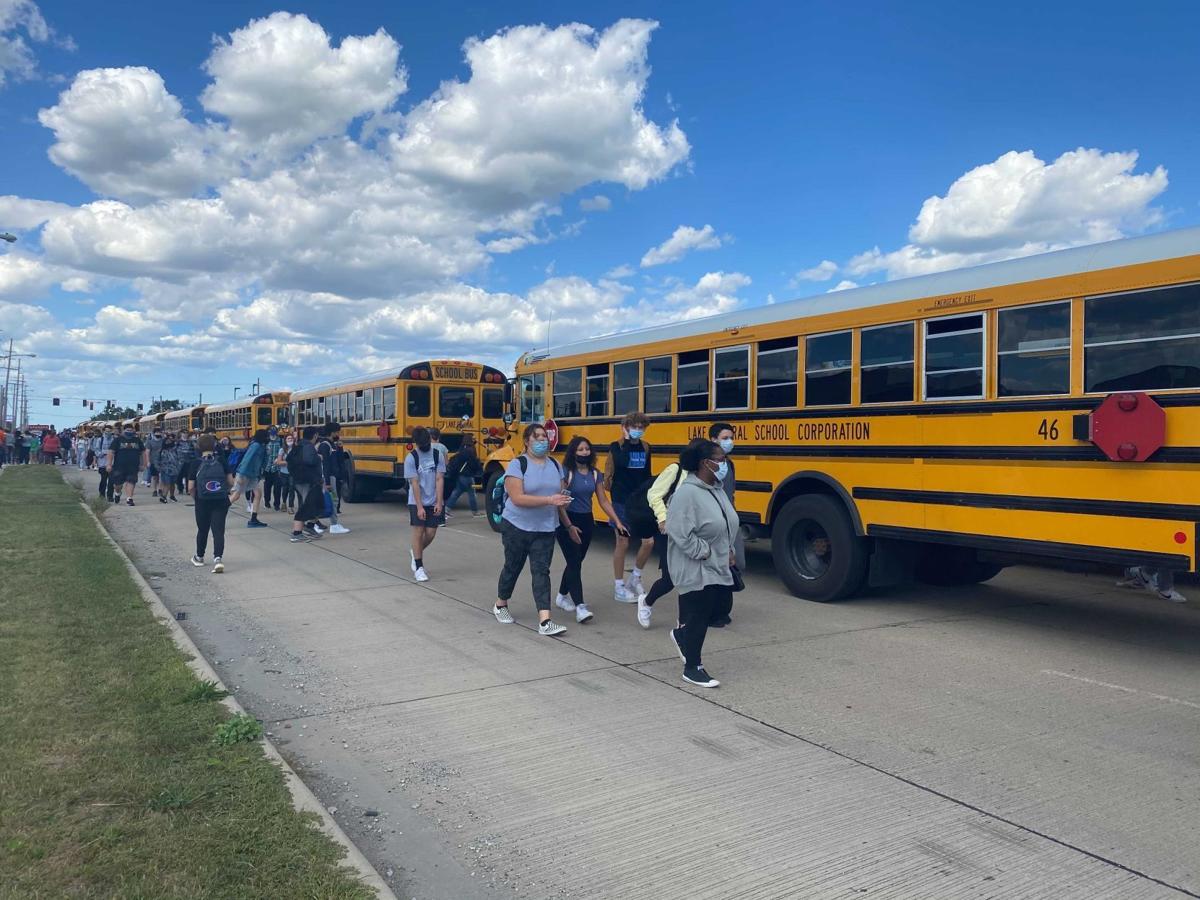 Lake Central High School students leave school Wednesday after a report of an active shooter earlier in the day. Police determined there was no gun and no threats were made. 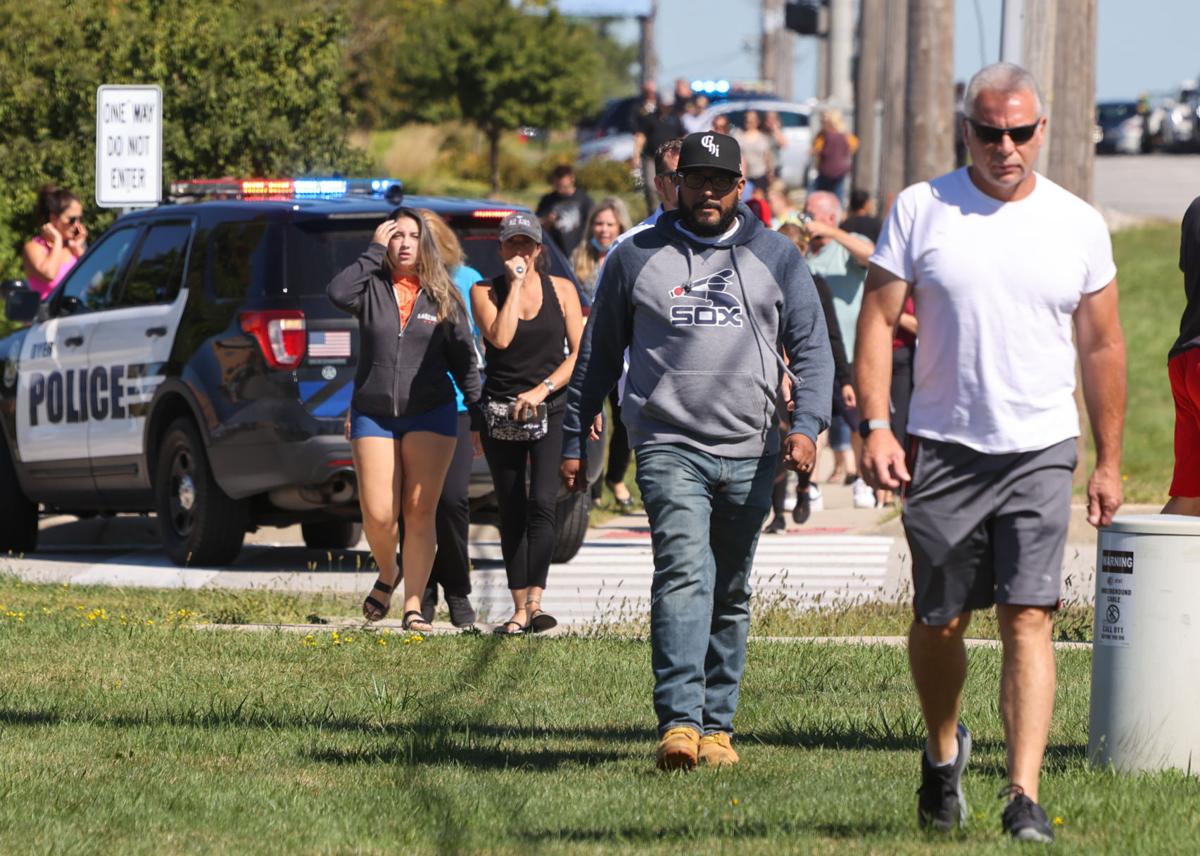 Parents head to a nearby parking lot south of Lake Central High School on Wednesday as they awaited details of a police response. 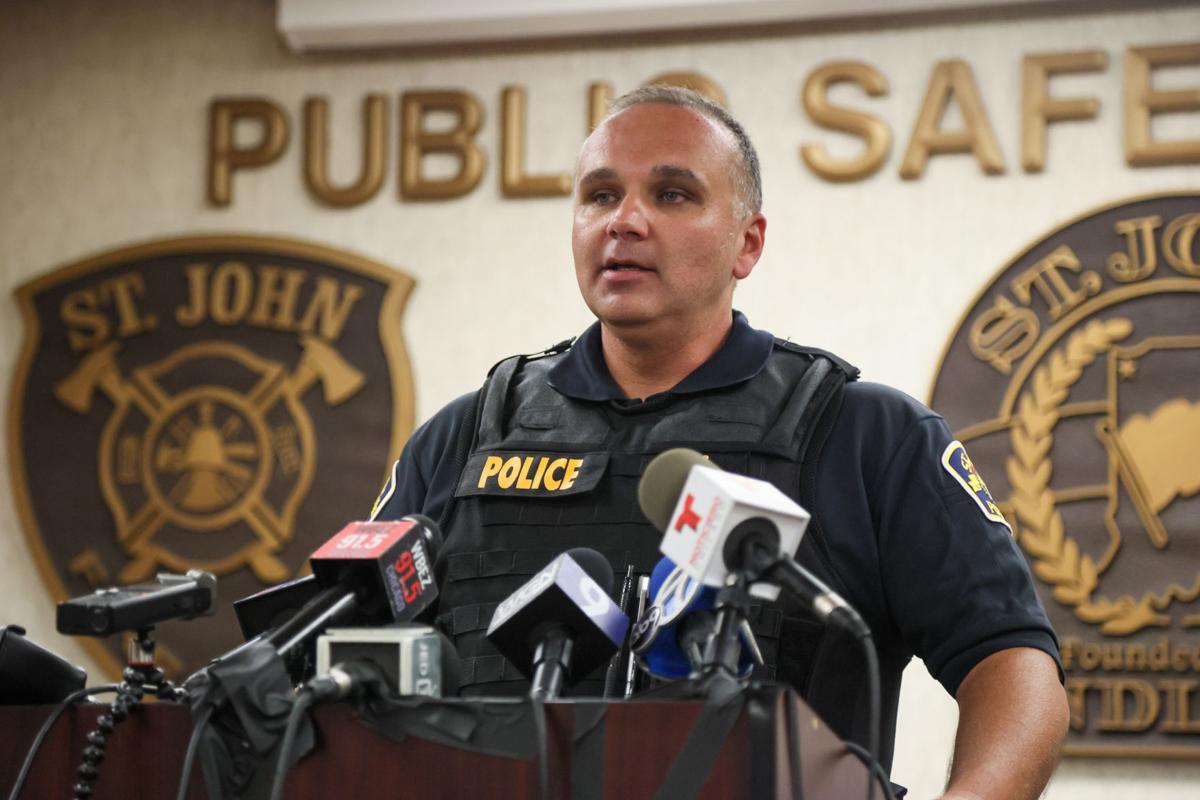 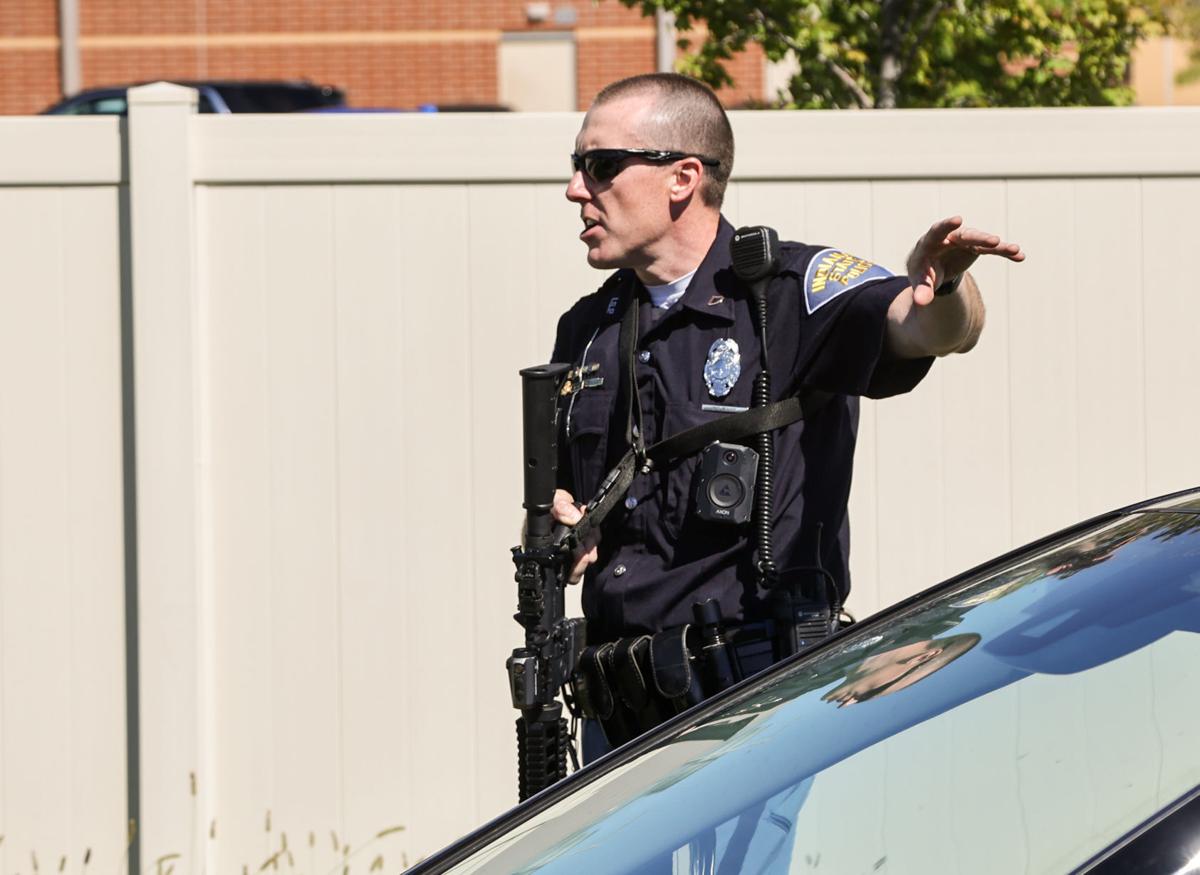 An Indiana State Police officer directs parents and family to a nearby parking lot Wednesday outside Lake Central High School. 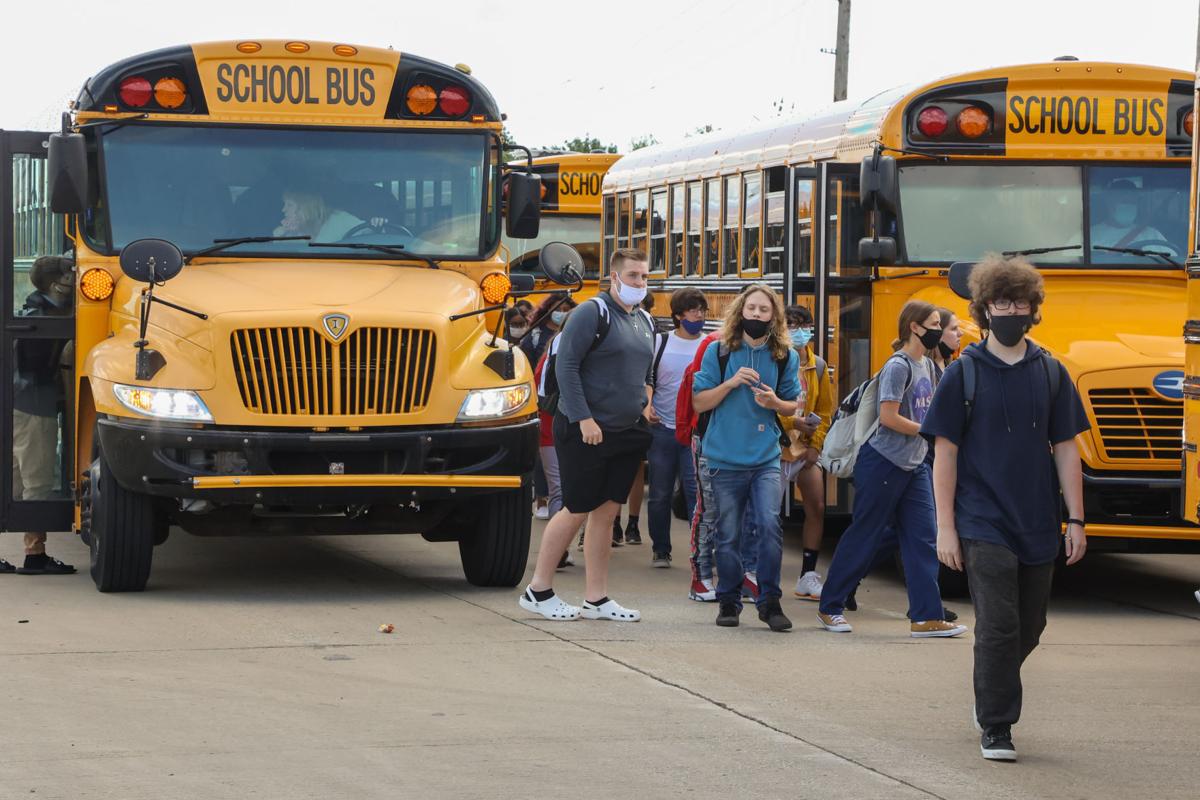 Lake Central students head to their buses Wednesday after being released following a police response at the school. 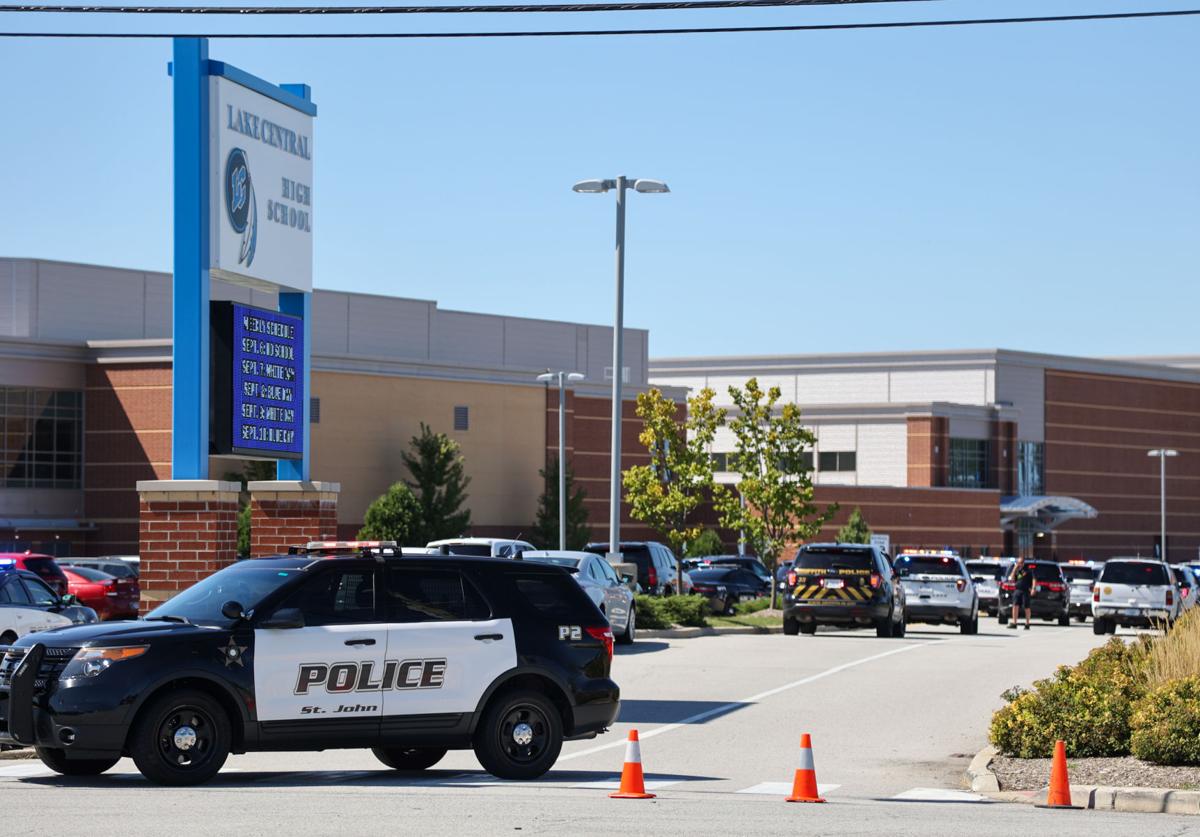 Police from St. John and other communities respond to Lake Central High School on Wednesday.

ST. JOHN — No shots were fired and no gun was found Wednesday morning after police responded to Lake Central High School for a reported active shooter.

Police were dispatched to the school around 10 a.m., and officers quickly determined there was no active threat, St. John Police Chief Steve Flores said at an afternoon news conference.

Because the incident was dispatched as an active shooter, several police agencies, including Northwest Regional SWAT and Lake County Sheriff’s Department SWAT teams, responded in numbers to the secure the scene.

Two students were located by a school resource officer (SRO) and questioned by police, Flores said. While one of the students was in a restroom stall, he heard what he thought sounded like “someone racking a gun.” When he asked another student in the next stall over if he had heard something, the student replied he had headphones on and did not hear it.

During this time, a third student was in the restroom and had exited into the hallway, police said. The third student was located and questioned by police and it was determined this student was not involved and had no idea what the noise might have been.

Flores said police still are not sure what the noise the student heard could have been. The entire school was methodically searched room by room but nothing was found.

“Our response was tremendous,” Flores said. “We had agencies from throughout the entire county. All the way from East Chicago to Cedar Lake and into Illinois. The federal government, the ATF, the FBI were all there and assisted with today’s situation.”

Once the search concluded, students were dismissed. Alarmed parents who came to the school were directed to the nearby Fagan-Miller Funeral Home.

Flores said the majority of the investigation has been concluded and surveillance footage was collected from the school, which also showed no evidence of a gun or an active shooter situation.

There were no arrests or charges being sought in the incident at this time, police said. Flores said he encourages anyone who sees or hears suspicious activity to report it to police and school staff.

“I’d rather be safe than sorry,” Flores said. “I wish it had been dispatched a little differently because we were all going there thinking that people were getting shot and that wasn’t the case.”

Flores said it may be a conversation they address with the Lake County 911 Dispatch Center.

The first person who called said they believed there was a shooter in the third-floor bathroom of the school, and after further questioning, they clarified that they heard the sound of a gun “being reloaded” and saw something “black” in the person’s hand as they walked past the bathroom stall, he said. A second call came from a woman who got a text message from the child that there was a “shooter” on the third floor of the high school. The woman said she texted her child back for more information but received no replies.

“Lake County 911 dispatchers took immediate action, dispatched the St. John Police Department, and provided all of the information available,” Swiderski said. “While dispatchers stayed on the line with the first caller, a police officer located the caller and is heard on the 911 recording gathering additional information.”

Swiderski said within five minutes of the 911 call, the officer at the school informed other authorities through police radio that no gun was immediately located and no shots were known to be fired.

“At that time, the St. John Police Department requested additional law enforcement resources, including SWAT, to the scene to assist with securing the safety of the facility,” Swiderski said. “Lake County 911 wants to commend both callers for remaining calm and promptly answering the questions which led to a swift and thorough response from local law enforcement and partner agencies.”

“In these situations, caller questions are abbreviated, and focus is kept on keeping the caller safe while information is provided as quickly as possible to law enforcement to ensure an immediate response with the most information possible,” Swiderski said.

Superintendent Larry Veracco voiced his appreciation to each facet of the public safety response Wednesday.

“I would like to say that after today’s response I have a much deeper admiration for the ability of law enforcement and public safety officials to come to the aid of a school like ours when there’s a perception of a potential problem,” Veracco said. “It gives us a lot of confidence in the ability of our local people and our SROs to mobilize others to help if it had been a true serious safety threat.”

Both the police chief and the superintendent said the thorough and large response was a sign of the times.

“I think what triggers this response is that it’s happening across the nation,” the superintendent said. “Not just at schools but at concert venues and theaters and other things. So there’s always a chance that someone hears something and it sounds familiar and it ends up being perhaps being an overreach, but as the chief said earlier, better safe than sorry.”

After-school activities for Wednesday were canceled but Veracco said it appears the incident would not affect any other school operations.

The father of a senior at the school, who The Times agreed not to identify, said his daughter sent a text message shortly after 10 a.m. saying an active shooter was announced over the school's public address system.

Students were told to hunch down and were moved to various rooms according to the father.

"She heard a lot of screaming," the father said.

Neither his daughter nor another student he was in touch with heard any gunshots.

Vicki Parks said her 14-year-old daughter who is a freshman texted her saying she wasn’t sure if the lockdown was a drill or the real thing.

When she found out it was real, Parks said she felt hollow and like she was going to puke.

She wanted to get to the school as quickly as she could to be “close enough but out of the way.”

Parks said her daughter was supposed to go to an audition Wednesday night, but after the incident, that wouldn’t happen. Her daughter tried to audition for a production in previous years, but the pandemic got in the way that time.

“They just want to be back in school and with their friends,” she said of both the pandemic and Wednesday morning’s events.

A group of parents and siblings of Lake Central students gathered earlier Wednesday on the other side of the fence separating the school from local businesses. These family members said their students texted them when the lockdown started.

All of their students, they said, knew the lockdown was not a drill.

One young woman said her sister is a freshman and texted her around 10 a.m. to tell her what was going on. But she was disappointed that the school didn’t communicate anything with the families until hours later.

She said she’d even like to see metal detectors or something to help protect against situations such as these.

Kids come to school to learn, she said, not to wonder “Am I going to go home today?”

The other parents echoed the disappointment that it took so long to get information from the school.

One mother said she came straight from work. When it comes to her child, she said, “there’s no such thing as work.” She could find another job, if she needed, she said.

The group used words like “overwhelmed” and “mental toll” to talk about Wednesday’s events.

Teacher and assistant softball coach Jeanette Gray recalled the day in a tweet:

"Not going 2 lie. It was scary 4 most of the day 2day at Lake Central. Thank u to ... all the first responders that kept us safe. (heart) everyone that checked in on me. The 22 students that hid in a small storage room w me — you guys did so well! We are all safe."

Brothers Emonte Morgan and Eric Morgan were indicted Friday after being previously arrested and charged with multiple felony counts.

Lake Central High School students leave school Wednesday after a report of an active shooter earlier in the day. Police determined there was no gun and no threats were made.

Parents head to a nearby parking lot south of Lake Central High School on Wednesday as they awaited details of a police response.

An Indiana State Police officer directs parents and family to a nearby parking lot Wednesday outside Lake Central High School.

Lake Central students head to their buses Wednesday after being released following a police response at the school.

Police from St. John and other communities respond to Lake Central High School on Wednesday.