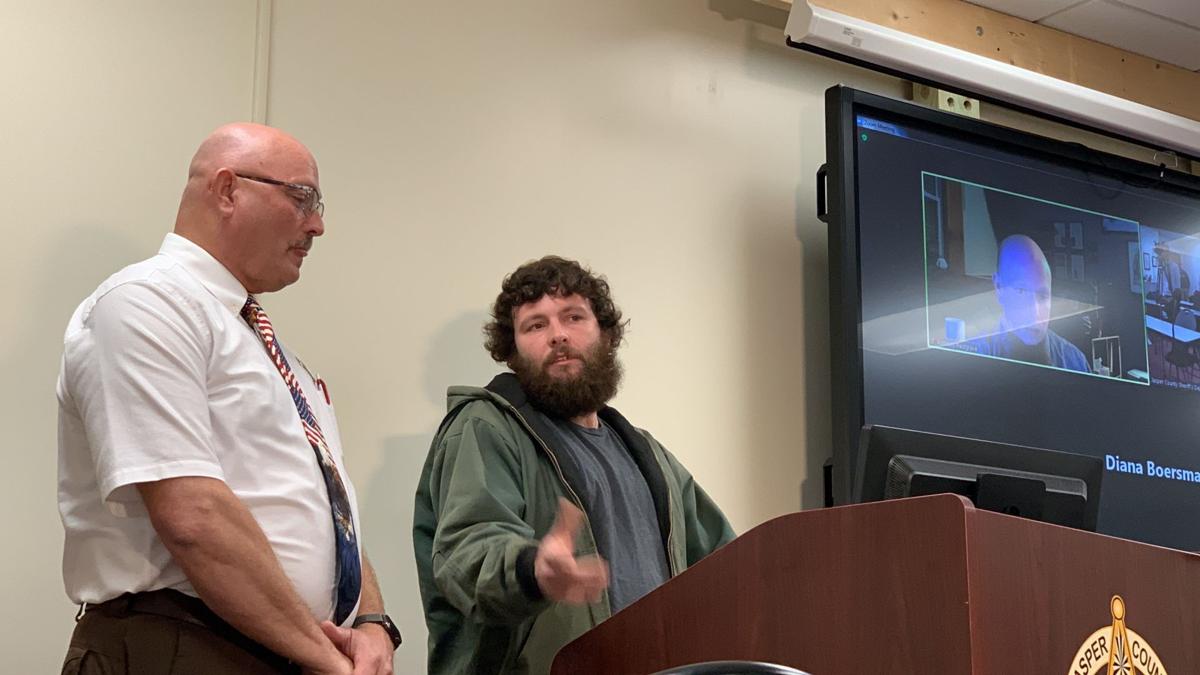 Joshua Shuck, nephew of homicide victim William J. "Bill" Lewis, talks about the uncle who died before Shuck was born. Beside him stands Jasper County Coroner Andy Boersma, who hired a company specializing in DNA forensics to finally put a name to the homicide victim found in a farm field four decades ago. 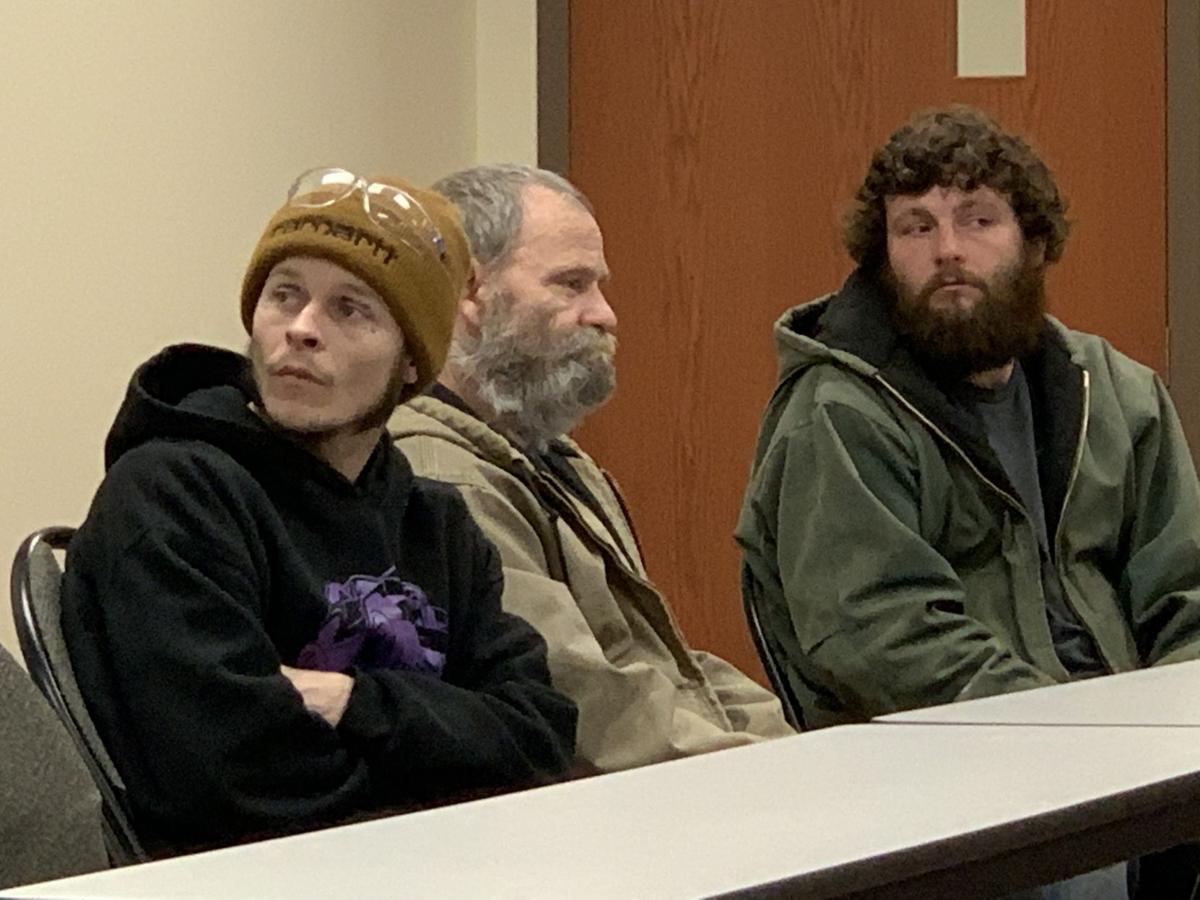 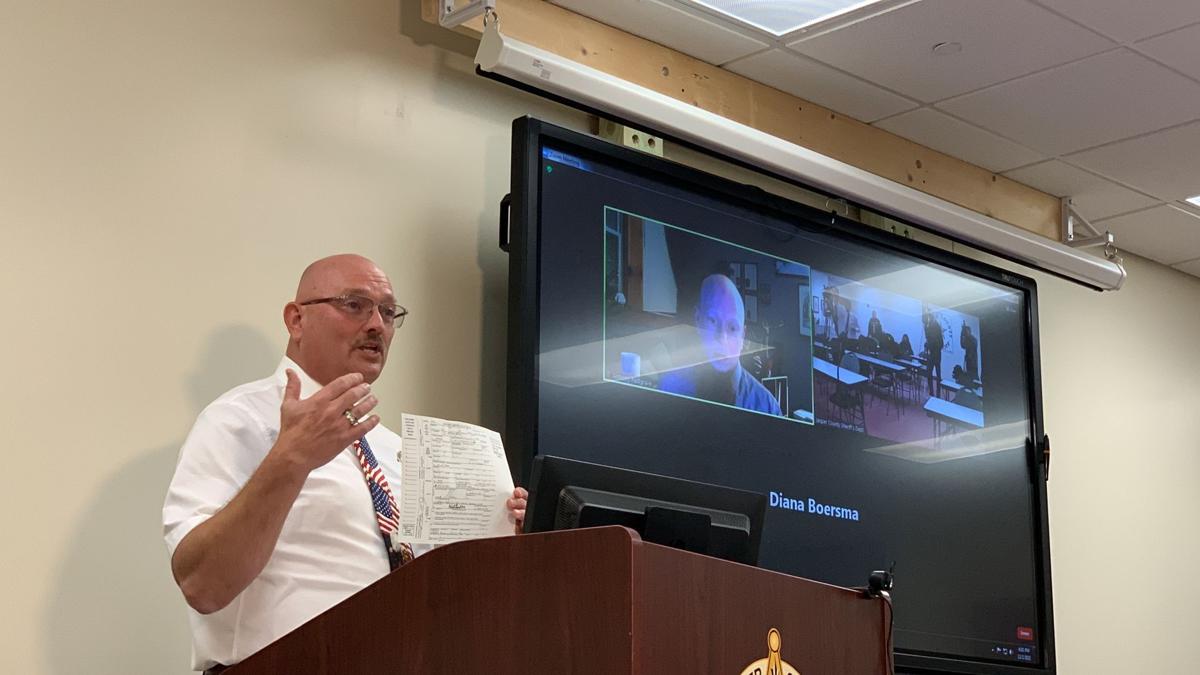 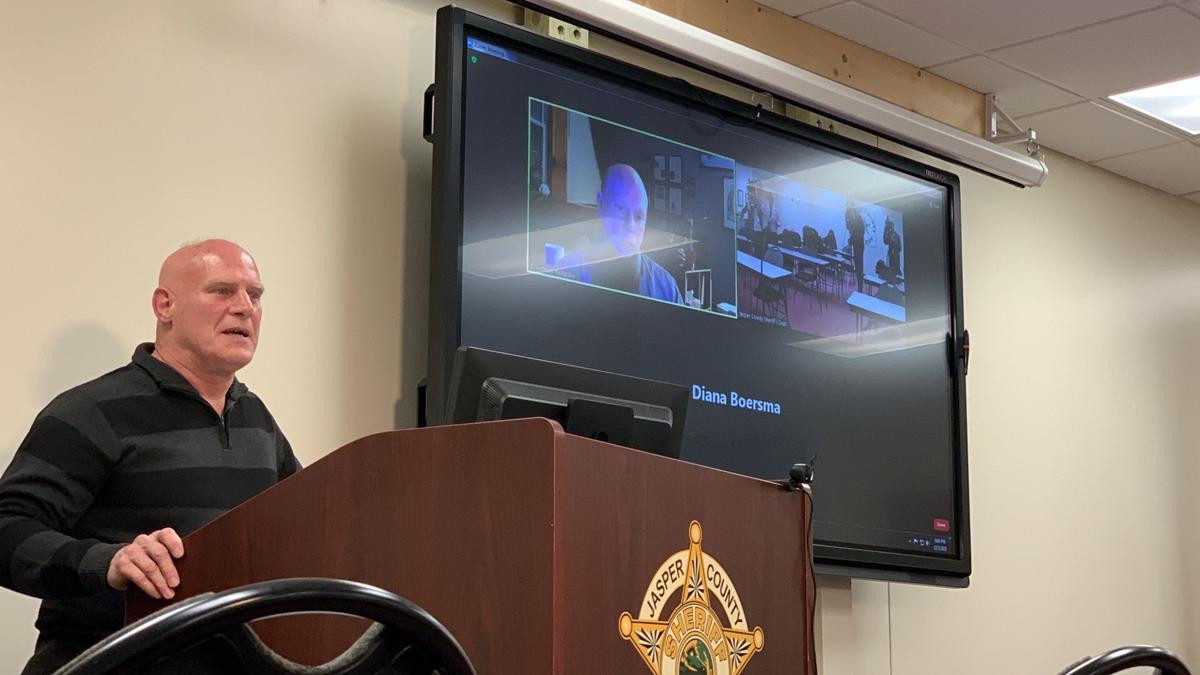 Retired Jasper County Detective Paul Ricker was the first on the scene after William J. "Bill" Lewis' remains were first discovered in 1983. Lewis was not identified as the victim until last month. 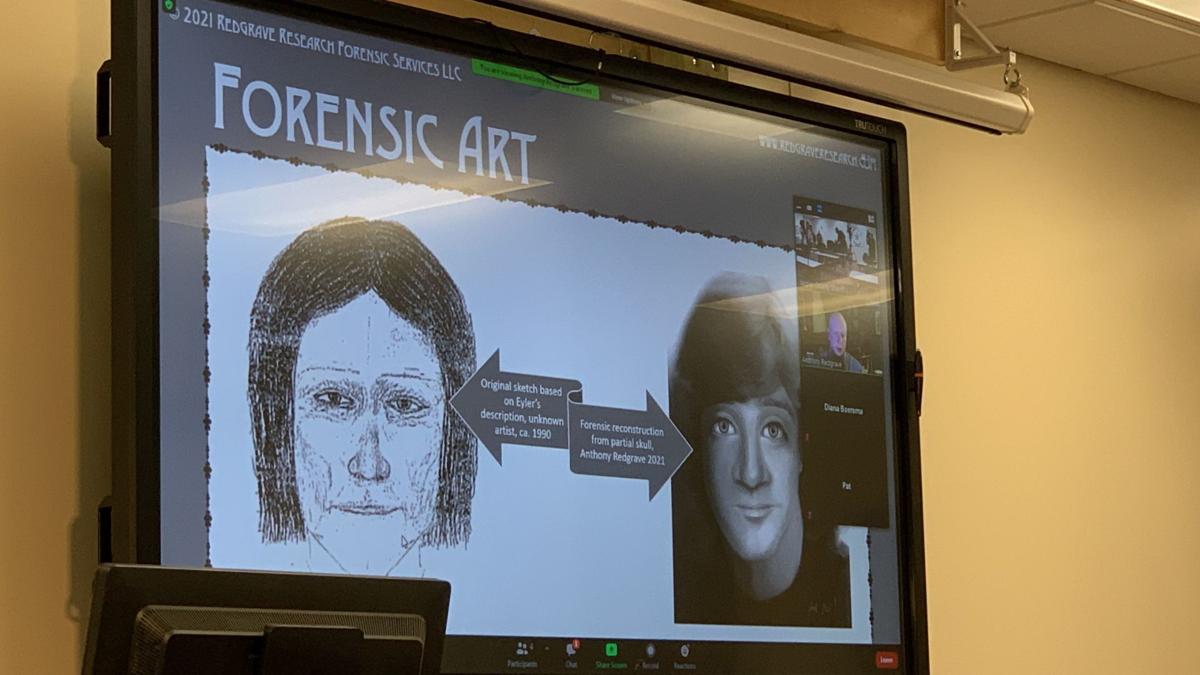 A sketch created of homicide victim William J. "Bill" Lewis based on information provided by his killer, Larry Eyler, is shown at left. Beside it is an artist's forensic reconstruction based on the skull characteristics.

RENSSELAER — More than 38 years after his remains were found by a fox hunter setting traps in a Jasper County field, a 19-year-old Indiana man has been identified as yet another victim of serial killer Larry Eyler.

William J. "Bill" Lewis, of Peru, Indiana, was last seen by his family in February 1982 at a friend's funeral in Houston, Texas.

Lewis planned to hitchhike home, which was a normal practice for him, but never made it, Jasper County Coroner Andy Boersma said.

Boersma was joined by members of Lewis' family, retired Detective Paul Ricker and current members of the Jasper County Sheriff's Office on Thursday night at a news conference to announce Lewis had been identified.

Shuck said his grandmother, who once wrote to "Unsolved Mysteries" seeking help, never gave up hope that Lewis was still alive.

She died last year, before Boersma reached out to Redgrave for help identifying the remains found so long ago.

Shuck, 32, said he never knew his uncle Bill, but he always wanted to meet him.

People around Peru told Shuck his uncle played football and was a quiet person, he said. Shuck's father, Roy, used to tell him Bill was killed by the mob, because he was there one day and vanished the next. Roy never really knew what happened to his brother, he said.

"It's rough, but the closure is nice," he said.

Eyler, dubbed the Highway Killer, confessed to his defense attorney, Kathleen Zellner, in 1994 to killing more than 20 young men and boys.

In one of those confessions, he talked about picking up a young man in fall 1982 along U.S. 41 near Vincennes, Indiana.

Eyler told Zellner he bound, gagged and assaulted the man and dumped his body in a field in Jasper County, Boersma said.

Jasper County sheriff's police knew the unidentified remains found in 1983 belonged to one of Eyler's victims, but they didn't have enough evidence to determine the man's identity until now.

Ricker said he was the first deputy on the scene in 1983. He received a call that a possible monkey skull had been found in a field, which hadn't been worked in some time, he said.

He arrived and as he scuffled his feet around in the dirt, he kicked up a jawbone and the teeth had fillings in them. That's when he began his investigation, he said.

For about two weeks, Ricker worked from 7 or 8 a.m. to midnight collecting evidence from the scene and documenting and photographing it back at the old Sheriff's Office, he said.

His department and Indiana State Police sent out alerts with information about the case, but the investigation went stale, he said.

In 1994, he went to talk to Eyler in prison, but when Eyler saw Ricker wasn't his attorney, he turned and walked out.

Ricker got a call later from Zellner, who offered to meet with him in her Chicago office to share information.

Eyler was on death row at the time for the 1984 murder of 15-year-old Danny Bridges, whose body was found in eight garbage bags in a dumpster in Chicago in August 1984.

Eyler died in an Illinois prison in 1994, and Zellner released his confessions after his death.

A serial killer in Hammond

'This is somebody's kid'

Boersma inherited Lewis' case about 20 years ago, during his first term as Jasper County coroner.

He and Ricker said they were grateful to Redgrave for helping to finally bring the case to a close.

Boersma said his office made a couple of previous attempts to identify the remains through DNA, but received no conclusive results, he said.

The man's DNA was processed and uploaded to the GEDmatch database, which allows people to compare their results from DNA tests from companies such as Ancestry or 23andMe to other people.

Worters led the research under the guidance of lead forensic genetic genealogists and instructors Anthony Redgrave and Lee Bingham Redgrave and help from other student interns. The team found a potential candidate for identification in six days, Redgrave said.

Boersma requested assistance from the Tomball, Texas, Police Department to take a DNA sample from Lewis' sister, he said.

Just before Thanksgiving, Boersma was able to deliver the news to the family that Lewis had finally been positively identified, he said.

"The wheels of justice sometimes turn pretty slow, but we didn't want to forget him," Boersma said.

The family is planning a formal service for Lewis, and his remains will be returned to Peru for burial next to his father.

"This is somebody's kid, and somebody has to take him home," he said.

Redgrave estimated the cost for such an investigation was about $6,000. Boersma later said his office was able to secure grants to pay about half of the cost.

Redgrave said he began using this method of technology in 2018, but others had been working with it earlier.

"The theory was always there," he said. "When adoptees started finding out about their birth parents, people began thinking, 'Why can't we use this for cold cases?'"

Redgrave said the method his team uses is a new field.

"This is an effective way to bring about closure in a case," he said. "And in my opinion, it's only going to speed up."

He team was involved in two other identifications also announced Thursday, he said.

Redgrave said his team researched 67 DNA matches and developed a "research tree" with more than 10,000 individuals, which led his team to Lewis' sister.

To learn more about how to share DNA test results with law enforcement, go to Help.FG4LE.com.

The woman's boyfriend was charged Saturday with felony neglect of a dependent, two counts of resisting law enforcement and misdemeanor carrying a handgun without a license.

"(Lucia 'Lucy' Gonzalez) was a wonderful woman, and ultimately she gave her life so society could be saved from Mr. Wilbourn," a deputy prosecutor said.

Eric K. White, 20, of Calumet City, is accused of leading police on a chase that resulted in the deaths of his 20-year-old girlfriend and their 1-year-old son.

"He began by putting eye drops into her cup of pop," LaPorte Superior Court records state.

The defendant failed to uphold his responsibilities as a police officer when he shot and killed a man last year after being invited into the man's basement for drinks, the judge said.

A quantity of suspected ecstasy pills and marijuana also were found following the crash, police said.

Seidelman is wanted on charges of dealing methamphetamine and possession of narcotic equipment.

Anyone who has information on the suspects' identities is asked to call Highland Detective Darren Conley at 219-838-3184.

Mayor Jerome Prince vowed the city police department "will use every tool available to bring the person or people responsible for this heinous act to justice."

Joshua Shuck, nephew of homicide victim William J. "Bill" Lewis, talks about the uncle who died before Shuck was born. Beside him stands Jasper County Coroner Andy Boersma, who hired a company specializing in DNA forensics to finally put a name to the homicide victim found in a farm field four decades ago.

Retired Jasper County Detective Paul Ricker was the first on the scene after William J. "Bill" Lewis' remains were first discovered in 1983. Lewis was not identified as the victim until last month.

A sketch created of homicide victim William J. "Bill" Lewis based on information provided by his killer, Larry Eyler, is shown at left. Beside it is an artist's forensic reconstruction based on the skull characteristics. 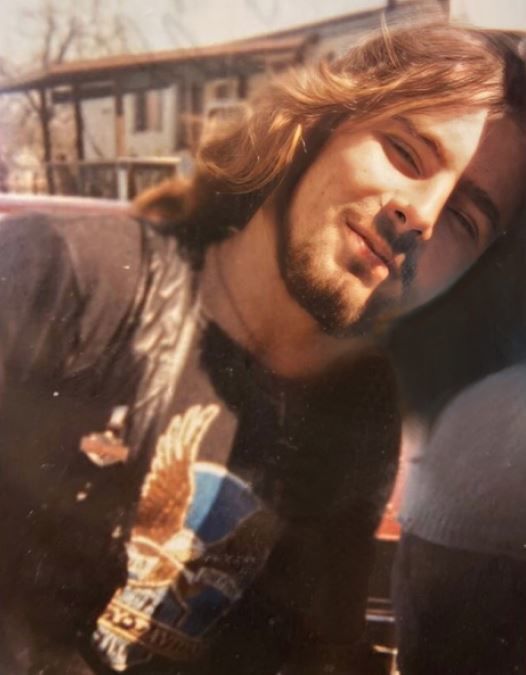