CROWN POINT — Lake County put on a homecoming worthy of a big screen gangster movie for the return of the Lillian Holley car.

The jet black 1934 V-8 Ford that depression-era desperado John Dillinger stole in his famous jail escape 87 years ago cruised back to the Sheriff’s House on Saturday afternoon.

A crowd of several hundred cheered as it stopped in the middle of South Main Street and gathered in a scrum to photograph it, take selfies, and touch and admire this piece of Hoosier history.

Roger Pace, a longtime Crown Point Realtor and organizer of the event, called it the most famous escape car in the country.

On Saturday morning, spectators and officials were able to get an up close look at the Dillinger escape vehicle before it made its way back to…

Pace recounted for the crowd Dillinger's escape in it, north on Main Street and west on 93rd Avenue into Illinois, before abandoning it that night on a Chicago street.

Police officers and civilians stand outside of Lake County Sheriff's House and Jail, as they await the parade led by John Dillinger's escape vehicle.

Pace said it was feared the car had long ago been scrapped. But history buff and current owner Mark Love, an Arizona resident, tracked it to a family in Maine who had bought it in a Chicago police car auction.

He said many of the car’s original parts, including its siren and shotgun holster, have been salvaged and restored.

It returned to a city steeped in history and love of classic cars.

Among the crowd was Dale McCauley, of DeMotte, who remembered the old Lake County Jail and Criminal Court buildings when they were still in operation in the 1960s.

I went there with my dad who had to get my 17-year-old brother out of some kind of trouble,” he said.

McCauley also recalled eating in the jail’s garage after it was transformed in the late 1970s into the SOB Speakeasy Restaurant.

The car John Dillinger used to escape from Crown Point was brought back Saturday in Crown Point to be featured in a Discovery Channel program.

Kim Marshall, of North Judson, wearing a John Dillinger hoodie and T-shirt, said she has attended a number Dillinger-themed events and visited some of his Midwest crime scenes, his boyhood home and his grave site in Indianapolis.

“Yeah, he was a bad guy, but he came from a poor family and lost his mom at an early age,” Marshall said.

A distinguished looking Donald Kasper, a long-retired Lake County police officer, stood at attention, with a silvery-tipped cane and in a formal suit on the Sheriff’s House porch.

Kasper was there in honor of his recently deceased wife, Carol, a granddaughter of William Patrick O’Malley, the East Chicago police officer Dillinger was charged with killing in 1934.

Pace said he was commemorating Saturday event in honor of Lillian Holley and law enforcement. He said parts of the V-8 Ford that couldn’t be used again will be auctioned off later, with the proceeds going to the families of fallen police officer.

Holley acquired the car, now associated with her name, through just such a tragedy.

Mark Love of Avondale, Arizona exits the car John Dillinger used to escape from Crown Point. He restored the car and is the current owner.

She was 42 years old and the mother of twin daughters, when her husband, then-County Sheriff Roy Holley was killed on duty during a 1933 shootout over a farm eviction.

Local officials chose her to complete the rest of her husband’s term in office. Pace said she was one of the first female sheriffs.

Less than a year later, Dillinger, whose gang was grabbing national headlines for robbing banks around the Midwest, shot O’Malley while fleeing the First National Bank at Indianapolis Boulevard and Chicago Avenue in East Chicago.

Authorities arrested Dillinger later in Tuscon, Arizona, and returned him to Lake County.

Instead he was held in the less-than-escape-proof Lake County Jail.

Controversy still swirls over the question of whether someone slipped Dillinger a real pistol or whether he brazened his way out with a wooden or soap-carved replica.

Regardless, Dillinger made his break March 3, 1934.

Dillinger formed a new gang and stayed one step ahead of the FBI for the next four months, until law enforcement officers cornered him in an alley outside Chicago’s Biograph Theater where he had just seen a crime drama, “Manhattan Melodrama.”

Holley’s family have said she seethed privately at state and local officials who put her in the embarrassing limelight. Pace said a later investigation absolved her of all blame.

She remained in Crown Point, living in a stately, white Victorian three-story until her death in 1994 at age 103.

Dillinger’s exploits have inspired more than a dozen films, including Universal Studio’s "Public Enemy," which was shot on location at the old jail during three days in March 2008.

The episode, aptly named "The Imprisoned," will debut Wednesday, marking the third episode of his documentary series, which marries U.S. history and paranormal investigations. 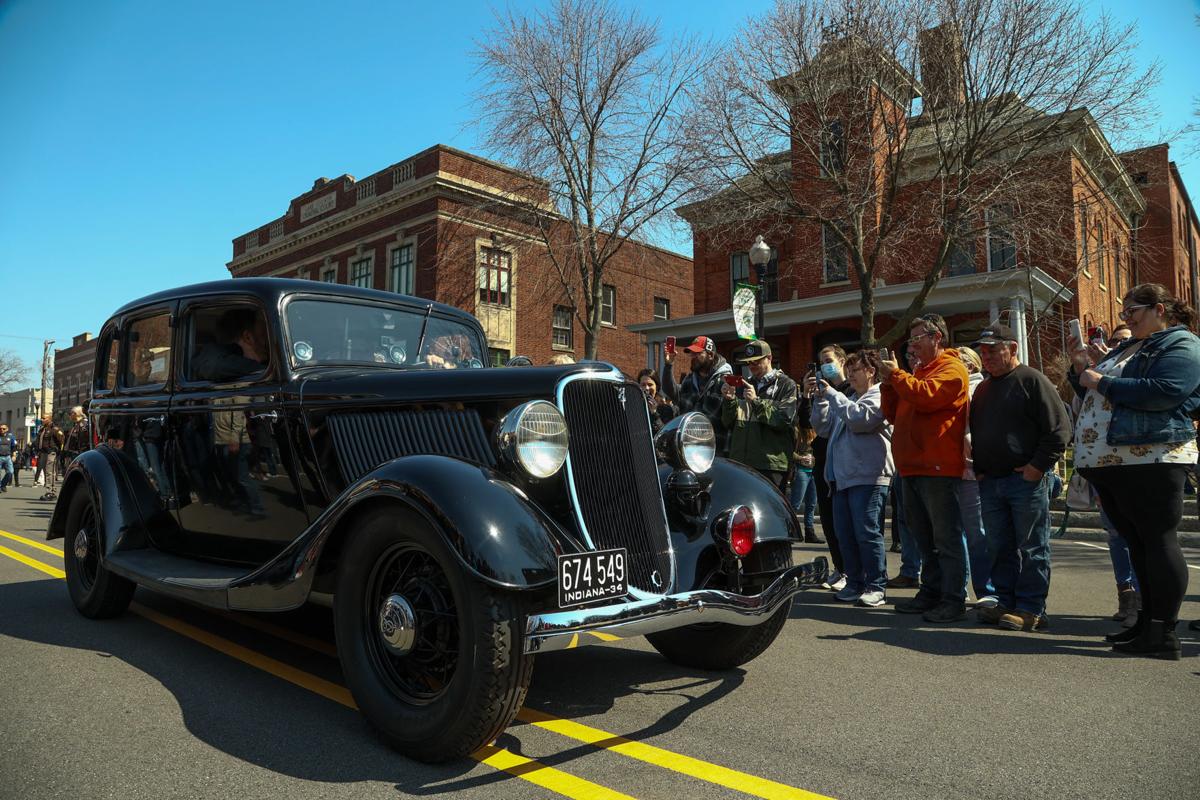 The car John Dillinger used to escape from Crown Point was brought back Saturday in Crown Point to be featured in a Discovery Channel program. 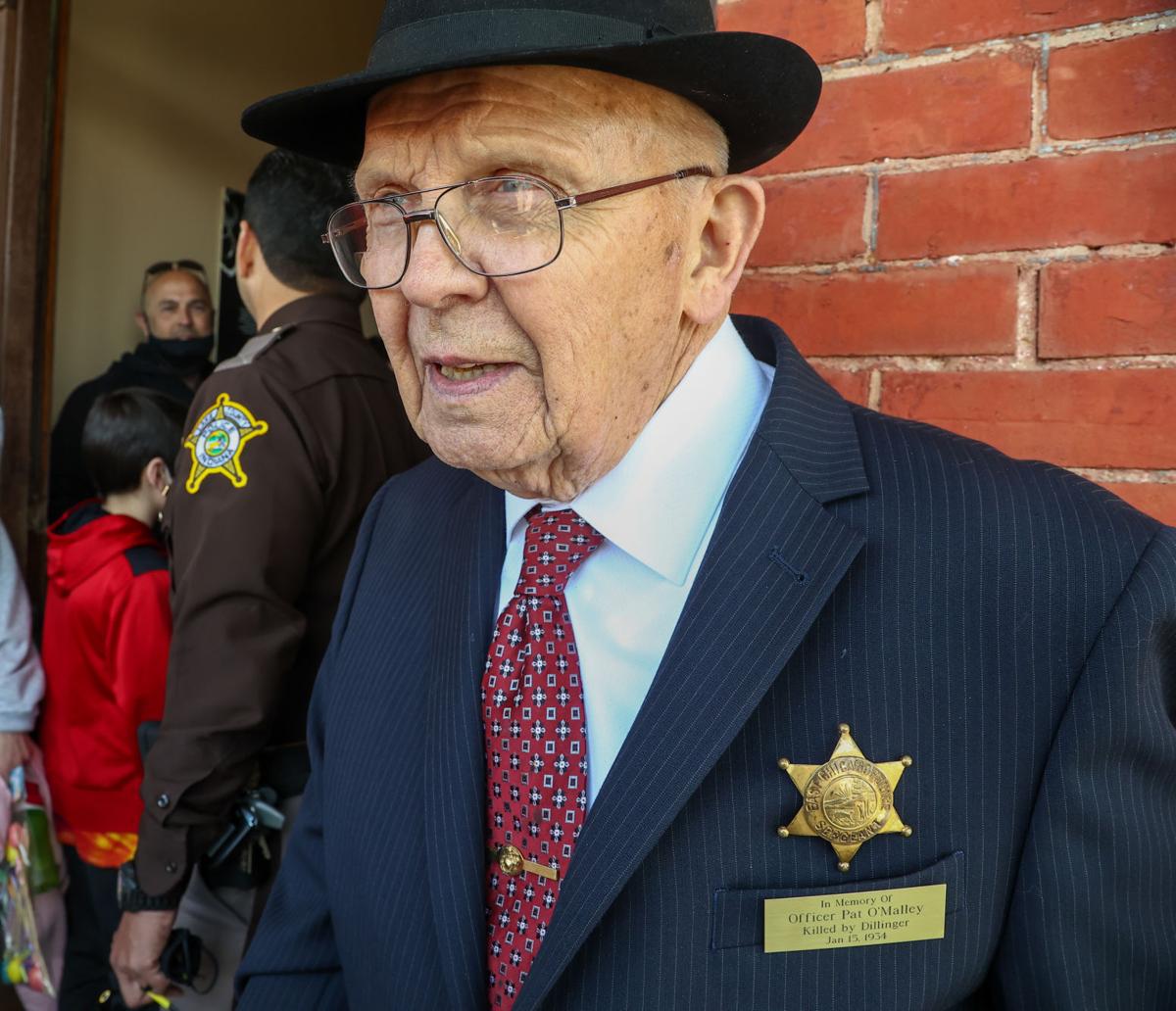 Former Lake County Sheriff's Police deputy Don Kasper was married to the granddaughter of Patrick O'Malley who was the police officer killed by Dillinger's gang during a bank robbery in East Chicago. 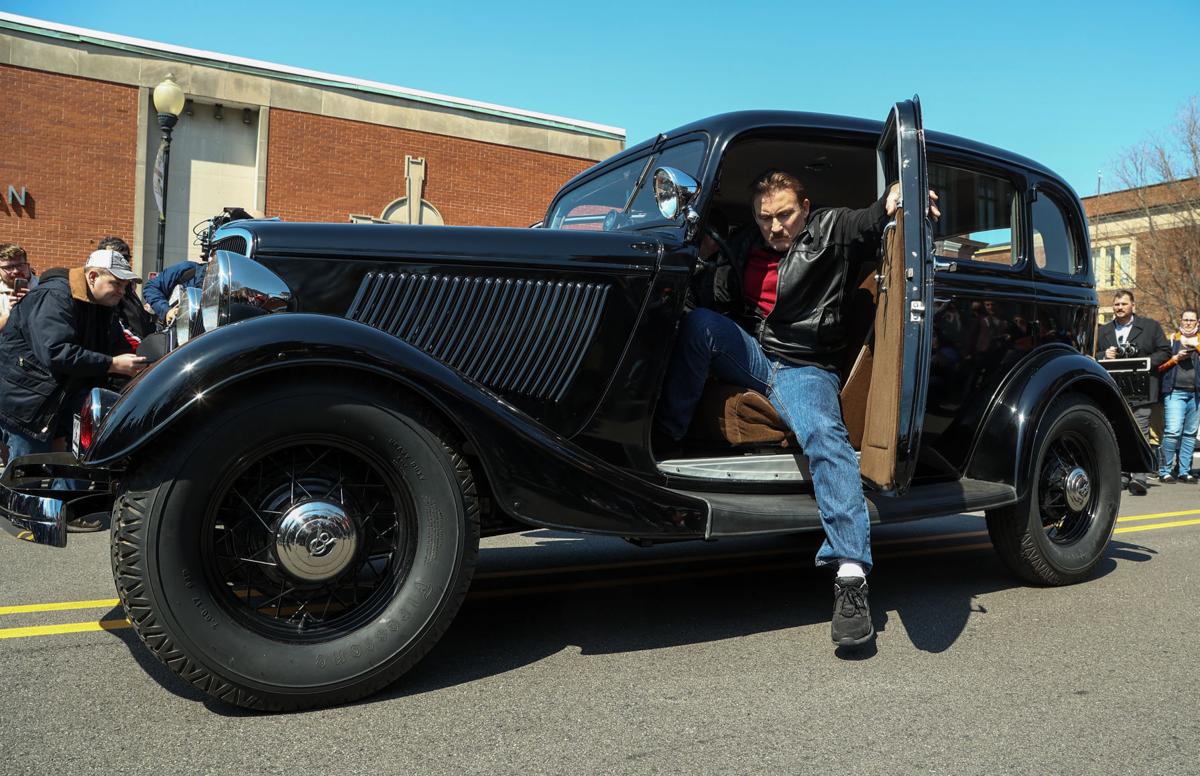 Mark Love of Avondale, Arizona exits the car John Dillinger used to escape from Crown Point. He restored the car and is the current owner. 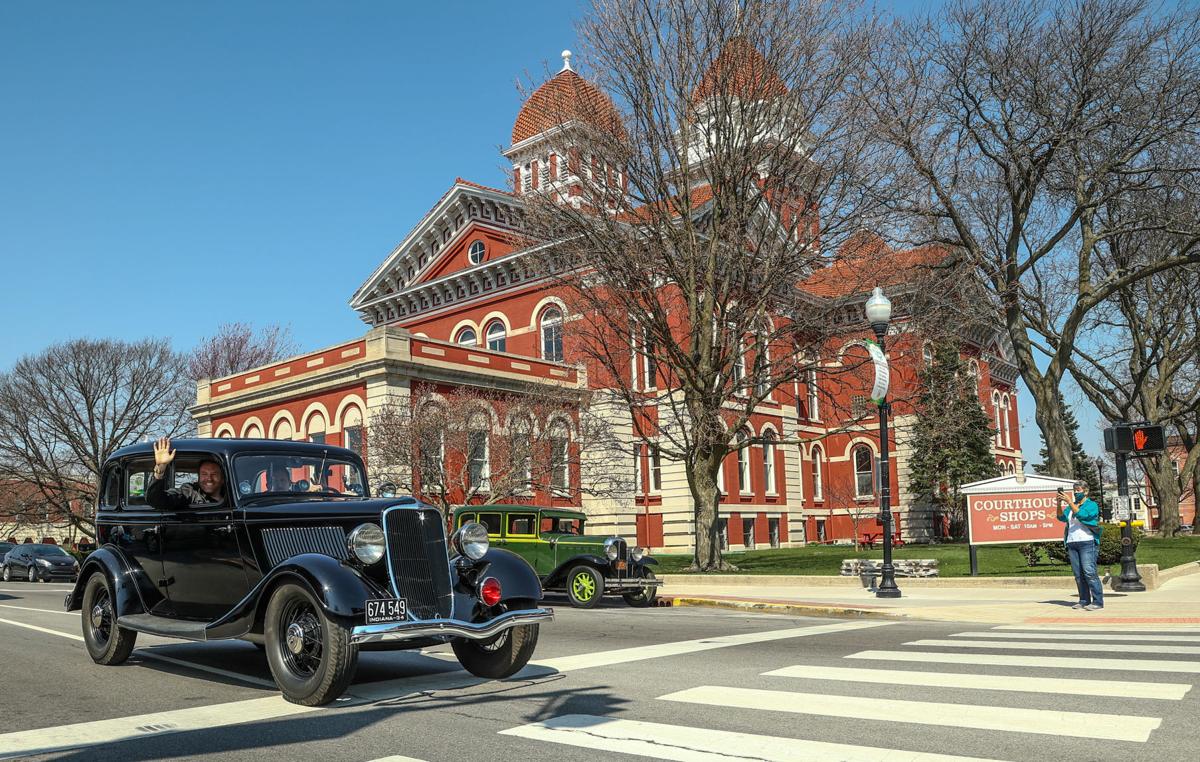 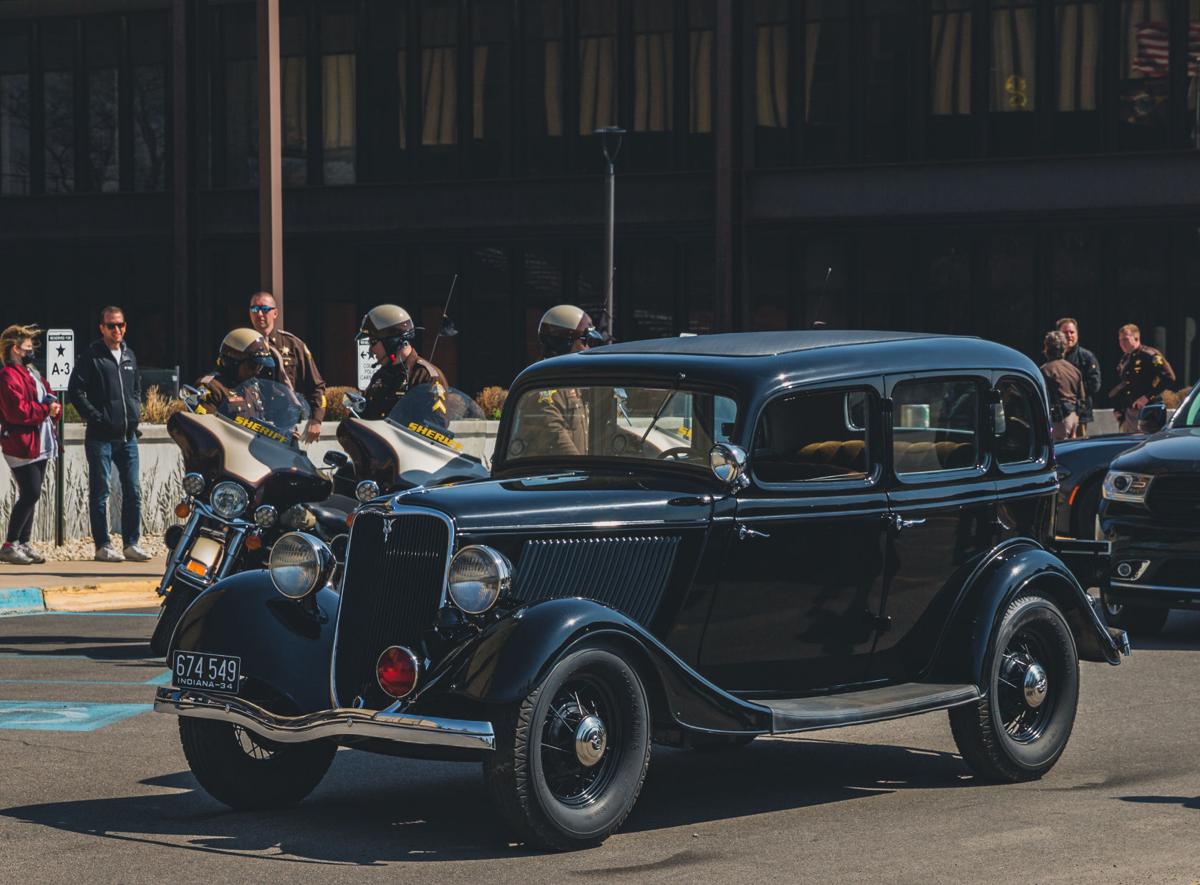 On Saturday morning, spectators and officials were able to get an up close look at the Dillinger escape vehicle before it made its way back to Crown Point's downtown square. 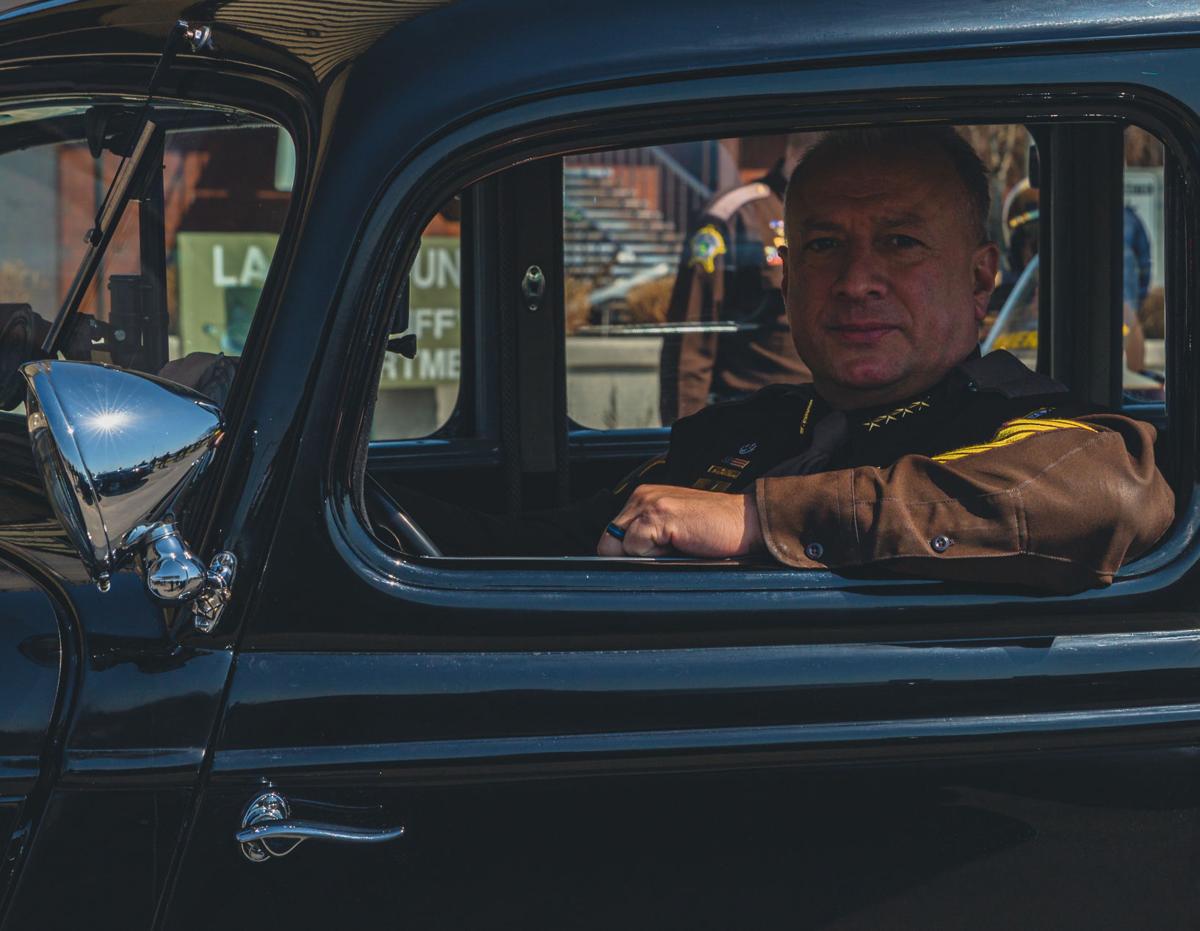 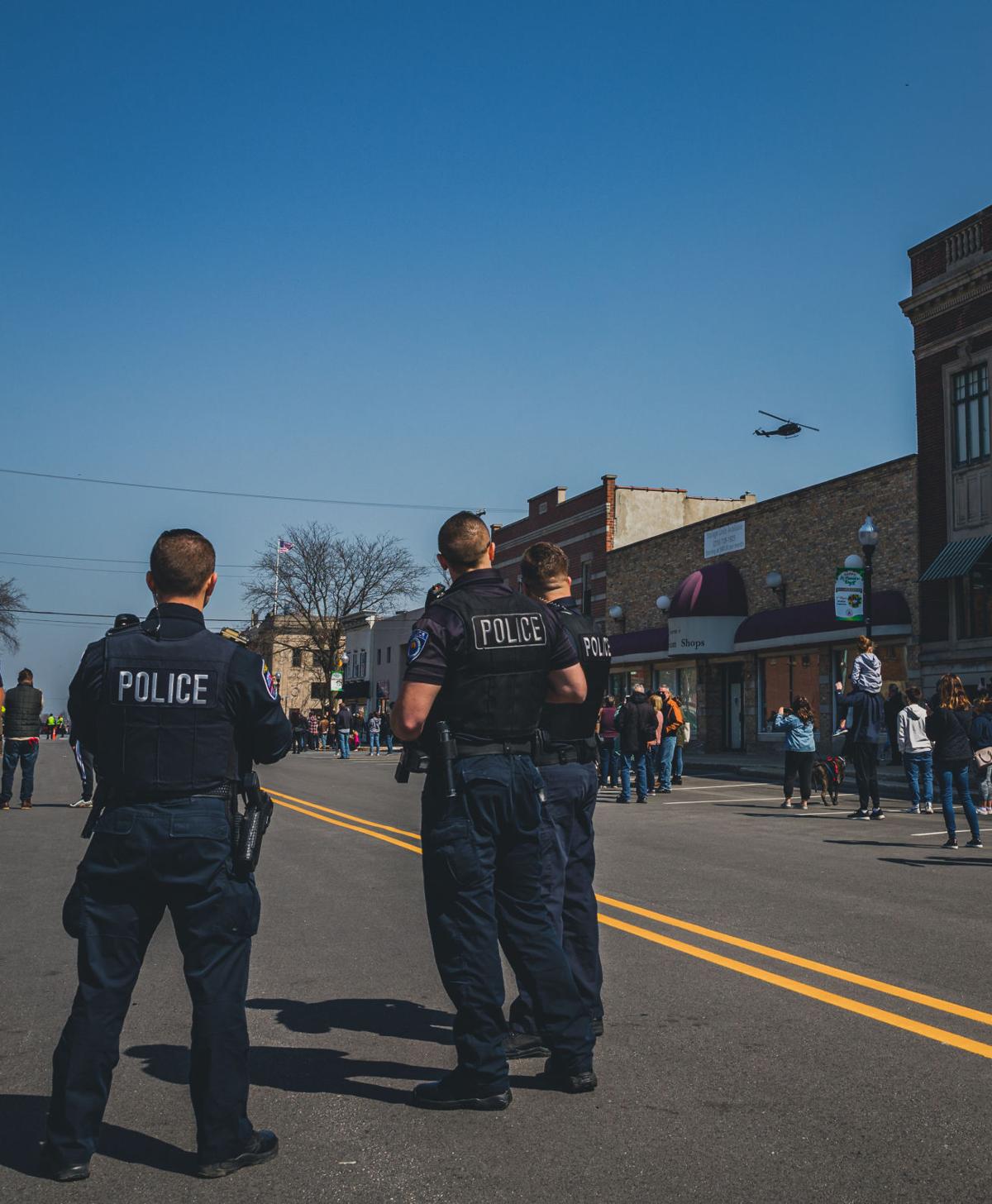 Police officers and civilians stand outside of Lake County Sheriff's House and Jail, as they await the parade led by John Dillinger's escape vehicle.