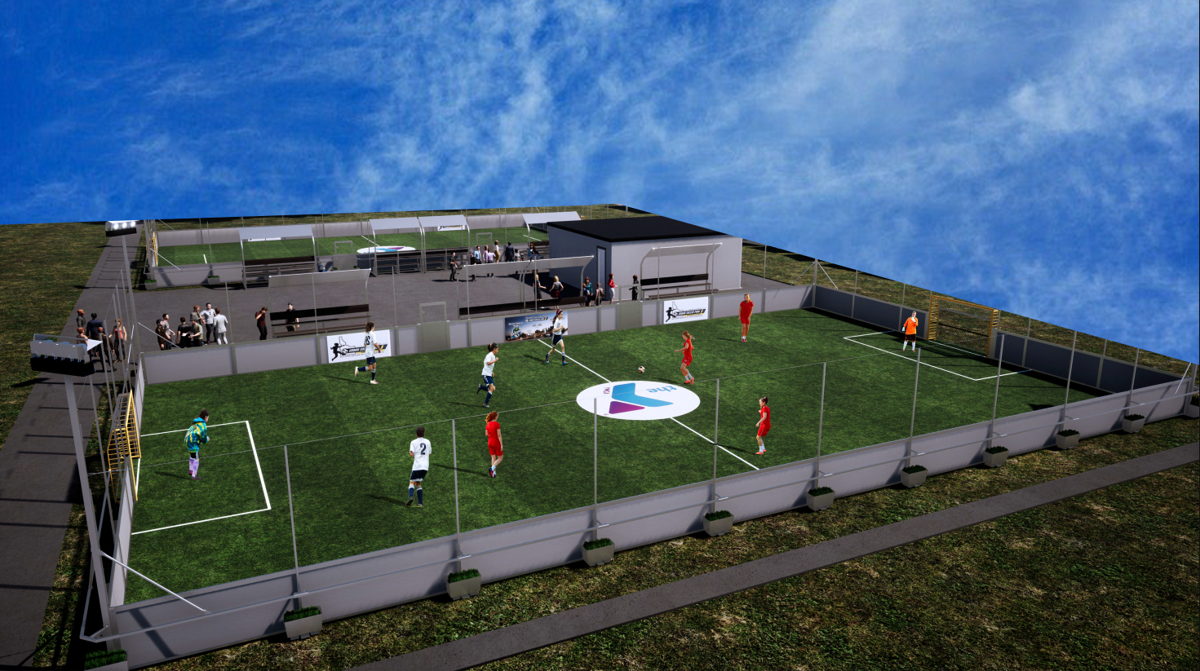 The Crossroads YMCA is proposing to build two soccer fields, as well as another artificial turf field, on the east side of the Dean and Barbara White Southlake YMCA. The two Urban Soccer Park fields will include lighting, speakers for music, a scoreboard and bleachers. 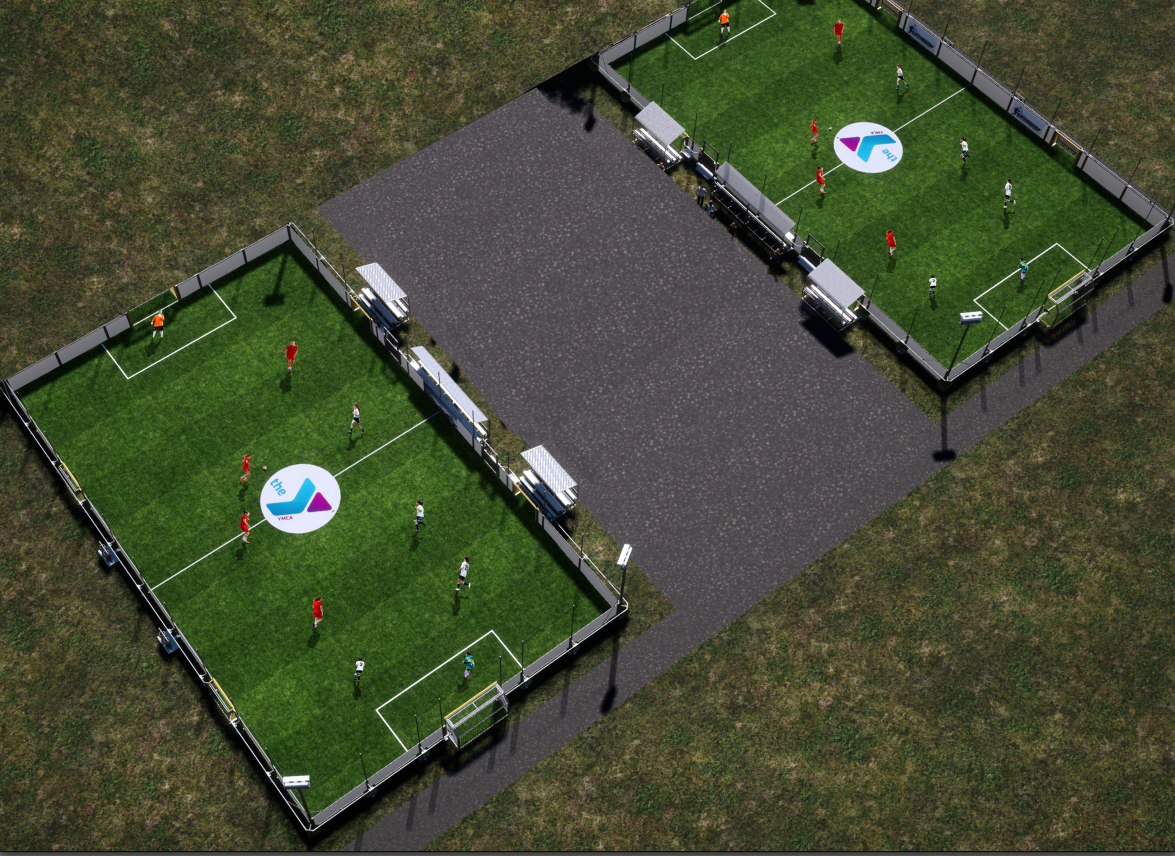 A rendering shows a proposal for two Urban Soccer Park fields on the east side of the Dean and Barbara White Southlake YMCA.

The special use variance was granted by the council during its Monday meeting, and comes after the YMCA's footprint was expanded after its lease with Franciscan Health was updated to include more land.

The council approved the variance 6-0, with Councilwoman Dawn Stokes, D-2nd, abstaining. When asked why she abstained from the vote, Stokes said, "No comment."

The approval comes as the Crossroads YMCA announced last week a roughly $6.5 million expansion is being eyed for the Crown Point Y.

Broken up into two projects, the multimillion-dollar expansion includes adding 2 to 3 acres to the east side of the Southlake YMCA to allow for two, 60-by-100-foot Urban Soccer Park fields, as well as 110 yards of AstroTurf, and replace an existing playground on the south side of the facility with a new Youth Activities Center.

The outdoor expansion, which includes the three artificial turf fields, is slated to cost about $2 million, and the YMCA is eyeing a late fall completion for the project, Buckmaster said previously.

The new youth center is slated to cost between $4 million and $4.5 million, and is set to be complete in the late spring, early summer of 2022, Buckmaster said previously.

The new youth center will likely appear before the Commission later this year, Russ Pozen with DVG Team, Inc., representing the YMCA, said during Monday's meeting.

Also Monday, the council unanimously approved a special use variance to allow a medical clinic to operate in Strack & Van Til at 10851 Broadway.

Jim Wieser, attorney for NorthShore Health Centers, told the Council he has been before boards in St. John and Schererville with a similar ask after Centier Bank moved out of the grocery store.

NorthShore has federally qualified community health clinics in Portage, Merrillville, Lake Station, Hammond, LaPorte and Chesterton, according to its website.

"It's kind of modeled after a very successful program elsewhere in the country, and it's just designed to provide more like wellness care, and vaccines, and COVID checks, and things of that nature," Wieser said. "We're not expecting acute problems there."

Wieser said the clinic will be run by a nurse practitioner, nurse and a staff member, in a less than 600-square-foot space with two small exam rooms and a reception area.

A deputy prosecutor said the state was able to file charges in the case because of "excellent police work" by Detective Sgt. Antwan Jakes and the Lake County/Gary Metro Homicide Unit.

“It shows this community coming together and that Whiting is one big family.”

Portillo's and Olive Garden may be eyeing new locations, while LongHorn Steakhouse ready to start construction in Schererville

A Hammond-based trucking firm is eyeing to relocate its operations to Gary, and residents are concerned about what the relocation could mean for those who live near the proposed development.

Starting Monday, Washington Park will have a full complement of 14 lifeguards. The city is establishing relationships with local groups to recruit lifeguards for future summers.

Police were told two men were at the bar during the early morning hours of Friday when another man, who later sprayed them with Mace, was kicked out.

"Critical race theory is not a topic that we feel belongs in a K-12 classroom," Superintendent Todd Terrill said.

Just like the movies, car 'transforms' into 16-foot robot at Porter County Fair

Further review of the case, including additional documentation, led prosecutors to conclude the state could not prove all four counts against the defendant, court records state.

Munster, Crown Point and Highland ranked among best places in Indiana to retire

Munster, Crown Point, Highland and other Region communities ranked among the best places to retire in Indiana, a new study found.

A city spokesman said one officer is hospitalized in "very serious" condition after being dragged by a vehicle for more than a block and into a Dolton bike shop.

Water main break was worst ever for Valpo

The company had promised to move its headquarters to the Genesis Convention Center and to build a manufacturing plant. No construction work has been done, and the city is suing for breach of contract.

A total of 1,248 Hoosiers tested positive for COVID-19 Tuesday, the highest daily case count since April 29 and a whopping 853% increase compared to the 131 cases tallied in Indiana one month ago.

A historic mansion that once belonged to industrialist and banker A. Murray Turner has gone on the market in Hammond.

The Crown Point Chamber of Commerce is back, and with fresh ambition and new committees, the organization is gearing up to again serve the city's business community.

NorthShore Health Centers is looking to become a mainstay at Strack & Van Til locations in the Region.

During its Monday meeting, the Plan Commission held workshops for two subdivisions — The Willows and The Cottages of Golden Meadow — but didn't take action on either proposal.

After months of work, the Crown Point Clerk-Treasurer's Office reopened its doors earlier this summer with a fresh coat of sunny yellow paint and an expanded footprint.

Crown Point Chief of Staff Greg Falkowski said the first phase of the project is to expand the Veterans Memorial Trail from North Street through the Crown Point Sportsplex to 113th Avenue.

Although open for less than two weeks, an official told The Times the hotel has seen, on average, a 50% occupancy rate, and "on the weekends we've been sold out."

The Crown Point Plan Commission approved 6-0 the site development plan for the addition of three artificial turf fields and sidewalk to the Crown Point YMCA at 100 W. Burrell Drive.

For the seventh year, the Crown Point Fraternal Order of Police Lodge No. 176 will host its annual Hometown Heroes Charity Motorcycle Run, with registration opening at 10 a.m. Sunday at Bulldog Park.

Weiss Entities is pursuing the development that calls for 240 rental units in four-story buildings as well as another 80 units in townhouse-style buildings.

Kindred Hospital Northwest Indiana plans to shut down in downtown Hammond and lay off 110 workers.

WATCH NOW: Bruce Miller sits down to talk with Oscar nominee Diane Warren about her success

Blinken: No concessions to Russia on Ukraine

Blinken: No concessions to Russia on Ukraine

The Crossroads YMCA is proposing to build two soccer fields, as well as another artificial turf field, on the east side of the Dean and Barbara White Southlake YMCA. The two Urban Soccer Park fields will include lighting, speakers for music, a scoreboard and bleachers.

A rendering shows a proposal for two Urban Soccer Park fields on the east side of the Dean and Barbara White Southlake YMCA.