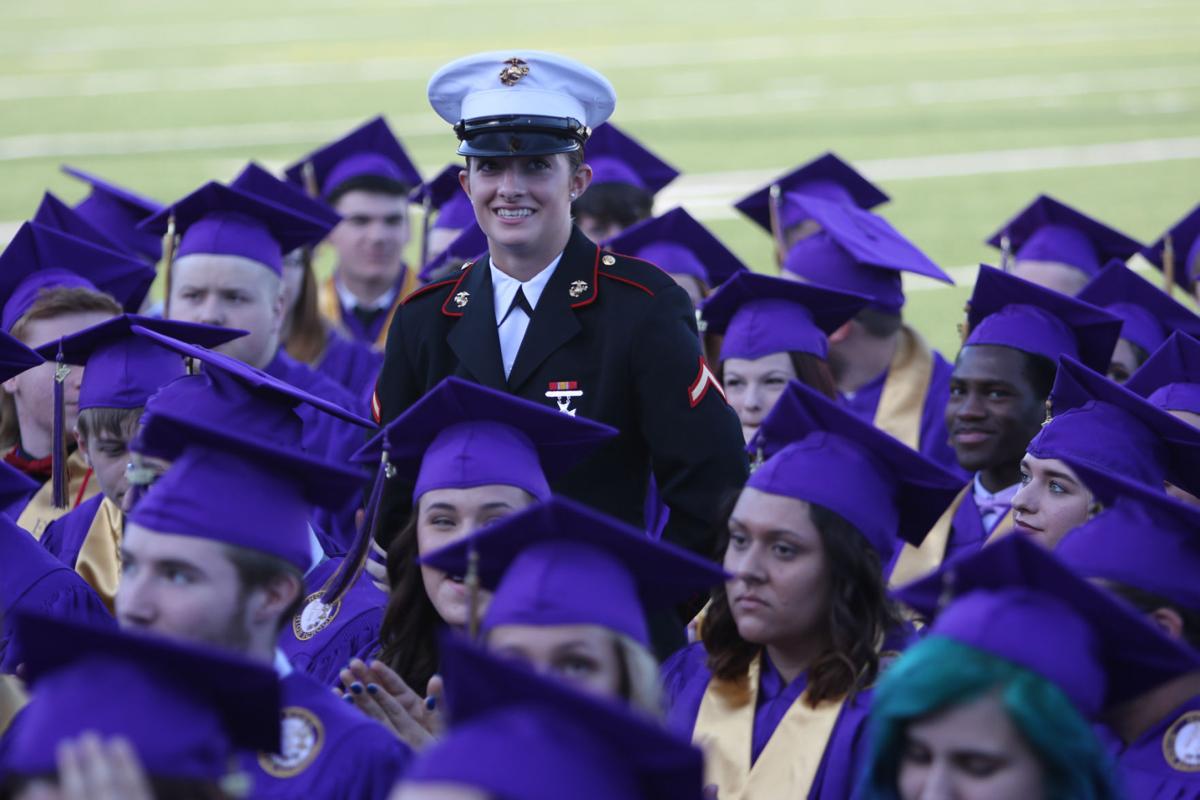 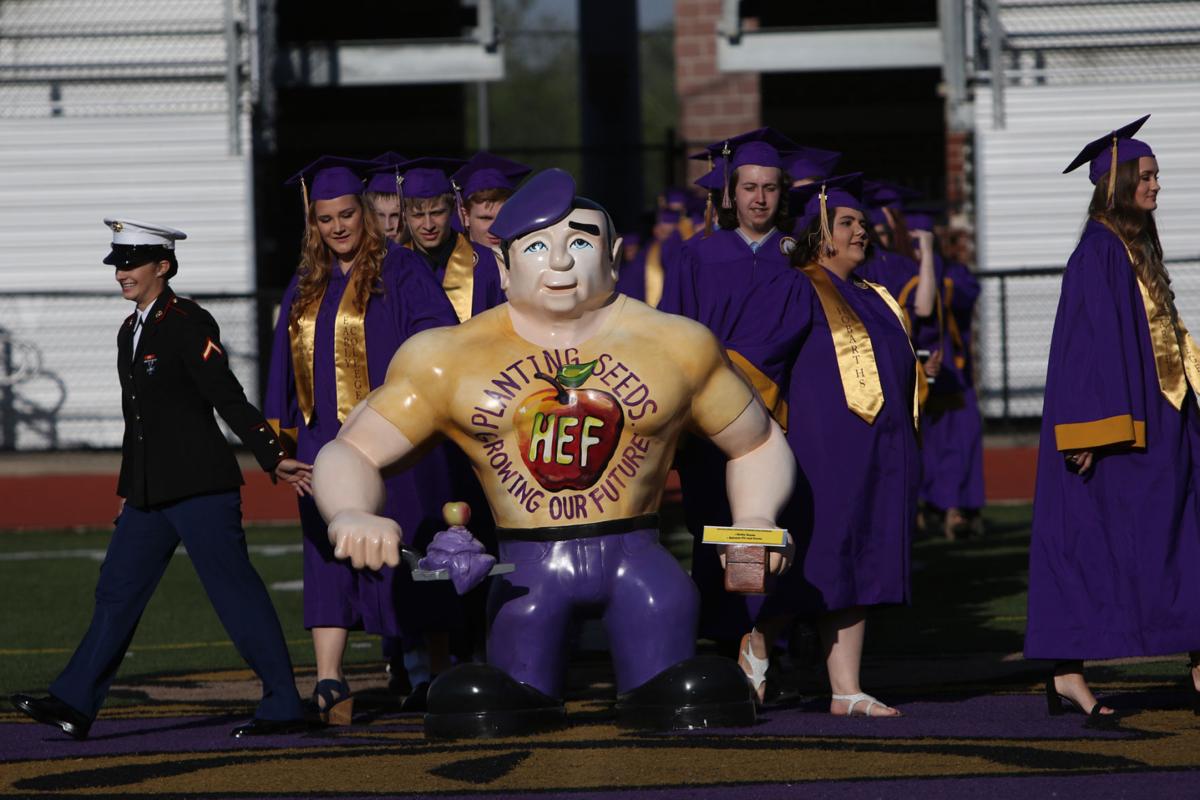 Ana Kritikos graduated midterm and landed just in time for the Hobart High School graduation ceremony June 1. Kritikos is a Private 1st Class Military Occupation Specialist. She is currently serving in Virginia in their specialist class involved with intelligence and started her training in January.

CROWN POINT — Some graduating Crown Point High School seniors, parents and community members are expressing outrage because a graduate was not allowed to walk across the stage Tuesday and accept his diploma while in his military uniform.

However, a Hobart High School graduate who marched in commencement services June 1 wore her military uniform, with the support of school administrators. Marine Private 1st Class Ana Kritikos, an enlisted intelligence specialist who graduated early from Hobart High, wore her uniform to graduation.

Kritikos said Hobart High has supported her 100 percent. She said she arrived home the day of graduation and didn't get a chance to practice with her classmates.

"They have been absolutely amazing. It is OK with the Marines for us to wear our uniforms at high school graduation," Kritikos said. "I know the School Board, the principal and superintendent talked about it and were in agreement that I could wear my Marine uniform."

Hobart schools Superintendent Peggy Buffington said Wednesday that School Board President Terry Butler started the tradition to honor the military at every graduation.

"We recognize audience members and future military in our graduates by having them stand. It is always a very special and patriotic moment where the audience roars with applause," Buffington said.

"This year was especially nice, because Ana Kritikos graduated midterm and landed just in time for the graduation ceremony. We did recognize her and the achievements she has made in the Marines, already. She is a Private 1st Class Military Occupation Specialist. She is currently serving in Virginia in their specialist class involved with intelligence and started her training in January. We are extremely proud of her accomplishments," Buffington said.

Crown Point grad Jacob Dalton Stanley, whose name was listed in the graduation program, was turned away when he went to the graduation ceremony Tuesday night at the Star Plaza Theatre in his Marine dress blues. Nor did school officials read his name among the graduates.

Stanley, who graduated in December and joined the U.S. Marines, completed boot camp Friday and flew home for his high school graduation. He practiced with his classmates during the day and was reportedly told by high school Principal Chip Pettit that he would not be able to wear his uniform during commencement.

Stanley reportedly received numerous calls and texts from friends who told him he should be proud of his accomplishments, and he should wear his military uniform.

Stanley declined to be interviewed for the story.

Pettit responded to The Times by email, saying the tradition at Crown Point High School has been for all students voluntarily participating in the graduation ceremony to wear a standard graduation cap and gown, and individual students are recognized for academic achievement, honor society membership and military service by wearing stoles or chords over their gowns.

"This practice has served us well as it has allowed the class to show unity by dressing the same, but also allowing for individual accomplishments to be recognized by wearing stoles and chords," he said. "Last night, at our 135th graduation ceremony, students in all of the aforementioned groups wore their gowns, stoles and chords with great pride.

"We have continued wearing the traditional gown as this is the last formal event of the year and a celebration of the time our graduating seniors have spent at Crown Point High School. This tradition is not intended to be disrespectful to students, parents, or our community, but as a source of pride for our students. It is also not intended to be disrespectful to our students choosing to serve in the military, our active duty servicemen and women and our veterans. We are forever grateful for the sacrifices that they make on a daily basis for our freedom," Pettit said.

Although Stanley didn't want to comment, his classmates, who were turning in their caps and gowns Wednesday at the high school, were not so reticent.

Crown Point grad Leann Tustison said the situation was "absolutely ridiculous. He's in the military putting his life on the line for us," she said.

"If his achievement is joining the armed forces, he should have been able to do that. The students were outraged. There were some students who were going to walk in solidarity with Jake. It was a disgrace," Tustison said.

Gabriela Risteski said Stanley accomplished a great deal in a short period of time, and "he had the right to walk across the stage and accept his diploma."

Jessica Janda said the nation doesn't show enough respect for the people who serve our country.

"It was despicable that he wasn't allowed to wear his uniform. We should be proud of that as Americans. He should have been able to wear his military uniform," she said.

Rachel Melvin said Stanley is representing the United States. Michael Kitchen said he heard about the situation, and agrees with other students who said Stanley should have been able to wear his Marine dress blues for graduation.

Family members, who did not want to be named, called the situation a "disgrace." One family member, who was at the graduation, said there was one student who wore shorts and gym shoes, and another student who wore a red turban symbolizing his religious views.

There is nothing in the Crown Point Community School Corp. bylaws that addresses whether U.S. military uniforms can be worn at graduation.

"If he wore his uniform, it would be something we would consider an honor," Disney said Wednesday.

"He did basic training last summer, and it was a unique situation because it went into the football season so he missed part of the early practices," Disney said.

"We were able to credit the basic training because I'm sure that's much more difficult than football. He received credit and was able to play. If he wants to wear his uniform to graduation, he can. I can't name all of the graduations that I've been to, but I've seen it before where a student has joined the military and wore their uniform to graduation. I think it's an honor," Disney said.

A spokesman for the U.S. Marine Corps. said the military does not get involved with the dress code for graduations.

"The Marine Corps does not dictate what specific high schoolers can or cannot graduate in," said Maj. Clark Carpenter, with the U.S. Marine Corps. "That decision is up to school leadership."

UPDATE: Man dies after shooting at his Calumet City home

CALUMET CITY — A man died at a hospital Wednesday after a shooting at his home in the 1300 block of Hirsch Avenue, according to the Lake Count…

A sleepy semi driver took a ramp from northbound Interstate 65 to Ind. 2 too fast early Thursday, causing the truck to roll and spilling coils…

Young men and women who choose pathways in life including military service should be proud of those decisions.

CROWN POINT — Beginning in 2017, students graduating from Crown Point High School earned a distinction normally associated with colleges and u…

We are so #RegionProud of NWI students moving to the next phase of their lives. See all the fun from Region commencements here.

The Times' Doug Ross found these old high school graduation programs recently. Have any others you want to share? Contact him at doug.ross@nwi.com.

Ana Kritikos graduated midterm and landed just in time for the Hobart High School graduation ceremony June 1. Kritikos is a Private 1st Class Military Occupation Specialist. She is currently serving in Virginia in their specialist class involved with intelligence and started her training in January.