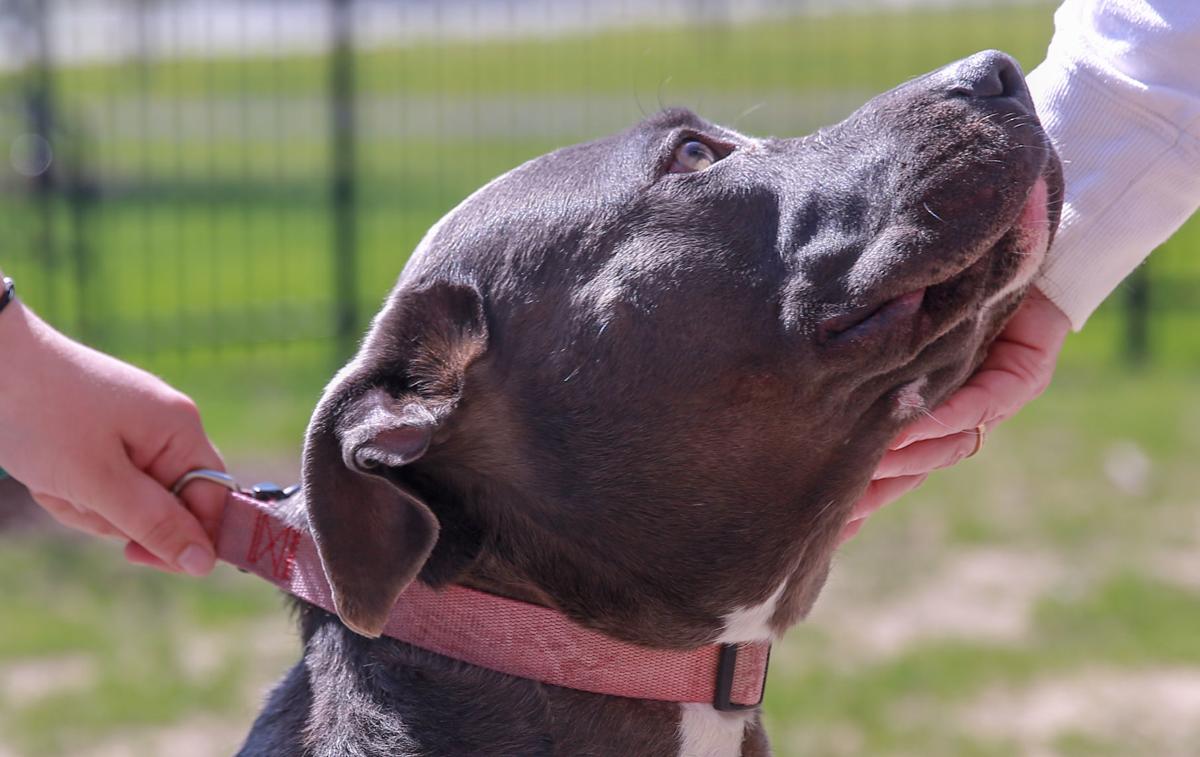 Bella is a pit bull housed at the Porter County Animal Shelter. 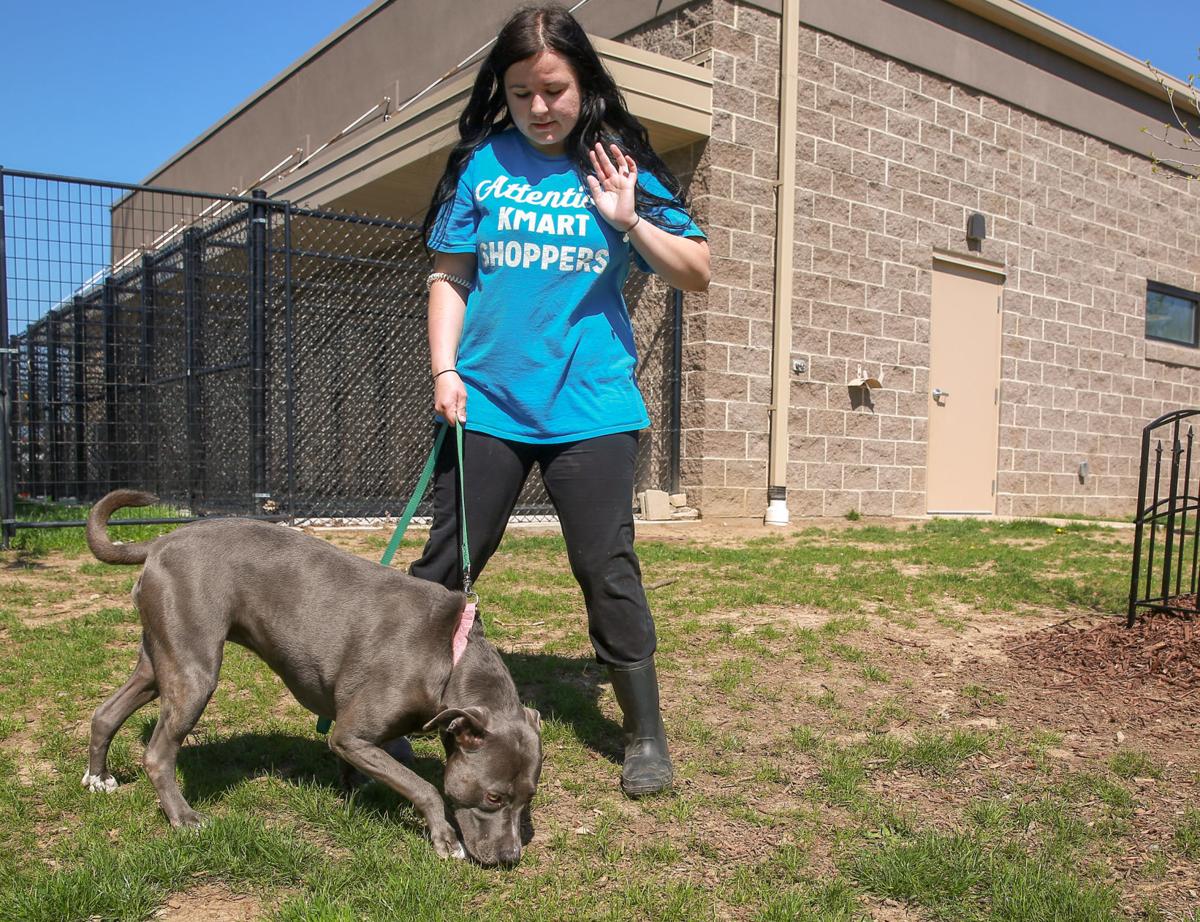 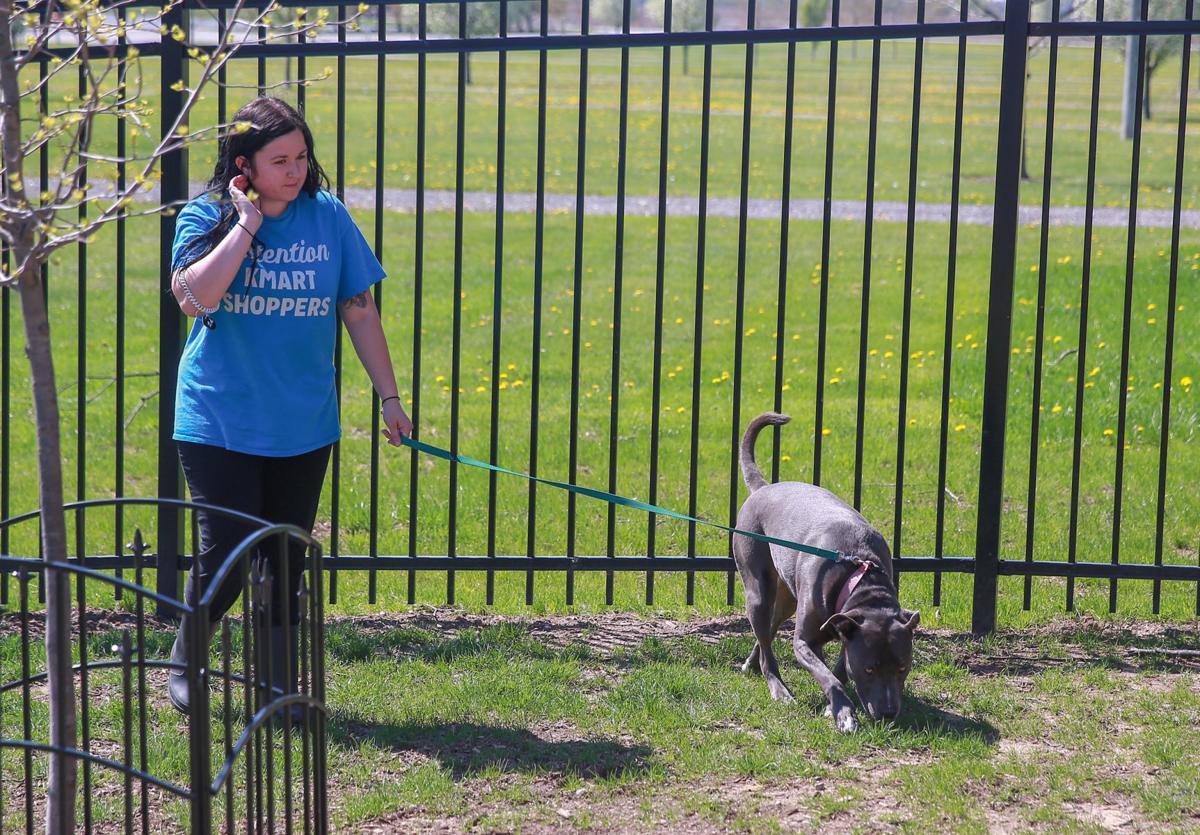 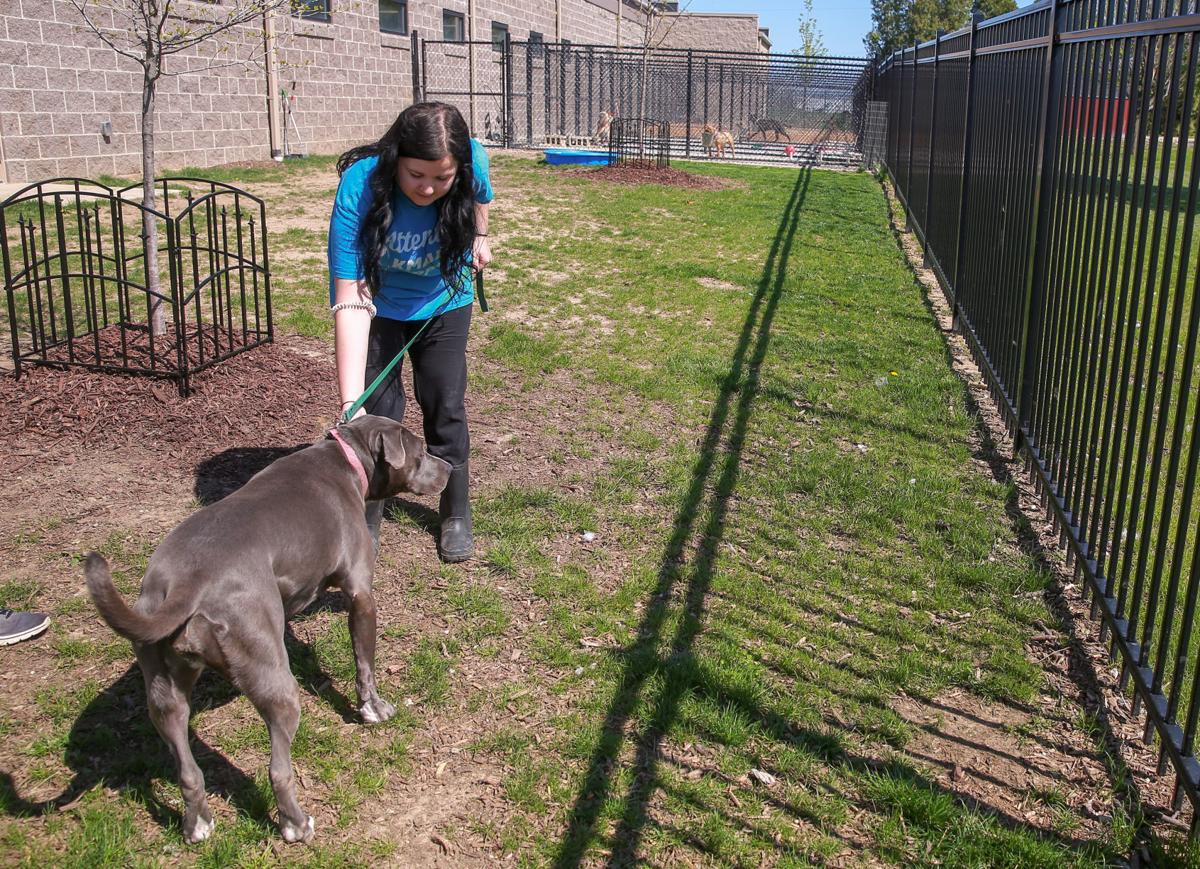 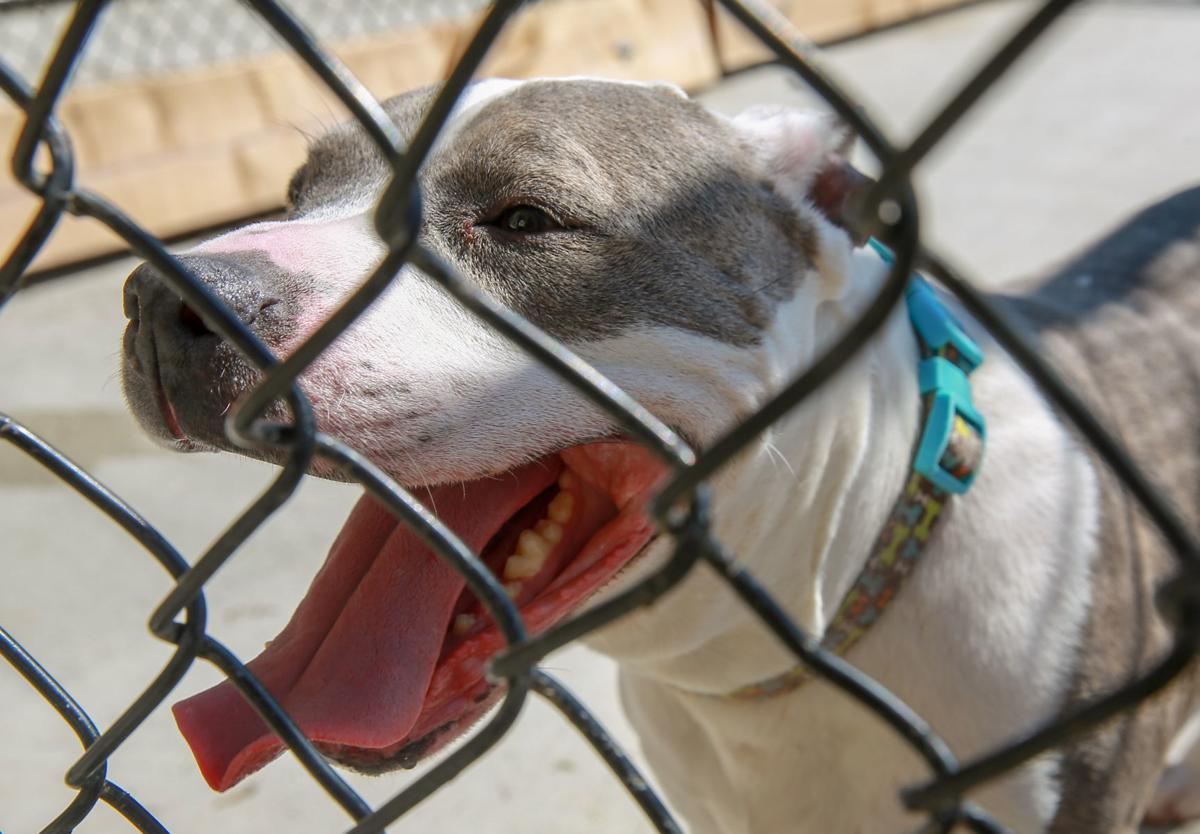 Jayda is a pit bull housed at the Porter County Animal Shelter. 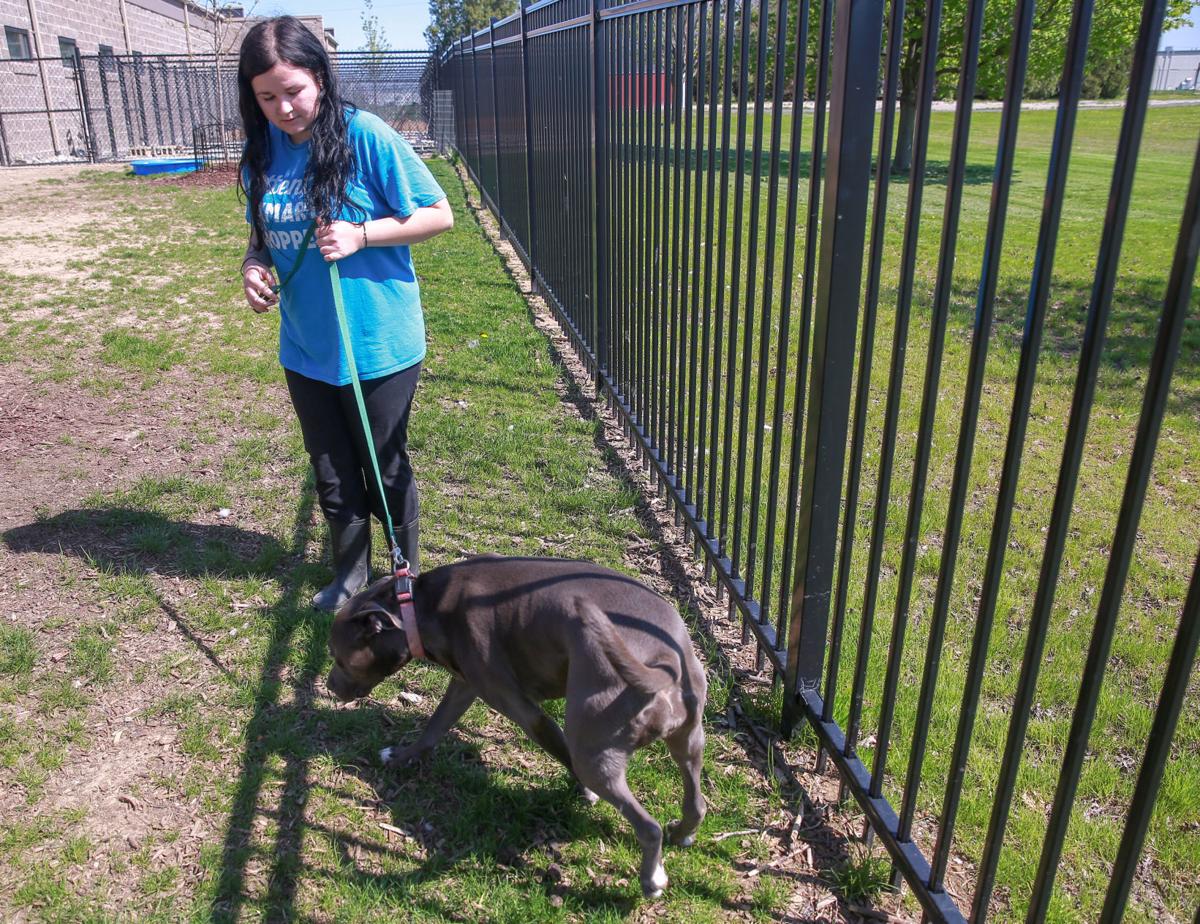 Kennel technician Alexis Oar takes Bella on a walk outside at the Porter County Animal Shelter.

Merrillville City Councilwoman Roxanne LaMarca said she is uncomfortable with a town ordinance singling out American pit bull terriers and subjecting them to strict regulations.

"All pit bulls need to be registered with the town as a dangerous animal whether they have been deemed dangerous or not," she said.

The ordinance also places a limit of just one pit bull per home, calls for 6-foot security fences and the use of muzzles, and requires the dog owners to have insurance coverage of at least $300,000 to cover any injury caused by the animal.

While this type of breed-specific legislation continues to be the subject of intense debate across the country, Jenny Webber, a former chief operating officer at Humane Indiana in Munster, is proposing what she believes will be a more effective approach at addressing the problem of aggressive dogs, as well as the many other pet-related challenges facing the Region.

She is attempting to form a coalition of representatives from all the shelters, animal controls and rescues from the 1st Congressional District with the three-prong goal of networking and sharing resources, taking a more comprehensive approach to local lawmaking and attacking the companion animal problems at their core by improving spay and neuter efforts.

"If we reduce the homeless (pet) population, we'll reduce bites," she said.

The various entities targeted by the new Indiana Coalition of Animal Rescue Efforts are spending millions of dollars that could be better put to use in a combined and comprehensive manner, Webber said.

DogsBite.org, of Austin, Texas, claims pit bulls are responsible for 66 percent of the 433 people in this country who have died from dog attacks between 2005 and 2017.

"It's reasonable for local governments to place restrictions on a class of dogs that statistically cause more harm to humans, especially children, when they attack," said Colleen Lynn, the group's founder.

"There is no scientific test to determine a 'good' pit bull from one that will attack. We simply know that when a pit bull chooses to attack, it will attack in a manner designed to maximize damage."

Numerous groups, including the Humane Society of the United States and the American Society for the Prevention of Cruelty to Animals, have taken a stand against breed-specific legislation, calling them ineffective.

"The ASPCA instead favors effective enforcement of a combination of breed-neutral laws that hold reckless dog guardians accountable for their dogs’ aggressive behavior," the group said.

Freida White, executive director of the Humane Society of Northwest Indiana in Gary, said she understands both sides of the debate, including the concerns that have resulted in various forms of controls placed on pit bulls in communities across the Region.

She has seen her share of both friendly and unfriendly pit bulls and believes inbreeding is part of the problem with the aggressive dogs. Most of attacks also seem to be coming from intact male dogs between ages 2 and 3, which fuels the argument for more aggressive spay and neutering efforts, White said.

She attempts to head off problems by doing background checks on anyone interested in adopting a pit bull and will not adopt out any dog — no matter the breed — that is larger than the youngest child in the house.

As a grandmother, she questioned the judgment of those willing to place a new and largely unknown dog with small children.

"I get their point," White said of community leaders attempting to respond to the problem. "But I also think they're putting a death wish on pit bulls."

Targeting behavior rather than breed

Portage City Councilwoman Sue Lynch, D-at-large, said the city was faced with this issue a few years ago, but it ultimately decided not to take any action targeting pit bulls or any other specific dog breed.

A large number of pit bulls are sitting at shelters unable to get homes because they have been demonized by their breed alone, she said. This has happened with other breeds as well over the years, including Doberman pinschers and Rottweilers.

"I think your dog is what you make it to be," Lynch said.

While there was never any intention to pursue breed-specific legislation, pit bull owners came out in large numbers and were circling City Hall with their animals during one meeting, he said.

The city opted to strengthen its laws against all types of aggressive dogs instead, said Town Councilman Jerry Herzog, D-1st.

"It has been working for us," he said.

LaMarca said the Merrillville Town Council is going back to the drawing board soon to consider possible amendments to its ordinance. The town's current approach has hindered compliance, she said, with only 35 people registering their dogs.

"I would say we have a larger pit community in Merrillville," she said.

LaMarca, who operates an in-home pet care business, said she would like to see tough restrictions in place, but only for dogs that are shown to be a problem or aggressive.

Like most dogs, Moey loves spending time in the back yard, romping around and basking in the sun.

HAMMOND — Whiting is a small city of 5,000 residents, but its location and lots of forward thinking have changed the municipality into a touri…

Three or four times a week, Valparaiso resident Jeff Lindemer chooses one of the available dogs from the local Lakeshore PAWS dog rescue and h…

CROWN POINT — A local woman is hoping to get Katie, her 12-pound Schnauzer, back home as early as this weekend after being attacked by a large…

VALPARAISO — The defense is arguing that the wrong person has been charged with last month's beating deaths of two pug dogs in rural Porter County.

Bella is a pit bull housed at the Porter County Animal Shelter.

Jayda is a pit bull housed at the Porter County Animal Shelter.

Kennel technician Alexis Oar takes Bella on a walk outside at the Porter County Animal Shelter.