Attorney General Todd Rokita seems to be taking another shot at achieving national notoriety by mixing the hot-button issues of race and education.

Earlier this week, the Hoosier Republican issued an official opinion declaring Black Lives Matter (BLM) to be a "political organization," contrary to a July 2020 memo by the U.S. Office of Special Counsel under Republican President Donald Trump that concluded BLM primarily was engaged in issue advocacy and not focused on electing candidates to office.

As a result, Rokita said school districts have the authority to bar "BLM materials, lessons or indoctrinations" from their classrooms, hallways, and facilities generally. And Rokita is, in fact, encouraging school district leaders to "ensure classrooms remain politically neutral," as he's confident many already are.

"The Indiana Office of the Attorney General understands most Indiana teachers are educators because they maintain a passion for teaching children and do not wish to use classroom time as an indoctrination tool to push their political, religious, or other social views on the youth in their care," Rokita said.

Rokita so far has not established a school poster police and did not specify what may happen if teachers and school districts ignore his official opinion, which has no force of law but may be taken into consideration by an Indiana court if an on-point legal issue arises.

He also did not target his official opinion to Hoosier parents as he did in July when Rokita spontaneously issued a 16-page "Parents Bill of Rights" that purports to detail the legal rights of Indiana parents to participate in their child's education.

Rokita alleged in that document that critical race theory (CRT) is "consistently being backdoored into Indiana classrooms, contrary to state and federal law," and he urged Hoosier parents to confront school board members whenever they believe "Marxist ideologies" that seek to "abolish individual rights and redistribute wealth" are being taught in schools.

He followed a similar pattern in August when Rokita launched an "investigation" into possible Chinese Communist infiltration of Valparaiso University that resulted in Valpo shutting its Confucius Institute cultural exchange and Chinese language programs.

In addition, Rokita claims to still be investigating whether nine, mostly black, civil rights leaders conspired with Facebook head Mark Zuckerberg during a November 2019 dinner to censor conservative viewpoints online ahead of the 2020 presidential election. 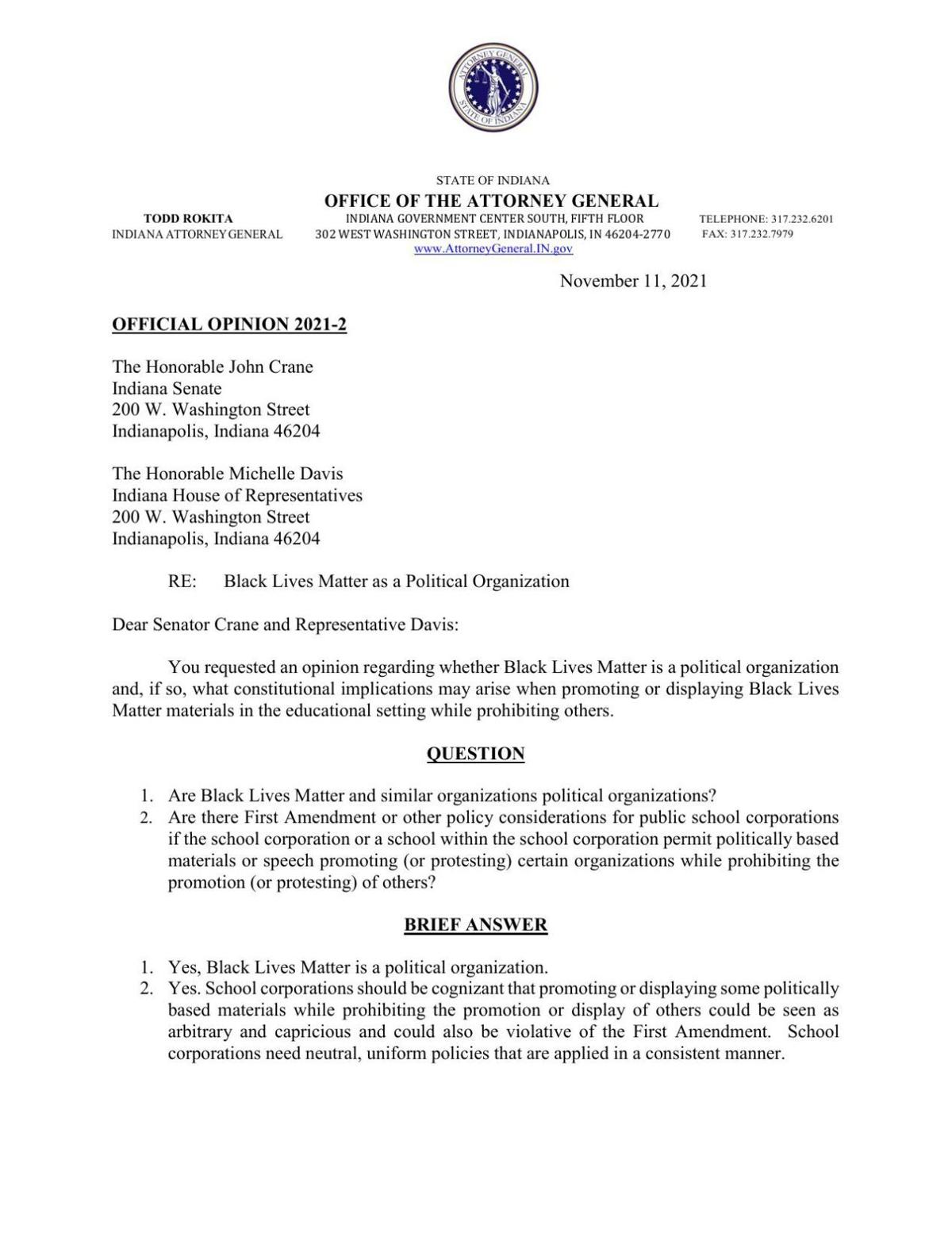 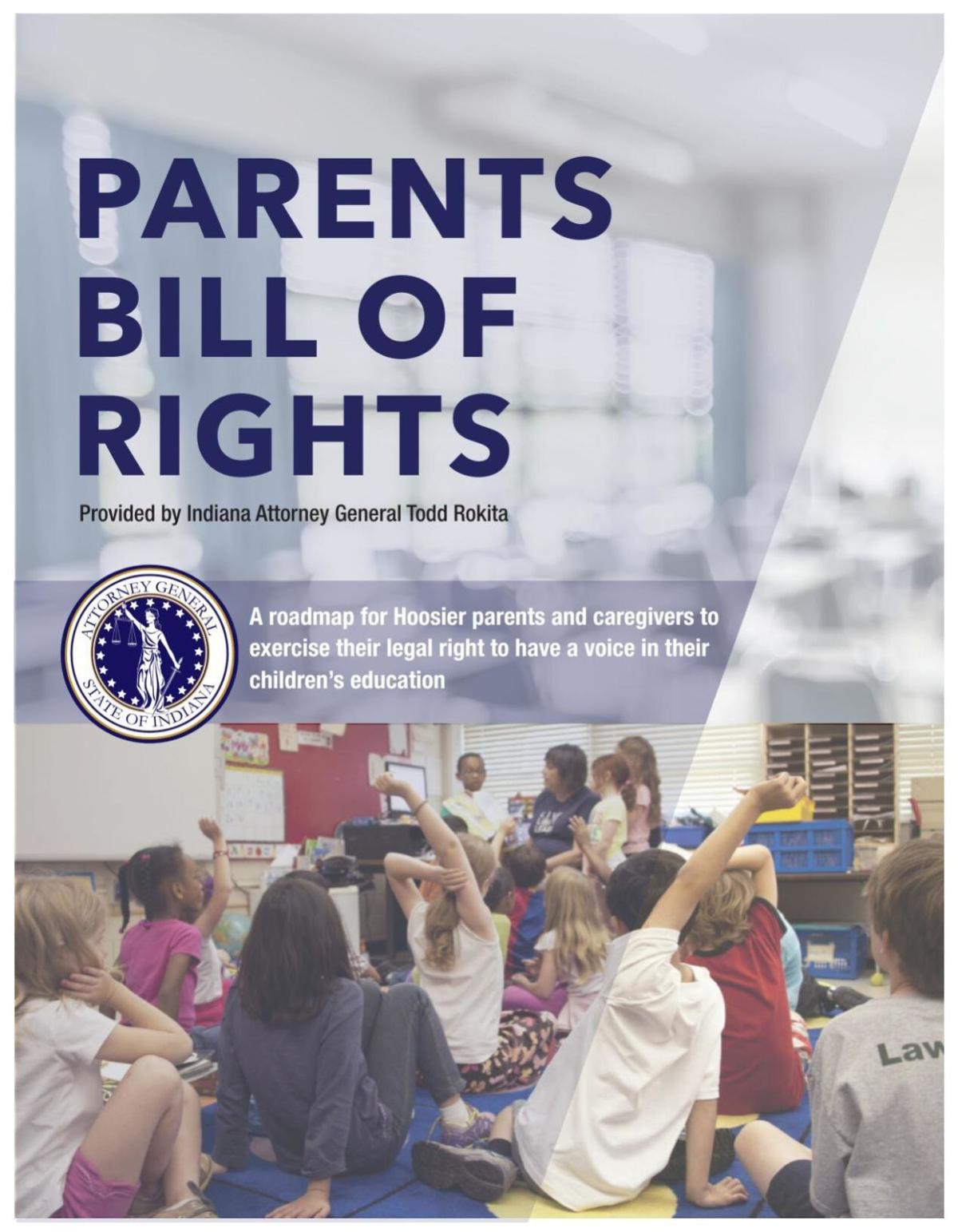 Attorney General Todd Rokita declared Thursday that the COVID-19 prevention policies of President Joe Biden are an "egregious" and "insidious" overreach, and a "direct attack on state's rights."

Attorney General Todd Rokita is asking the U.S. Supreme Court to strike down a federal regulation barring possession of a firearm accessory used in the deadliest mass shooting in American history.

Top Hoosier Republicans are pushing back on Democratic President Joe Biden's efforts to bring a close to the COVID-19 pandemic by boosting vaccination rates across the country.

Indiana Attorney General Todd Rokita is vowing to use "every tool at our disposal" to find out if the Confucius Institute at Valparaiso University is secretly a front for the Chinese Communist Party.

A federal judge has halted the enforcement of a new Indiana statute mandating doctors tell patients pill-induced abortions possibly can be "reversed."

Republican Attorney General Todd Rokita tweeted from his campaign account on Valentine’s Day an image of Trump with the message: “You stole my heart like a 2020 election.”

Republican Todd Rokita is vowing to use his new position as Indiana attorney general to take on major technology companies, in part to vindicate President Donald Trump.

The Indiana State Teachers Association believes changes to education wrought by COVID-19 require teachers be given an opportunity to bargain over working conditions, in addition to wages and benefits.

The legislation authorizes Aberdeen to join Valparaiso even though there are other homes between Aberdeen and the current Valparaiso city limits that would not be included in any annexation.