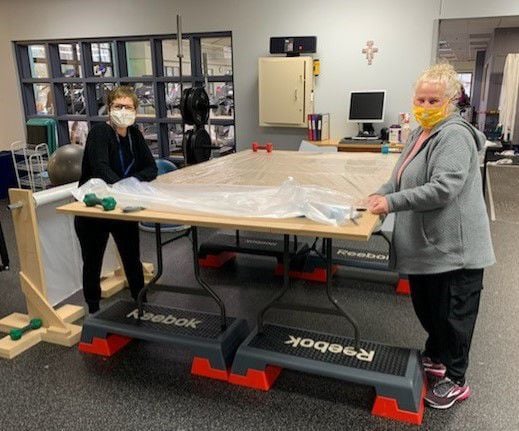 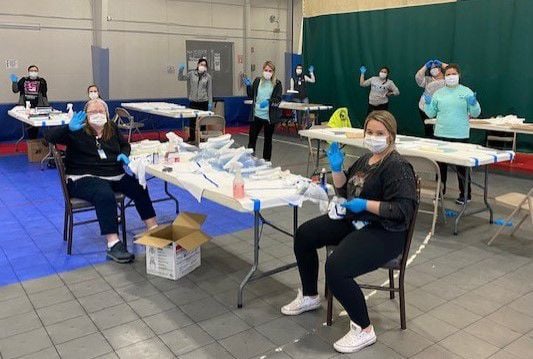 Coworkers and staff across Franciscan Health Fitness Centers have pulled together, with the support of Tonn and Blank Construction, to produce much needed PPE (Personal Protection Equipment) for Franciscan Health staff to use during this period of short supply.

Workstations were set up in both the Chesterton and Schererville Clubs with social distancing measures in place.

The first project, assembling approximately 7,000 face shields to be used by front-line caregivers, was accomplished in just four days. Tonn and Blank made prototypes and tutorials to train the health club staff on how to make the face shields. The shields have been distributed to various local Franciscan Health locations to aid the doctors, nurses, respiratory therapists, other clinicians and staff.

Making isolation gowns for the Franciscan Health locations was the next project. Over 5,000 gowns toward a goal of 10,000, have been produced so far. The two locations have a daily shift consisting of 20-30 coworkers who are stationed throughout the Clubs. Made of a thin plastic sheeting, the gowns are cut, taped and ironed during the manufacturing process.

In addition to these projects, Franciscan Health Fitness Centers assisted Able Paper and Janitorial with the donation of 205 boxes of medical grade gloves. They were recently delivered to Franciscan Health Munster.

Due to state guidelines surrounding the “stay-at-home" order, Franciscan Health Fitness Centers services have been temporaily suspended. In support of their mission, Fitness Center staff was redeployed to help in these efforts for Franciscan.

“The fitness center staff was so excited for the opportunity to do their part to keep their front-line clinical peers as safe and protected as possible. Being able to manufacture PPE for our Franciscan health care heroes has truly given our work purpose beyond measure,” said Carrie Fleming, Manager, Fitness Center Schererville. “We are honored to assist in any way we can, all hands-on deck. Our mission is alive and well at Franciscan Health Fitness Centers.”

They found medics attempting to revive a 45-year-old Griffith woman, who had no pulse and was not breathing on her own, police said.

Both individuals are believed to be in the Porter County area, likely staying with friends or family, police said.

One resident suffered minor injuries and there were no fatalities among people or pets, firefighters said.

Man shot while meeting up for planned fight, police say

A man shot late Tuesday told police he had met up with someone to fight, and when that person arrived, someone else showed up with them and began firing shots, an official said.

Erin Sowa admitted in her plea agreement she shot Anthony Syler, 27, of Gary, in the head "in sudden heat" April 8, 2020, in an alley east of the 700 block of Cleveland Street.

The 16-year-old girl and two other teens, all from Chicago, are accused of leading state and city police on a nearly 45-mile chase into Northwest Indiana.