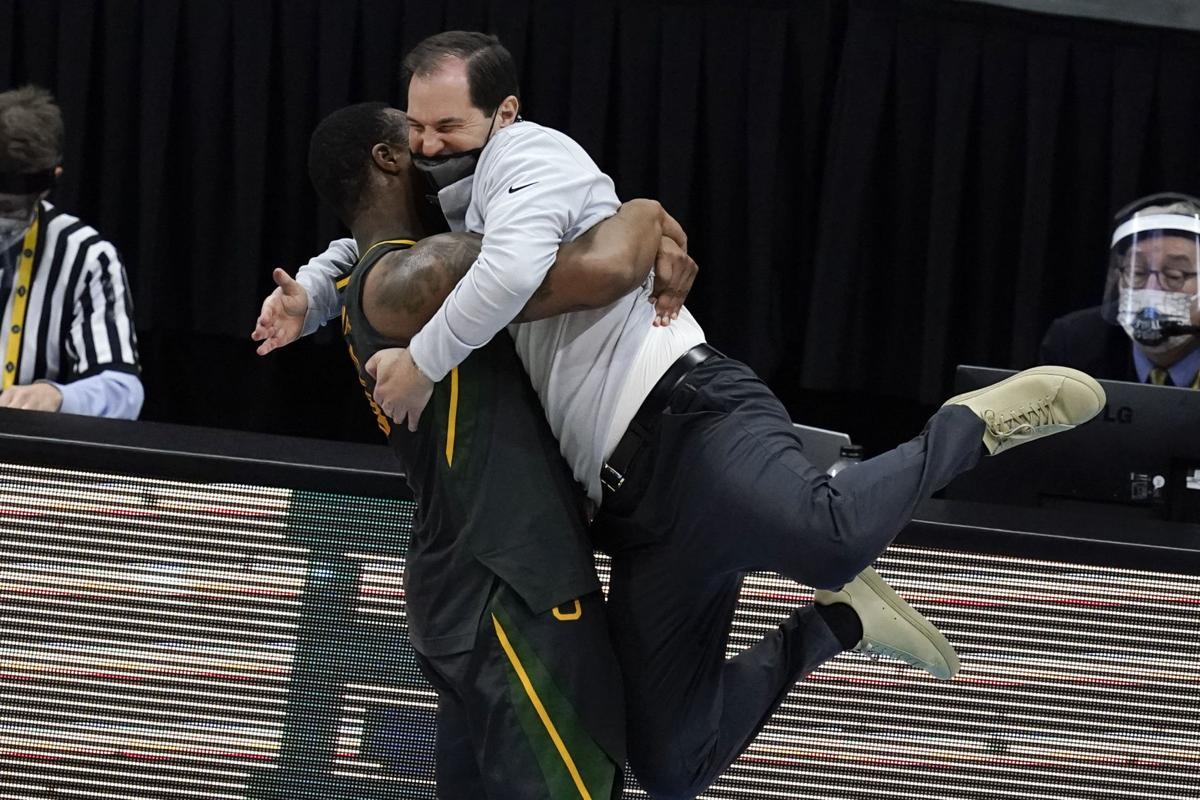 Baylor head coach Scott Drew gets a hug from Mark Vital at the end of the NCAA Tournament championship game against Gonzaga on Monday at Lucas Oil Stadium in Indianapolis. Baylor won 86-70. 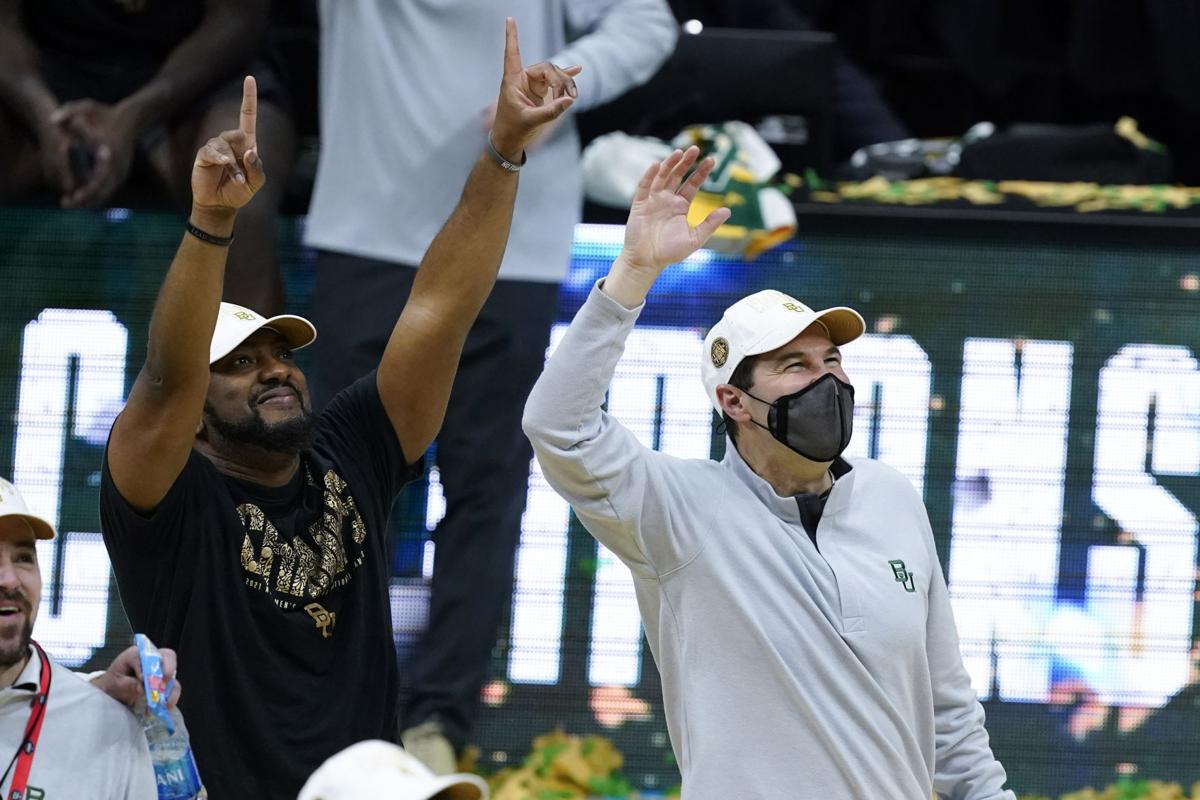 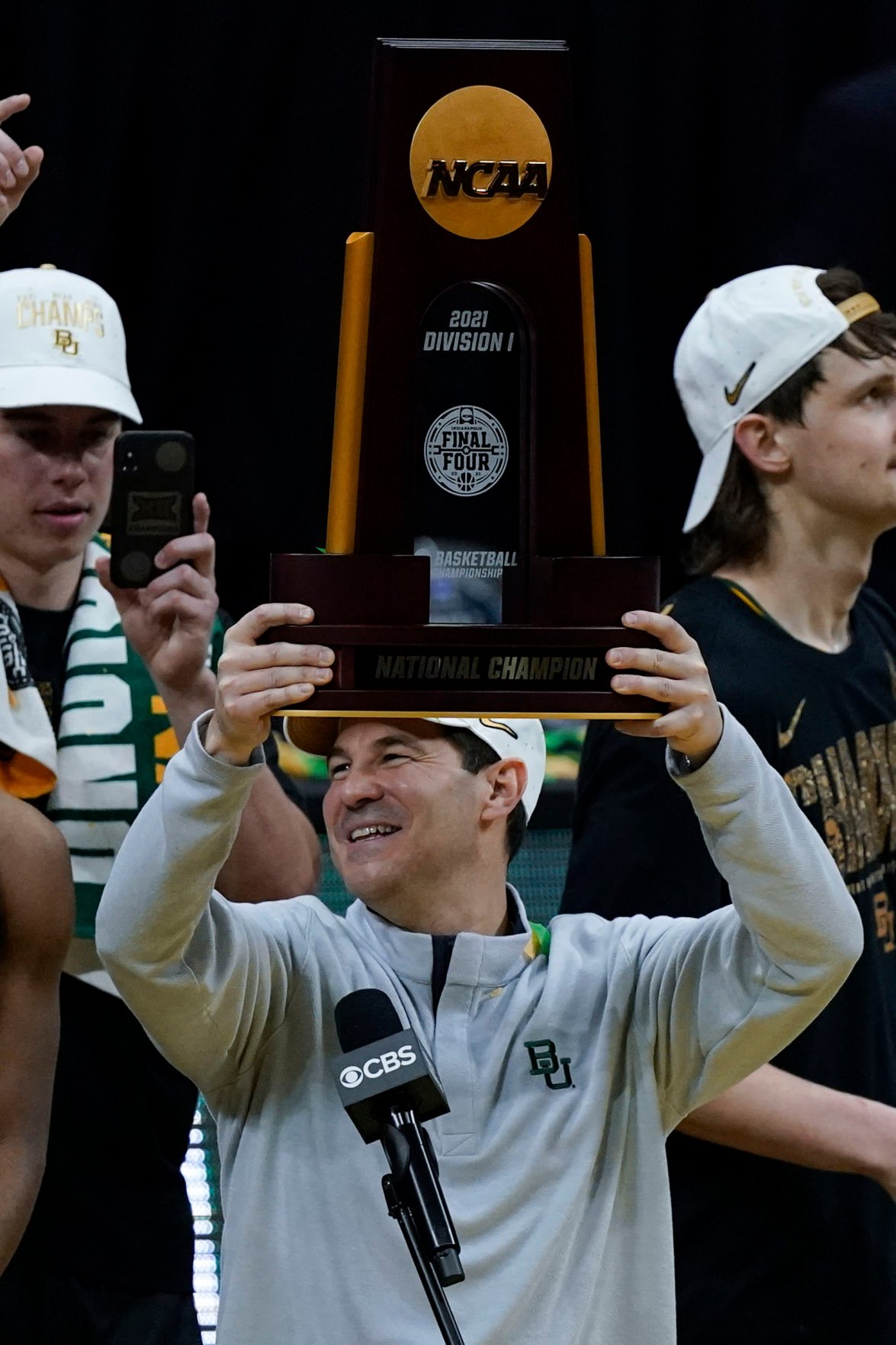 Baylor head coach Scott Drew holds the trophy after the NCAA championship game against Gonzaga on Monday at Lucas Oil Stadium in Indianapolis. 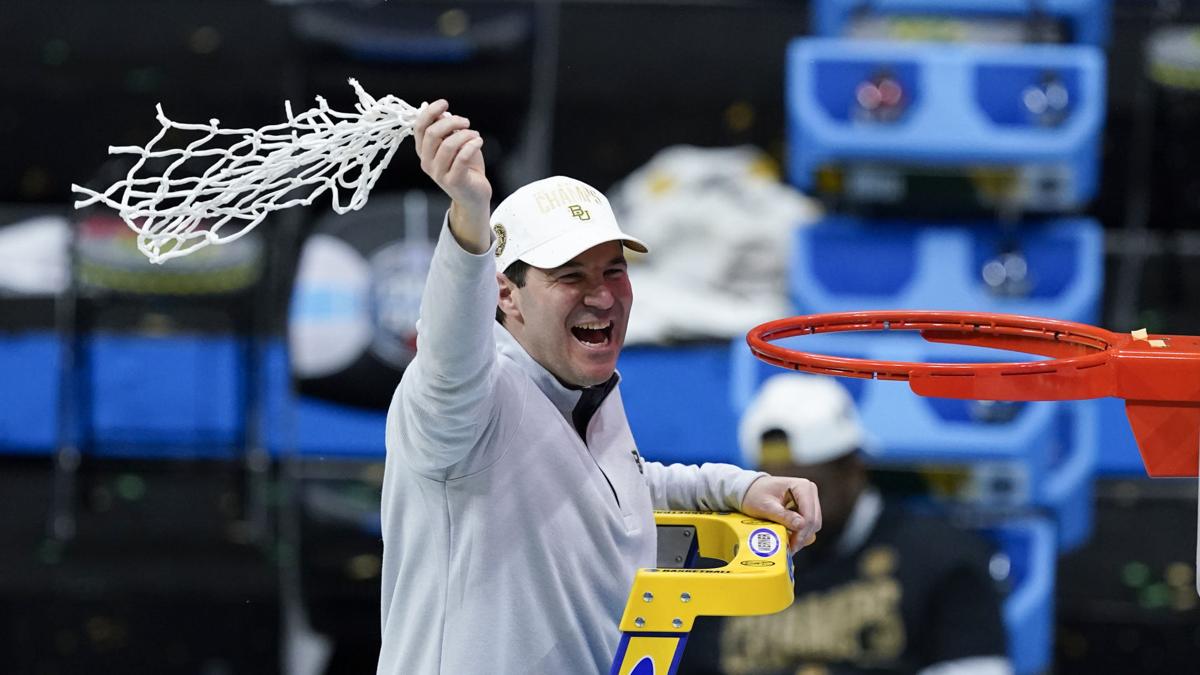 Baylor head coach Scott Drew cuts down the net Monday after leading his team to the NCAA Tournament championship against Gonzaga at Lucas Oil Stadium in Indianapolis.

INDIANAPOLIS — As Scott Drew ascended a ladder to cut down the championship net Monday night, the national spotlight descended upon the Drew family in the 100 level at Lucas Oil Stadium.

It was a storybook finish to the 2021 NCAA Tournament. The son who was in the background of Homer and Bryce’s signature Big Dance moment in 1998 was now in full focus for the rest of the world to see. Reporters asked father and brother for their thoughts on Scott’s 18-year journey to turn Baylor into a program that was on the brink of disaster to one that was on top of the world.

For every snip of the net by Scott, there was a Jumbotron camera shot of a beaming Homer, a stoic Janet or a downright giddy Bryce. Sister Dana was on hand with her husband, Grand Canyon assistant coach Casey Shaw. Scott’s wife, Kelly, was in the stands as well as all of the Drew grandchildren.

It was a special moment for the family, and it only told one part of the story.

What the Jumbotron didn’t catch was the group of Scott Drew supporters in the 200-level section. The high school classmates and college fraternity brothers who came from all corners of the country for their friend's special moment. When the final buzzer sounded, there was nary a dry eye in the group.

“We’ve been cheering him on the whole way,” Daniel Kozlowski said. “We’ve supported him just as he’s supported us. Getting to the Final Four was the culmination of 20 years of hard work that we’ve all admired him for. We all felt vested in some small way because of all the emotional support we’ve all had for one another.”

Kozlowski, who is known in the group as “Koz,” flew in from Colorado on Sunday night. The 1990 Valparaiso High graduate has known Scott dating back to their time in high school. As Scott was getting his coaching career started under Homer at Valparaiso in the early 1990s, Kozlowski was getting his own business ventures off the ground in Valpo.

“We were doing very different things, but we were both learning what it took to be successful, and we were supporting each other,” Kozlowski said. “We had career parallels, and it always came back to working hard and having that drive to be successful. We could see it then.”

Scott knew being a successful head coach took all the hard work that he could muster, and he also knew it would take a great deal of optimism. When he took over Valparaiso in spring 2002, he proudly declared that a mid-major would get to the Final Four and he fully intended that program to be Valpo. Those plans were put on hold a year later when he took over a scandal-ridden Baylor program that was reeling from the murder of one player by another, and a coach who tried to cover up the tragedy.

Scott rode into Waco with the dream to not only get to the NCAA Tournament, but to take the Bears to heights the program had never before reached: the top of the ladder on Monday night.

“We came with the chance to win a national championship,” Scott said during his introductory news conference in 2003. “We have the resources, we have the people, we have the leadership. That’s my goal in the next few years. It might take some time, but I can tell you this, our staff will have the work ethic, the integrity and the commitment to success needed to get this program where it needs to go. Together, we’re going to build something here, and I can’t wait for the ride.”

That ride has lasted 18 seasons before culminating in Monday’s championship. There was the rough beginning in 2003 when the scandal depleted much of the roster. The NCAA took away Baylor’s ability to play nonconference games in 2005.

“We all knew what he was capable of because he knows what he wants, and with how he is, anything is possible,” Valparaiso City Council member Casey Schmidt said. “So many people are amazed today by all this, but it wasn’t a big surprise to us. We knew it wouldn’t be easy, but we all believed in him.”

While Kozlowski flew in on Sunday, Schmidt, who played under Homer at Valparaiso, was in Indianapolis for Baylor’s entire run to the championship. He was joined Monday night by a group that included Mouse, a fraternity brother from Butler, Frankie, a close friend from downstate, and Rob Behrend, a dentist in Valparaiso who has a dog named Baylor.

“I don’t really know how to put this whole experience into words,” Schmidt said. “You feel it for the entire Drew family. People on the outside, they look at them like this great basketball family, and they are, but to us, they’re known as our friends and our family.

"To see one of your best friends have success, reaching that peak, and then it just goes right down the line. We all came together to be here. We’ve been saying for 18 years, if it ever happens, we’ll be here.”

A 21-year-old man and 22-year-old woman were identified as the crash victims.

A man called police after seeing what appeared to be human remains in a wooded area in the 2100 block of Washington Street, Cmdr. Jack Hamady said.

Erin Sowa admitted in her plea agreement she shot Anthony Syler, 27, of Gary, in the head "in sudden heat" April 8, 2020, in an alley east of the 700 block of Cleveland Street.

The suspect was driving one of four high-performance Dodge and Jeep cars that were stolen from a LaPorte Dodge dealership and later seen traveling over 150 mph on the interstate, an Indiana State Police said.

Person flees after being ejected in rollover crash, police say

Two others suffered minor injuries from the wreck.

A Gary man was wanted Monday on charges alleging he shot a transgender neighbor in the back after they argued and keyed each other's vehicles because the man made fun of the neighbor's gender, court records state.

Baylor head coach Scott Drew gets a hug from Mark Vital at the end of the NCAA Tournament championship game against Gonzaga on Monday at Lucas Oil Stadium in Indianapolis. Baylor won 86-70.

Baylor head coach Scott Drew holds the trophy after the NCAA championship game against Gonzaga on Monday at Lucas Oil Stadium in Indianapolis.

Baylor head coach Scott Drew cuts down the net Monday after leading his team to the NCAA Tournament championship against Gonzaga at Lucas Oil Stadium in Indianapolis.