Within minutes of U.S. Rep. Pete Visclosky, D-Gary, declaring Wednesday he will not seek reelection next year to a 19th term, two Hammond Democrats announced their campaigns to succeed him — with many more candidates still likely to come.

In the race are Hammond Mayor Thomas McDermott Jr., who already had been eyeing a Democratic primary challenge to the Region's long-serving congressman, and North Township Trustee Frank J. Mrvan.

Since 1933, when Indiana's 1st Congressional District was recentered on Northwest Indiana, just five different people, all Democrats, have represented it in the U.S. House.

Here are their names, hometowns, and years of service:

Neither wasted any time in trying to distinguish himself from each other, and, to some extent, from Visclosky.

McDermott, 50, said he's running to change Congress and the hyperpartisanship that he said is causing the national legislature to be “dysfunctional,” “ineffective” and “not good for America.”

“We're the best country in the world and we better start acting like it,” McDermott said. “Washington D.C. is broken. They need people like me because I'll go in there and try to fix it.”

The four-term Hammond mayor, who won reelection to a fifth term Tuesday, said he would model his House service on the bipartisan, problem-solving example set by former U.S. Sen. Joe Donnelly, D-Ind.

Now that our local elections are over, and Congressman Pete has announced his intentions to not seek re-election, I want everyone to know that I am a candidate for this office in 2020, and that I intend to be Northwest Indiana’s next Congressman.#MayorTomforCD1

Specifically, McDermott said he is “100%” committed to continuing Visclosky's efforts to secure federal funding for the expansion of the South Shore Line from Hammond to Dyer in west Lake County, and the double-tracking of the existing commuter rail line between Gary and Michigan City.

He said he'd also try to take the Region's rail connection to high-wage Chicago jobs even further by extending the West Lake corridor south to Lowell and constructing a spur off the main line to Valparaiso.

“I'm going to fight for the South Shore,” McDermott said. “It's a project that's well down the tracks already and I'm going to jump on board where Congressman Pete left off.”

Mrvan envisions similarly carrying on a top Visclosky priority if he's elected to the U.S. House: supporting and protecting organized labor in Northwest Indiana, particularly in the steel industry, as well as aiding other Region residents in need.

The 14-year township trustee said he excels at bringing people together in North Township, which covers Hammond, Whiting, East Chicago, Highland and Munster, and wants to do the same for all residents of the 1st Congressional District.

"I've looked in the eyes of people who don't know where to turn when they lose employment, and I've helped them get through those moments," Mrvan said.

He acknowledged in Congress he generally would be removed from the type of direct assistance he now provides.

But Mrvan said in Washington he could ensure Northwest Indiana continues to have a good economy, along with advancing transformative projects giving people more reasons to move to or stay in the Region, such as the South Shore Line.

"Ultimately, we want to be able to provide the greatest amount of mass transportation to be able to get to the second or third largest economy in the world — Chicago," Mrvan said. "We also have to look at public transportation as far as buses to get people to the train."

"All that has to have a vision, and you have to be able work with all communities and be able to know what their vision is and their strategic plans."

He said that's a different approach than McDermott, whose combative style occasionally has been known to rub people the wrong way.

"Everything that I've read and researched, I believe that impeachment is the total process," Mrvan said. "The concept that it is going to stall progress in Congress, they really haven't gotten anything done anyway over the last three or four years. So I think that's a myth."

McDermott almost certainly enters the contest as the front-runner given his preparation toward challenging Visclosky in the primary; a fact Mrvan admitted in describing the campaign as a “David vs. Goliath” scenario.

At the same time, Mrvan said anything can happen when there's a race with no incumbent, and this is the first open seat election in the 1st Congressional District since Visclosky won in 1984.

“We're all starting fresh,” Mrvan said. “So everyone has to build upon the relationships that they have, hopefully strengthen them, and be able to move on upward and onward.”

"This is something I have always wanted to do. I have prepared myself my entire career by caring about people, by looking out for children, by being there when the unions were on strikes. There are multiple ways that I have proven that I care about our district."

McDermott said he's confident the plans he made to launch a primary challenge to Visclosky, including a campaign logo that he posted online Wednesday and an established campaign headquarters in Hammond, will give him the momentum needed to prevail against anyone who enters the race.

“I'm way ahead of the game as far as any other opponents that are going to run against me,” McDermott said.

“It was the worst-kept secret in Northwest Indiana that I was planning to run. I wanted to run against Pete because I think I would have beat him. But obviously, with him not running, it's a totally different race now.”

It's too soon to say how many other candidates will compete to represent the district, which includes all of Lake County, Porter County, and western LaPorte County.

"It's obviously a really important decision that our Region is going to make and so I'm going to take a little time to think about it," Harper said.

"Continuing to serve my community at the national level would certainly be a privilege," Candelaria Reardon said. "Congressman Visclosky is not easily replaced, and, as such, a decision to run would take much thought and discussion with family and friends."

"All options are on the table," Hatcher said.

While the 1st District is heavily Democratic — it last was represented by a Republican in 1931 — the Region potentially could see an experienced Republican candidate also run next year, since he or she won't have to compete against Visclosky.

According to the secretary of state, filing for the race opens Jan. 8 and closes Feb. 7. The primary election is May 5, 2020. 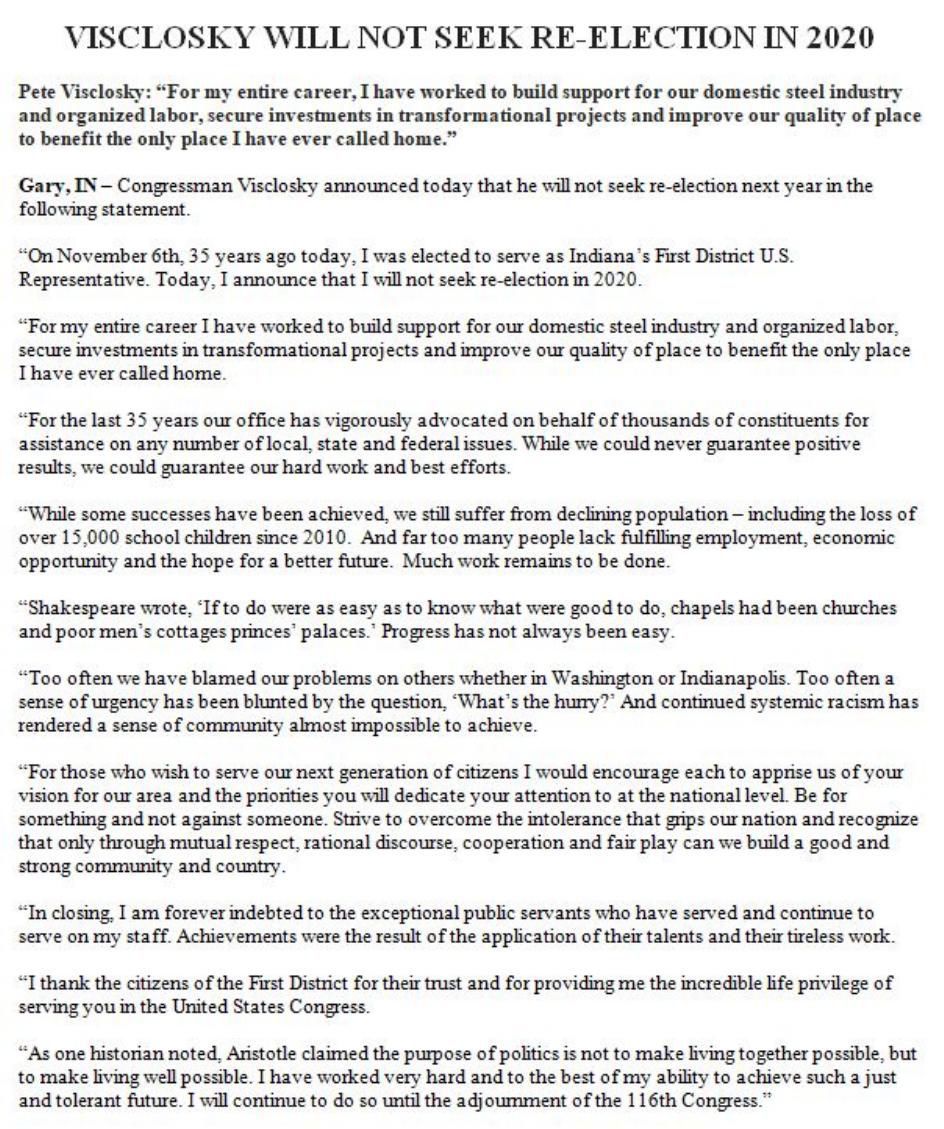 More in Visclosky is set to retire at conclusion of his 18th term representing NWI. Here's a look at our coverage since that announcement (2 of 7)

McDermott says focus is November election, not Visclosky — for now

HAMMOND — Mayor Thomas McDermott Jr. is not denying he's interested in "moving up the ladder" politically, which could include a primary elect…

Will McDermott run against Visclosky?

CROWN POINT — Hammond Mayor Thomas McDermott Jr. is certain to win a fifth term at the Nov. 5 election after the bipartisan Lake County Board …

COLUMBUS, Ind. — Democrats will hold a City Council majority in Vice President Mike Pence's Indiana hometown for the first time since the 1980…

SOUTH BEND, Ind. — A top aide and high school friend of Democratic presidential candidate Pete Buttigieg will replace him as mayor of his Indi…

WASHINGTON — Democrats announced they will launch public impeachment hearings next week, intending to bring to life weeks of closed-door testi…

BEAR CREEK, N.C. — The 10th graders in Aedrin Albright's civics class at a rural North Carolina high school had done their homework, and now i…

State Sen. Eddie Melton, D-Gary, says he's being encouraged by both Democrats and Republicans to consider giving up his campaign for Indiana governor, and instead running to succeed retiring U.S. Rep. Pete Visclosky, D-Gary, in Congress.

MUNSTER — Another candidate appears to be preparing to enter the contest to succeed retiring U.S. Rep. Pete Visclosky, D-Gary, in Congress.

HAMMOND — Hammond's mayor and his wife, a judge, are preparing to repay $50,000 in campaign contributions originally paid to her judicial camp…

HIGHLAND — The longtime clerk-treasurer for the town of Highland is running the numbers on a potential campaign to succeed retiring U.S. Rep. …

After The Times reported on McDermott favoring censure, the four-term mayor said Monday he recently changed his mind to support impeachment after watching House committee testimony.

Visclosky votes in favor of both impeachment charges against President Trump

The 18-term Region lawmaker — who voted against the 1998 impeachment of Democratic President Bill Clinton — entered the a statement in the Congressional Record explaining his decision.

The Hammond mayor believes someone is trying to prevent him from communicating with residents by repeatedly disrupting the live Facebook video of his appearances on the WJOB Network.

A Republican congressional candidate who has lost seven times this century to retiring U.S. Rep. Pete Visclosky wants to see how he'll fare without Visclosky on the ballot. 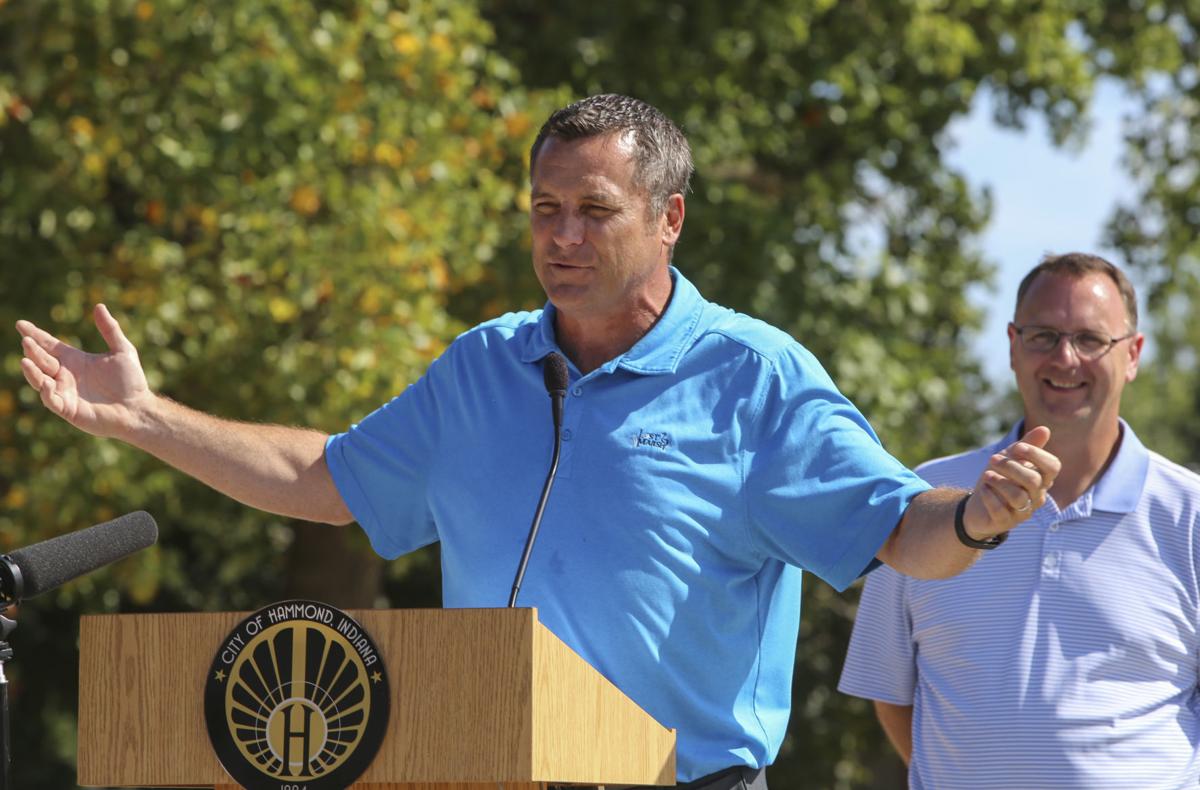 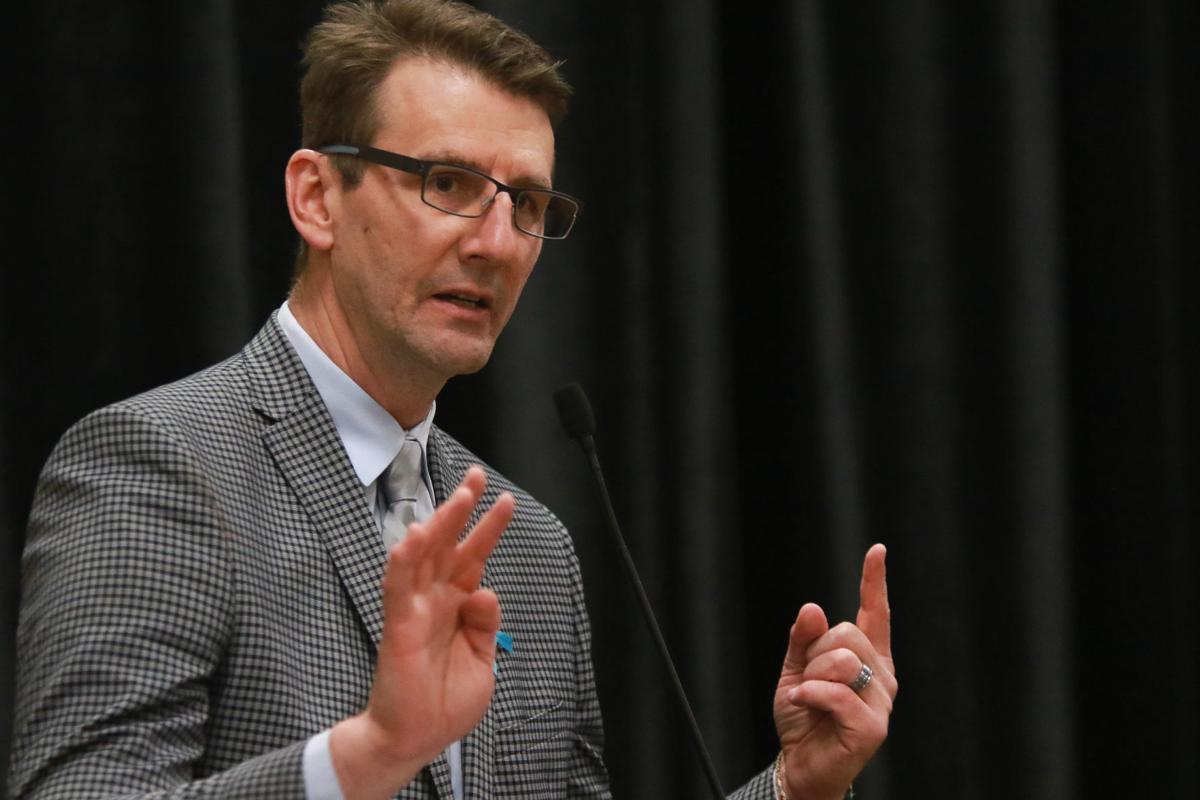