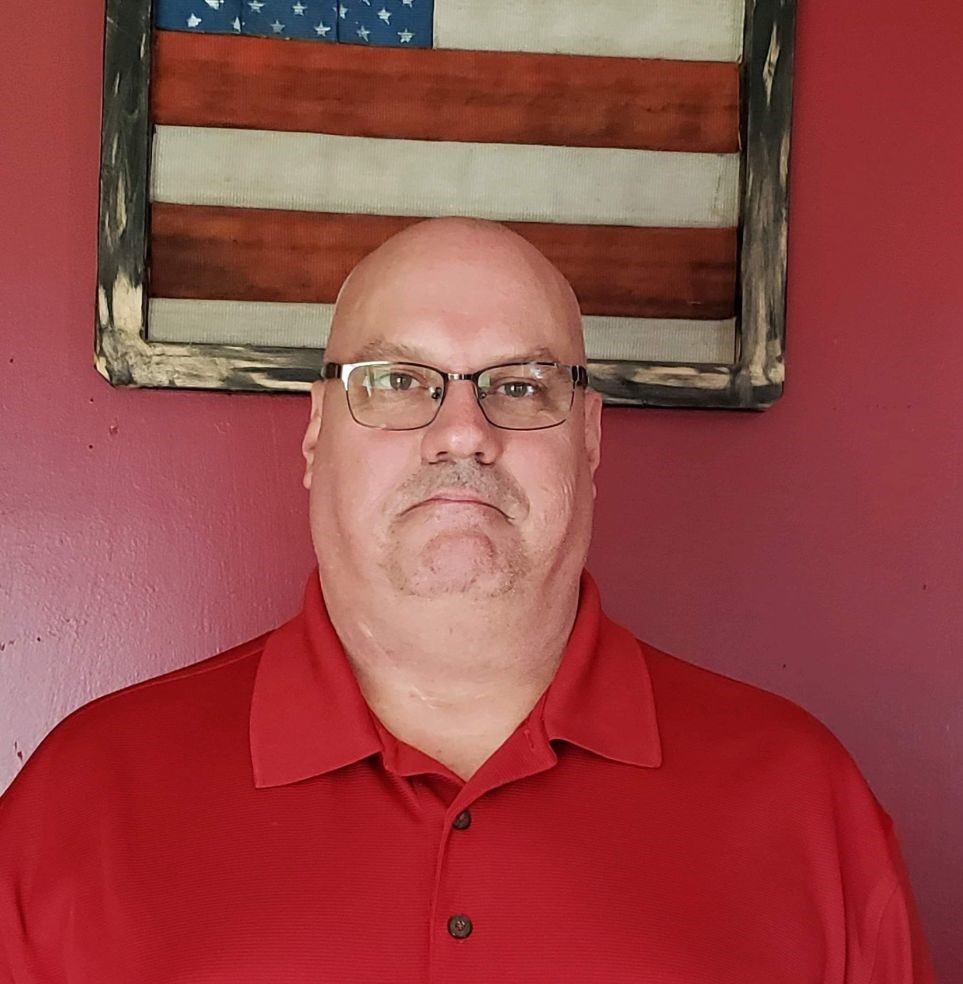 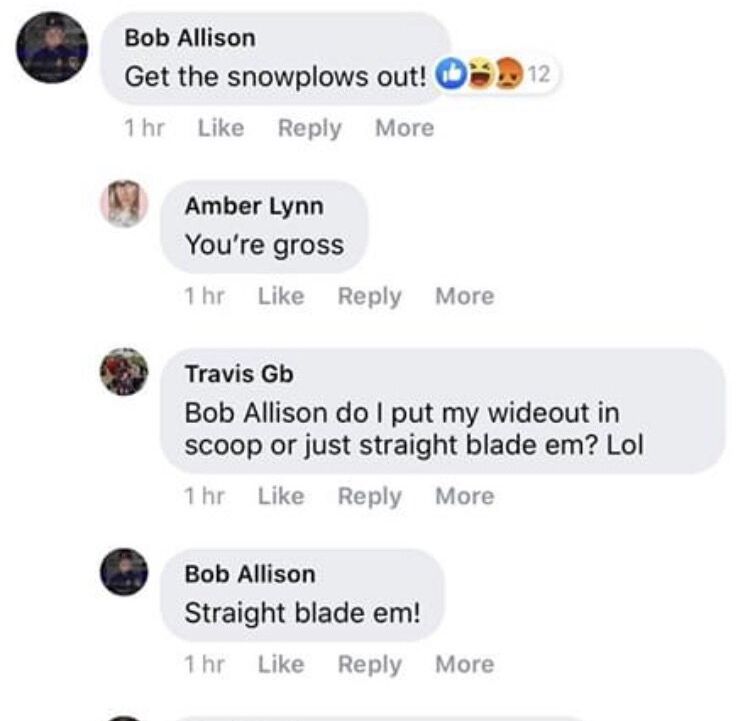 A screenshot of part of the conversation by Chesterton Town Councilman Robert Allison, D-3rd. 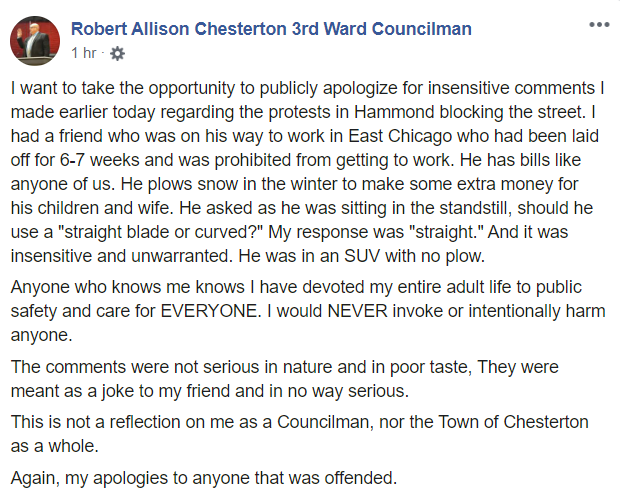 CHESTERTON — Chesterton Town Councilman Robert Allison apologized Saturday night for posting a comment on Facebook earlier in the day suggesting a plow truck driver "straight blade" protesters who took to the streets in Hammond over this week's death of a black man involving a white police officer in Minneapolis.

"I had a friend who was on his way to work in East Chicago who had been laid off for 6-7 weeks and was prohibited from getting to work," Allison wrote in a post on his councilman page on Facebook. "He has bills like anyone of us. He plows snow in the winter to make some extra money for his children and wife. He asked as he was sitting in the standstill, should he use a 'straight blade or curved?' My response was 'straight.' And it was insensitive and unwarranted. He was in an SUV with no plow."

A Facebook user commenting on the apology pointed out that it was Allison who initiated the snowplow comments.

"So please don’t play it off as he was asking if he should use a straight blade or curved," the user said. "Your response was not as simple as 'straight.'"

The conversation, which appeared on Allison's personal Facebook page and drew immediate criticism from other Facebook users, includes Allison telling his friend, "Get the snowplows out!"

The protest Saturday in Hammond was in response to the police death of George Floyd, who died after an officer knelt on his neck for several minutes during an arrest. Floyd's death sparked protests across the country, and the officer who knelt on his neck has been charged with third-degree murder.

After another Facebook user calls Allison "gross," his friend replied, "Bob Allison do I put my wideout in scoop or just straight blade em? Lol."

Allison did not respond to a request for comment from The Times.

But in his posted apology, which came after The Times reached out for comment, he wrote, "Anyone who knows me knows I have devoted my entire adult life to public safety and care for EVERYONE. I would NEVER invoke or intentionally harm anyone."

The Facebook comments refer to Allison being on the Chesterton Fire Department, but a call to the department Saturday revealed he is no longer on the force.

"The comments were not serious in nature and in poor taste. They were meant as a joke to my friend and in no way serious," Allison, D-3rd, wrote in his post. "This is not a reflection on me as a Councilman, nor the Town of Chesterton as a whole. Again, my apologies to anyone that was offended."

Porter County Democratic Central Committee Chairman Jeff Chidester said Saturday he was not familiar with Allison and has no recollection of Allison taking part in any party functions.

"I don't know him at all," he said. "It's unfortunate that guy takes that type of attitude."

A Facebook user commenting on the apology said, "That must have been a terrible inconvenience for your friend ... What this man experienced is nothing in comparison to the pain felt by George Floyd, his family, and the black community on a daily basis. I expect more tact from a representative of our brave, proficient firefighters and town."

5 important stories you need to know from the weekend: Cops form blockade to keep protesters off I-80/94; mayor works to calm crowd

Region officials denounced the tragic death of George Floyd as protests and national unrest fomented elsewhere in the country over the slaying of the man by police in Minnesota.

The officer said he drew his Taser and aimed it at Adam Casko threatening to use it if made another aggressive move, police said.

The move came out of "an abundance of caution for the safety of our employees and passengers," the commuter rail line tweeted.

Protests force Target, CVS and Walmart to close some stores

Retailers large and small have closed some of their stores across the country because of disruptions caused by protests over the police killing of George Floyd in Minneapolis.

While Chicago officials took steps to restrict access to downtown after tense weekend protests over the death of George Floyd, unrest spread to the city's neighborhoods and suburbs.

More than half of the weekend’s victims were shot on Sunday following violent protests Saturday night that led to hundreds of arrests and a curfew.

Hammond and Calumet City have extended their curfews while businesses clean up after looting.

More Republican women than ever are seeking House seats this year thanks to a reenergized recruitment effort after their limited ranks in Congress diminished even further in the 2018 election. But any gains in November could be modest.

Two nights of protest were followed by a night of relative calm after a weekend that left the city with widespread damage downtown, officials said.

Polling places will be open from 6 a.m. to 6 p.m. Tuesday for voters to choose the Democratic and Republican candidates they want to compete in the Nov. 3 general election.

"I've cleaned up more glass that I have seen in my life," Cullen Wulf said Monday. "It just hurts."

The resumption of access to the downtown area comes as the city begins to reopen after weeks of being shutdown as a result of the coronavirus pandemic.

Authorities are investigating interference with police radio communications, websites and networks used by law enforcement and other officials during recent protests.

A screenshot of part of the conversation by Chesterton Town Councilman Robert Allison, D-3rd.