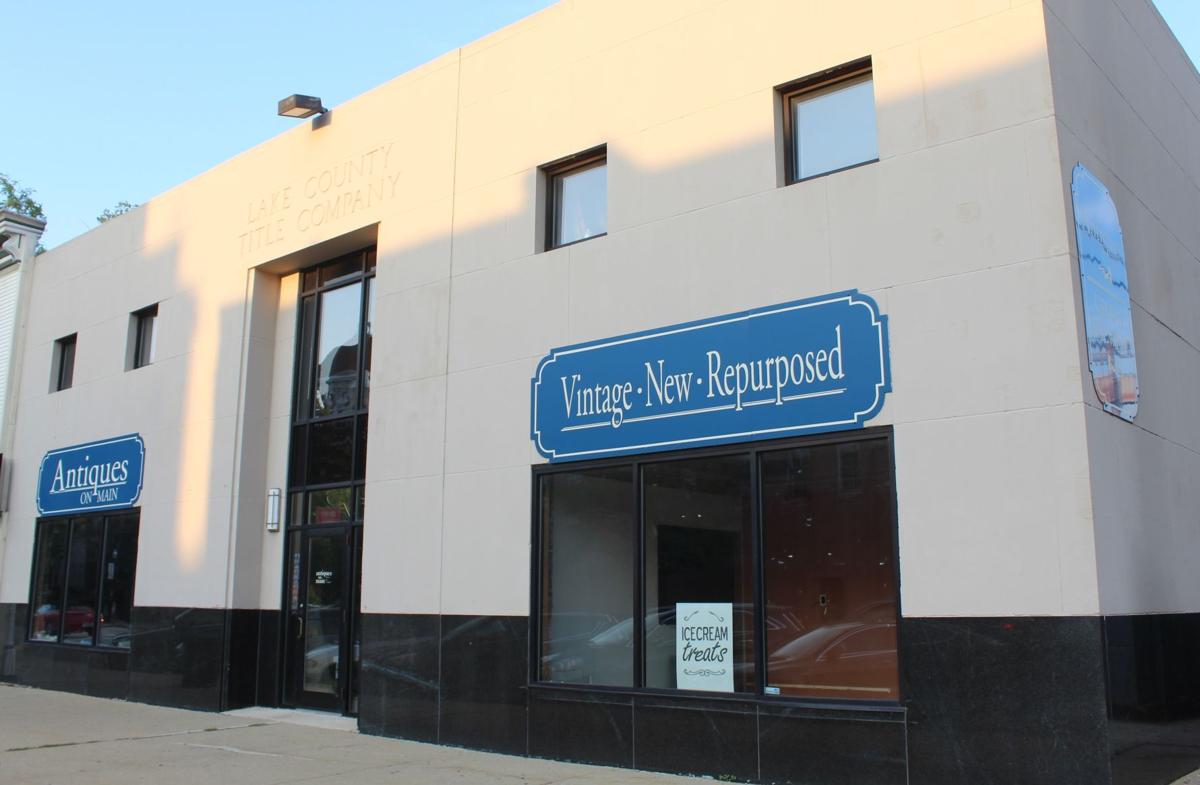 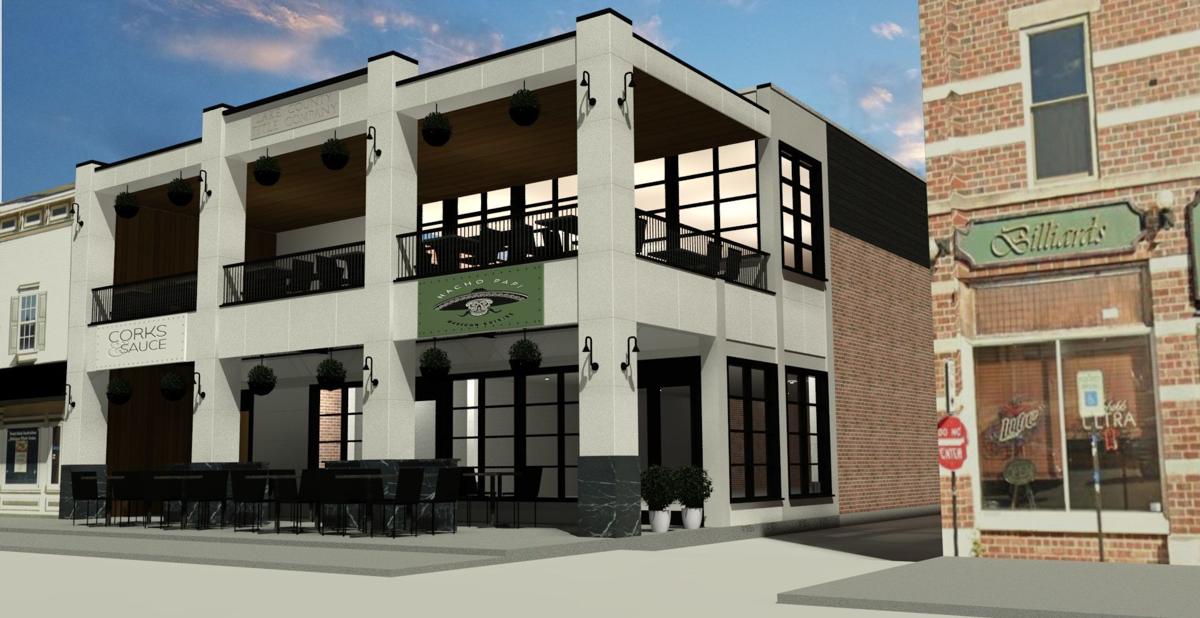 A rendering is shown for the new design of 208 S. Main St., which was presented to the Crown Point Historic Preservation Commission during an Aug. 30 meeting. 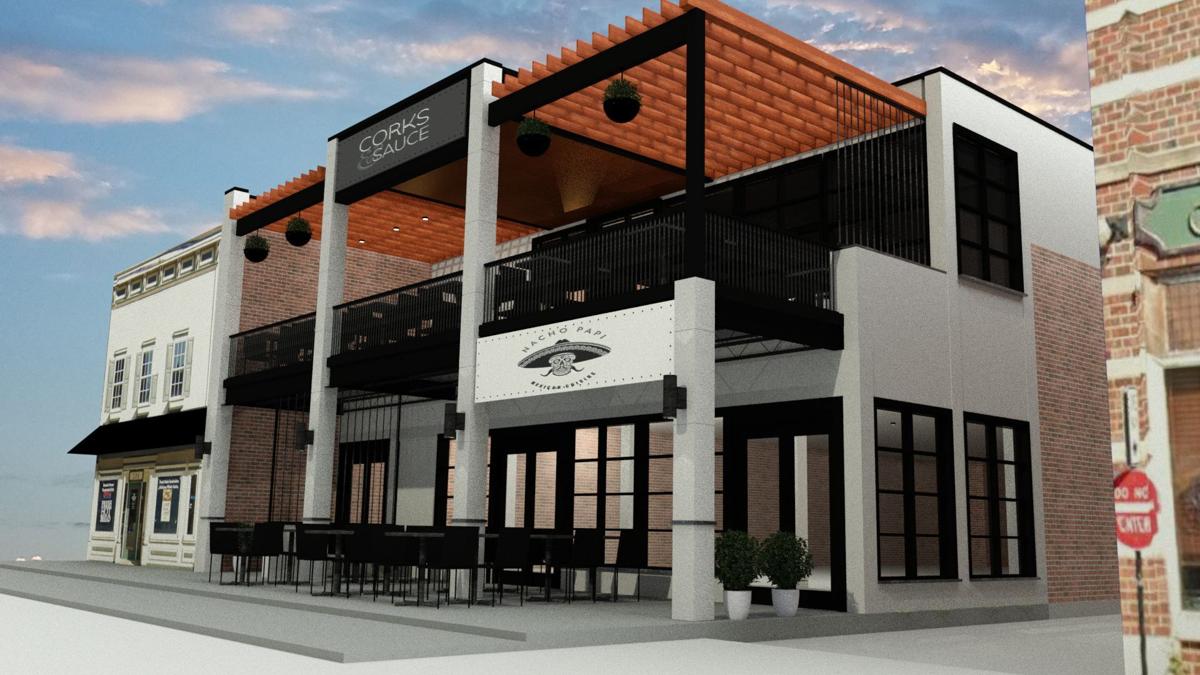 A rendering shows an old design for 208 S. Main St., which was presented to the Crown Point Historic Preservation Commission during an Aug. 23 meeting.

CROWN POINT — After back and forth with the Crown Point Historic Preservation Commission over various meetings, Kyle Ropac was given the green light to move forward with a new facade design for a historic downtown building, which will house two restaurants in the near future.

It was during a special meeting Monday the commission, in a 5-2 vote, approved the design with conditions.

The conditions include the building facade will have a black granite knee wall, the same height as the existing; the building material will be limestone or limestone composite; the second floor will have a solid roof; the second floor soffit fascia will be the same height as the second floor balcony fascia; the second floor expansion roof height along the south and east sides will be lap siding in a contrasting color, with the siding about 8 feet in height; light fixtures are on hold until a later date; columns will be 30 inches in width; the Lake County Title Company sign and 1936 date in the marble will be saved; the windows and railings will be a black anodized aluminum; and window patterns will be as show in the illustration.

The approval comes after the commission previously OK'd removing 32 feet of the building's front facade after it was deemed unsafe.

"We pushed everything back to the original wall at 32 feet that we believe was the original building site," Ropac told commissioners Aug. 23.

Ropac then presented commissioners with a new facade design at the Aug. 23 meeting.

As presented then, the design featured an open first floor patio, as well as an open balcony on the second floor with a wooden pergola roof to allow for outdoor dining.

"With coronavirus, we have some guests that will only come during the summer months, the summertime because of the outside eating," Ropac said. "The world is changing, and I'm trying to adapt with it as a business person."

While commissioners said they liked the design, they felt it was too modern for the Courthouse Square Historic District, and asked Ropac to pay more homage to the look of the 1936 limestone, art-modern style building facade.

"I like the building as a design, but not for Crown Point, not in this area. It just does not fit the district that we're wanting to put it in," Commissioner Todd Kabella said.

"I understand the investment that you're trying to put in here is massive amounts of money, and we appreciate that so much. However, this design is just, it's just so — radical to me is a bit extreme, but it is. It is radical for everything else that we've held the other building owners to."

On Monday, Ropac presented commissioners with a revised design.

The new design included a black granite knee wall on the first floor of the building; a solid roof on the second floor balcony; widened columns; and the preservation of the old Lake County Title Company and 1936 building engravings.

Ropac said he didn't pull the restaurant entrances out "because when I did it totally obstructed all views." He also didn't make the second floor railing solid because it "enclosed the whole thing."

As presented Monday, Ropac said the building pays homage to the original structure that once stood at 208 S. Main St., which was a hotel and restaurant and featured a balcony. The original building, built in 1840, was demolished to make way for the building as it stands today, Times archives show.

The commission, however, asked Ropac pay homage to the 1936 Lake County Title Company building, not the razed Commercial Hotel.

"There's a lot of discussions about 'recreating history.' That building, as valuable as it was, and as important as it was, is gone," Commission Vice President Jim Kendall said.

The 1936 building, Kendall added, is a part of the National Register of Historic Places.

"Speaking for me, if I'm going to recreate history ... I think it should be more back to the 1936 building, as opposed to something that was 1840s," he said.

Ultimately, the commission approved the new design. Of the approval, Ropac told The Times, "it feels fantastic."

"I think the important part is that we worked together," Ropac said. "It was nice to see the historic board took the time over and over to give me more direction each time so we can finally get to a spot where everybody felt comfortable."

Demolition work has already begun on the interior of the building, with the removal of the first 32 feet of the facade to begin in the coming weeks, Ropac said.

Ropac said he hopes to be open for business in April 2022, or May 2022, weather permitting.

While the Commission voted 7-0 to have the existing front facade removed, it did not vote on a new facade for the historic building at 208 S. Main St.

A grave marker for Blanche Eberhardt (nee Mandernach) has found its final resting place after being uprooted about two years ago from the front yard of a Crown Point home.

No action was taken to approve the city moving ahead with the project, however, the Crown Point City Council utility committee has asked Commonwealth to proceed with schematic design work.

3 NWI sisters, 11 years apart, share motherhood journey after giving birth within weeks of one another

The three sisters, who are 11 years apart, found out they were all pregnant last summer, with weeks between their due dates.

Jon Gilmore, president and CEO of Tonn and Blank Construction, said steel began going up for the project last week, and motorists will be able to see the landmark hospital from I-65 "here soon."

“This park is beautiful,” Ross said. “I’m so honored they named it for me. It’s a nice contribution to what they’re already doing around town.”

A rendering is shown for the new design of 208 S. Main St., which was presented to the Crown Point Historic Preservation Commission during an Aug. 30 meeting.

A rendering shows an old design for 208 S. Main St., which was presented to the Crown Point Historic Preservation Commission during an Aug. 23 meeting.