The Indiana chapter of the American Civil Liberties Union is accusing the Indiana State Police of unlawfully preventing death penalty opponents from demonstrating outside the federal prison in Terre Haute during recent executions.

The ACLU filed a lawsuit in Indianapolis Tuesday asking U.S. District Court Judge J.P. Hanlon, a Valparaiso University Law School graduate, to allow individuals and groups favoring abolition of the death penalty to stand vigil outside the prison gates, instead of a significant distance away from the facility housing the sole chamber for executing federal offenders sentenced to death.

According to the lawsuit, the Indiana State Police prevented some two dozen death penalty opponents from standing near a state highway adjacent to the Terre Haute prison complex gates in July when three men were executed — the first individuals put to death by the federal government in 17 years.

Instead, state police barricaded the roads near the prison, strictly limited access to the area, and compelled the death penalty demonstrators to gather near a car dealership parking lot approximately 1.8 miles away from the prison near busy U.S. Highway 41, the lawsuit claims.

"Protesting in the car lot on U.S. Highway 41 was not a satisfactory alternative as the protesters were not able to see the death chamber or even be close to the prison where they could stand in solemn vigil when the execution occurred," the lawsuit says.

The lawsuit asks Hanlon — appointed to the bench in 2018 by Republican President Donald Trump — to affirm the state police violated the plaintiffs' First Amendment rights, and to authorize death penalty foes to gather at the prison gates during the federal executions scheduled for August 26 and 28 and September 22 and 24.

"There is absolutely no justification for keeping plaintiffs' members and the individual plaintiffs this far from the entrance to the institution and doing so severely compromises their ability to express themselves and to express their opposition to the death penalty while in sight of the prison," the lawsuit says.

A telephonic status hearing on the ACLU lawsuit is scheduled for Wednesday before Magistrate Judge Debra McVicker Lynch.

The Indiana attorney general's office, which is representing the state police in the case, said it will "vigorously defend the interests of the state."

The state of Indiana separately maintains its own death chamber at the Indiana State Prison in Michigan City.

Eight men currently are incarcerated on the state's death row while their legal appeals or competency are pending, according to the Department of Correction.

The most recent execution conducted by Indiana was in 2009. 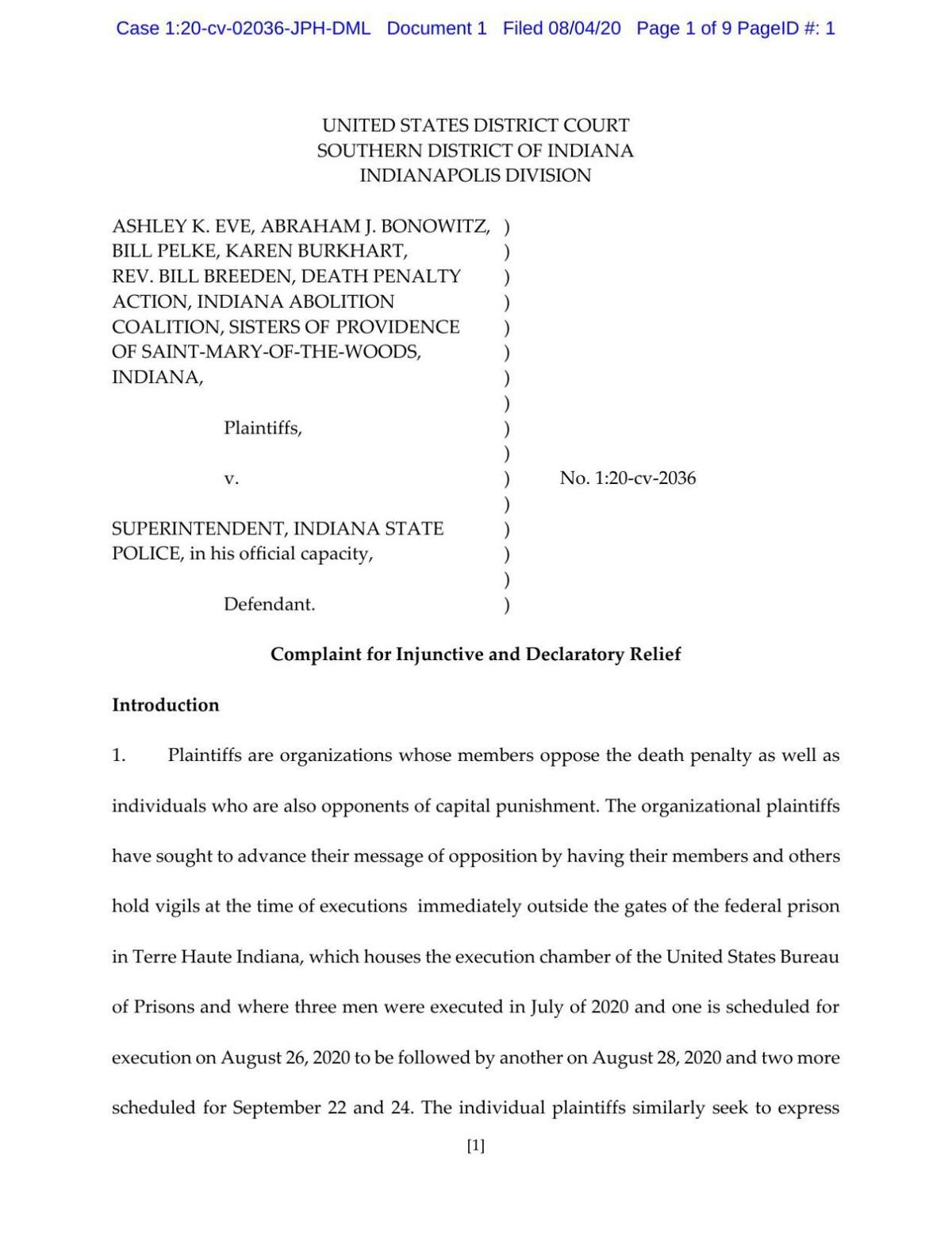 Sunisa Lee's father after gold: 'Is this real?'

Sunisa Lee's father after gold: 'Is this real?'

A meth kingpin who killed five people, including two young girls, in 1993 to thwart his prosecution for drug trafficking is set to become the third federal inmate to be executed this week.

Family members of three people slain in Arkansas more than 20 years ago have been among the most vocal opponents to the federal government's plan to execute one of the men convicted of killing their loved ones.

US carries out the 1st federal execution in nearly 2 decades

The federal government on Tuesday carried out its first execution in almost two decades, killing by lethal injection a man convicted of murdering an Arkansas family in a 1990s plot to build a whites-only nation in the Pacific Northwest.

The only Native American on federal death row is scheduled to be executed in late August, the U.S. government announced Wednesday.

INDIANAPOLIS — Indiana plans to replenish its depleted stock of execution drugs by offering total anonymity to a drug maker, distributor or in…

The only Native American on federal death row lost a bid Thursday to push back his execution date.

The killing of an inmate who was beaten to death at a federal lockup in Indiana is under investigation by the FBI, according to documents obtained by The Associated Press.

A judge halted the federal government's planned execution of a man who kidnapped, raped and killed a 10-year-old girl, saying the law requires the government to get a prescription for the drug it plans to use.

5th federal execution of 2020 on again after drug ruling

The scheduled federal execution of a 10-year-old girl's killer was back on track Friday after an appellate panel tossed a lower court's ruling that would have required the government to get a drug prescription before it could use pentobarbital to kill the man.

A request to add a new state-funded magistrate to the Lake County courts is eligible for consideration by the Indiana General Assembly next year.