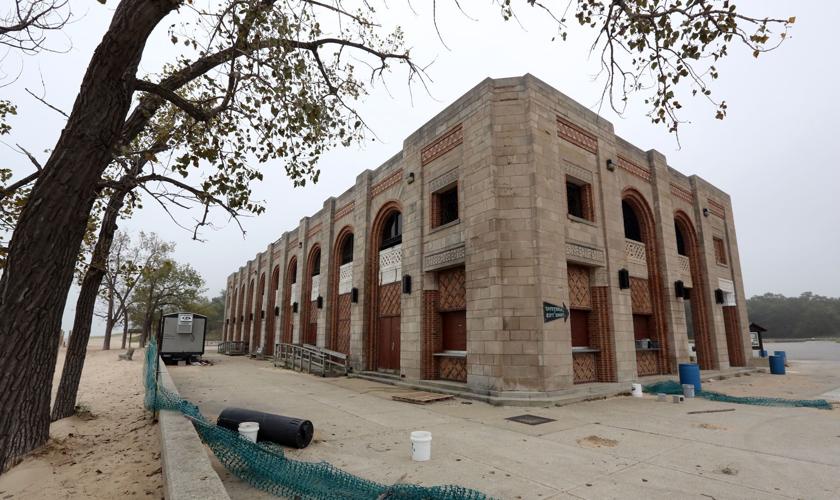 A view of the Indiana Dunes State Park Pavilion in Chesterton is pictured. A restaurant is planned for this location as part of a major renovation. 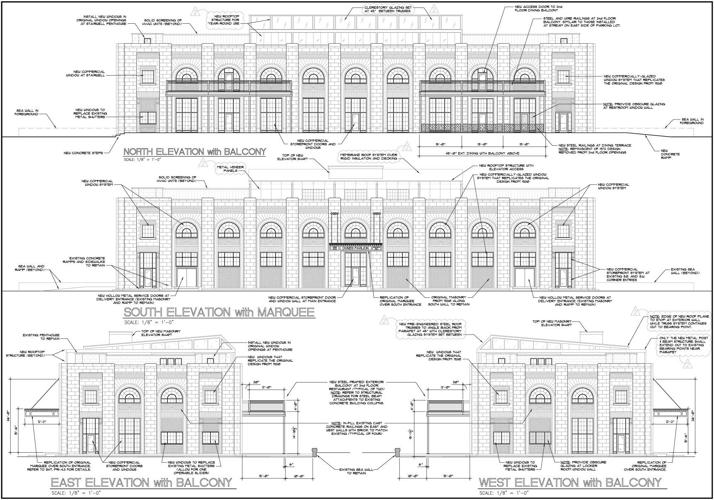 The Indiana Department of Natural Resources has approved plans by Pavilion Partners for the renovation of the historic pavilion at Indiana Dunes State Park. This is what the exterior will look like when the project is completed.

CHESTERTON — There could be far-reaching repercussions if plans for the restoration of the pavilion at the Indiana Dunes State Park don't meet federal criteria.

Emily Ferguson, Land and Water Conservation Fund compliance lead for the National Park Service, said Thursday that while negotiations are continuing between them and the Indiana Department of Natural Resources on compliance issues, a drastic result could be the withholding of federal grant money, not only for local state park projects but for other projects across Indiana.

The latest saga in the attempt to restore the pavilion came this month after activist groups alerted the NPS restoration plans had changed since that agency initially gave its approval.

The NPS review is necessary because the state park has utilized Land and Water Conservation Funds in the past and the property may not be converted to uses that do not support public outdoor recreation.

Chuck Williams, managing partner for Pavilion Partners LLC, said the plans at issue on the DNR's website are not the final plans for the project.

Jim Sweeney, co-founder of Dunes Action, said those new plans for the project were submitted to the DNR in February. However, those plans were never forwarded to the National Park Service to determine if the plans were in compliance with the federal Land and Water Conservation Fund.

Ferguson confirmed the NPS never received a new set of plans from the DNR for review.

Those new plans resulted in a letter from the NPS citing concerns.

"First, thank you for letting us know that the plans for the Pavilion Project had been updated. You were correct that we had not seen that new plans had been posted that were different from the version (dating to June 2016) that we previously reviewed," read a letter from Jeffrey P. Reinbold, assistant director in partnerships and civic engagement at the National Park Service.

The letter was addressed to Public Employees for Environmental Responsibility, who, along with Dunes Action, have been protesting plans to restore the pavilion and the contract awarded by the DNR to Pavilion Partners LLC in 2011 to renovate the deteriorating pavilion and operate food services at the state park.

Reinbold wrote in the letter the plans, posted on the DNR's website, "have changed enough" to require a new review "because the Pavilion Project no longer appears to be secondary and supportive of outdoor recreation."

He also called several changes "problematic." Reinbold said a letter was sent to the DNR on May 15, giving three options: revert to the original plan; submit updated plans for a new determination; consider a land conversion to add land to the park in compensation for the land lost to the pavilion.

The revised plans, Reinbold wrote, would result in the pavilion being much less open to the public than originally proposed and "that is the main basis for our current concern."

"The current plans turn the pavilion into a tavern on the lake," Sweeney said. "We've said all along that fine dining and rooftop pubs don't support the average beachgoers or campers."

Sweeney said the groups support "an appropriate" restoration of the building.

"We think we have a great partnership with the state," said Ferguson, adding there has been no deadline given to the DNR to choose one of the three options. "We think that would be inappropriate. We are all working together to reach the right resolution."

DNR communications director Tara Wolf did not answer specific questions on the issue or on what the DNR's response will be to the NPS.

"DNR has been working and will continue to work with the National Parks Service and Pavilion Partners to move forward," she said in an initial response. "We will update the website when new things are received," following a second request for information.

"No plans have been finalized," Williams said, adding the plans on the DNR website were used for space planning. Final plans for the restoration project should be completed in the next couple of weeks, he said.

Williams said the final plans will be consistent with plans that were reviewed by the NPS in 2017 and determined to meet Land and Water Conservation Fund compliance.

Williams said it is up to the DNR to determine which option outlined by Reinbold will be chosen to satisfy the NPS requirements.

Information and plans for the restoration of the pavilion at the Indiana Dunes State Park can be found on the Indiana Department of Natural Resources website at: in.gov/dnr/parklake/8462.htm

CHESTERTON — Dunes Action, an organization opposed to the present plans for renovations to the pavilion at the Indiana Dunes State Park, is ca…

VALPARAISO — A public hearing Thursday morning on an alcohol permit for Indiana Dunes State Park has been cancelled, to the chagrin of opponents.

CHESTERTON — Opponents to the renovations of the pavilion at Indiana Dunes State Park have asked the local prosecutor to step into the fray.

This adorable red panda at a U.K. zoo is a 'miracle'

US abortion rights: Florida clinics overwhelmed by patients from other states

US abortion rights: Florida clinics overwhelmed by patients from other states

A view of the Indiana Dunes State Park Pavilion in Chesterton is pictured. A restaurant is planned for this location as part of a major renovation.

The Indiana Department of Natural Resources has approved plans by Pavilion Partners for the renovation of the historic pavilion at Indiana Dunes State Park. This is what the exterior will look like when the project is completed.