The decisions, which are expected to be appealed by Indiana's Republican attorney general, each strike down state laws nominally aimed at minimizing voter fraud, but were more likely to prevent legitimate voters from participating in the electoral process, the judges said.

Barker said not only are bipartisan county election judges not trained to understand potential legitimate reasons for signature variations, voters with a perceived signature flaw are provided no notice their mail-in ballot was rejected in time to cast another ballot at an in-person voting site.

"While the overall number of voters disenfranchised by the signature verification is not overwhelmingly large, there is nonetheless a real risk of erroneous rejection, particularly given the natural variations in a person's handwriting," Barker said.

According to court records, 32 of the 8,078 mail-in ballots (0.4%) cast in Lake County in the 2018 general election were rejected for a signature mismatch, while zero absentee ballots were rejected for that reason in either Porter or LaPorte counties.

Barker concluded the lack of opportunity to remedy a defective mail-in ballot violates the 14th Amendment's due process and equal protection requirements because "the state's reasons for the signature verification requirement do not outweigh the burden the challenged statutes place on the fundamental right to vote of Indiana voters entitled to vote by mail-in absentee ballot."

As a result, Barker prohibited the secretary of state and all county election officials from rejecting any mail-in absentee ballot on the basis of a signature mismatch, for the Nov. 3 general election and all future elections, absent adequate notice and cure procedures to the affected voter.

Julia Vaughn, policy director for Common Cause Indiana, a government accountability organization that backed the lawsuit, said the decision is "a historic win for Indiana voters."

"Election laws should protect people's right to vote and the integrity of our election system. Indiana's signature matching law failed to do either, and wrongly disenfranchised Hoosiers. The court made the right decision to block its enforcement," Vaughn said.

The second ruling, Indiana NAACP v. Lawson, permanently bars Republican Secretary of State Connie Lawson and the Indiana Election Division from removing a registered voter from the rolls, without a specific request from the voter or by following the voter removal process outlined in federal law.

A 2017 statute, updated earlier this year by the Republican-controlled General Assembly in Senate Enrolled Act 334, generally authorized election officials to automatically purge a registered Indiana voter, if a voter with a similar name, birth date and other identifying factors was found to be registered in another state.

U.S. District Court Judge Tanya Walton Pratt, appointed by Democratic President Barack Obama, said canceling a voter's registration without attempting to contact the voter, or waiting two election cycles if the voter cannot be reached and does not cast a ballot, runs afoul of the Constitution.

"Because an individual cannot vote after an election has passed, it is clear that the wrongful disenfranchisement of a registered voter would cause irreparable harm without an adequate remedy at law," she said.

In a statement, the attorney general's office said it is reviewing the orders "and will consider the options that are in the best interests of the state." 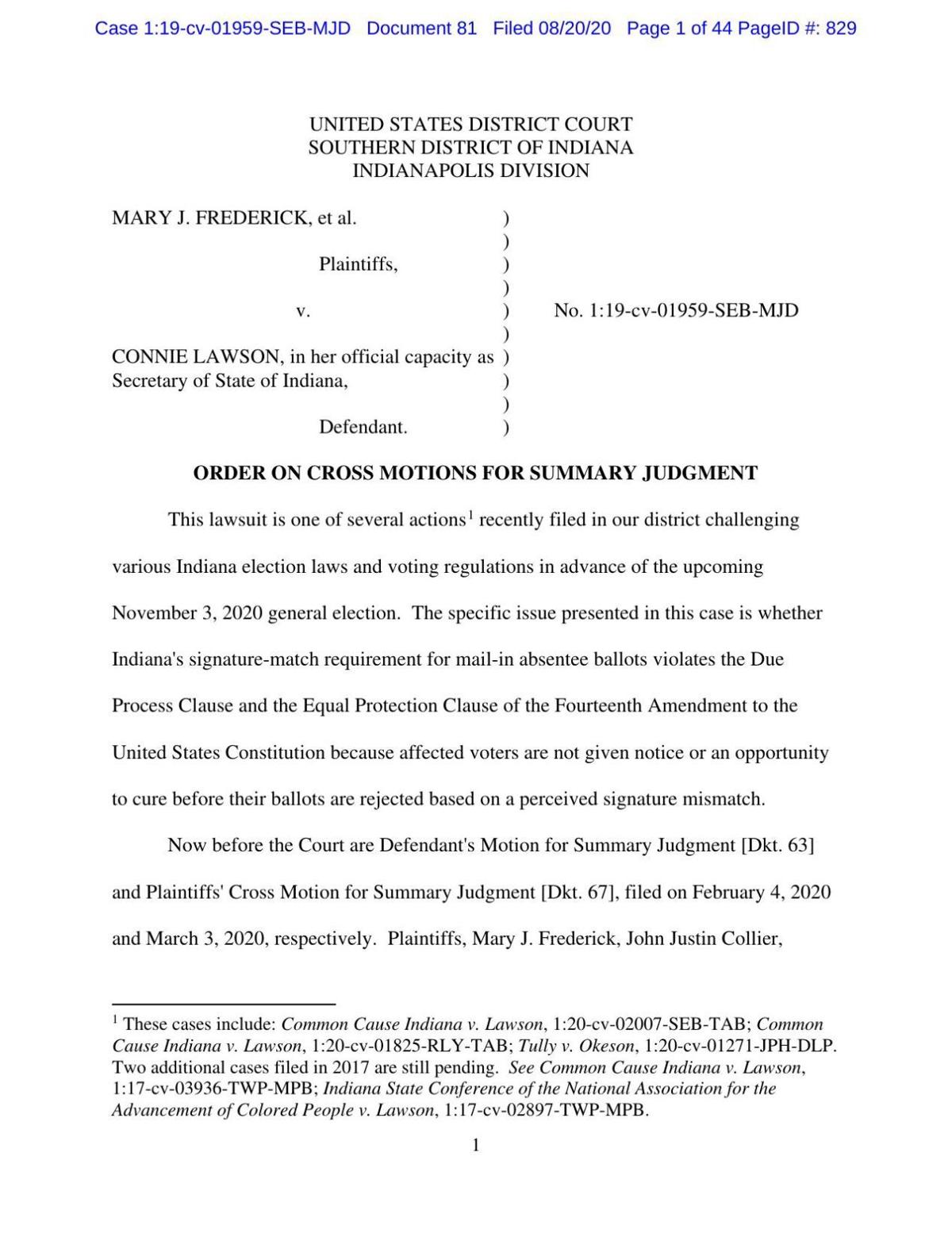 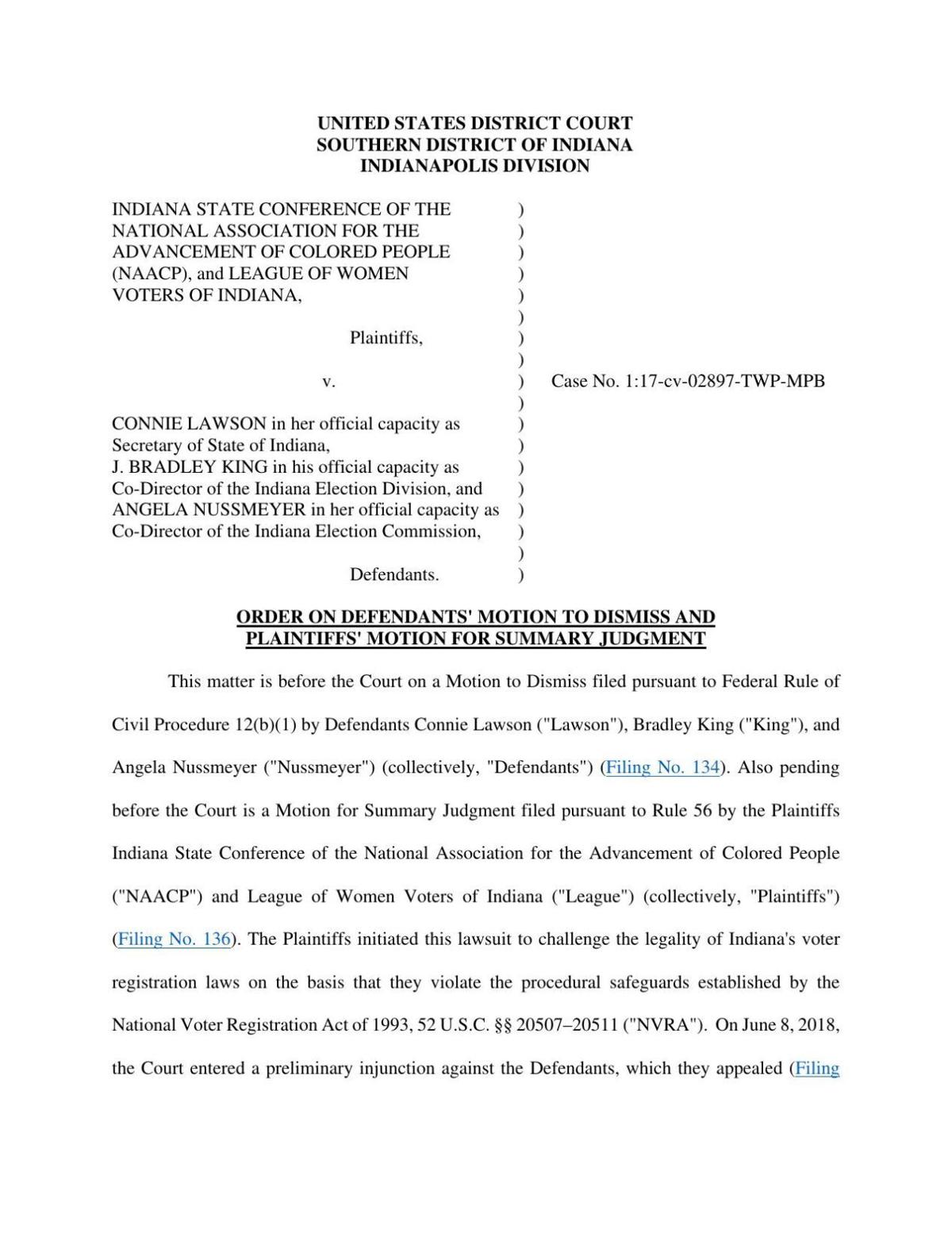 Gov. Eric Holcomb does not support making mail-in absentee voting available to all registered Indiana voters for the general election due to COVID-19.

Police are investigating a hit-and-run crash that occurred early Friday morning and killed a 57-year-old man from Gary.

A federal judge has rejected a request to make mail-in balloting available to every registered Hoosier voter for the Nov. 3 general election.

Mail-in ballot applications pouring in across Region, despite opposition

The number of applications, which are expected to continue growing through the filing deadline of Oct. 22, comes on the heels of a record-breaking number of mail-in ballots cast statewide during the June primary.

The Indiana Supreme Court is encouraging Hoosier lawyers to serve as poll workers at the Nov. 3 general election.

When Lake County election officials send out 15,000 requested mail-in ballots this week it will break the 2008 record of 12,000 absentee ballots mailed in one day.

Any Hoosier voter once again has the ability to request a judge extend voting hours on Election Day if there are polling place problems that require the extraordinary remedy.

"Indiana voters can now rest easier knowing that when they vote absentee by mail, their vote will be counted," said Barbara Bolling-Williams, Indiana NAACP president.

Hoosiers have their first opportunity to cast an in-person ballot for the general election when early voting sites open Tuesday in Northwest Indiana and throughout the state.

Hoosiers expecting to vote by mail in this year's general election still should plan to return their ballots no later than 12 p.m. on Election Day.