CROWN POINT — Some 15,000 absentee ballots requested by registered Lake County voters are set to be deposited in the mail by the end of the week.

According to county election officials, that will break the one-day record of 12,000 requested absentee ballots mailed in one day that was set during the 2008 general election.

Altogether, officials are expecting to mail upwards of 50,000 absentee ballots to Lake County voters who qualify to vote by mail and submit an electronic absentee ballot request through their registration record at IndianaVoters.com, or fill out and return the paper form available on the Indiana secretary of state's website.

They're also preparing for ballot counting to take longer than usual due to many voters opting for a mail-in ballot amid the COVID-19 pandemic, rather than casting an in-person absentee ballot beginning Oct. 6 at Lake County's 11 early voting sites, or voting at their precinct polling place on Nov. 3.

Michelle Fajman, director of the Lake County Board of Elections and Voter Registration, said she's scheduling ballot counters to work on Election Day, as well as the Wednesday and Thursday following the Tuesday election.

She said officials worked until 2 a.m. the next day counting the more than 30,000 mail-in ballots submitted for the June 2 primary election.

With 50,000 mail-in ballots expected for the general election, along with double the usual turnout compared to the primary, Fajman said voters should not be surprised if it takes an extra day or two to count all the ballots.

In close races, Fajman said the final outcome likely will not be known until the Election Board meets Nov. 12 to evaluate provisional ballots, including rejected absentee ballots, and to certify Lake County's election results to the state.

This year, however, there may be fewer rejected mail-in ballots thanks to a recent federal court ruling mandating all 92 Indiana counties alert voters if their absentee ballot is rejected due to a suspected mismatch between the voter's signature on the ballot envelope and the absentee ballot application.

Instead of being told after the election their vote didn't count — or never told at all — Indiana election officials now will contact voters within two days of a signature mismatch, and give them an opportunity to submit an affidavit explaining the discrepancy.

According to the secretary of state, ballots linked to affidavits satisfactorily completed within eight days of the election will be counted, while questioned ballots lacking a clarifying affidavit will be treated as provisional and not counted without further action by the voter.

Mail-in ballot signatures are evaluated by bipartisan election judges and their rulings reviewed by the Democratic and Republican members of the county election board. 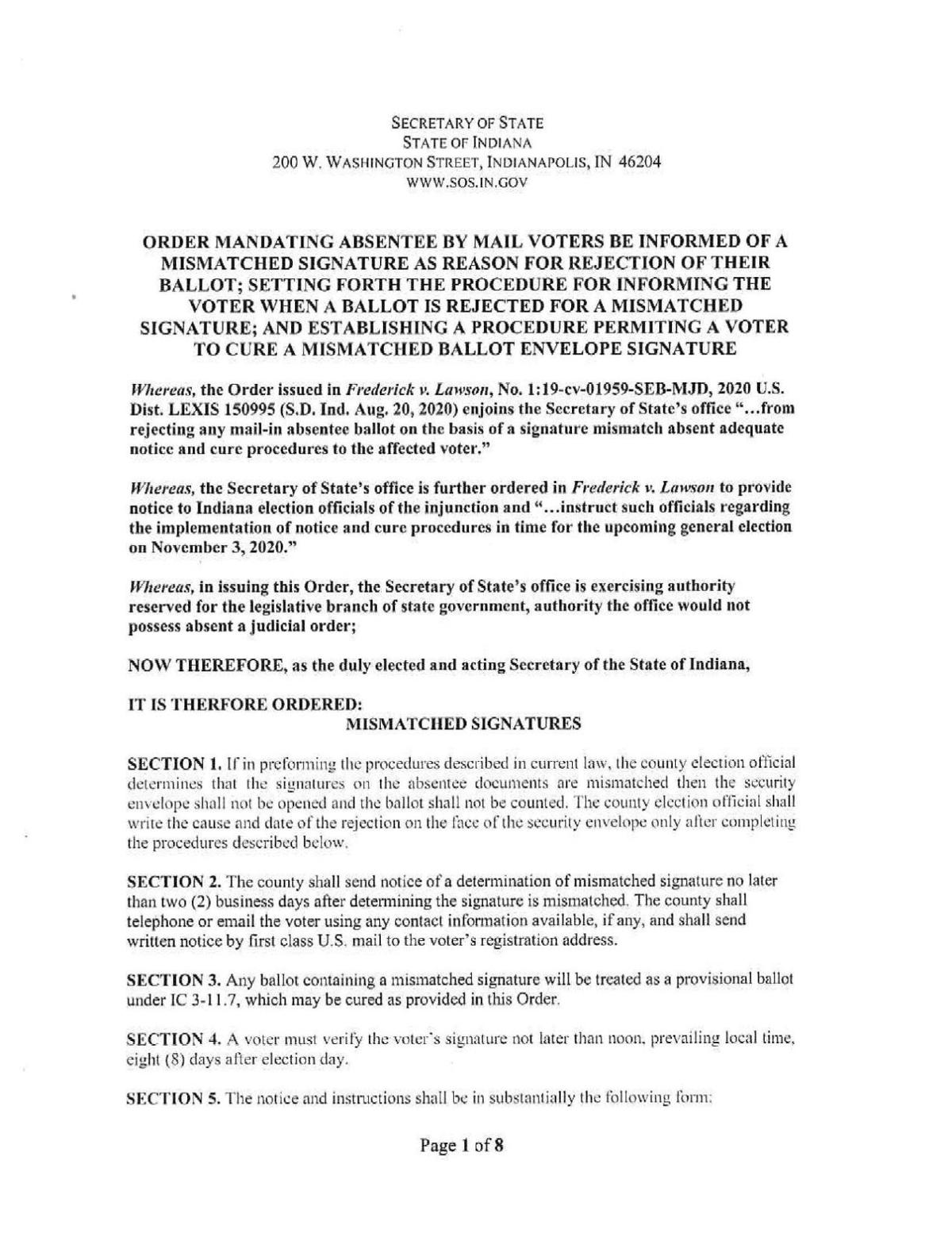 Hoosiers planning to vote in this year's general election must register by Oct. 5 to cast a ballot on or before Nov. 3.

Two court rulings will ensure Hoosier voters are less likely to have their mail-in absentee ballot rejected or find their voter registration purged without notice.

A federal judge has rejected a request to make mail-in balloting available to every registered Hoosier voter for the Nov. 3 general election.

The Indiana Supreme Court is encouraging Hoosier lawyers to serve as poll workers at the Nov. 3 general election.

The Indiana Department of Education "strongly supports an expansion of absentee or mail-in voting," according to a memo written by Jennifer McCormick, the Republican state superintendent of public instruction.

A Northwest Indiana state senator led an unsuccessful effort to authorize "no excuse" mail-in balloting for all Hoosier voters long before the coronavirus pandemic.

Gov. Eric Holcomb does not support making mail-in absentee voting available to all registered Indiana voters for the general election due to COVID-19.

Over 15,000 absentee ballots will be mailed out this weekend to voters registered in Lake County. This sets a record for most ballots sent out.

The Lake County Council has tentatively approved a $255 million spending plan for 2021. It includes a 3% pay raise for most county employees.

"Indiana voters can now rest easier knowing that when they vote absentee by mail, their vote will be counted," said Barbara Bolling-Williams, Indiana NAACP president.

Election officials in Lake, Porter and LaPorte counties are reporting record turnout at early voting sites, as well as an unprecedented number of mail-in absentee ballots going out to eligible voters.

Hoosiers not waiting to fulfill their civic duty by voting early, absentee

The first week of early voting in Indiana saw more than 144,000 Hoosiers, or 3% of all registered voters, cast their ballots for this year's general election.