Indiana's former chief elections officer and its next attorney general is urging the U.S. Supreme Court to toss out the votes of 20.4 million Americans in four states to help secure a second term for Republican President Donald Trump.

Republican Attorney General-elect Todd Rokita, a Munster native, announced his support Tuesday for a lawsuit filed by the state of Texas that seeks scuttle all the votes cast for president in Wisconsin, Michigan, Pennsylvania and Georgia, and to have the Republican-controlled legislatures in those states appoint Trump electors, instead of the Joe Biden electors chosen by the people.

Texas claims officials in all four states altered their election laws without legislative approval under the guise of the COVID-19 pandemic, triggering such rampant voter fraud, particularly with mail-in ballots, that the extraordinary remedy of throwing out every vote is required.

Records show the evidence for Texas' allegations has been summarily rejected by numerous federal courts and election officials in the four states, and indeed all 50 states, which have certified their election results notwithstanding Trump's continuing allegations of fraud.

Nevertheless, Rokita said millions of Indiana citizens "have deep concerns" about the presidential election, particularly as "some in the media and the political class simply try to sidestep legitimate issues raised about the election for the sake of expediency."

"Only the U.S. Supreme Court can settle this real controversy among the states," Rokita said. "Only by taking up this case and allowing a full and fair hearing of the facts will the Supreme Court help restore the confidence of the American people in our elections."

Rokita also called on outgoing Republican Attorney General Curtis Hill to join Indiana to Texas' lawsuit because "our voters are damaged if other states conducted their elections unconstitutionally."

Notably, neither Rokita nor Hill challenged Republican Gov. Eric Holcomb when he unilaterally changed the statutory date of Indiana's primary election to June 2 from May 5, or sued the Indiana Election Commission when it made "no excuse" mail-in balloting available to every primary voter due to COVID-19.

"The erosion of confidence in our democratic system isn't attributable to the good people of Michigan, Wisconsin, Georgia or Pennsylvania but rather to partisan officials, like Mr. Paxton, who place loyalty to a person over loyalty to their country," Nessel said. 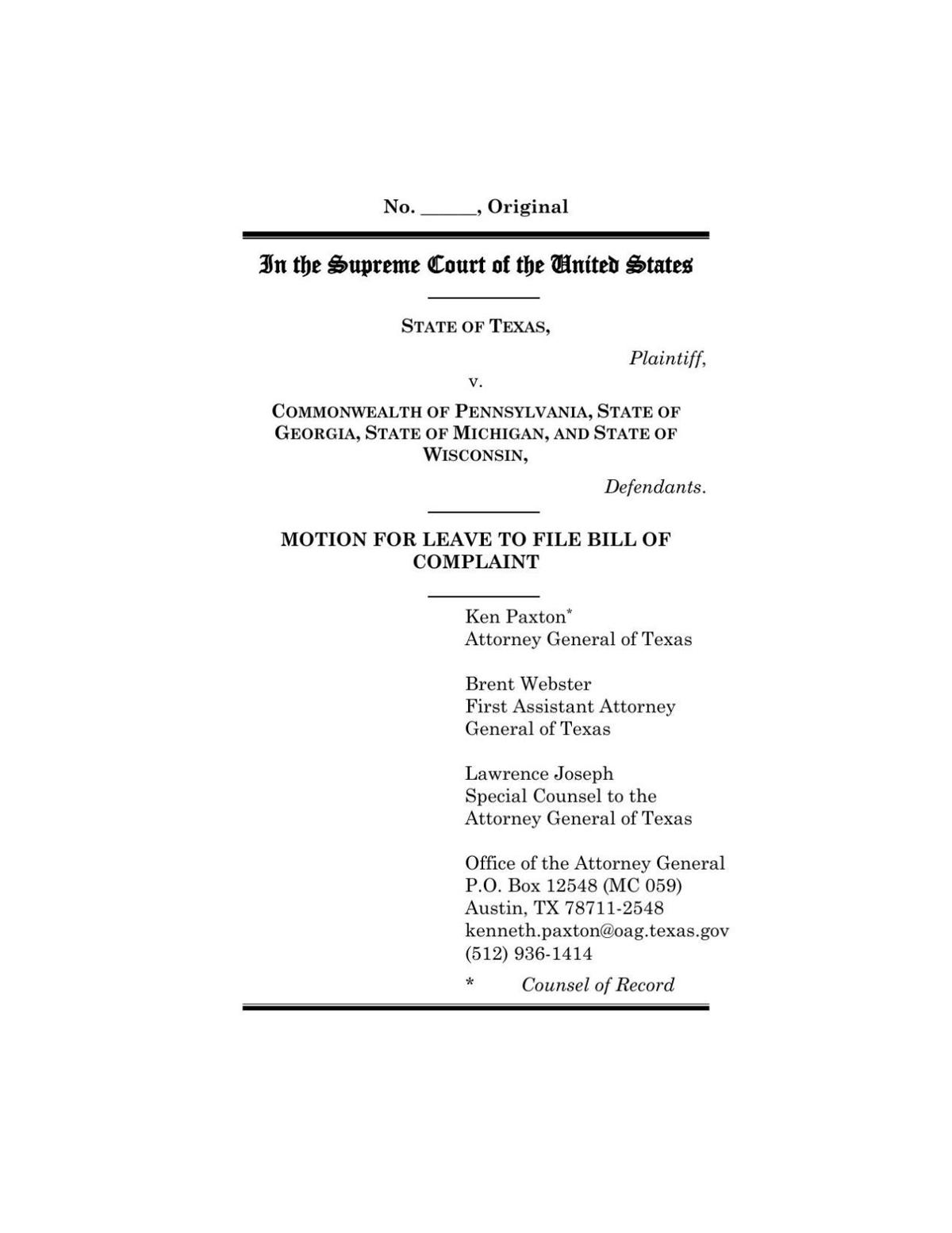 Sen. Mike Braun claimed "the media" has "fundamentally failed the American people" by neglecting to investigate every single claim of voter fraud, legitimate or not, made by any American, anywhere.

Attorney General Curtis Hill Jr. is defending his decision to use Indiana taxpayer resources to intervene in a Pennsylvania mail-in ballot lawsuit

"They're using state government resources for this political effort," said John P. Bushemi, a state and local government attorney. "This is a misappropriation of state of Indiana taxpayer funds."

Attorney General Curtis Hill announced Tuesday he's joined the state to a lawsuit that claims the Pennsylvania Supreme Court unlawfully extended the deadline for mail-in ballots to be received.

Indiana Attorney General Curtis Hill is urging the U.S. Supreme Court to consider an unprecedented lawsuit filed by Texas that seeks to overturn the results of the presidential election.

A Schererville woman will make history today when she joins 537 other Americans in all 50 states and Washington, D.C. to officially elect the next president of the United States.

Holcomb confident nation will get through presidential election dispute

"By the way, no one in D.C. cares what I think anyway about this issue. I have no influence by design of our system," Holcomb said.

"At this moment — our moment — even knowing full well the awful toll of COVID-19, and acknowledging that we are still in its deadly grip, it's important to now look to the future," Holcomb said.

Republican Todd Rokita is vowing to use his new position as Indiana attorney general to take on major technology companies, in part to vindicate President Donald Trump.

“If I can get to work and to the grocery store and everywhere else, I can stop on the way home and vote,” said Rep. Matt Lehman, R-Berne.

Republican Attorney General Todd Rokita tweeted from his campaign account on Valentine’s Day an image of Trump with the message: “You stole my heart like a 2020 election.”