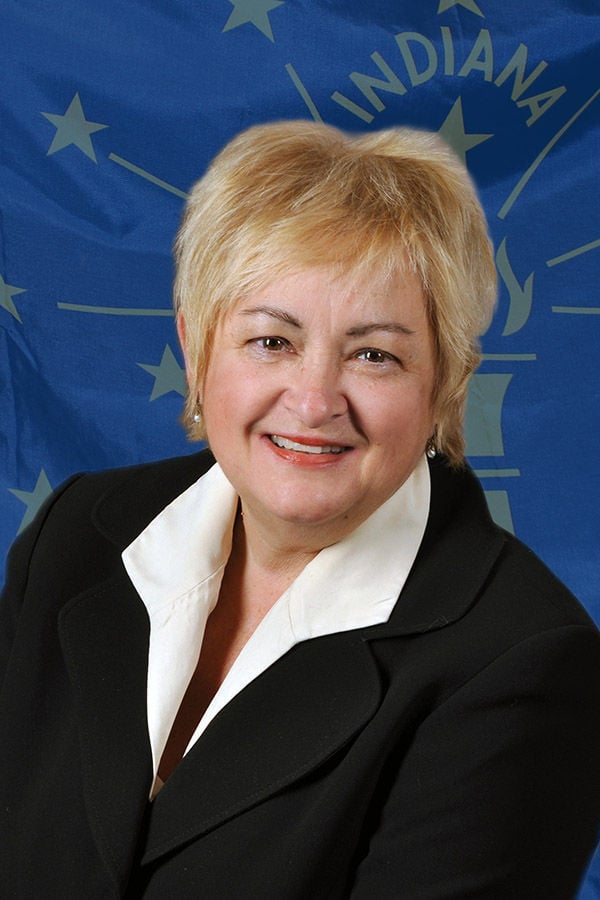 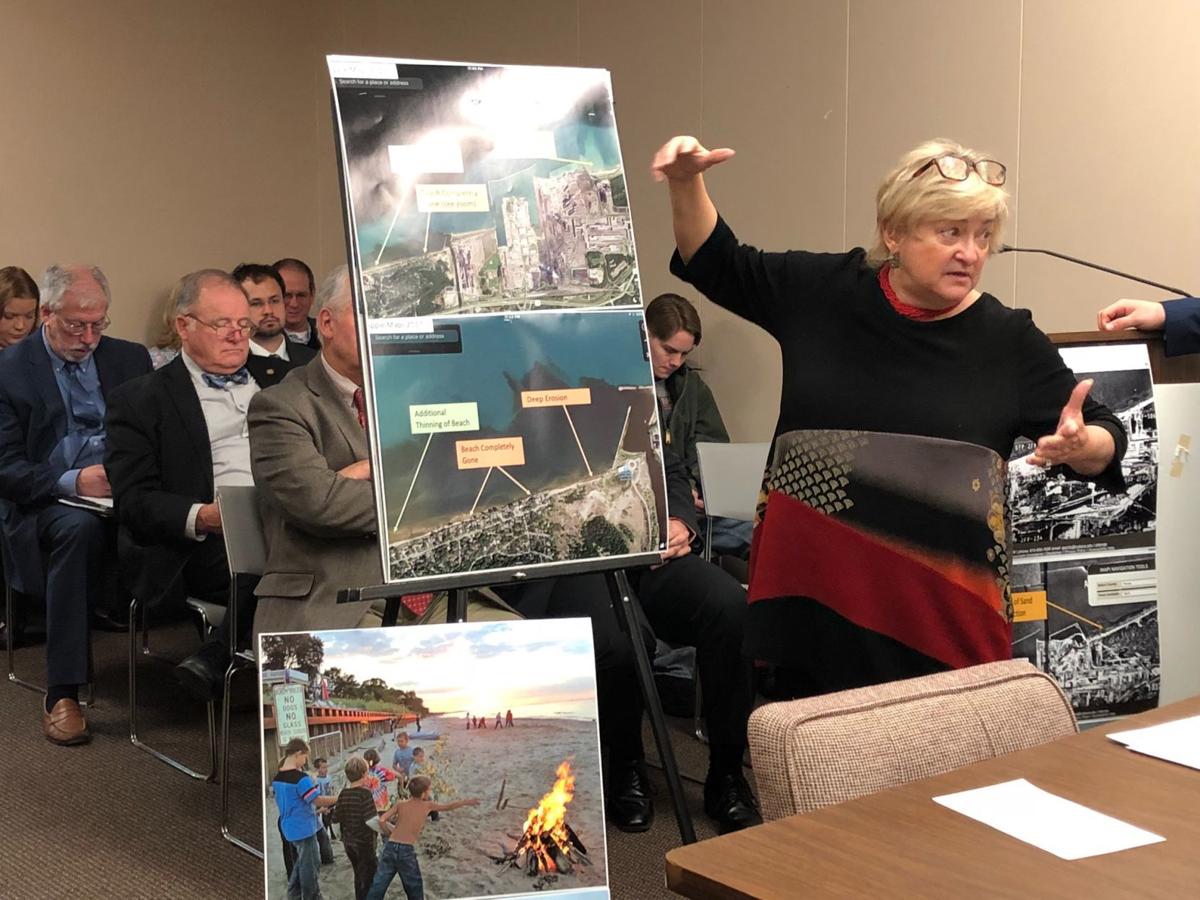 State Sen. Karen Tallian, D-Ogden Dunes, uses a variety of photos and charts to show the House Natural Resources Committee in 2018 how Northwest Indiana's Lake Michigan beaches have eroded due to man-made lake structures altering the water flow. She is co-sponsor of Senate Bill 178 which would require clean sand dredged from those structures be deposited on the beach, instead of off-shore.

In an exclusive interview with The Times, Tallian said she believes the state’s Republican-dominated government is crying out for partisan balance, and her experience both as a lawyer and lawmaker “could very well be the balance needed.”

“We have had a one-party trifecta for the last decade, and no one has been there in a position of authority to really be able to do anything about that,” Tallian said.

“We make our arguments in the Legislature, but they often go unheard. The attorney general's office has authority to do a lot of things.”

Specifically, the Valparaiso University Law School graduate said she would focus as attorney general on enhancing the office’s Medicaid fraud and senior citizen abuse investigations, go after charter schools that take taxpayer funds without educating students, and launch a payroll fraud unit to protect Hoosier workers who are misclassified as independent contractors or paid under the table.

Tallian also would remove Indiana from a pending federal lawsuit — championed by Republican Attorney General Curtis Hill Jr. — that seeks to declare unconstitutional the entire Affordable Care Act, which, if successful, once again would permit discrimination based on preexisting health conditions and eliminate significant federal funding for the Healthy Indiana Plan that covers more than 400,000 Hoosiers.

“It's just not right that our attorney general, who is supposed to be an advocate for citizens, is actively playing in a right-wing pursuit to get rid of health care,” Tallian said.

"Nationally, the Democratic attorneys general are fighting this, and I hope to be one of them. We need to keep health care for preexisting conditions, we need to keep it affordable, and we need to keep the Healthy Indiana Plan — which was a Republican program.”

Along that same line, Tallian said she would take an active role as attorney general in discouraging the General Assembly from enacting clearly unconstitutional legislation, as it repeatedly has over the past decade to limit access to abortion and other reproductive health care for women.

The Portage-based lawyer noted that Indiana has paid millions of dollars in attorney fees to the American Civil Liberties Union following their successful constitutional challenges to Indiana’s abortion laws; money that could have been put to better use directly helping Hoosiers.

"The attorney general can give the Legislature opinions about the language and what they're doing and is this proposal legit,” Tallian said. “In my years there, they have not done that, and I assume the reason is because the attorney general has always been the same party."

Tallian acknowledged that the Republican-controlled House and Senate could ignore her advice.

But they would do so at their own peril, since it would be clear from the get-go that the state’s own attorney believes what they’re passing is unconstitutional, she said.

“As an attorney, I've always been giving the other side of some argument. You learn early that there are two sides to every story,” Tallian said. "Running for attorney general to me is the next step in being an advocate for the other side."

Tallian also dismissed the possibility that, if she’s elected, the Legislature will make the attorney general a governor-appointed post, as it recently did with the state superintendent of public instruction, or eliminate the office altogether, since it only is created in statute, not by the Indiana Constitution.

"To get rid of the attorney general as an elected position would be a really risky move for any party,” Tallian said. "First of all, what goes around comes around, and we're not guaranteed that we'll have a Republican governor until the end of time."

Tallian though only has known Republican governors since first being elected to the Indiana Senate in 2005, following the resignation of state Sen. Rose Ann Antich-Carr, D-Merrillville.

She briefly ran for the Democratic gubernatorial nomination in 2016, but Tallian perhaps is best known for her efforts to legalize marijuana in Indiana — notwithstanding the opposition of Govs. Mitch Daniels, Mike Pence and Eric Holcomb.

Tallian said she would continue that work as attorney general by offering informed legal guidance on marijuana issues, instead of following Hill’s line that all marijuana is illegal and that’s that.

But health care and marijuana aren’t the only issues where she disagrees with the incumbent officeholder.

She thinks Hill has been ignoring Hoosiers to play in national politics, including his repeated White House visits to hobnob with President Donald Trump.

"Looking back at some of Curtis Hill's 2016 election material and websites, it seems clear to me now that he certainly sold himself as much more middle of the road than his positions have shown him to be,” Tallian said.

"He appears to be promoting an extreme right-wing agenda and using the office to do that."

At the same time, Tallian said she stands with the four women, including state Rep. Mara Candelaria Reardon, D-Munster, who have accused Hill of touching them on their backs or buttocks without consent during a 2018 legislative party, and Tallian believes Hill’s alleged behavior — which he continues to deny — has “tainted the integrity of the office.”

Tallian insisted, however, that she’s not running specifically to oust Hill, who Holcomb and GOP legislative leaders urged to resign following the groping allegations.

Hill also is the subject of a pending disciplinary complaint before the Indiana Supreme Court that could result in the temporary or permanent suspension of his law license.

"He may not even be the attorney general by the time this race happens in November 2020. But I am running on my own record,” Tallian said.

Tallian contends that next year is a unique opportunity to put before Hoosier voters the issues she believes the attorney general’s office should be addressing, without the distraction of a big U.S. Senate or state schools chief race on the ballot.

“I have a lot of things to say about the AG's office in particular, and I'm not going to make this as a side note to a governor's race. I plan on making this a focused fight for that office,” Tallian said. "I think I can win."

To win, Tallian first will need to claim the Democratic nomination at the party’s June 13, 2020, state convention. She so far is running unopposed.

The last Democrat to serve as Indiana attorney general was Gary Mayor Karen Freeman-Wilson, who was appointed in 2000 by Gov. Frank O’Bannon to complete the term of Jeff Modisett.

In 2016, Hill defeated now-Lake County Clerk Lorenzo Arredondo 62% to 38% in a race that got little attention that year amid open-seat contests for president, governor and U.S. senator.

INDIANAPOLIS — An innocent person wrongfully convicted of a crime in Indiana, and forced to serve time behind bars, is entitled to compensatio…

INDIANAPOLIS — Hoosiers should feel free in the warm months ahead to use the beaches along Lake Michigan as they always have.

INDIANAPOLIS — The Hoosier State finally is enacting a bias crime statute, becoming the 46th state to do so, following more than three decades…

Indiana Attorney General Curtis Hill Jr. is asking a federal court to dismiss the sexual harassment lawsuits filed last month against him and …

INDIANAPOLIS — The attorney discipline process that could force Attorney General Curtis Hill Jr. out of office is moving forward with an exper…

INDIANAPOLIS — Indiana Gov. Eric Holcomb said he's "disgusted" by inappropriate text messages that the No. 2 official at the state's troubled …

The state's most populous county no longer will prosecute adults who are arrested for possessing up to 1 ounce of marijuana.

Getting with the times on pot or thumbing nose at state law? Lake County mulls tickets, not jail

The Lake County Council is crafting a plan for police to ticket and fine individuals caught with small amounts of marijuana, rather than arresting and hauling them off to jail.

Plan to decriminalize marijuana possession may be considered by Indiana Senate

The Democratic candidates for Indiana attorney general expect to post six-digit fundraising totals this week, while a second Republican announced Monday he is challenging Attorney General Curtis Hill Jr. for the GOP nomination.

The council is still is working on its plan to issue civil fines, similar to traffic tickets, for marijuana possession to individuals arrested for possessing marijuana purchased legally in Illinois or Michigan.

A proposed new law would allow the AG, or a special prosecutor appointed by him, to file charges and prosecute any criminal law that the local, elected prosecutor is declining to enforce.

State Sen. Karen Tallian, D-Ogden Dunes, is hosting town hall meetings this Saturday and next in Porter and LaPorte counties.

State Sen. Karen Tallian, D-Ogden Dunes, is the most competitive candidate Hoosier Democrats could nominate for Indiana attorney general, according to a new poll.

The Democratic candidates for Indiana attorney general pleaded their cases Thursday for why they deserve the party's nomination.

State Sen. Karen Tallian, D-Ogden Dunes, will continue fighting for issues she's championed over 14 years in the Statehouse, even if it's not from the attorney general's office.

State Sen. Karen Tallian, D-Ogden Dunes, uses a variety of photos and charts to show the House Natural Resources Committee in 2018 how Northwest Indiana's Lake Michigan beaches have eroded due to man-made lake structures altering the water flow. She is co-sponsor of Senate Bill 178 which would require clean sand dredged from those structures be deposited on the beach, instead of off-shore.