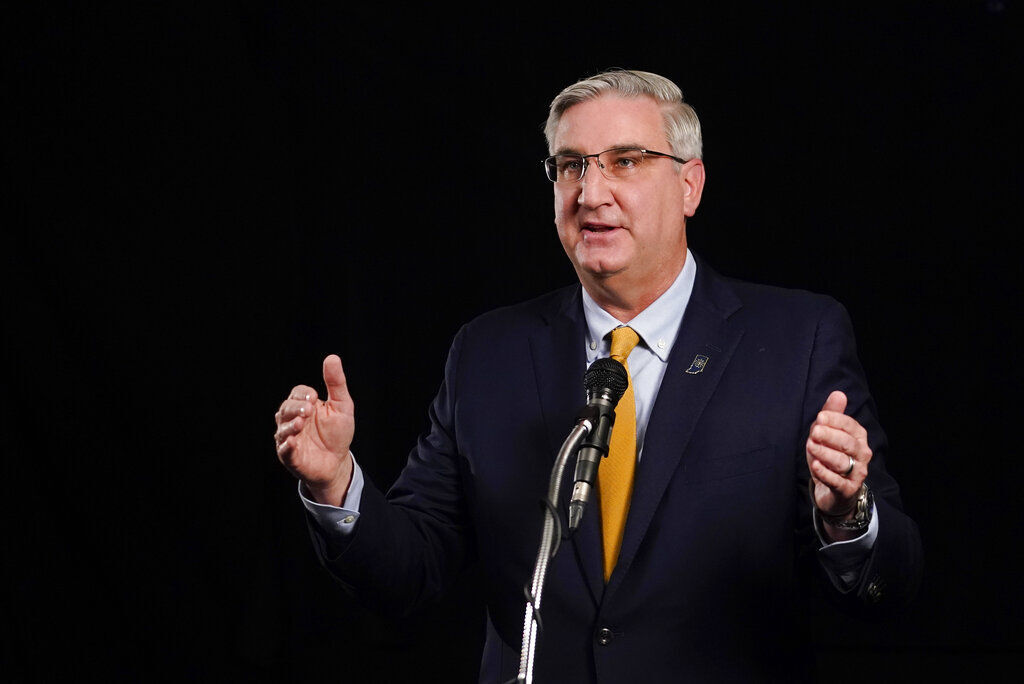 Indiana Republican Gov. Eric Holcomb participates in the Indiana Gubernatorial debate with Democrat Woody Myers and Libertarian Donald Rainwater on Tuesday in Indianapolis. The candidates were in separate studios to allow for social distancing guidelines. 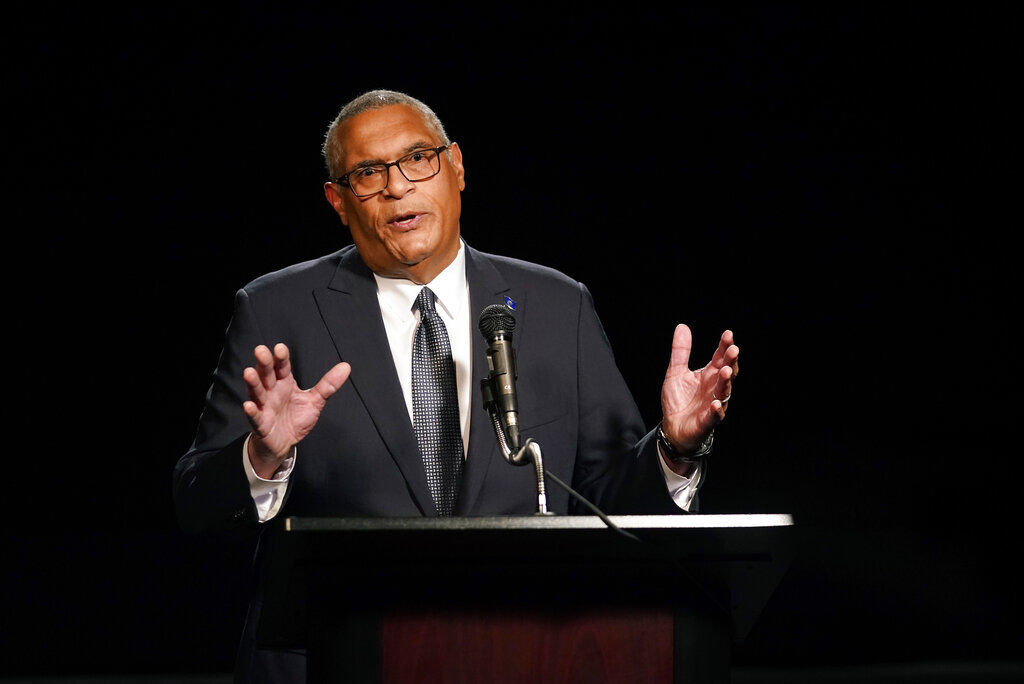 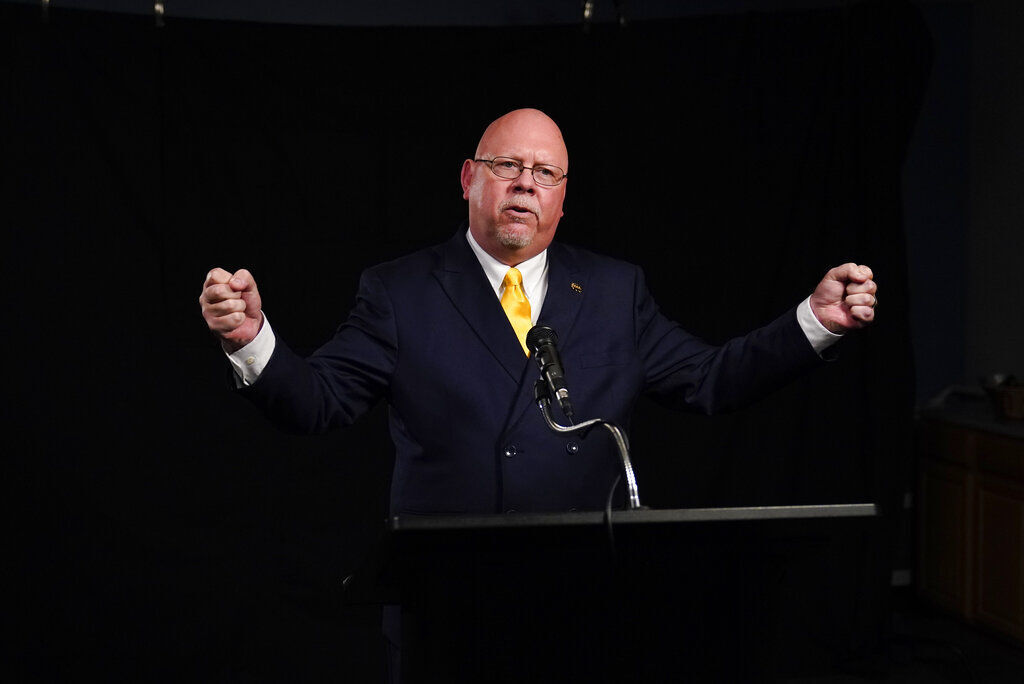 The Democratic and Libertarian candidates for Indiana governor attempted to persuade Hoosier voters Tuesday night that 16 consecutive years of Republican rule in the governor's office is long enough.

Republican Gov. Eric Holcomb, meanwhile, worked to stay above the fray in the second and final gubernatorial debate by promising to maintain a pro-growth economy, with focused investments in Hoosier job skills and the state's infrastructure, if he wins a second term at the Nov. 3 election.

The debate, at times, turned testy — or as testy as it could get with the three candidates in separate rooms of a television studio as a COVID-19 precaution — particularly when Holcomb described the various officials he's appointed or commissions he's created to help tackle pressing state issues, such as "skilling up" workers, rural broadband, racial inequality and Department of Child Services issues.

Donald Rainwater, the Libertarian candidate, even went so far as to liken Holcomb to Vermont U.S. Sen. Bernie Sanders, a self-described Democratic Socialist, based on Holcomb's unceasing embrace of "big government" solutions to all of Indiana's problems.

"He talks about skilling up, what he's really talking about is very Bernie Sanders-esque style of college for all, paid for by the state — and I don't think that's the answer," Rainwater said. "You need to ask yourself, as a Hoosier, am I getting better economically? Is what the governor is talking about helping me personally and my family?"

Dr. Woody Myers, the Democratic nominee, avoided personal attacks on Holcomb but repeatedly emphasized the urgent need for "change" in every facet of state government.

"One of the reasons why we aren't making the progress that we need to make is because we fund our public health infrastructure per capita at a level of 48th worst in the nation. All of that needs to change," Myers said. "I just know that we can do a much better job for the mothers and the babies. This is 2020! It's time for us to just get off the dime and get this fixed. Other states have succeeded. Why not Indiana?"

Rainwater and Myers also both condemned Holcomb's continued insistence that Indiana cannot legalize medicinal or recreational marijuana because marijuana is classified as a prohibited controlled substance by the federal government.

The Libertarian said Holcomb needs to embrace the state's rights provisions of the U.S. Constitution and ignore the federal government, while the Democrat pointed out all of Indiana's neighboring states allow marijuana use and the Hoosier State is missing out jobs and tax revenue that would come with a legal cannabis industry.

"It is time to decriminalize simple possession of cannabis in the state of Indiana," Myers said. "It makes no sense to be on the border between Indiana and Illinois and walk across the border and become a criminal."

On the other hand, Holcomb staked the strongest position when moderator Nadia Brown, Purdue University associate professor of political science and African American studies, asked whether all of Indiana should be in a single time zone and the 2006 adoption of daylight saving time reconsidered.

"I think this has been settled. I had no gray hair before we did the first go around," quipped Holcomb, who was a top aide to Republican Gov. Mitch Daniels during the contentious daylight saving time debate in the Republican-controlled General Assembly.

Ultimately, Holcomb said his top priorities are to maintain a "positive" and "solutions-oriented" focus as governor — "based on a foundation of civility" — that prepares Hoosiers to respond to an uncertain future with the skills they'll need to succeed.

"The scale and pace of change due to technology is faster than it has ever been. I look forward to another four years," Holcomb said.

Gov. Eric Holcomb was pummeled from the left and right during a debate Tuesday night for his response to the COVID-19 pandemic.

Gov. Eric Holcomb is confident Indiana can remain operating at Stage 5 of his five-stage Back on Track reopening plan if Hoosiers continue following coronavirus mitigation strategies.

The poll found Republican President Donald Trump is the choice of 49% of likely Indiana voters while 42% favor former Vice President Joe Biden, the Democratic nominee, and 6% are undecided.

Gov. Eric Holcomb is in the catbird seat in this year's largely under the radar campaign for Indiana governor.

Indiana gubernatorial candidates focus on disability issues with Everybody Counts

Addressing the needs of disabled Hoosiers will be a top priority for the Democratic candidates for Indiana governor and lieutenant governor if they are elected Nov. 3.

"You deserve better" is the crux of Dr. Woody Myers' message to Hoosier teachers in the Democrat's campaign for Indiana governor.

The governor will sign an executive order moving the state to Stage 5 of Indiana's five-stage Back on Track reopening plan for at least a three-week period, beginning at 11:01 p.m. Friday in Northwest Indiana.

Gov. Eric Holcomb is highlighting the Hoosier unity spurred by COVID-19 in the first television ad of Indiana's 2020 gubernatorial contest.

Sustained education funding, inclusivity and bridging the digital divide top the state superintendent's priorities shared with legislators for the 2021 session.

Indiana's Republican chief executive said Wednesday he believes the sooner the ballots are counted the better, but every ballot that qualifies to be counted must be counted.

The Democratic nominee for Indiana attorney general has a plan to boost funding for public education and improve the state's criminal justice system: legalize marijuana.

If Gov. Eric Holcomb wins a second term in Tuesday's general election he will have prevailed in two of the most unusual political campaigns in Indiana history.

The man who has guided Indiana through the first eight months of the coronavirus pandemic will continue leading the state in the months and years ahead.

The governor said in all counties businesses open to the public soon will be directed to post signs on their doors informing customers and employees face masks must be worn on the premises.

Indiana Republican Gov. Eric Holcomb participates in the Indiana Gubernatorial debate with Democrat Woody Myers and Libertarian Donald Rainwater on Tuesday in Indianapolis. The candidates were in separate studios to allow for social distancing guidelines.