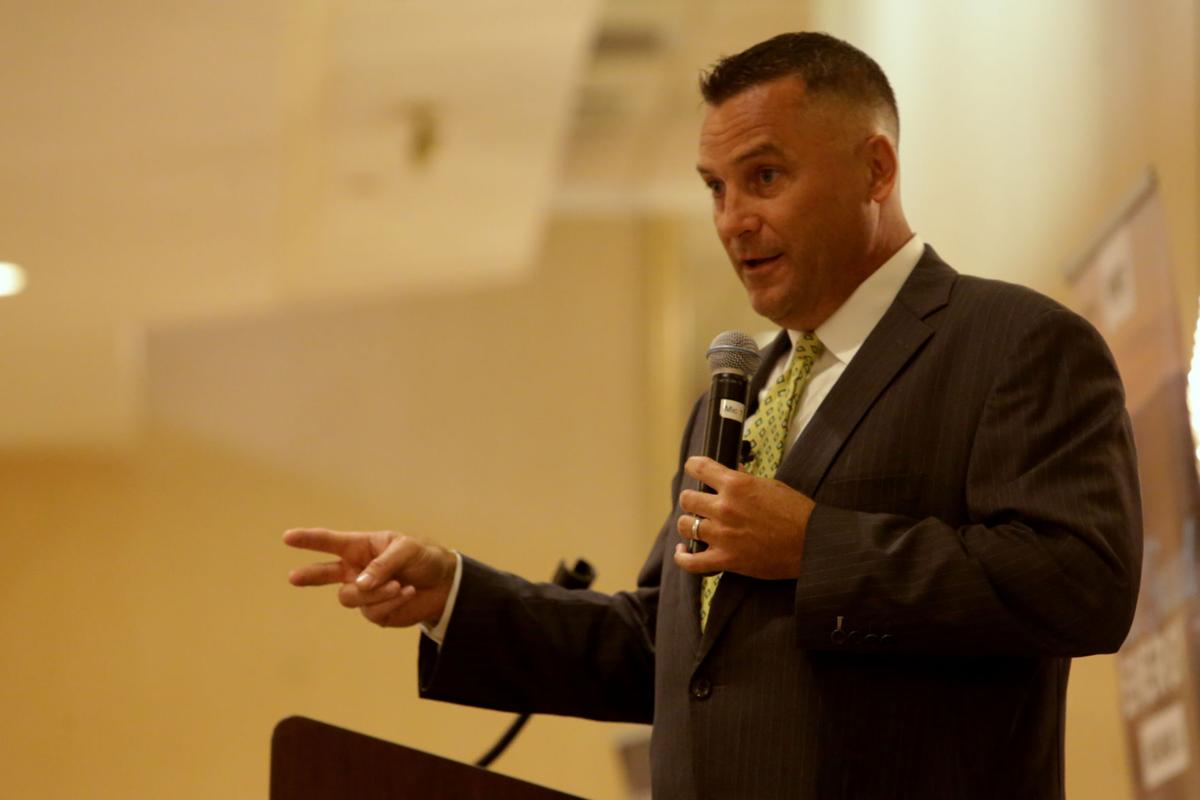 Mayor Thomas McDermott Jr. talks about bringing new business strategies for Hammond during the 17th State of the City address on Thursday. 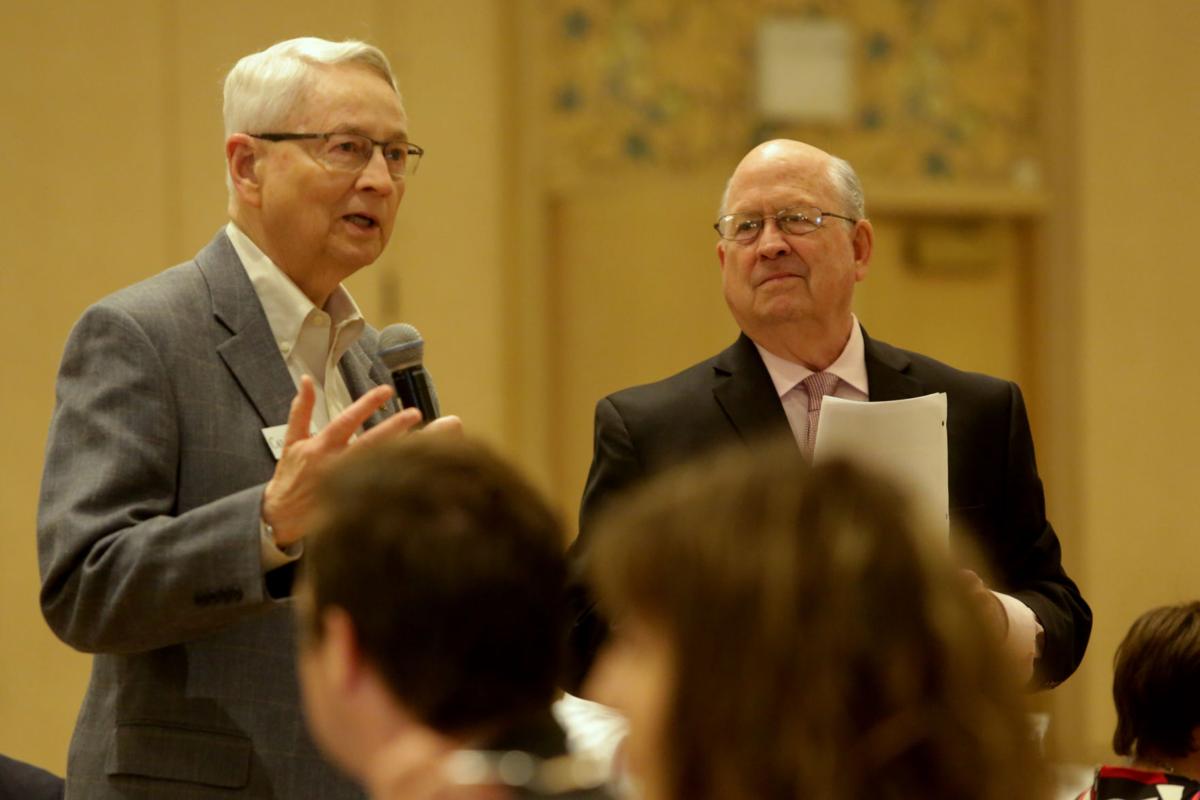 Dave Ryan, right, hands Cal Bellamy a microphone to ask the mayor a question on Thursday during the State of the City address. 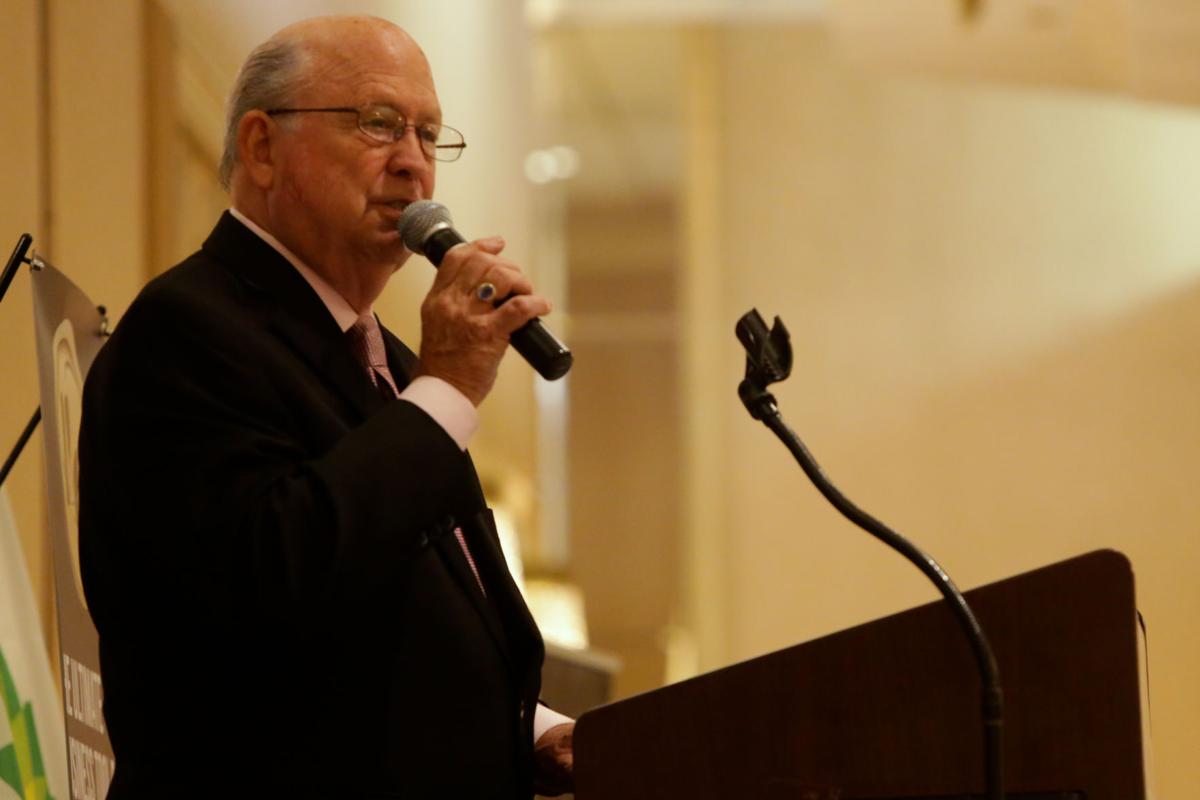 Dave Ryan, executive director of the Lakeshore Chamber of Commerce, opens the State of the City Address on Thursday in Hammond. 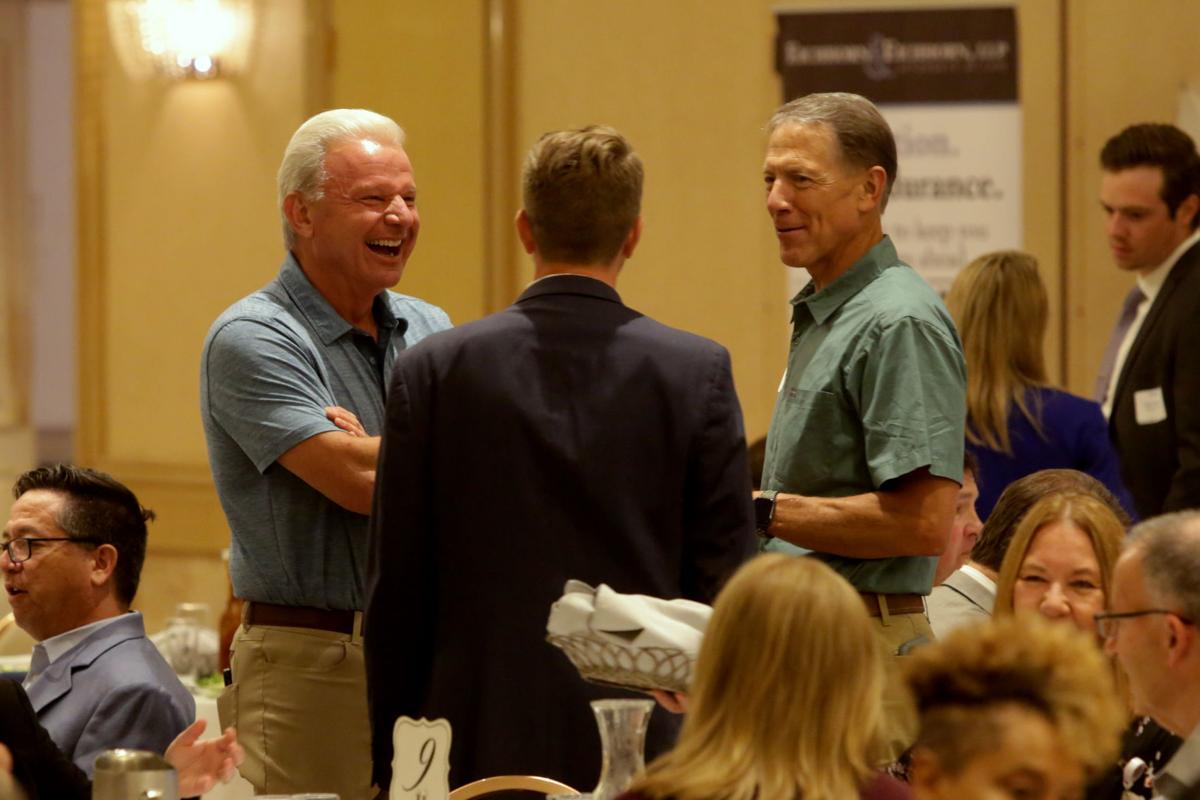 A lunch was provided prior to the 17th State of the City Address at the Dynasty Banquet Center on Thursday in Hammond. 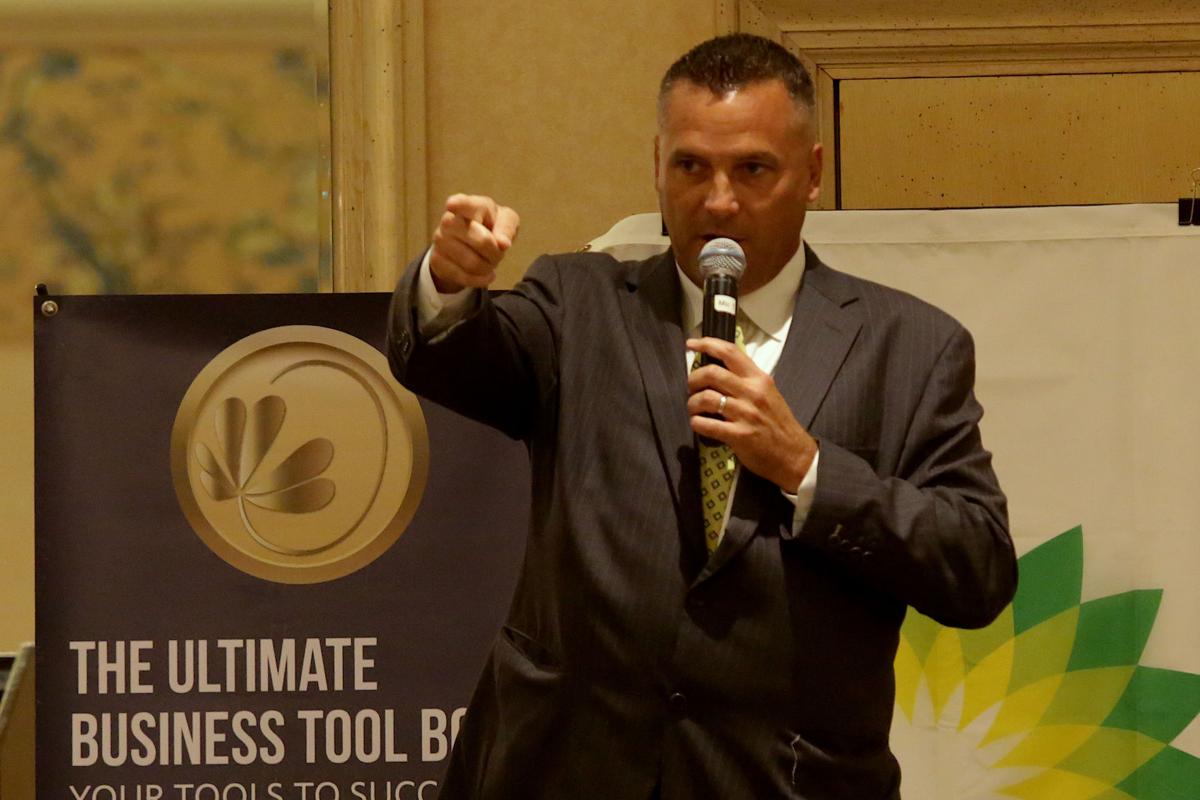 Mayor Thomas McDermott points to the crowd during his State of the City Address on Thursday. 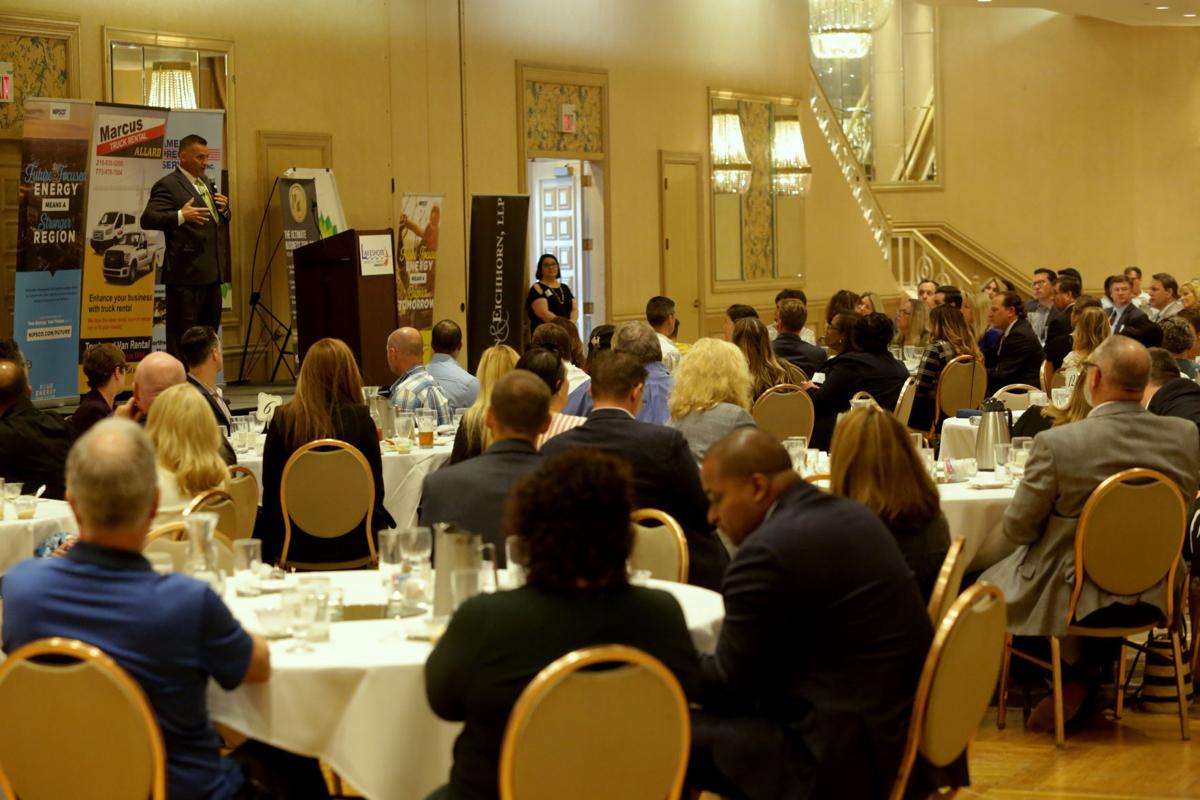 The Lakeshore Chamber of Commerce held the 17th State of the City Address at Dynasty Banquet Center on Thursday in Hammond.

In a few months, work at Oxbow Landing will be complete, Hammond Mayor Thomas McDermott Jr. said Thursday during his 17th State of the City address with the Lakeshore Chamber of Commerce.

Located along an oxbow on the Little Calumet River, the development was once home to the crime-ridden River Park Apartments.

Promising to demolish the apartments is what helped McDermott win his bid to become mayor in 2004, he said.

And he did just that.

In 2004, the city spent $20 million to purchase and tear down River Park Apartments. Since then, the mixed-use development has become home to two hotels, two "first-class" commercial buildings, Byway Brewing and Buffalo Wild Wings.

A new $8 million hotel and another office building are planned for Oxbow Landing, which will take up the rest of the space in the development, McDermott has said previously.

"We spent $20 million on a project that's worth three times that right now, and it's only going to get better because we have one more building coming and one more hotel coming," McDermott said Thursday.

"I'm very lucky that I got to watch that project from beginning to end. There's not many mayors that start a project and see it done in their term."

The city also is looking to wrap up development on the old Woodmar Mall site.

In May, the city and Crossroads YMCA announced plans to build a $45 million "destination" YMCA on the former mall site.

"The Dean and Barbara White Foundation and their family is a godsend to the city of Hammond, and I appreciate them," McDermott said. "I don't need to get into specifics, but these were dark times when I was dealing with some tough issues for downtown Hammond, and along comes this gift from heaven: $25 million for a new $45 million facility.”

The new YMCA is slated to open in 2024, and the city's current YMCA at 7322 Southeastern Ave. is set to be repurposed.

Next door, the Challenger Learning Center is looking to call the old Walmart home by creating a "destination-oriented," location, "almost like a children's museum in a way," Hammond Chief of Staff Phil Taillon said Thursday.

McDermott noted similar to the Oxbow Landing development, the Woodmar Mall won't have any room left with the new YMCA and relocated Challenger Learning Center.

But the city isn't stopping there, McDermott said.

"We always have another project," he said. "Downtown Hammond is a big focus, obviously, with what's going on right now. That's one that's going to take a while, but we're going to get there because we're tenacious, and we grind it out."

A new downtown master plan for the city calls for a variety of new property uses, including mixed-use buildings that usually feature retail spaces on the ground floor with residential units above.

That's the plan for the old Calumet bank building, which is at the heart of the reimagined Hohman Avenue corridor and within a proposed transit development district around the future Hammond Gateway commuter railroad station.

Anne Anderson, Hammond's economic development director, said an adaptive reuse is planned for the building, which will include 7,000 square feet of retail space in the building's lobby and 100 residential units above it.

Some work will begin this fall, with most of the work occurring in 2022, Anderson said.

The $24 million project recently was awarded $5 million in redevelopment tax credits from the state, Anderson said, noting it is one of three residential projects planned for downtown Hammond.

Similar to its plans for downtown Hammond, the city also is looking to transform downtown Hessville by taking traffic down to one lane in each direction, creating more parking and making the area more walkable, McDermott said.

The project is slated to be bid out this fall, and will be funded, in part, by dollars from the American Rescue Plan, McDermott said.

The city also is looking to redevelop both Clark and Gavit high schools, which closed this year after the School City of Hammond moved to consolidate schools in the district.

Those projects are being snarled by a state law that allows charter schools to purchase unused school buildings from Indiana districts for $1, McDermott said.

McDermott noted the city also is looking to erect a decorative shield with a Hammond Marina District theme near the northern state line border.

"The first thing you see is railroad tracks and trains parked, and it's just ugly," the longtime mayor said, and later added, "We want to make a positive impression, and let's face it, Horseshoe Casino is the biggest tourist draw we have in Northwest Indiana, certainly in Hammond."

The city's Blue Net system initially began as a license plate reader (LPR) initiative in 2017. The program has since expanded to include video in parks, at intersections and high-traffic areas.

"That's the only real attack I've heard on this proposal is the misconception that Hammond residents are getting screwed, which is ridiculous," Hammond Mayor Thomas McDermott Jr. said.

Busta Rhymes and Nelly will co-headline the festival on July 14 after The O'Jays had to cancel, as the lead singer is dealing with a health issue.

The facility on 165th Street has 38 exam rooms and also offers mammography, ultrasounds, X-rays and on Saturdays, urgent care.

Dozens, including city officials from Hammond and neighboring Illinois communities, gathered in front of the Hammond Police Department in protest of Franciscan Health hospital in Hammond downsizing.

The Crossroads YMCA is set to build a $45 million destination YMCA at the former site of the Woodmar Mall/Carson Pirie Scott next to the Hammond Sportsplex.

McDermott said the final project will be a 14,000-square-foot, class-A office building, which will have three floors and feature a terraced roof.

Work to begin on reimagined downtown Hammond this spring

The plan is set to slow down downtown traffic, and will reconstruct Hohman Avenue to make the street a public space, said Jeff Speck, the urban planner who led the city's downtown master plan team.

Mayor Thomas McDermott Jr. talks about bringing new business strategies for Hammond during the 17th State of the City address on Thursday.

Dave Ryan, right, hands Cal Bellamy a microphone to ask the mayor a question on Thursday during the State of the City address.

Dave Ryan, executive director of the Lakeshore Chamber of Commerce, opens the State of the City Address on Thursday in Hammond.

A lunch was provided prior to the 17th State of the City Address at the Dynasty Banquet Center on Thursday in Hammond.

Mayor Thomas McDermott points to the crowd during his State of the City Address on Thursday.

The Lakeshore Chamber of Commerce held the 17th State of the City Address at Dynasty Banquet Center on Thursday in Hammond.