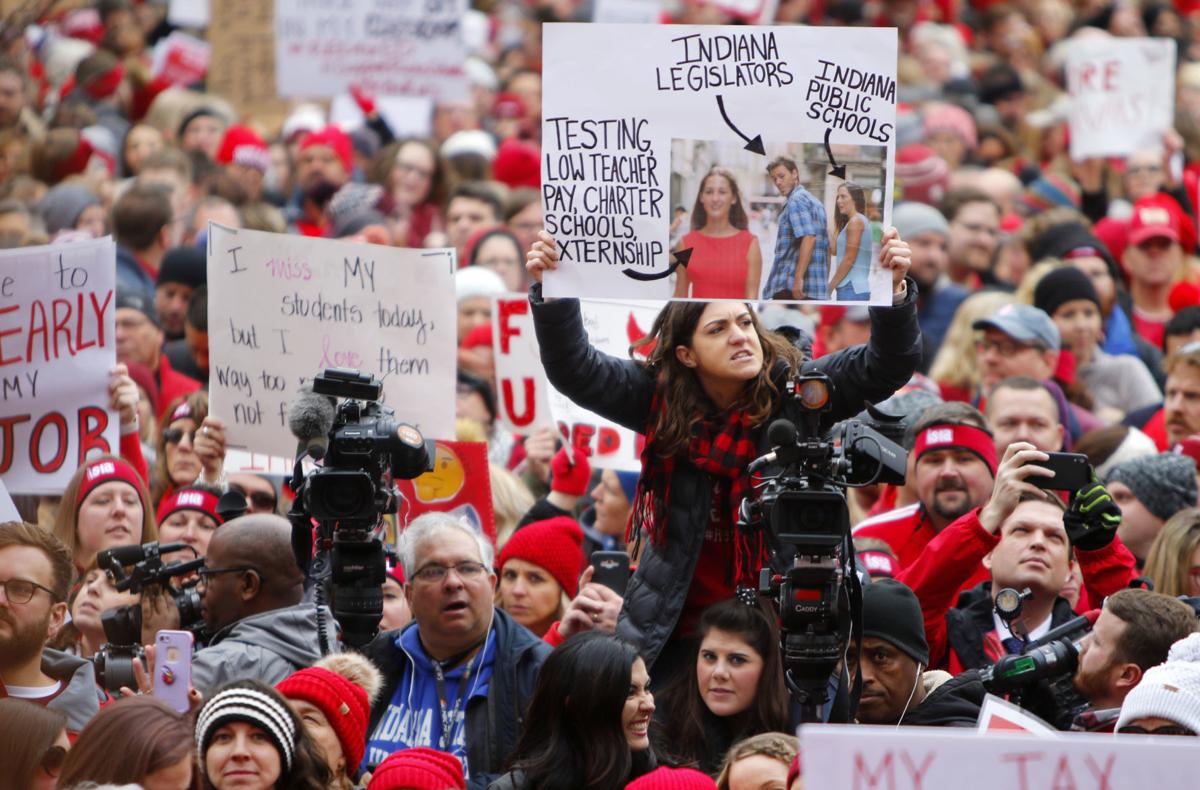 Educators and supporters hoist their custom signs during a November Red for Ed Action Day rally outside the Indiana Statehouse in Indianapolis. 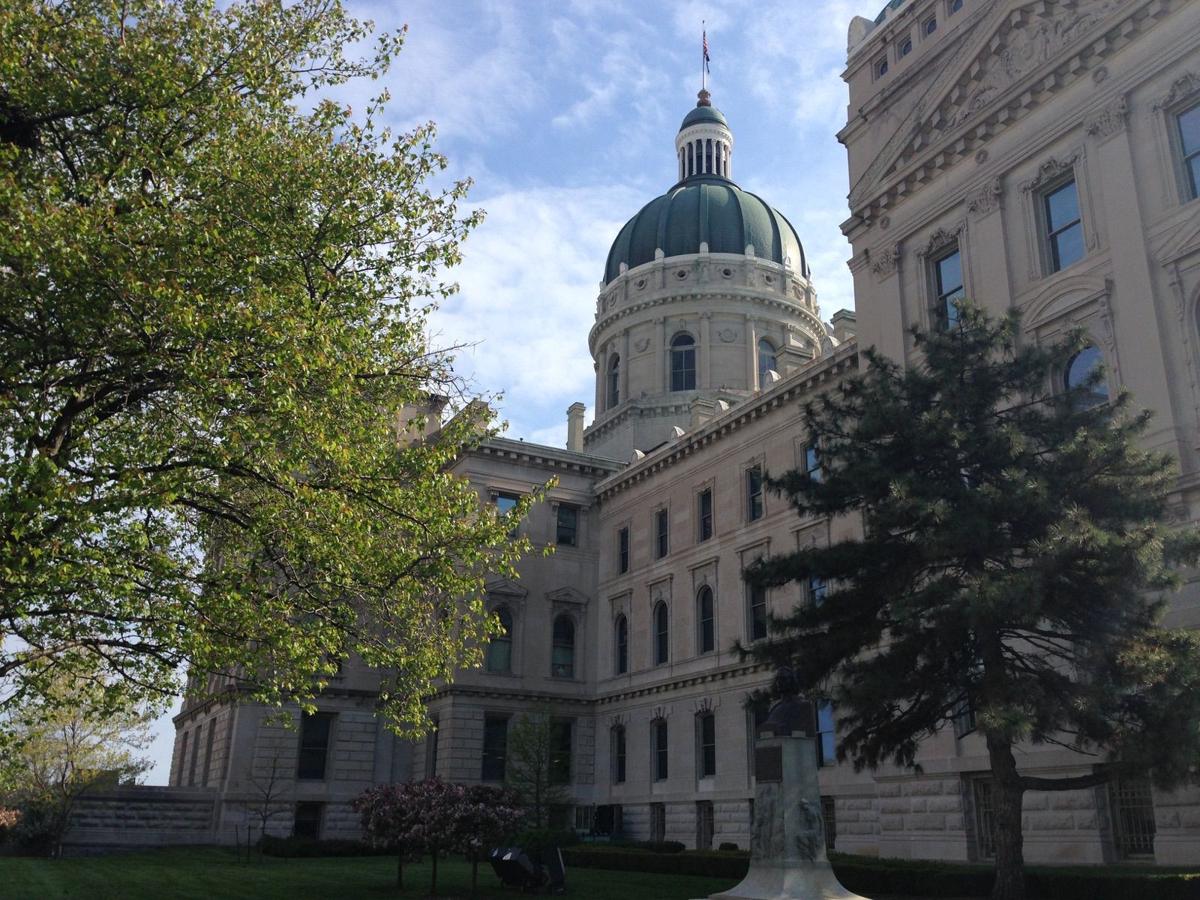 Members of the Indiana House and Senate meet at the Statehouse in Indianapolis.

An overwhelming majority of the new Indiana laws proposed by state representatives and senators in January already are dead for the year.

The Indiana General Assembly last week hit the midpoint of its 2020 session, where legislation that hasn't passed either the House or Senate no longer is eligible for consideration — absent some clever parliamentary maneuvers.

"Short sessions always go by so quickly," said Senate President Rod Bray, R-Martinsville. "But we feel like we've been pretty productive on some agenda items of both the House and Senate, and the governor's office."

Indeed, two measures already have advanced to the governor after winning quick approval by both Republican-controlled chambers, including a "hold harmless" for Indiana schools and teachers due to poor student performance on the new ILEARN standardized exam.

While educators generally are happy about Senate Enrolled Act 2, many also are disappointed the first new law signed this year by Republican Gov. Eric Holcomb did not include any state funding for teacher pay raises.

Instead, House Enrolled Act 1007 spends $291.2 million in unanticipated state revenue from the 2019 budget year to cash-fund construction projects at six state universities — none in Northwest Indiana — instead of borrowing money to pay for new and improved campus buildings.

"While I'm glad we will hold schools harmless from ILEARN test scores for this year and next year, I would like to remind folks that we have to do this because of the climate Republicans created for standardized testing in our state," said state Rep. Greg Porter, D-Indianapolis, the top Democrat on the budget-writing House Ways and Means Committee.

"The state Legislature needs to start listening to our educators when they tell us that they know what will work in their classrooms for their students, and we need to start putting teachers, students and schools first."

Meanwhile, both House and Senate Republicans are proud their efforts to improve health care pricing transparency and prevent surprise medical billing are winning broad support, thanks in part to state Sen. Ed Charbonneau, R-Valparaiso, the sponsor of Senate Bills 3 and 4 and House Bill 1004.

At the same time, Democratic attempts to further cut health care costs by allowing the importation of discount prescription drugs from Canada and legalizing medicinal marijuana have been rejected by Republicans.

"No one contended there was going to be a silver bullet that was going to cut health care prices in half in Indiana this year," said House Speaker Brian Bosma, R-Indianapolis. "We're taking the first step, I think, which is transparency to make that happen in the future."

"It's time for House Republicans to get serious in the second half of this session and take House Democrats' lead in taking meaningful action on these issues," GiaQuinta said.

One surprise of the first half was the Senate rejecting a proposal championed by the governor to require businesses with more than 15 employees to make reasonable accommodations for the needs of pregnant women, such as more frequent breaks or light duty tasks.

The Senate voted 34-15 on Feb. 3 to turn Senate Bill 342 into a call for a study committee on the need for pregnancy accommodations.

"This caucus wasn't really ready yet to adopt that idea. We want to look at it a little more closely," Bray said.

Bosma said he wished even more measures had failed to make it through the first half, especially in the Senate.

While he acknowledged every issue is important to someone, he believes the Senate sent the House "a lot of peripheral issues."

"We'll work through and try to winnow out the chaff and plant the wheat," Bosma said. "I'm sure we'll have a good discussion about what should proceed and what can wait until next year."

On its way to the Senate is a controversial energy proposal, sponsored by state Rep. Ed Soliday, R-Valparaiso, that critics claim will hike consumer electricity costs and slow the transition from coal to renewable energy sources in Indiana.

Soliday insists House Bill 1414 is focused on managing that transition by requiring the Indiana Utility Regulatory Commission be given advance notice of any power plant closings and hold a hearing on the reasonableness of any planned retirement, sale or transfer.

"Whether that's coal or rabbits on a treadmill, we need the lights to come on when we flip the switch," Soliday said prior to the 52-41 House vote to advance the measure. "We're in transition, and all we're asking is to be able to manage it."

In that same vein, both Bosma and Bray bristled at questions from reporters about whether legislative Republicans are sufficiently conservative after approving a ban on holding or using a telephone while driving (House Bill 1070) and boosting penalties on retailers selling tobacco or vaping products to anyone under age 21 (House Bill 1006).

"We're really doing well in the fiscal issues and employment issues, and we're trying to take a look at some of these other things, like where we stand in the world of Hoosier health compared to other states, and when you start to look at those things they don't look quite as conservative. But we're taking a look at them," Bray said.

The next key deadline at the Statehouse is Feb. 27, when legislation endorsed by one chamber must advance out of committee in the second chamber.

Proposals approved with identical language by the House and Senate then go to the governor to be signed into law or vetoed.

Or they'll head to a House-Senate conference committee if lawmakers still need to craft identical provisions that can win majority support in both chambers.

The Legislature is required by law to end its annual session no later than March 14. This year's adjournment is expected March 11.

Plan for pot possession summons, instead of arrest, endorsed by Lake County Council

The Lake County Council is calling on the Indiana Senate to approve legislation encouraging police to issue court summons for nonviolent misdemeanor crimes, instead of hauling the alleged perpetrators off to jail.

Delinquent property taxpayers could be excused from paying penalties, interest

The Indiana Senate has approved a property tax amnesty program that would waive the penalties and interest on unpaid property taxes for property owners who pay off their overdue obligations.

State senators agreed Tuesday to make up to $43.5 million available over the next 10 years to demolish abandoned school buildings in Gary and to repair the schools still in use.

The Indiana Senate wants women completing a pill-induced abortion to collect the fetal remains and bring them to a clinic or hospital for burial or cremation.

Senators want the Indiana Gaming Commission to adopt rules authorizing off-duty law enforcement officers to carry a handgun, either openly or concealed, while visiting a casino.

Griffith is halfway toward gaining additional options for completing its voter-approved exit from Calumet Township.

Indiana AG will not be taking over any county prosecutor offices

A controversial proposal to authorize Indiana's attorney general to go to court to prosecute any criminal law that a local, elected prosecutor is declining to enforce is dead.

Without the hold harmless, more than half the schools in the state would have received a D or F rating and numerous educators would be ineligible for performance pay awards that partially are linked to student test results.

Lead, copper testing may be on tap for water in Indiana schools

Every public school in Indiana may be required to have its water taps and fixtures tested for lead and copper contamination by 2023.

Indiana water utilities could get faster notification of industrial spills

The House voted to direct the state's Environmental Rules Board to rewrite its spill rules to provide "timely notification" when a spill "may cause a threat to the operation of a water utility or water treatment plant."

The Indiana House has endorsed legislation prohibiting drivers from using, or even holding, a mobile phone or similar device while their vehicle is in motion.

An Indiana Senate committee has killed a House-approved proposal to eliminate the state's 13 remaining township assessors, including the seven working in Northwest Indiana.

It's a test that could expand statewide and provide answers for a troubled, $180 million-a-year medical program for 40,000 inmates, officials said.

Senate Bill 365 would allow Griffith to become part of Ross Township should its efforts to join either North or St. John townships continue to be unsuccessful.

Educators and supporters hoist their custom signs during a November Red for Ed Action Day rally outside the Indiana Statehouse in Indianapolis.

Members of the Indiana House and Senate meet at the Statehouse in Indianapolis.