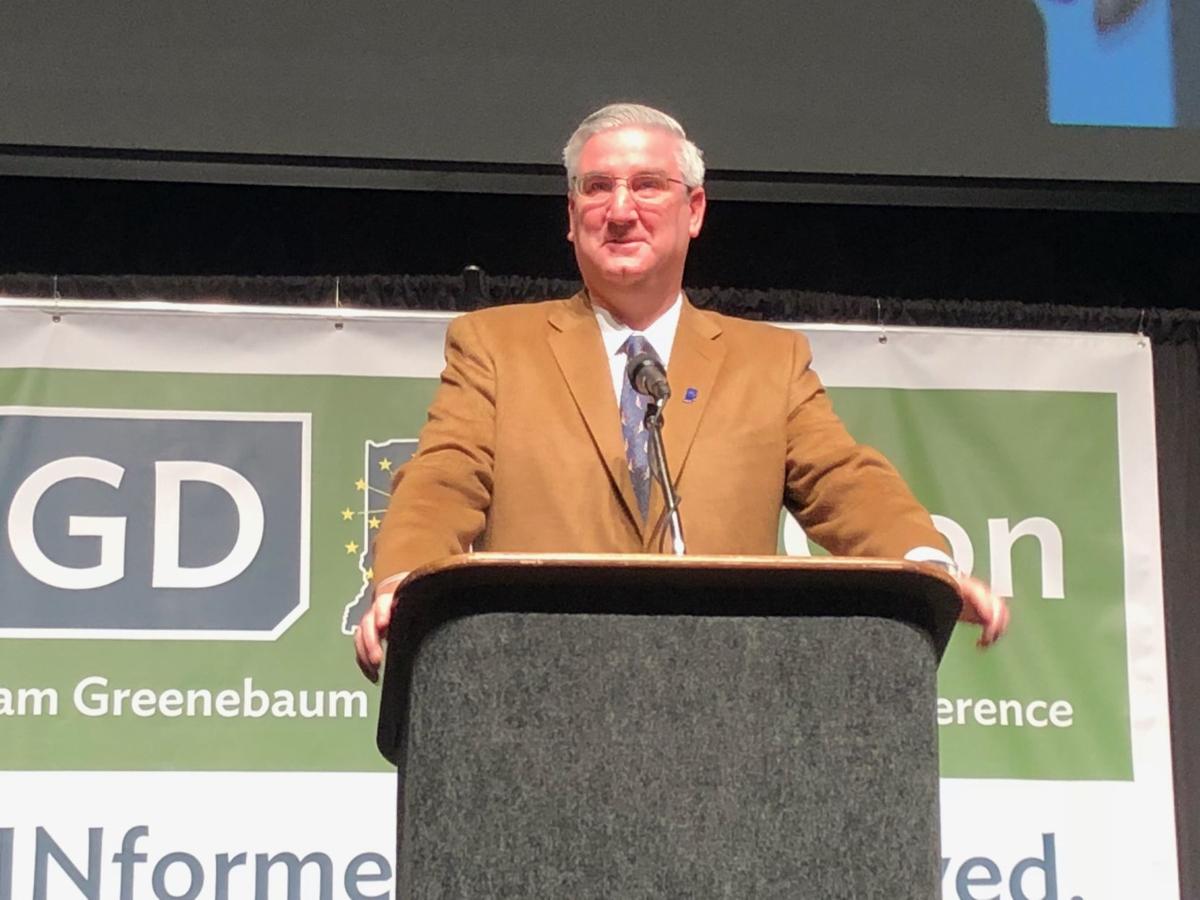 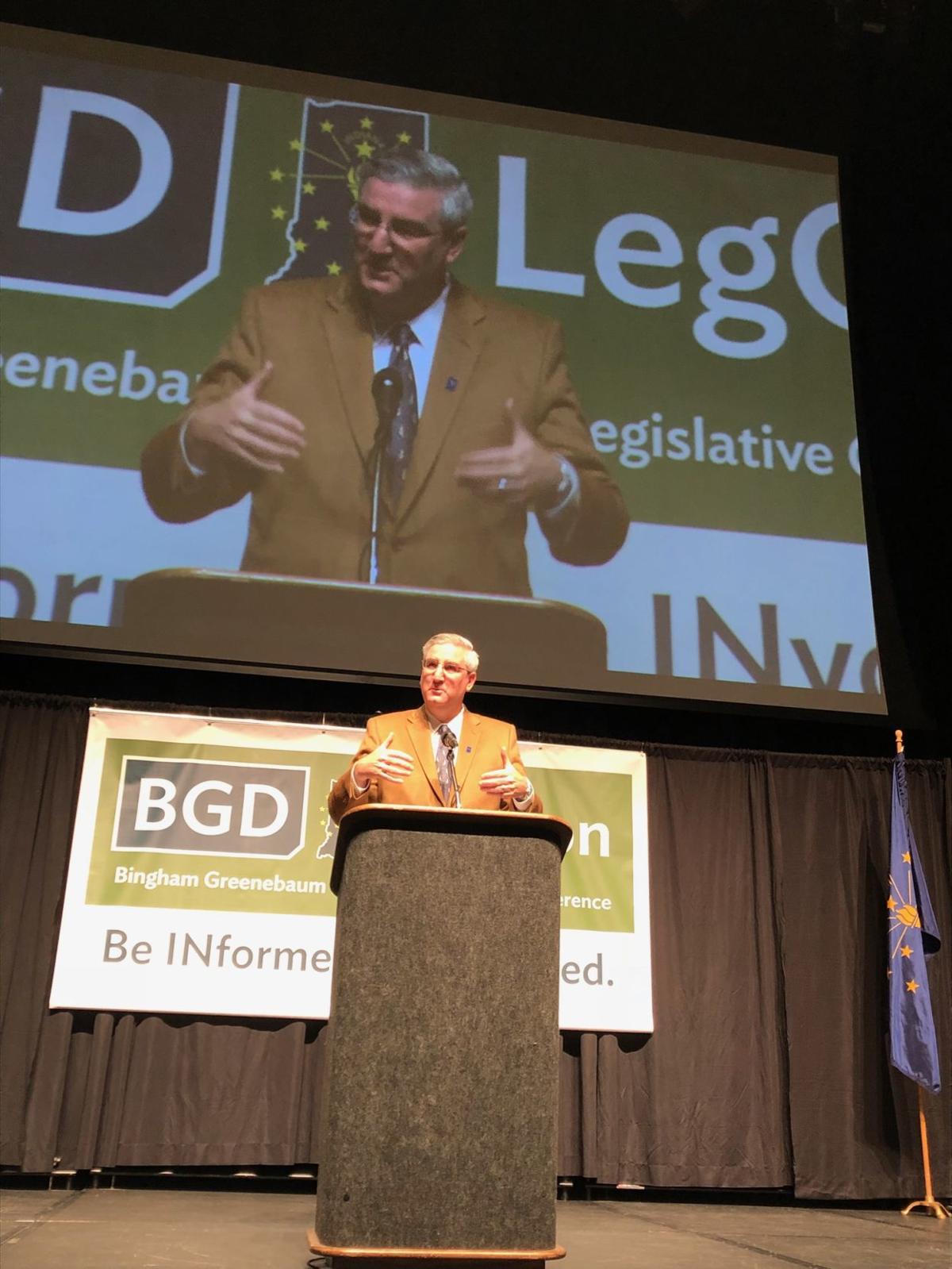 INDIANAPOLIS — Gov. Eric Holcomb is standing by his plan to postpone for up to four years state action that increases teacher wages, despite a warning this week from Indiana's largest teachers union that such a delay could prompt spring educator walkouts.

The Republican chief executive told participants Wednesday at the annual Bingham Greenebaum Doll Legislative Conference that there is "no silver bullet" for quickly hiking teacher salaries that lag behind many of Indiana's neighboring states and the national average.

Holcomb ruled out spending any portion of Indiana's approximately $1.8 billion budget reserve, since he said it would be financially irresponsible to spend one-time money for the ongoing expense of higher teacher salaries.

Instead, Holcomb insisted that state legislators and education stakeholders must work together over the next several years to "put together a framework and deliver some action steps that will significantly, significantly improve teacher pay."

"This is going to require a multibudget effort," Holcomb said. "We've got to identify hundreds of millions of dollars and the means to get it into teacher paychecks."

At the same time, Holcomb reiterated that he favors the Republican-controlled General Assembly next year increasing overall state support for elementary and high school education, a position he claims has been "somewhat mischaracterized in the last few days."

The governor did not specify precisely how much extra money the state should spend on kindergarten through 12th grade instructional costs.

He said that total largely will depend on how much new money Indiana can expect to take in over the next two years under the state revenue forecast due to be released Monday.

Regardless, Holcomb admitted that growing overall education spending has little impact on how much teachers are paid by local school corporations.

"We increase tuition support in nearly every budget, and teacher salaries don't increase appreciably," he said.

Already the $7.2 billion Indiana is spending this year on K-12 tuition support will have to grow by $144 million a year in the state's next two-year budget, or $288 million total, just to keep pace with the 2 percent national inflation rate.

But he said $286 million of that is needed to replace one-time funds spent over the past two years to cover unexpected costs at the Department of Child Services — potentially forcing spending cuts at other state agencies.

Some teachers next year also may see their wages shrink, instead of grow, as Holcomb's legislative agenda calls for eliminating pay-for-performance Teacher Appreciation Grants, and funneling some of that $30 million into a $500 state tax credit for teachers who spend their own money on school supplies.

Teresa Meredith, president of the Indiana State Teachers Association, said Monday that a multiyear study on increasing teacher wages is inadequate to meet the immediate needs of an education workforce that feels undervalued, especially as the state demands teachers take on additional duties to prepare Hoosier students for their careers.

"Elected leaders must do more to declare teacher compensation a priority in this session," Meredith said. "This issue can't wait. We expect action in 2019."

She hinted that if it appears the Legislature is not taking their pay concerns seriously, Indiana teachers may take direct action to secure higher wages similar to the school work stoppages seen earlier this year in other Republican-led states.

INDIANAPOLIS — Gov. Eric Holcomb isn't providing many specific details about what will be in his third "State of the State" address Tuesday night.

INDIANAPOLIS — Gov. Eric Holcomb set five "big goals" in his January State of the State address for bolstering specific adult education and wo…

INDIANAPOLIS — Some Hoosier legislators still are smarting over Gov. Eric Holcomb bypassing the General Assembly in deciding how to spend $1 b…