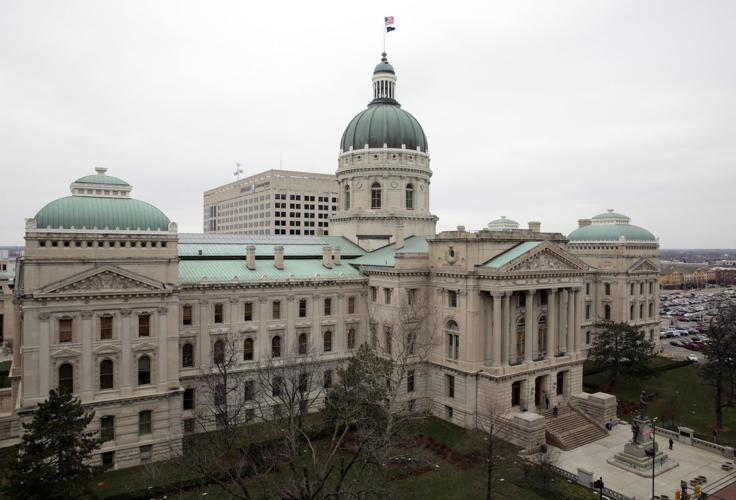 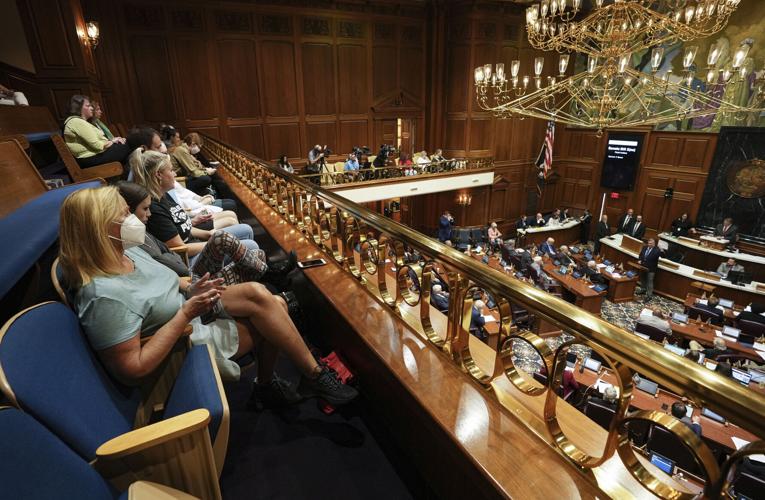 People watch from the gallery before a vote is held on Senate Bill 1 during a special session Friday at the Indiana Statehouse in Indianapolis. The bill bans abortions at zero weeks except in the cases of rape, incest or to protect the life of the pregnant person. 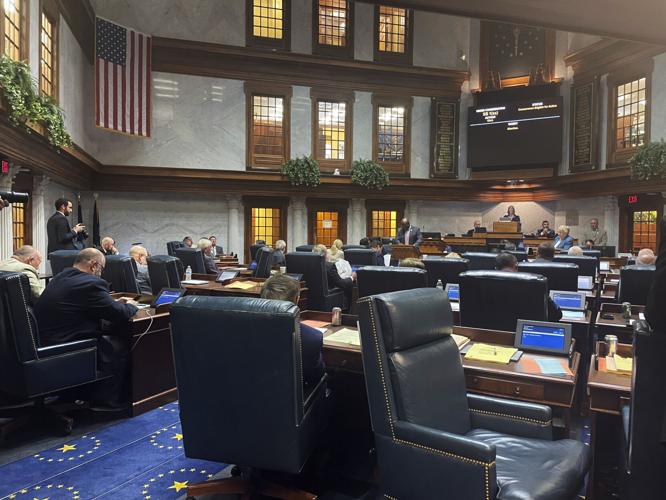 Senate Democratic Leader Greg Taylor, at podium just right of center, of Indianapolis, speaks to Indiana senators ahead of voting Friday to concur on a near-total abortion ban.

The government of Indiana is on the verge of mandating every Hoosier woman who becomes pregnant to carry the pregnancy to term and deliver a baby, unless the pregnancy involves a life-altering trauma.

It now is up to Republican Gov. Eric Holcomb to decide whether the near-total abortion ban crafted by the Legislature over the past two weeks will take effect Sept. 15.

The legislation prohibits all abortions in Indiana from the moment of conception, except within 10 weeks of fertilization for pregnancies caused by rape or incest, or 20 weeks if necessary to prevent serious physical impairment or the death of a pregnant woman, or because of a lethal fetal anomaly.

It also shuts down all abortion clinics in the state by requiring every abortion be completed in a hospital or hospital-owned surgical center, puts doctors at risk of losing their medical license if they fail to sufficiently justify the legal basis for an abortion, and sets the stage for Republican Attorney General Todd Rokita to some day overrule locally elected prosecutors and file criminal charges alleging an illegal abortion.

At the same time, the measure explicitly exempts in vitro fertilization programs from the restrictions on abortion and appears to leave intact current state laws relating to the availability of contraceptives and the ability of women to travel to other states to obtain an abortion.

The House vote in favor of the proposal followed more than four hours of debate that was, at times, passionate and emotional, but largely respectful, notwithstanding occasional shouts in opposition from the public gallery overlooking the chamber and continuous loud chanting against the measure from Hoosiers standing outside the chamber's rear windows in the Statehouse rotunda.

The Senate's more than three-hour debate over whether to concur with the House changes to the measure largely centered on whether denying nearly all women access to abortion is government overreach that infringes on the personal liberty of Hoosiers, which usually is well-guarded by state senators.

In the Senate, state Sen. Mike Bohacek, R-Michiana Shores, broke away from many of his fellow Republicans and joined all Region Democrats in voting no because he said the legislation does not address sexual assault involving disabled adults, including Hoosiers with Down syndrome.

The proposal was supported in the Senate by Northwest Indiana state Sens. Ed Charbonneau, R-Valparaiso, and Rick Niemeyer, R-Lowell.

Public opinion polls show a majority of Hoosiers oppose strict limits on abortion access. Nevertheless, the measure will end a half-century of pregnant Hoosier women having an individual choice to bring a child into the world or to terminate her pregnancy prior to fetal viability.

Supporters of the proposal estimate it will eradicate approximately 95% of abortions in the state. According to the Indiana Department of Health, there were 8,414 abortions in Indiana during the 2021 calendar year.

"Our goal through this legislation is to strengthen protections for the unborn while stepping up support for families," said state Rep. Wendy McNamara, R-Evansville, the sponsor and a LaPorte native. "It is consistent with our overall goal to care for mother and baby."

At least three Republicans, state Reps. John Jacob, R-Indianapolis, and Curt Nisly, R-Milford, and state Sen. Mike Young, R-Indianapolis, voted against the plan because it fails to prohibit all abortions by including unverified exceptions for rape, incest, and the life and health of a pregnant woman.

Jacob said in a post-Roe world it is "weak" and "pathetic" for Indiana lawmakers to fail to fulfill their repeated promises to Christian Hoosiers and Republican voters to entirely ban abortion if given the opportunity.

"This bill justifies the wicked, those murdering babies, and punishes the righteous, the pre-born human babies," Jacob said. "By continuing to regulate baby murder in this bill you are inviting the judgment of God on our state and on our nation."

"God will not bless a state that kills its children," he added.

On the other hand, several Democratic representatives observed Indiana stands to lose much more by denying women bodily autonomy and signaling to businesses that the state is willing to use the heavy hand of government to pick winners and losers on a divisive social issue.

"This is a sad day for our state," said state Rep. Carolyn Jackson, D-Hammond. "We are voting to take away the rights of Hoosier women to choose what happens with their bodies."

Jackson said if the measure becomes law Indiana will become a "wasteland" as OB/GYNs and other doctors flee the state, thousands of children are born each year to women who either don't want or can't afford them, and some women resort to unsafe abortions to terminate their pregnancies.

"Women, especially black women and low-income women, will die because of this bill," Jackson said. "It's cruel, it is unjust and it is downright despicable."

State Rep. Ragen Hatcher, D-Gary, noted in no other circumstance does the state control what happens to a person's body since individual consent is required to get a vaccine, donate blood or donate organs — even if needed to save a life.

"This bill tells women the moment they become pregnant that the fertilized egg that cannot live outside her body has more rights than she does," Hatcher said.

"Women are more than capable of making this decision on their own," Harris said.

Hoosiers interested in contacting Indiana Gov. Eric Holcomb to share their opinion on the abortion legislation awaiting his signature or veto can reach him three ways:

Email: By filling out the online form at in.gov/gov/ask-eric/ 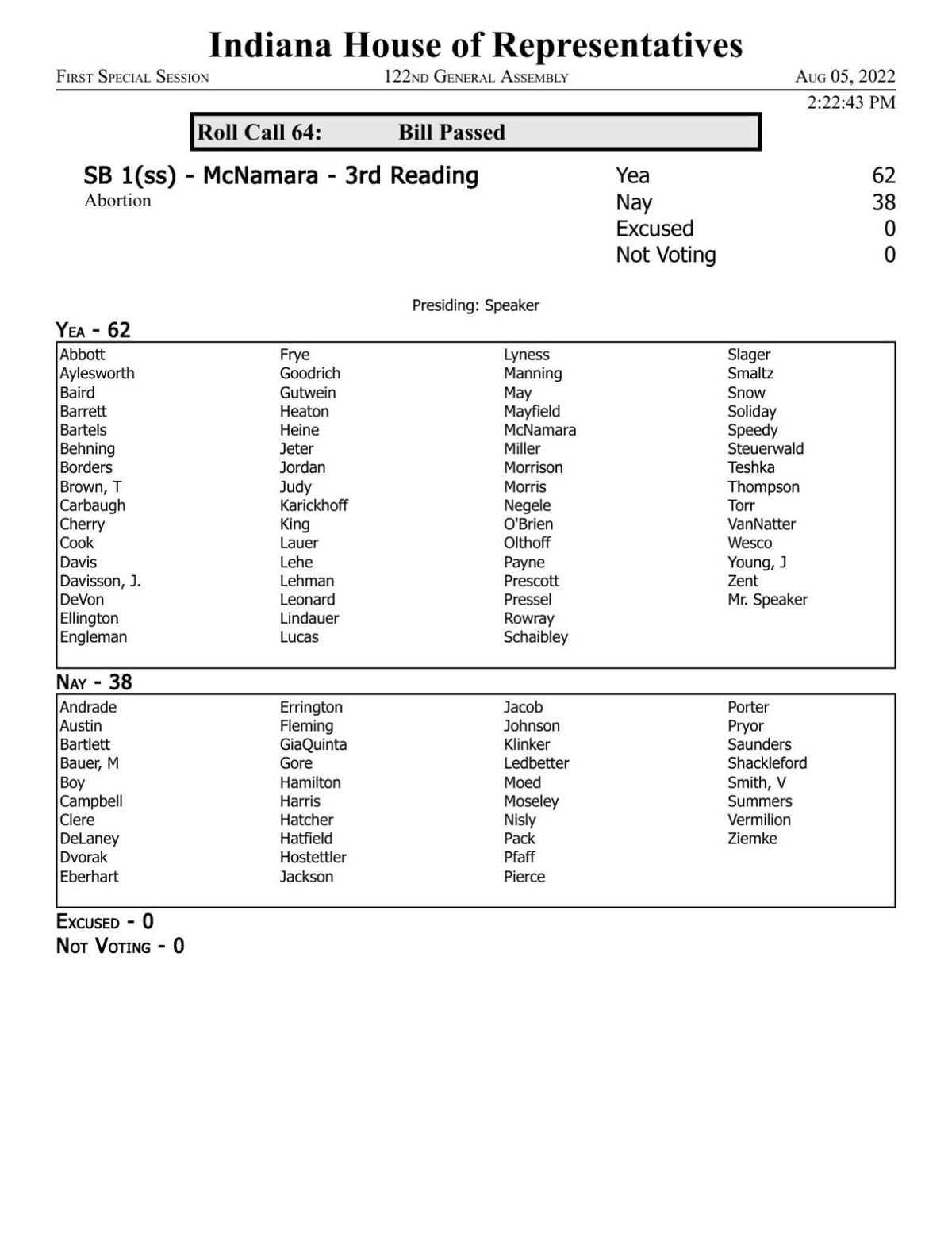 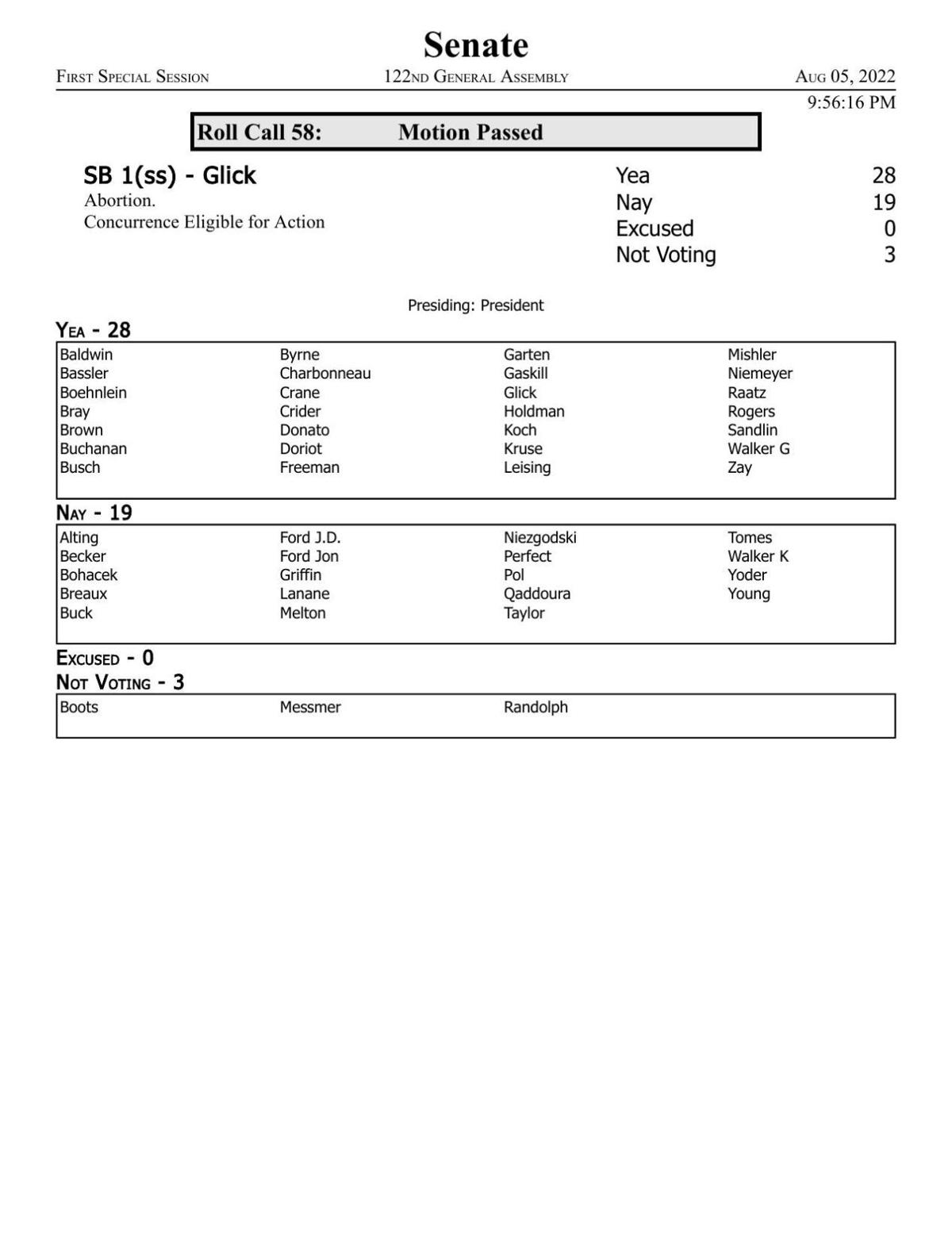 "I really believe this bill is where it needs to be. It's in a good place," said state Rep. Wendy McNamara, R-Evansville, a LaPorte native and sponsor of the legislation.

State Rep. Wendy McNamara, R-Evansville, chairwoman of the House Committee on Courts and Criminal Code, said the changes are "a thoughtful way forward" that "shows compassion for mothers and babies."

The House Committee on Public Health is scheduled to hear public testimony on the legislation at the Statehouse beginning at 8 a.m. Region time Tuesday.

The Republican Senate reluctantly agreed to advance a prohibition all abortions in the state, with limited exceptions for pregnancies caused by rape or incest, or when the life of the mother is at stake.

It's not clear whether Senate Bill 1 will reach the 26 votes required for approval, even though Republicans, who generally oppose abortion, control 39 seats in the 50-member chamber.

Thousands of people, including the vice president of the U.S., showed up at the Indiana Statehouse on Monday to make their voices heard as Hoosier lawmakers consider enacting a near-total abortion ban.

Women's access to abortion largely could be eliminated in Indiana as soon as mid-August under legislation unveiled Wednesday by Republican Senate leaders.

"Politicians are wading into an issue they are not smart enough to understand outside of their Washington talking points," said Ali Brown, a Portage native and Democratic city leader in Indianapolis.

Indiana is the first state to legislatively impose new abortion restrictions following the June 24 Dobbs v. Jackson ruling by the U.S. Supreme Court that rescinded the right to abortion.

"Given this new law, we will be forced to plan for more employment growth outside our home state," said Indianapolis-based pharmaceutical giant Eli Lilly and Co.

Police said Brett A. Lawson, 38, is 5 feet 10 inches tall, weighs 225 pounds, and has red hair and blue eyes. He also has a large tattoo on his right forearm.

The Indiana Department of Local Government Finance convened a public hearing Wednesday night following receipt of a taxpayer petition for state review of all the land values in Lake County.

This 'smart fabric' can contract and lift weight just like muscles

This 'smart fabric' can contract and lift weight just like muscles

All you need to know about classified information

All you need to know about classified information

People watch from the gallery before a vote is held on Senate Bill 1 during a special session Friday at the Indiana Statehouse in Indianapolis. The bill bans abortions at zero weeks except in the cases of rape, incest or to protect the life of the pregnant person.

Senate Democratic Leader Greg Taylor, at podium just right of center, of Indianapolis, speaks to Indiana senators ahead of voting Friday to concur on a near-total abortion ban.