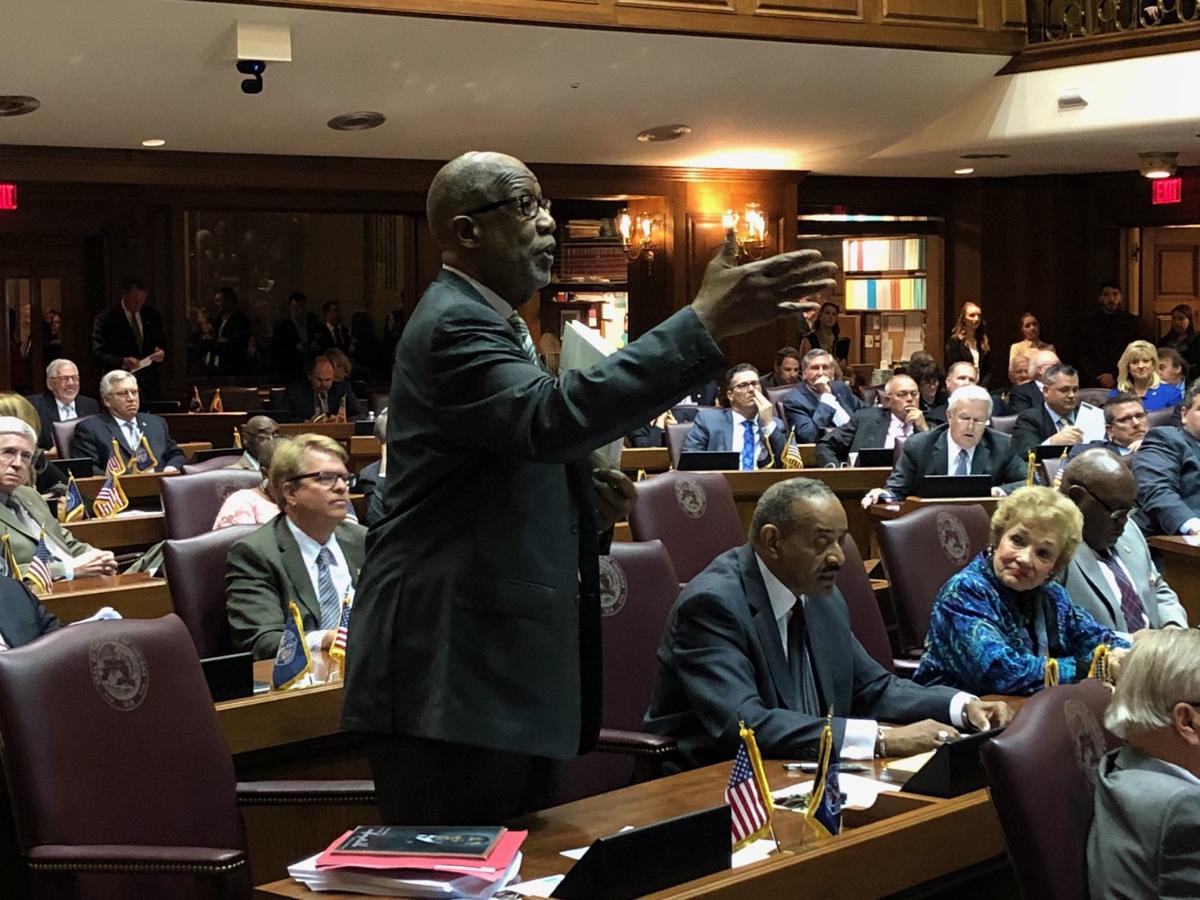 State Rep. Charlie Brown, D-Gary, in the Indiana House Monday attempts to offer legislation to increase the state's cigarette tax as a way to reduce smoking rates. He was not allowed to submit his proposal under the House rules adopted for the one-day special session of the General Assembly. 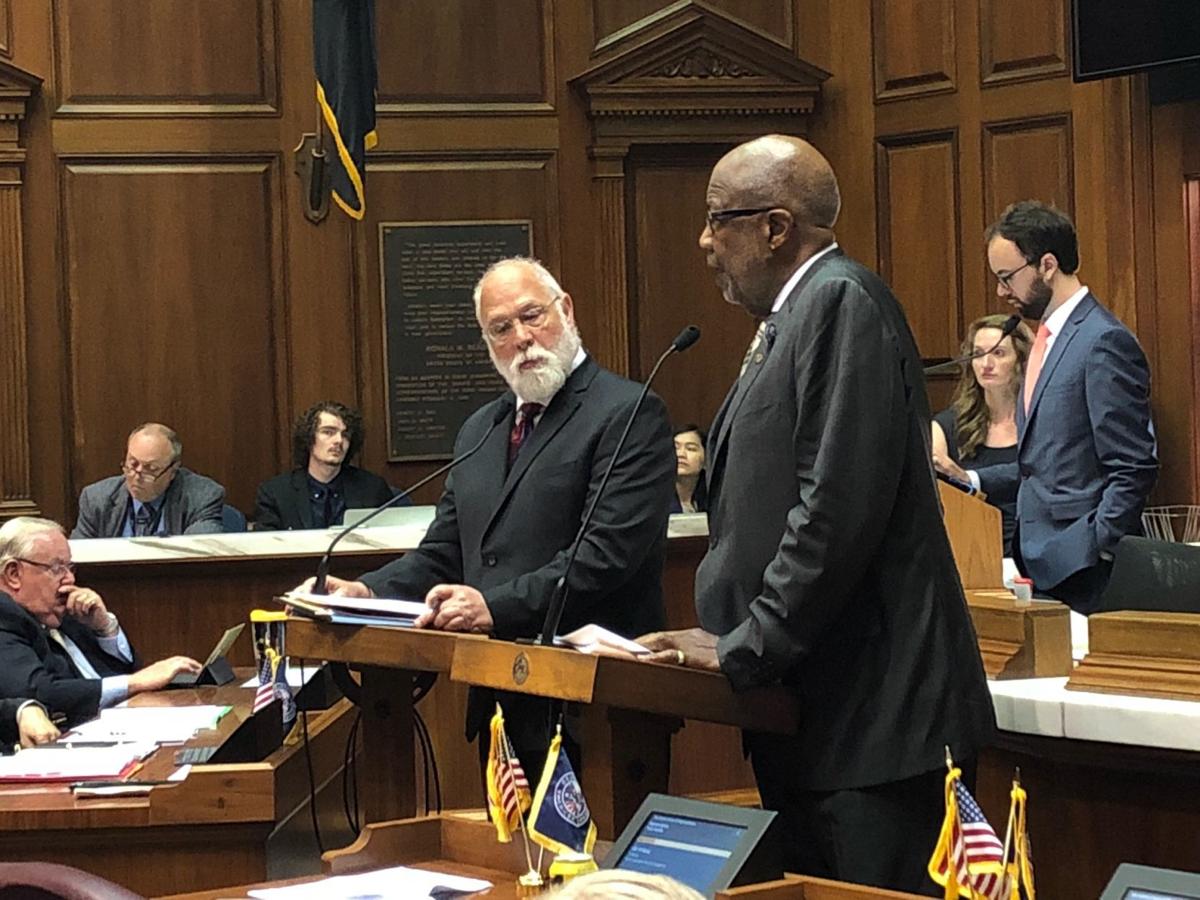 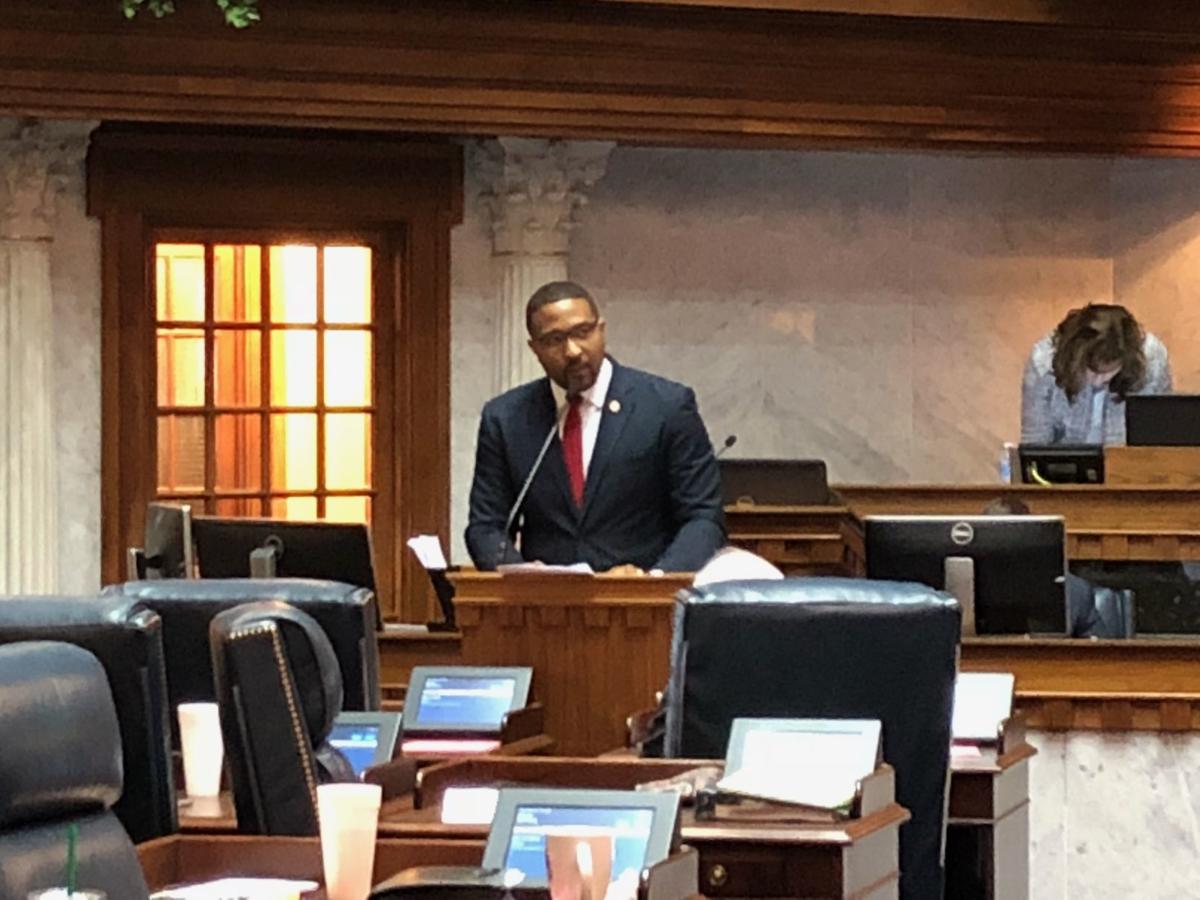 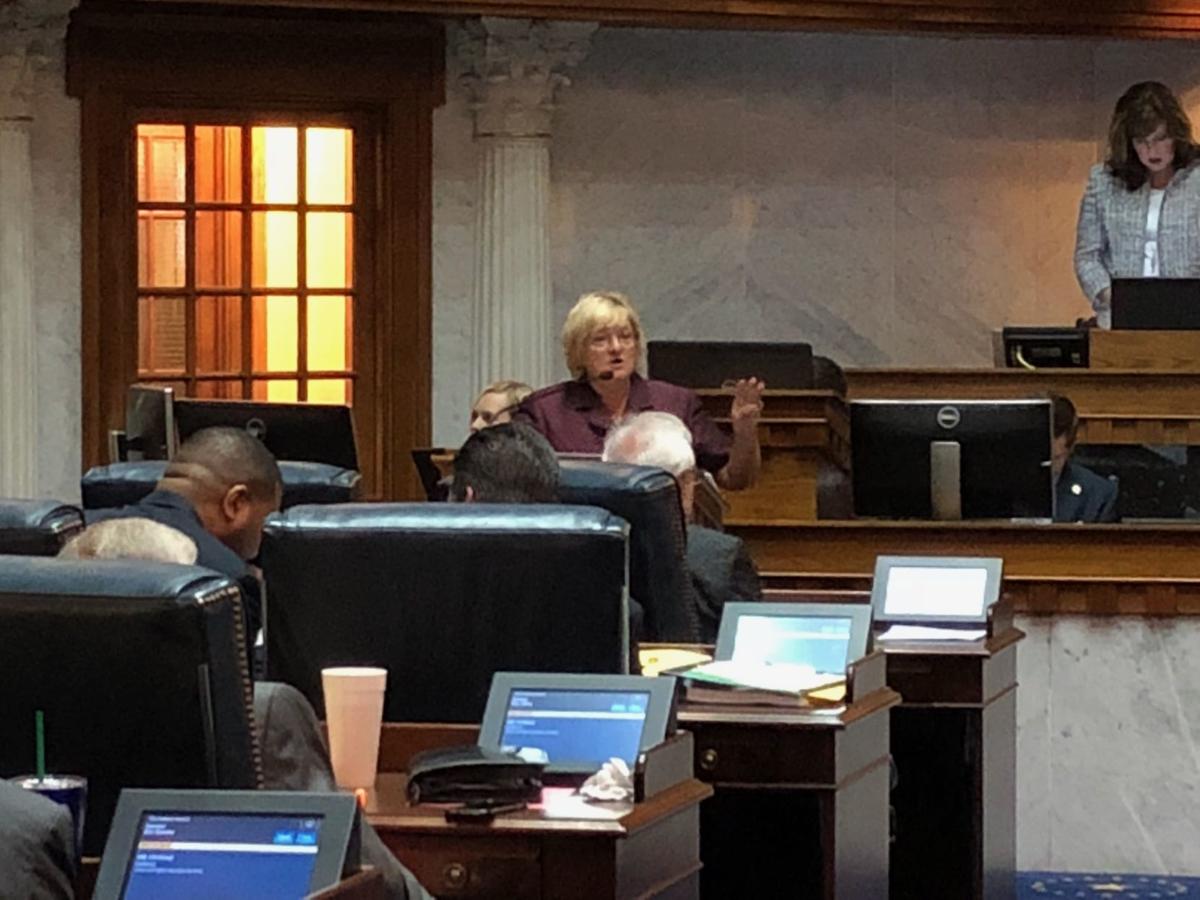 State Sen. Karen Tallian, D-Ogden Dunes, announces Monday in the Indiana Senate that she will be voting against all five proposals under consideration during the General Assembly's special session because she objects to rules precluding committee hearings and amendments. 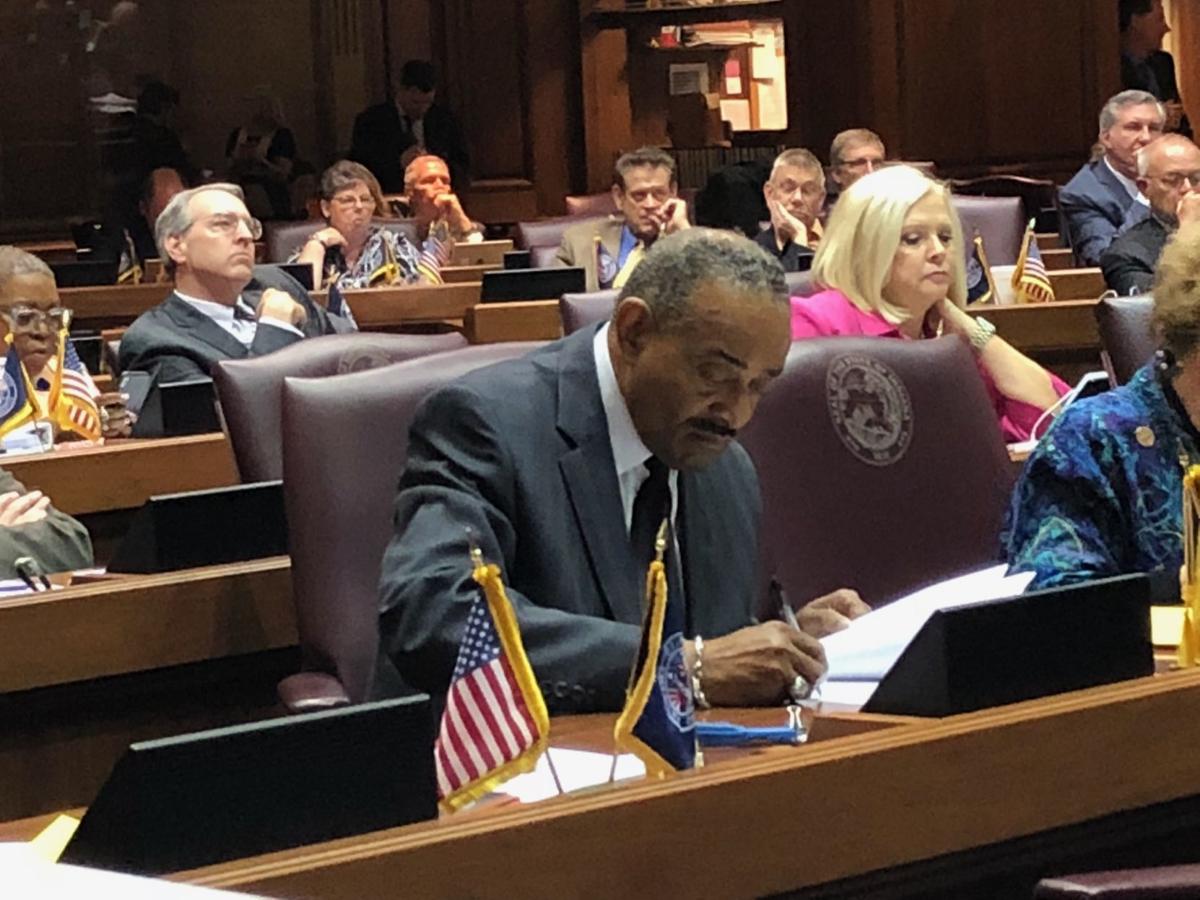 INDIANAPOLIS — The trustees of the Gary Community School Corp., who last year were supplanted by a state-appointed emergency manager after repeatedly failing to balance the district's budget and racking up more than $100 million in debt, will see their role even further reduced beginning July 1.

On Monday, the Republican-controlled Indiana General Assembly — meeting in special session — overwhelmingly approved House Enrolled Act 1315, making the elected Gary school board merely an advisory body for Emergency Manager Peggy Hinckley to consult when she sees fit, and limiting the board to four public meetings a year.

The measure, which Republican Gov. Eric Holcomb has signed into law, also puts Ball State University in charge of operating the similarly distressed Muncie Community Schools, and creates a financial indicators program to, ideally, prevent any other cash-strapped school districts from coming under direct state control.

State Sen. Ryan Mishler, R-Bremen, sponsor of the legislation, said clarifying that the emergency manager is the Gary school district's governing entity, in lieu of the school board, ensures her early progress in right-sizing the district's spending will continue.

"While it may be unpopular, I think it's necessary for us to help turn this school around so we can have that economic development up there. ... This will benefit Gary, and it will benefit the entire state."

Legislators representing the Steel City strongly argued against the proposal, despite its limited scope compared to last year's Senate Enrolled Act 567 that handed control of the district to an emergency manager.

State Rep. Vernon Smith, D-Gary, proclaimed in a 49-minute speech that the new legislation was "an attack" on the people of Gary because "one or two" school board members dared to question the decisions being made by the emergency manager, who he described as "a benevolent dictator."

"After we do this, she doesn't have to deal with resistance anymore," Smith said. "This bill threatens freedom."

"This is all too punitive, especially in light of 567," Brown said. "We just enacted that last year, and we haven't allowed enough time to see the successes or the failures of 567 to come back with additional changes in the law and the authority of the school corporation."

"We're setting a very dangerous precedent. Yes, it is Gary now, and it is Muncie now. But it could be you tomorrow."

State Sen. Eddie Melton, D-Gary, who is black, said that while he's never experienced racism from his overwhelmingly white Senate colleagues, it's impossible to ignore the racial undertones of legislation that's focused on a primarily black city.

"So when the majority of a minority community calls out policies that appear to infringe upon our rights — don't ignore that. Because we have the history to back our story up."

Notwithstanding similar passionate arguments by state Sen. Lonnie Randolph, D-East Chicago, the House voted 63-30 for the measure, and the Senate approved it, 34-14.

Hoosier lawmakers were able to get their work done Monday in a single day because they adopted procedures waiving the usual requirement that legislation be considered on three separate days in each chamber.

Those procedures, however, also denied representatives and senators the opportunity to suggest revisions to any of the five measures or offer additional proposals on other topics.

On what likely was his final day in the House, Brown tried to submit legislation increasing the state's cigarette tax as a way to reduce smoking rates — a cause long-championed by the 36-year representative who is running for county office this year instead of re-election.

Across the rotunda, state Sen. Karen Tallian, D-Ogden Dunes, voted "no" on all five measures in protest of the Senate's rule prohibiting amendments, as well as in response to the governor's claim that an emergency necessitated immediate approval of the legislation without additional public hearings.

"We're just called down here to be quiet and vote. ... This is not the way to do business."

INDIANAPOLIS — The state is making handheld metal detectors available at no cost to every Indiana public, charter and private school that requ…

INDIANAPOLIS — The state has ordered 3,228 hand-held metal detectors for delivery in August to the 369 school corporations, charter schools an…

INDIANAPOLIS — State Sen. Eddie Melton, D-Gary, last week was elected to a one-year term on the 63-member executive committee of the National …

Holcomb implements some recommendations of his school safety task force, leaves others for General Assembly

INDIANAPOLIS — Gov. Eric Holcomb is immediately implementing four of the 18 recommendations of his school safety task force, while leaving to …

State to evaluate financial condition of every Indiana school district

GARY — Veteran Region educator Peggy Hinckley, who has led the emergency management team at the Gary Community School Corp. for its first 16 m…

INDIANAPOLIS — Former state Rep. Charlie Brown, D-Gary, this year may have traded his Indiana House seat for a spot on the Lake County Council…

INDIANAPOLIS — State Sen. Eddie Melton, D-Gary, believes it is "wrong" for Statehouse Republicans to revive a proposal in the upcoming special…

UPDATE: Reduced role for Gary School Board on agenda when Indiana General Assembly convenes May 14 for special session

INDIANAPOLIS — Gov. Eric Holcomb is calling Hoosier lawmakers back to the Statehouse May 14 for a special session focused on approving proposa…

State Rep. Charlie Brown, D-Gary, in the Indiana House Monday attempts to offer legislation to increase the state's cigarette tax as a way to reduce smoking rates. He was not allowed to submit his proposal under the House rules adopted for the one-day special session of the General Assembly.

State Sen. Karen Tallian, D-Ogden Dunes, announces Monday in the Indiana Senate that she will be voting against all five proposals under consideration during the General Assembly's special session because she objects to rules precluding committee hearings and amendments.